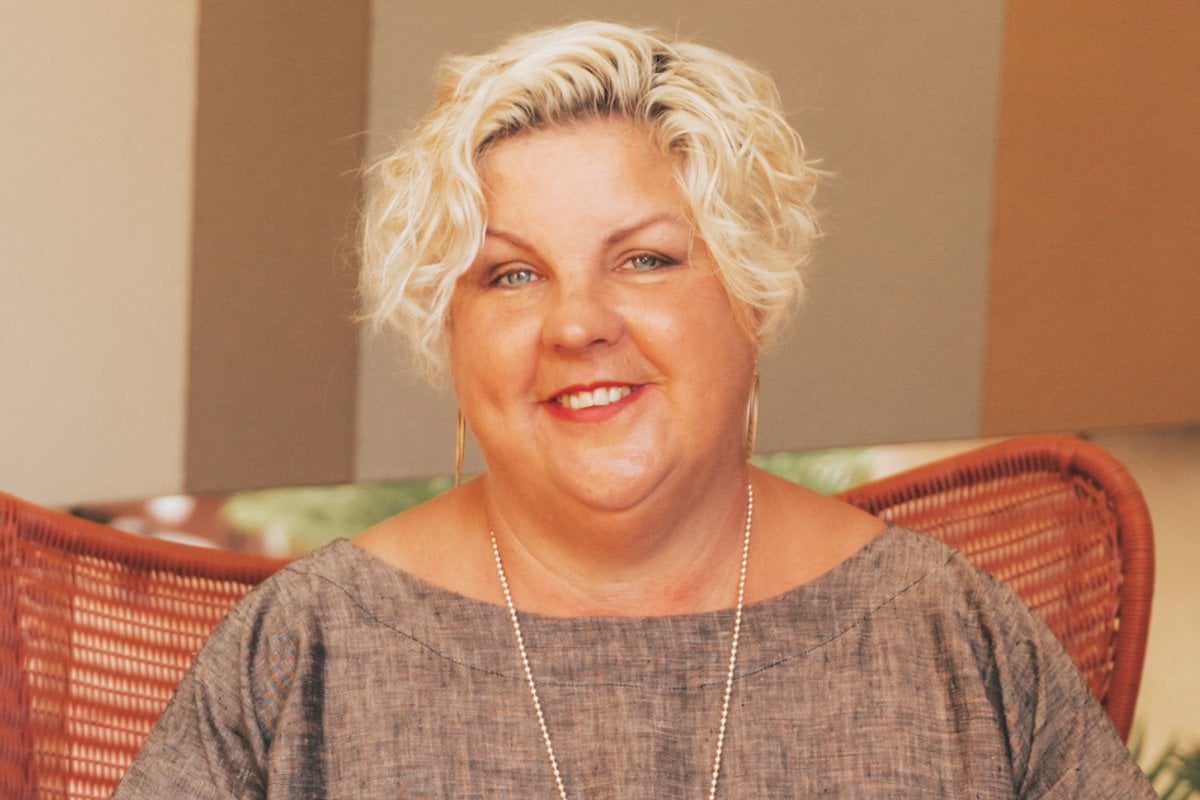 Cathy Baker is a wife, mum to four boys and the Principal of Belle Property on the New South Wales Central Coast.

Her days are spent overseeing more than 30 employees and selling some of the most expensive houses in the coastal region.

But years before she reached that point, Cathy was on the brink of losing her own home.

After studying interior design, Cathy started working alongside her husband, Michael, at his commercial building company. As she explained to Mamamia, it was years later, in 2009, that their lives turned upside down.

"We did a major commercial project for a guy who [we didn't know] was a professional crook," she said. "And halfway through the job, he decided to liquidate his business, leaving us a million dollars in debt."

Cathy and her husband were left with unpaid tradespeople and forced to continue the job to avoid penalties. That was, until the money stopped altogether.

"As it got further into the project, he closed everything down and left us in a state," she said.

The couple were forced to take their children out of private school, and Cathy knew she had to find another way to make money.

"I just sat down, knowing that we were risking losing our home, and put together a 10-year plan of what I wanted my life to look like," she shared.

"I was really just doing it out of desperation, [thinking] how can I save some money here and there? And what can I do to try and change this?"

After years of organising school fundraisers at her children's school, a friend, who knew that Cathy had unenrolled her kids, offered her a job in real estate.

"I didn't know anything about real estate, but I just knew I needed to use the opportunity," she said.

Cathy worked her way up the ladder.

"I started as a receptionist on the front desk, then I was quickly moved into a role called the customer relations manager," she said. "Then from there, I came into the role of a sales associate, gradually proving myself in that role, and then became a sales agent."

After four years in real estate, Cathy made her first million in commission fees and became the company's sales agent of the year.

But while Cathy's path to success sounds fast, it took hard work, a plan, and surrounding herself with the right people.

"The biggest thing that I did when I came into the industry was acknowledge that I didn't know anything about it," she said.

"And in order to fast track, I needed to find the best people in the industry that I could use as my mentor. So I had five mentors and one coach, that held me accountable to achieving what I wanted to achieve," she said.

"Each week I'd report to them; 'This is what I've done, what should I have done differently? How can I learn from this? What could I do better?'

"I've pretty much stuck to that plan for the last 10 years. Because I knew if I did, then [it would] work because I've got the best people I need. All I needed to do was follow the plan."

And the hard work paid off.

"Over the last 10 years, we've [Cathy and her husband] both been able to work several jobs and get our lives to the stage where we've paid back that debt, also paid off our homes, grown our businesses and helped our boys go back to school and through uni," she said.