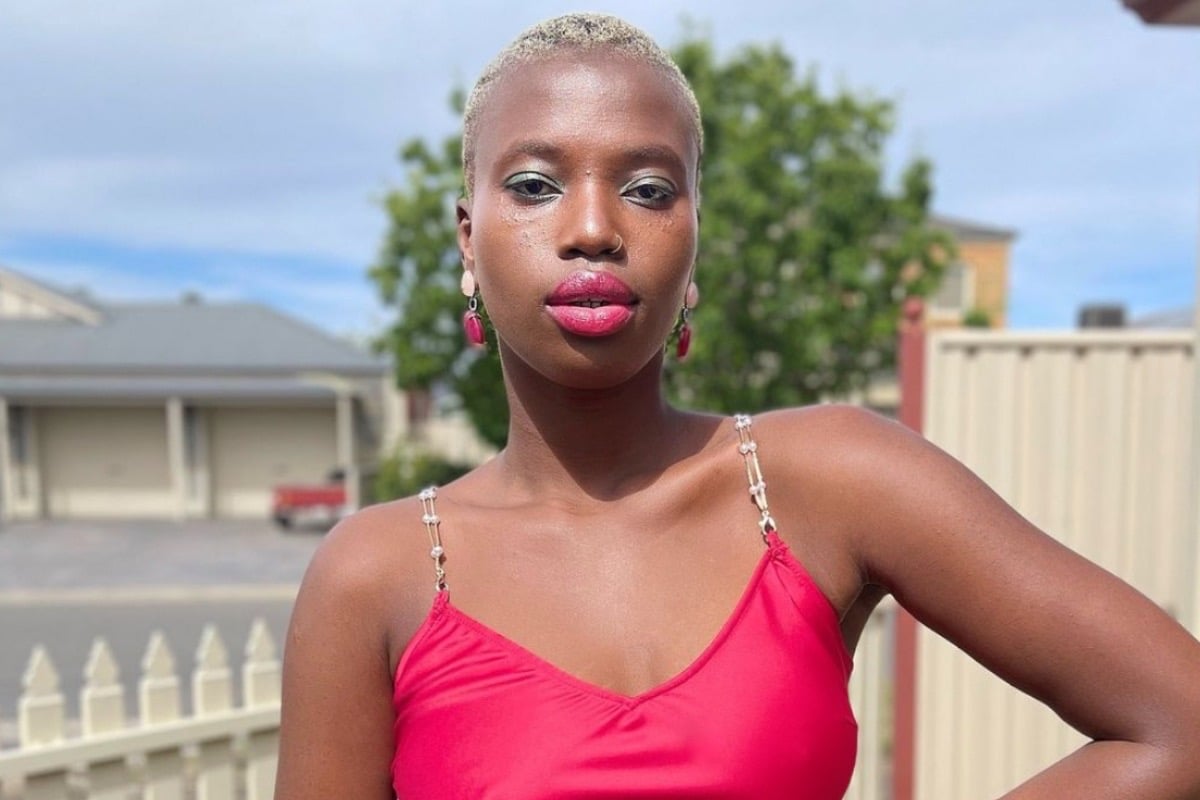 What is your purpose in life?

For Khadija Gbla, an award-winning human rights activist, keynote speaker and single mum, her purpose in life is to work on educating the world so no young girl has to experience what she did.

When Khadija was a little girl, she was forced to undergo an inhumane act: female genital mutilation.

Khadija was born in Sierra Leone and at the age of three, she and her family became refugees, settling in Gambia.

"It was at this place that my mum made the decision that I needed to be subjected to what is globally known as female genital mutilation (FGM). She took me to a remote part of Gambia and paid an older lady to use her knife to cut off my clitoris and labia minora lips: in the name of 'purity' and in the name of controlling my sexuality," she said on Mamamia's podcast Restart with Madeleine West.

Watch: An insight into female genital mutilation. Post continues below.

Reflecting on the archaic practice and the warped thinking behind it, Khadija says it all comes back to the patriarchy.

"To them, I am not deserving of having control over my body. The patriarchy decided that to be a good girl or good woman, they needed to have their genitals mutilated so men can have control over the woman's body. A woman's body is a commodity in some cultures because if you are a virgin then you get a larger dowry and you can get a 'better' partner to marry."

Listen to this episode of Restart - where Khadija is interviewed. Post continues after audio.

It wasn't until Khadija arrived in Australia as a refugee at the age of 13 in 2001, that she realised what had happened to her was not okay.

Some may think FGM only happens in other parts of the world. But in Australia, the conservative estimate of FGM survivors nationally is over 200,000. Khadija is one of them.

Even more sobering is the fact that approximately 11 girls are at risk of FGM in Australia each day, according to No FGM Australia.

"It's a global battle: the battle to fight for women's rights, autonomy, bodies and our pleasure," Khadija noted on Restart.

The impacts of FGM are far-reaching, from physical health consequences to mental health struggles. As Khadija said: "They're lucky if they don't bleed to death, they can suffer infertility, incontinence, Post Traumatic Stress Disorder, infections, and sometimes even the transmission of HIV and Hepatitis B if the FGM is done in a group setting [without sterilisation]."

Not to mention the impact it has on a woman being able to receive sexual pleasure. Simply put: there is not a single benefit to FGM.

And even after dealing with the trauma associated with FGM, Khadija also experienced discrimination, racism, sexism and mountains of stigma when she arrived in Australia. As she wrote in an article for Mamamia previously:

"In 'white' Australia, I was too black. But my community thought I wasn't black enough and that I needed to know my place. I was too loud, outspoken and empowered to be a 'good, agreeable' African woman, and yet backwards stereotypes about violence and lawlessness dissed my culture. Stuck between a rock and a hard place, finding my voice and navigating leadership as a young woman of colour was challenging," she shared.

So when asked by Madeleine West on Restart, 'what is your purpose in life?', Khadija said that is the simplest question to answer: to support the 200,000+ survivors of FGM who live in Australia and make the world a better place for all women. She has done that through advocacy work, founding the Desert Flower Centre and also a TED Talk she gave in 2015 titled: 'My mother’s strange definition of empowerment'.

"I founded the Desert Flower Centre two years ago, and that's my baby in Adelaide. The goal of that was to provide reconstructive non-surgical trauma-informed care free of charge to those survivors. And it's the first of its kind in the Asia Pacific region, not just in Australia. We're talking about Malaysia, Indonesia and Singapore, where FGM is actually legal and you have billboards promoting it for cheap. That's what I am up against," she said.

FGM is a form of child abuse. And just like domestic and family violence and sexual assault, Khadija feels that by breaking the silence, we can take back some of the power.

"That silence and shame should be put where it belongs - on the cowards who do these things. When we as a community at the dinner table talk about bodily autonomy to our kids, we are empowering them. It's about lifting up everyone, the women, the men and everyone who identifies somewhere in the spectrum," she shared.

When she was young, Khadija wanted to be a doctor. But she soon learned that healing can come in many forms and shapes.

"Little Khadija became the healer, just in a different way. When I stood on that TED Talk stage and spoke to three million people globally, to have them listen and for me to say 'this is my story' [is powerful]. I stood to ensure our voices are heard and that people don't turn their eyes away," she concluded.

"I am going to make sure there's no more little Khadijas out there who have to face what I've been through. I want this to end with me. I am going to do everything to ensure it stops. This is about ensuring that I want to live in a world where FGM is not a reality. It's as simple as that."

To keep up with Khadija, you can follow her on Instagram @khadija_gbla and for more information, you can visit her website. She has also recently organised a flood relief campaign that is assisting all who are affected, including local Indigenous communities: if you would like to contribute to the GoFundMe, click here.