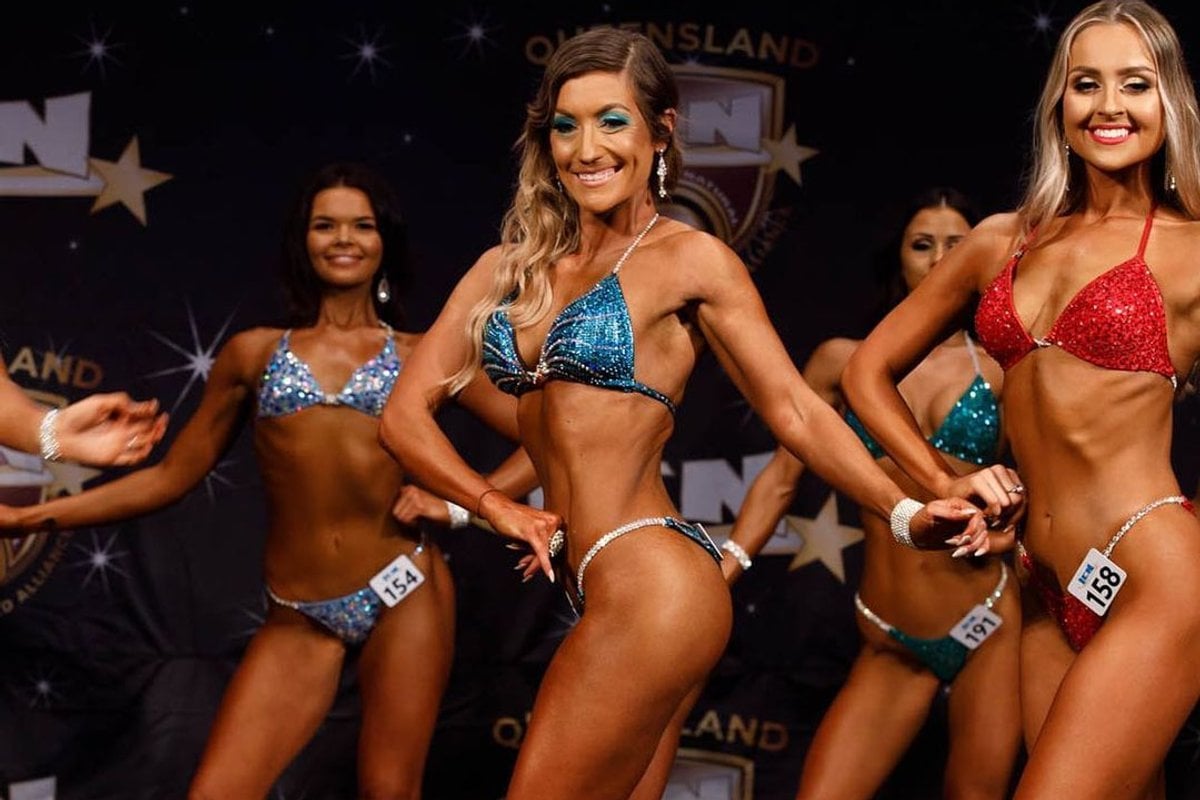 Look, let’s be honest, if the last couple of years were a partner - this would be the point at which you’d pack their stuff in boxes and dump it on the kerb.

To say it’s been less than enjoyable is the understatement of the century.

Naturally, being the type of person who enjoys swimming against the tide and deliberately making things harder for myself (see: herding cats), I rejected the iso-baking trend and instead decided to use the pandemic lockdown to get in the best shape of my life, by becoming a competitive bodybuilder.

Watch: Scientific happiness hacks you can try. Post continues below.

When I decided to bite the bullet and get serious about bodybuilding, I had already run a half-marathon on The Great Wall of China, jumped off the third highest bungy platform in the world in New Zealand, and braved the freezing waters of Slovenia to go canyoning.

Call me crazy (and many do), but it seemed like the logical next step in my search for adrenaline. I was drawn to the discipline and the routine of bodybuilding, and after being bed-bound in my early thirties with a nasty bout of chronic fatigue, I also wanted to see what the ol’ bod was capable of.

I enlisted the help of a PT and a dietician and assumed after several months of slugging it out I would be not only carb-deprived and shredded but also filled with an enormous sense of achievement.

What I wasn't counting on was the backlash from people I didn't know, the judgements online, and the bitchy comments from strangers at the coffee shop about my new body shape.

Preparation for this competition was completely next level (duh, right?).

My workouts went from “a little bit of this, a little bit of that”, to structured weight sessions five to six times a week, split into different muscle groups - usually two days of legs, and three days of upper body, including one session with my trainer.

When the gyms were shut, I worked out at home, or outside.

All my workouts were logged and recorded on an app and I also had step goals to reach on the daily - as we got closer and closer to competition season the steps were increased and the calories were decreased to keep my body shredding fat, to expose the muscle underneath.

All my food was also weighed and logged, broken down into macronutrients (carb, fat and protein), the specifics tweaked week-to-week as necessary.

I was weighed and had skin folds taken regularly to help my team track emerging trends and ensure I brought the best package to stage.

It was hectic (again, duh).

Most nights I went to bed at 7pm and was up at 3am to head to work for a full shift.

I’d go straight from work to the gym at midday to get my weights session in, followed by a walk to get my steps in, before heading home to prep all my meals for the following day. Repeat forever.

It was a gruelling schedule, and pretty isolating for the super social.

No more Friday drinks, no more partaking in family pizza night, no more eating leftover chips from my boyfriend’s plate. It was mentally one of the toughest things I’ve ever done - I honestly loved it though.

When I finally hit the stage, I felt an amazing sense of pride in what I’d managed to achieve, in just six short months. What I wasn’t prepared for was the backlash I received along the way.

While it sucked having to explain myself over and over to people (this is for a competition, I’m doing this under the supervision of a dietician and a personal trainer, please don’t try this by yourself) - it actually made me realise how we as a society have a really warped view of food and body size.

We live in this bizarre paradox where we put people with impossible body standards up on a pedestal, and yet tear down anyone who dares to actually achieve them.

On the flip side, we shame those who're carrying extra kilos by often excluding larger body types from the narratives we see in advertising, television or movies.

I thought once I had achieved the dimensions of a so-called "perfect body" life would be peachy and I would be able to ride off into the sunset after dumping all my years of emotional body baggage in a bin somewhere.

The reality is now I've picked up everybody else's emotional refuse and to be honest there's not enough room in my (newly shredded) saddlebags to carry it all.

I lost count of the number of times I had people roll their eyes at me and say, "Oh, I could NEVER do that - I have too much of a social life," or "Wow, you have to weigh all your food? That seems crazy restrictive," or my personal favourite - "OMG ewwww are you going to be one of those super tanned chicks who look like men?".

All passive aggressive, all super-loaded and all reflecting a sense of self-loathing that has absolutely nothing to do with me. Why must we tear down what we don't understand?

The funny thing is, despite all my preconceived notions of what it would be like to be a super ripped bodybuilder - it didn’t really change anything for me except for the reactions I received from others.

It didn’t make me prettier, sexier, or better at poaching eggs (side note: if you CAN poach eggs, please DM me).

I still had the same insecurities as before, I still looked awful in orange and I still couldn’t spell necessary without the help of a dictionary.

Also, it’s important to note that bodybuilders don’t maintain stage physique all year round, once the comp is over, we reverse back out (slowly increasing calories and gaining weight) and use the off season to build more muscle and eat heaps of pancakes.

Before this, I used to get intimidated going to the gym for fear that the fit people would gather together after I had left to draw a mind map of all the dumb things I'd done (once a few months back I accidentally poked a guy in the actual butthole with one of the sticks of the single leg press, as he was bending over in front of me. Mortifying. But I digress).

Despite what Instagram would have you believe there is no dress-size related Nirvana beyond the next carrot stick, because confidence is not about what you see, it's about how you feel about yourself. It's part of the wonderful messiness that makes us human.

So let's just be kind to one another, yeah?

Reply
Upvote
I think it's so refreshing to hear someone say that when they reached their goal they still had insecurities about how they look. Thanks so much for sharing!
C
cap'nsquinty 17 days ago

Reply
Upvote
1 upvotes
Can we stop taking offence at different opinions? I've used the pandemic years to reshape my wardrobe into 1950s Doris Day outfits - lots of judgmental comments there - but I don't complain or expect others to understand, I just enjoy!

Reply
Upvote
@cap'nsquinty no judgement here, that sounds really fun! I follow a couple of vintage sewing/style  accounts on Insta, and I love seeing people just go all in on something that they love.
C
cap'nsquinty 16 days ago