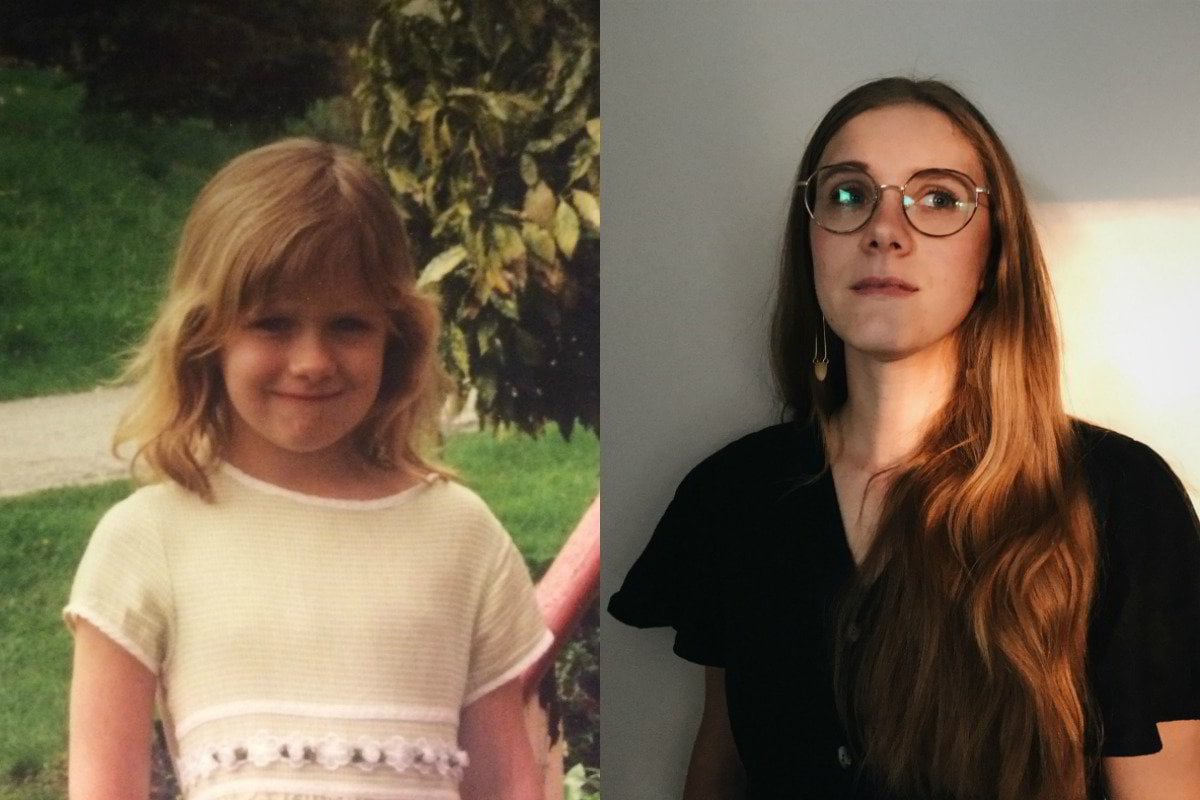 For most of my life, I’ve been disappointed to be living in a female body. It has only seemed like a test I could never pass.

For context, I’m cis-gendered, white, and heterosexual. I don’t speak for the full, vibrant spectrum of female experience. I can only speak for myself: a gal born in the early 90s, raised in a small town in a culture of Evangelical Christianity.

Growing up, I learned that a female body must be precisely managed, like the gardens at a royal palace. It must be reined in, covered up, controlled, or altered. This was in contrast to the freedom male bodies seemed to have. A female body was not desirable to look at in its natural state, never mind what it was like to live inside it.

There were unspoken rules about which areas of flesh could be exposed, and it was more than just the obvious bits. Any visible décolletage, torso or thigh was a problem. The combination of these rules with the garments available to teenage girls in the late 90s and early 2000s made buying clothes a nightmare. Everything was either too tight or too loose, too long or too short. Sometimes things were too sheer; the sun might shine through and betray one's anatomy. But why these sections of skin were different from the rest was not clear.

I had no idea about predators until I was in my early twenties, and I don’t think that’s the only thing these precautions were for. The modesty I grew up with was about policing the flesh because the flesh was a danger to everyone. The acceptability of a female body was based not its truth or its function, but on how it conformed to cultural expectations and how well it could be hidden.

I was expected to modestly hide my body yet strangers, acquaintances and family members could comment on it.

No one asked me about my interests. They’d just talk about my clothes, hair, and weight.

As I got a bit older, I found out that actually all of my skin was a problem. I needed to correct its imperfections with makeup.

Discolouration and pimples were a sign of a sloppy, undesirable female. For years, I applied thick concealers and creams even though I hated the feeling. I was too afraid of what people would think of the natural pigmentation of my skin.

Makeup is all right if you apply it for yourself or as a creative expression. But if you’re applying it out of fear, I wonder: is living in fear of the world seeing your own skin healthy?

Really, I learned that any marks on the female body were a problem. Scars and stretch marks must be covered up. Tattoos made a woman gross or trashy.

Hair must be managed too, of course. And it was not just the hairs on my head that I had to blow dry and flat iron into submission.

Quickly, I found out this was not the case, but the confusion remained. What made these hairs different and what was wrong with the others?

Boobs were maybe the biggest problem of all, which is ironic since I’m barely a B cup. Roughly 14 years into daily bra wearing and I’m still not 100 per cent sure why I’m doing it. For one, I don’t have much to hold up. Secondly, everyone knows a woman has breasts and nipples. But when I was growing up even letting a bra strap show would have been a movement towards indecency.

I wouldn’t have wanted a bra strap showing anyway because I had only utilitarian (i.e. ugly and uncomfortable) bras for years. Pretty underthings, it seemed, weren’t for the wearer but for a viewer, which I mustn’t have.

Menstruation was the final straw. It proved my body was, in fact, out to get me.

In addition to everything else I was already doing, I now had to make sure my body didn’t leak bright red fluids everywhere.

And mustn’t admit to the pain either. Periods could not be spoken of and their ways were a mystery. For a week out of every month, I lived in fear whilst out in public.

Oh and thinness. I’ve not mentioned it yet because that was a given. Only thin bodies were beautiful.

There seemed to be one right way of living in a female body, and it was a narrow path. It was all about how the body looked; how it could be consumed, visually.

Through puberty into adulthood, I did my best to abide by the unspoken rules, making myself smaller and more hidden.

Then I realised there were other sorts of women walking around who lived by other rules. Sometimes they didn’t shave their armpits or legs and sometimes they didn’t wear bras. Some of them had tattoos and only wore makeup when they felt like it. In their dress, they prioritised comfort and practicality.

These were women who were using their bodies for doing rather than making them an object to be looked at. They were farming, building things, hiking, rock climbing, foraging, starting businesses, making ceramics, and hand dyeing. The beauty was in the function of their bodies. In the sweat, the tan lines, the scratches, the dirt, the muscles, the indigo stained fingertips. They made me realise that the worth of a female body wasn’t decided by the viewer, but by the woman herself. She could do with her body what she pleased because it belonged to her, and she could do amazing, difficult things.

There also were many varieties of human experience that I had no idea existed until I was well into adulthood. Life as anything but a “normal” woman (there is no such thing) was unfathomable to me, and I found that path hard enough. So I tip my hat to any and all who do not conform to what the world expects. I wish I had been able to learn from you long ago.

Because the truth is there is no one right way to be in a female body—or any sort of body—and anyone who tells you otherwise is likely gaining something from the false promises of perfection. So ignore them. First, you are human. The beauty is in who you are.

For more from Ema Hegberg, find her here.

Reply
Upvote
Although I wasn't brought up in a religious household, I can relate to a lot of what you've said. I was a teenager in the late 60's and 70's. The messages then were mixed too : be sexy, but not too sexy, or you'd be labelled a slut; be a nice girl, but not too nice a girl, or you'd be labelled a prude or frigid. And the worst critics of girls were other girls. You could never trust girl friends, because they'd so easily turn into mean girls. I grew up in an abusive household, which made things even harder. My father also often commented negatively on my appearance. I hated it how so many people thought it was their right to comment on and judge my face, hair, and body parts. I was very thin, but I had no so called thin privilege. People aimed harsh words at me constantly: I was "too thin", "flat chested", "didn't eat enough", would "never get a boyfriend" because of my "flat chest". When I had a few pimples, my dad laughingly called me "PIMPLE" in Dutch. I felt constantly humiliated for being myself. I never ever want to be a teenager again.
T
tyigoa 2 years ago