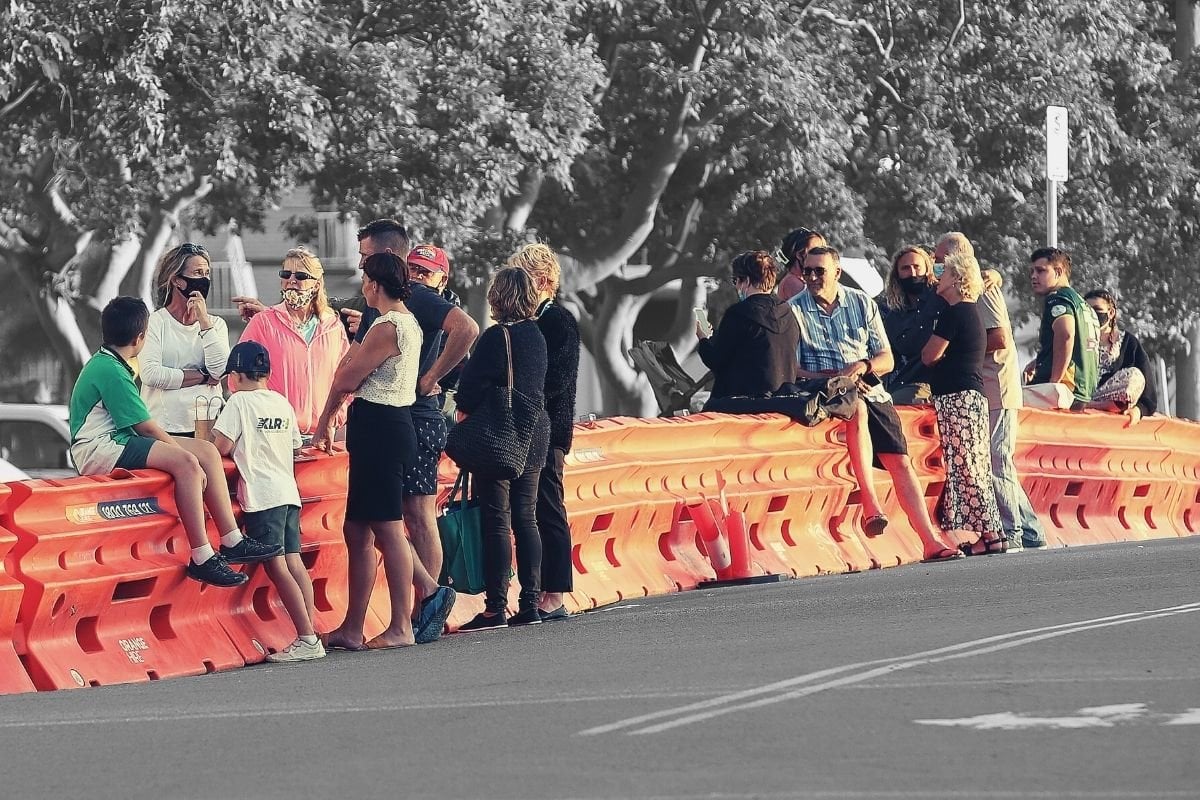 I've spent a lot of time being angry during this Delta wave.

Angry at the botched vaccine rollout and failure by our government to not set up a better system to replace hotel quarantine.

Angry at protesters and anti-vaxxers and those who refuse to social distance and stay at home.

Angry at our state and territory leaders for their constant squabbling over domestic borders.

Read: A message to Australia's state leaders: Read the room.

But looking at the Father's Day border reunion of hundreds of people (most without a mask) having picnics, exchanging presents and hugging their Dad over a giant orange barricade separating NSW from Queensland, I didn't feel anger. I just felt overwhelming sadness.

It was a curious reaction for me, because there was a lot to be angry about that scene. The 'angry' spoke on Twitter at length about how irresponsible and selfish it was. About the fact that it could be responsible for a super spreader event. About how Queensland might end up back in lockdown thanks to the Father's Day rule bending.

But I couldn't see past the heartbroken families trying to celebrate and create some kind of normalcy amongst the monotony of this fatiguing pandemic.

Father’s Day in 2021. Families split by the border meet at plastic barriers to celebrate. Hundreds of people lined up along the road, some have tables and chairs @10NewsFirst @10NewsFirstQLD pic.twitter.com/THtAtBy6EL

Families separated by the QLD/NSW border gather at the barricades to snatch a few Father's day moments together @abcnews @abcbrisbane @abcsydney pic.twitter.com/xySkjlBa6c

What I saw were families split by the "Great Wall of Coolangatta" hoping to feel whole again, even just for a present exchange or a brief picnic over a neon fence.

This weekend the state emerged from a two-week pause on interstate arrivals, but the borders have been shut since July, and the exemption process to enter is among the toughest in the country.

While NSW has abandoned COVID-zero as its goal, Queensland has not. And they're doing their best to keep the virus out of the Sunshine State via strict border measures.

Measures that saw a three-year-old stuck at his grandparent's house in NSW for two months, unable to return home to his parents in Queensland.

#BREAKING: Three-year-old Memphis has just reunited with his parents in Brisbane, after being granted an exemption to return home to Queensland from NSW. #9News

Measures that saw a cancer patient unable to get back to QLD for treatment after attending her mother's funeral in NSW.

A cancer patient stuck in NSW for weeks after attending her mother’s funeral has labelled Queensland’s border exemption for NRL WAGS as “morally wrong.”https://t.co/OQPVw65Ghe

Measures that saw about 100 people, including NRL officials, wives, girlfriends and children of players arriving from Sydney, while hundreds of Australians were denied entry for arguably much more pressing matters.

Australia isn't meant to be a country divided. We are one country, not eight. Our families and friends and businesses extend beyond our state or territory.

For the communities of Tweed Heads and Coolangatta that's even more true when you realise one side of the road is Queensland and the other side is New South Wales. It's not like it's in the middle of nowhere, there are trees and buildings on one side, and over the wall it continues on. Those affected have been crying out for the border to be at least temporarily shifted, to allow them to create a more workable bubble.

"Nobody with a heart could look at what happened yesterday and not think that something has to be done and urgently," Tweed Heads Mayor Chris Cherry told the Today Show.

"These are our families' lives that are being affected like this. I know people are suffering all over the state and I don't want to take anything away from that, people are hurting everywhere, but this is an area that hasn't had COVID for more than 12 months."

The ABC reports police on foot walked both sides of the border on Sunday, handing out masks and asking for social distancing but wishing everyone a happy Father's Day. They didn't move people along, despite New South Wales being in a statewide lockdown.

I was angry when I saw the protesters on the border a few weeks back demanding 'freedom' and refusing vaccines. There was a man on a horse that made me particularly irate.

FYI, I'm talking about this guy....post continues after video.

But these people weren't marching. Or demanding. Or refusing the science. They were just bending the rules so they could see their dad in person. They might've seen that the Queensland government bent the rules for NRL families recently and thought: "stuff it. They got to bend the rules, why can't we?"

It was, in some ways, a silent protest. The impact of which will hopefully make its way into not just the offices of Annastacia Palaszkcuk and Gladys Berejiklian, but every one of our state and territory leaders.

This constant bickering and 'stateriotism' is causing more pain and angst in Australia than the virus for a lot of families, and there needs to be a more uniform, humane approach to this conversation.

Right now it's just one premier spitting vitriol at the other while declaring things like "We don't want to end up like Sydney!"

But it is immovable rhetoric like that which results in stories like this from The Age - 'Sydney woman automatically denied visit to dying mother in WA.'

While we know stories of separation are common, seeing 200-odd people gathered for a 'celebration' with their loved ones in the middle of a cordoned off street demonstrated a surreal, sad reality.

And that was just one border. One small group of people. 'Border bubbles' or lack thereof are causing major headaches for communities up and down this country.

A further tightening of rules to the New South Wales and Victoria border bubble has seen eight communities ejected.https://t.co/5cEyeaIM25

While it's of the utmost importance that we first prioritise the safety of our communities and the availabilities of our crippled hospital systems as we fight Delta with a largely unvaccinated population, surely Father's Day showed us that the current border bickering needs a re-think.

Most Australians are happy to abide by lockdowns and border closures and vaccine mandates. They are an important part of the current fight against Delta as we race to vaccinate more of the nation. But there has to be a more humane, more workable exemption system between our states and territories.

There needs to a change in the rules for border towns.

There needs to be a united plan to get us back to one Australia - a plan that our leaders can show compassion towards as Australians, not just state-leaders.

Because quite frankly, seeing families eating Christmas lunch balanced on an orange border wall as NRL players and celebrities continue to skate past the 'rules' might just be enough to break Australia.

Let this be our wake-up call.

Reply
Upvote
My anger wasn't with the people - except for the fact they weren't wearing masks. My anger was directed towards whoever condoned the 'street party'. The issue isn't borders and whether they should be imposed. The issue is all NSW is under stay at home restrictions.  We haven't had any cases in my region since the beginning of 2020. We're vaccinated. We still comply with the regulations. We haven't seen our children or grandchildren for 5months, but we don't attempt to 'bend the rules', because if everybody 'bends' them, we'll all be staying at home for a lot longer.

Reply
Upvote
2 upvotes
I think this is conflating two issues. Theres no doubt that more exemptions need to be granted- keeping a child away from his family is absurd and cruel, as is denying exemptions for medical care. But people meeting over the border for fathers day is just reckless.

Reply
Upvote
@cat I agree. But I do think there is missing info here. Around 1000 NSW border residents are cared for by Qld health every week for cancer treatments and chronic conditions and presumably emergencies. I don't see how the people mentioned in this article are unable to get exemptions unless they have fallen through the cracks. Which is not ok, of course, but I do wonder about what hasn't been thoroughly investigated.

Reply
Upvote
@katp fair point, there was a lot of drama last year when that poor lady lost her child & people thought she had been prevented from crossing the border to get to hospital. But apparently people will be denied exemptions for (non-emergency) medical treatment if they haven't already started it in Qld, which is a bit cruel if you need chemo & live in northern NSW and have to go to Sydney.