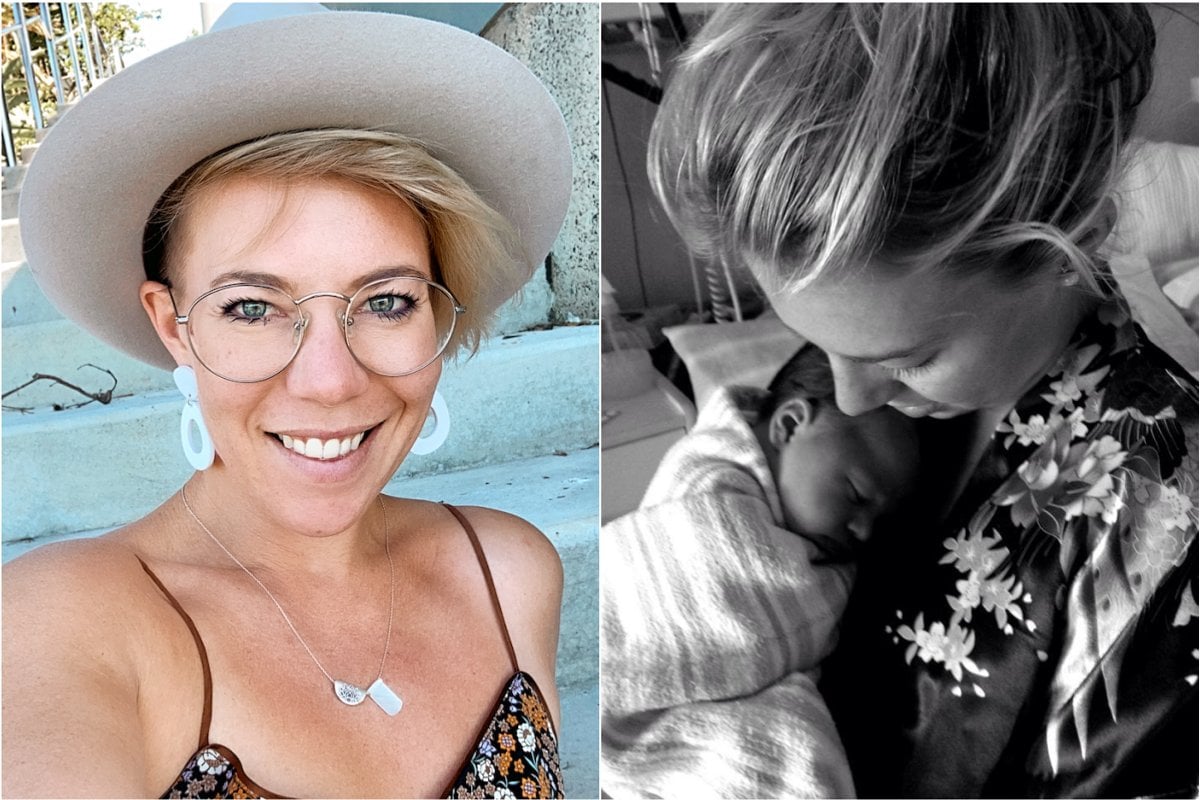 My daughter Millie’s incredible, 2.5 hour labour was nothing short of bliss.

The only moment when I doubted whether I would get through it was about an hour in, while in the shower at home.

As I lay there on the floor, the hot water suddenly ran out and a huge wave of nausea hit me. I barely made it out of the shower to throw up in the sink.

That’s when I knew I had made it to the other side. She was coming.

Watch the trailer for Mamamia's new podcast, The Delivery Room. Post continues below.

It was 10 steps from the bathroom to the front door, and my husband Nick was packing the car with everything we might or might not need, ready to make a run for the birthing centre.

I managed to get to the car, just as an almighty, wild howl escaped me. She was coming right now! And she was coming fast.

Our neighbours later revealed that they were sure I’d had our baby right there and then.

Nick wrestled me into the front passenger seat, and we sped off as I fought through every wave to hold Millie in.

"Feathers Darling, FEATHERS!" he said (if you have done Calm Birthing classes, you will know what ‘Feathers’ means.)

I could feel the anxiety in his voice as he drove towards the birthing centre, while I clung to the passenger seat facing backwards. My little girl was crowning. I wanted to push. I wanted to push so badly…

I just kept yelling: "SHE’S COMING! I NEED TO PUSH!"

We screamed to a halt in the birthing centre car park, just a few contractions shy of Millie arriving.

A nurse ran out into the middle of the car park, with a sheet held up as a makeshift barrier, to hide us from onlookers. I stood there exposed, slumped over my kneeling husband, as he supported my weight.

I remember looking down, seeing my legs shake as that final contraction engulfed my entire being… and then Millie was here.

They managed to manoeuvre Millie into my arms, as I was lowered into a wheelchair and rushed inside. 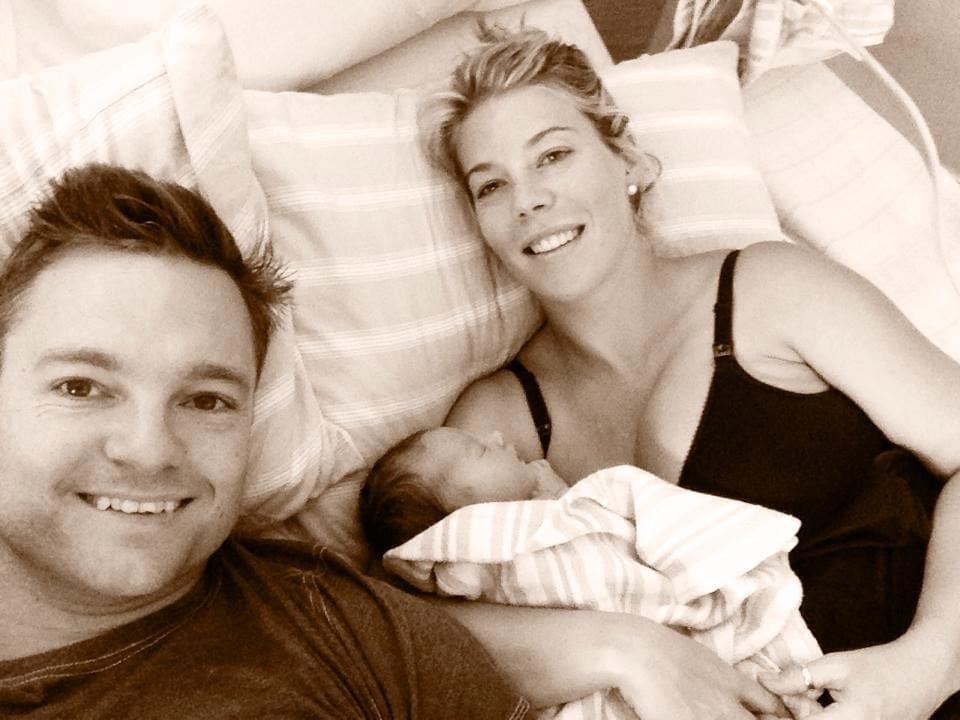 What a rush. It was out of this world. A moment of pure humanness, where my raw strength and primal instincts took over. It was something that I will never, ever forget. And neither will Nick.

The freedom that was encouraged by my midwife to empower me to birth my own way was nothing like the experience I had with my son, Harry.

Side note: Listen to other extraordinary birth stories on Mamamia's birth podcast, The Delivery Room. Post continues below.

Harry was born in an Austrian hospital.

It was something that I was massively afraid of; giving birth in a foreign country where I couldn’t speak the language.

In Austria, if you’re 10 days over, you’re induced. And I was out of time, even though I knew my body wasn’t ready. Harry wasn’t ready.

Millie was exactly 14 days overdue and she came when she was ready. I was open, and we were both ready for the birth.

Yet here I was, laying on the hospital bed in an Australian hospital waiting to be induced.

Little did I know that the doctor had gotten it wrong. I laboured for almost 14 hours - with my water still intact.

I am a warrior when it comes to physically pushing through. Nothing will stop me when my mind and body are aligned. But this pushed every fibre of my being well beyond my limits.

As I waited for my contractions, all I could hear was the sound of nurses laughing. The whole experience felt like I was in a bad movie.

While I was bent over the hospital bed waiting for the next wave, the nurses, despite my repeated requests, put sanitiser on right in front of my face. The smell made me want to puke violently. All I could see was sheets and their hands, and all I could hear was German and laughing.

My thoughts disrupted my next contraction - did they understand me? Was I safe here? Should I leave and go somewhere else? I wanted to run.

To this day, I am furious about those moments, forever tattooed on my brain. Why were they laughing at me becoming ill over the sanitiser? Why were they disrespecting a woman, let alone a woman in labour? Weren’t they supposed to be looking after me?

The next wave was intense. I was fighting the urge to throw up, while simultaneously holding back from yelling at the doctor and nurse for being so inconsiderate.

I asked them for acupuncture. I told them that something wasn’t right. My intuition knew Harry wasn’t ready to come; he wasn’t getting any closer.

Eight hours of labour and four centimetres. The induction hadn’t fully taken effect. I was in prodromal labour.

The doctor agreed to try the acupuncture, to see if it would move things along. They put the needles in and shortly after, one of the nurses came to move the needles in my foot. As she went to leave the room, I felt the floor begin to disappear beneath me. I fainted and fell from the bed. Nick caught me in mid-air, while yelling for someone to help.

My oxygen levels dropped fast, and the nurse rushed back into the room to put me on a drip. Labour stopped for about an hour, and I was able to close my eyes and breathe.

When I woke up to a weak contraction, they asked to check me.

Finally, almost 10 hours into labour they realised that my water hadn’t broken! F*** it.

So with the next contraction, they went in with the knitting needle and ‘pop’ - my water finally broke. Here we go, I told myself. It’s time.

I spoke to Harry. I let him know, and gently encouraged him. And as the next contraction came, I felt him. The ring of fire; one of the most intense sensations that has vividly stayed with me from both births.

I asked for a bath. Another contraction and I was off the bed.

I had to walk to the next room, through the main hallway. God help me - why didn’t they have interconnected rooms?

There was a couple walking in, and he was holding her up, just as Nick was holding me up.

And then, another big wave. I let out an almighty groan.

For those of you reading this who have not given birth, the sound and scene is nothing like the movies. It’s deep, it’s guttural, it’s wild and beautiful.

With the next break, I managed to make it into the room and into the bath. I remember almost breaking the edge of the bath, gripping it as the next two waves pounded me. Then, as I came up for air, so did Harry.

He was here. We did it. Relief came over me as my eyes filled with tears. 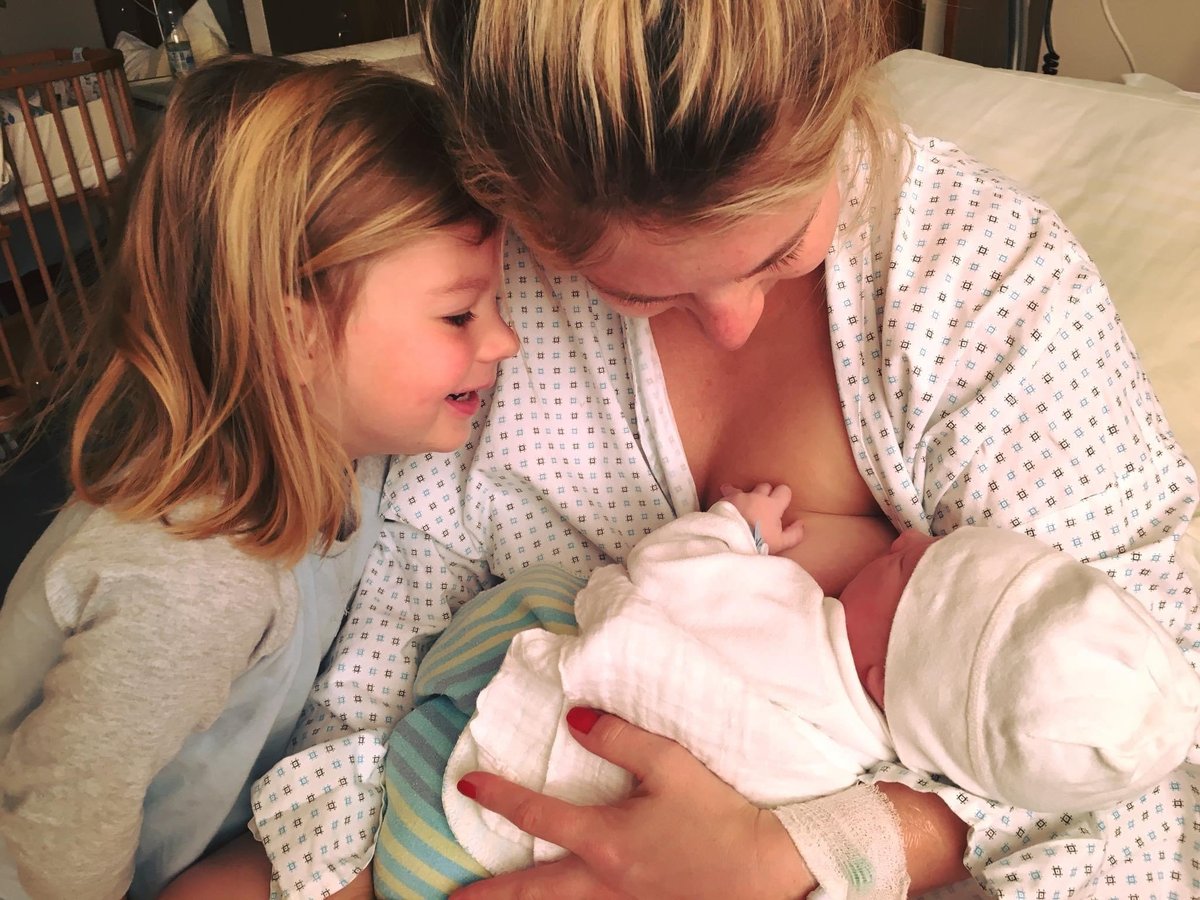 Millie and Harry entered the world on different sides of the planet. Their birthing stories are wildly different, yet I’m forever grateful for both experiences.

Birthing is the most beautiful, transformative experience that we as women move through, whether it’s a vaginal birth or caesarean. We are amazing, us women. Trust your body and your intuition, she knows the way.

Shannon Rose is a life coach and host of the podcast Conversations of The Living Free, available on iTunes. You can find her on Instagram or visit her website.