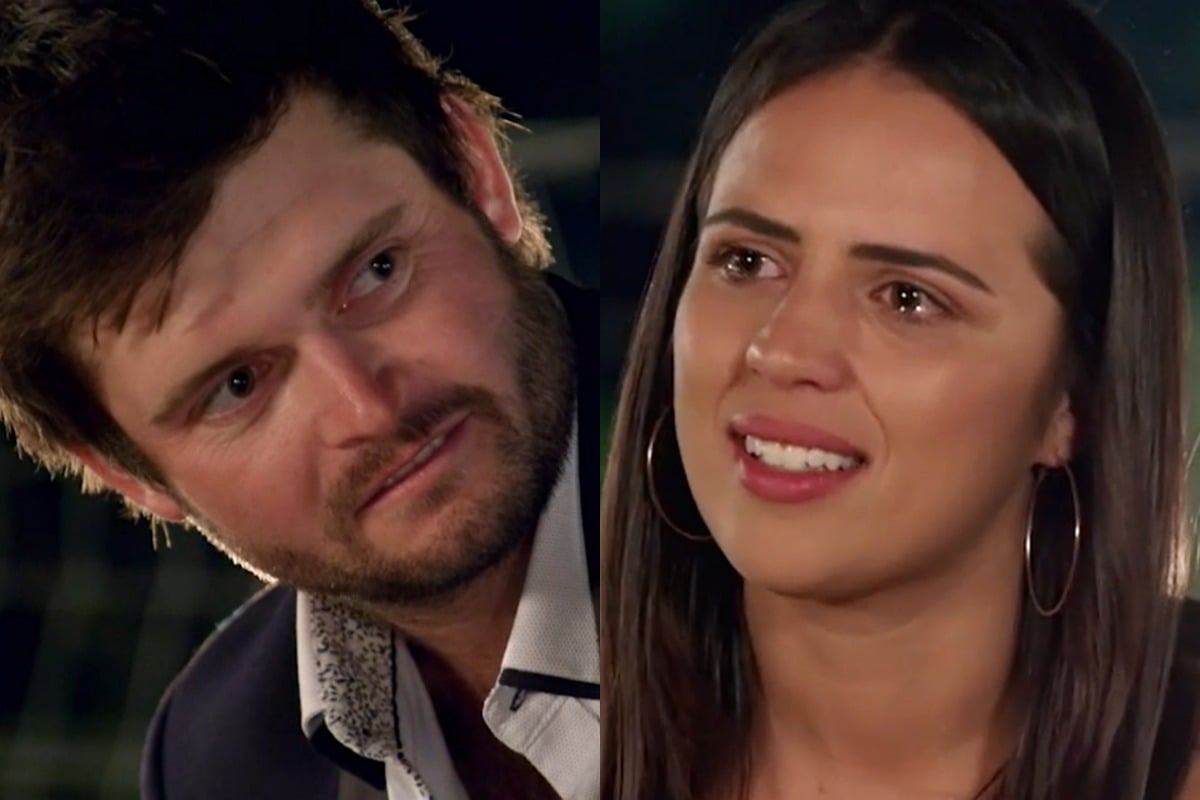 We open on some sheep having a LOL. 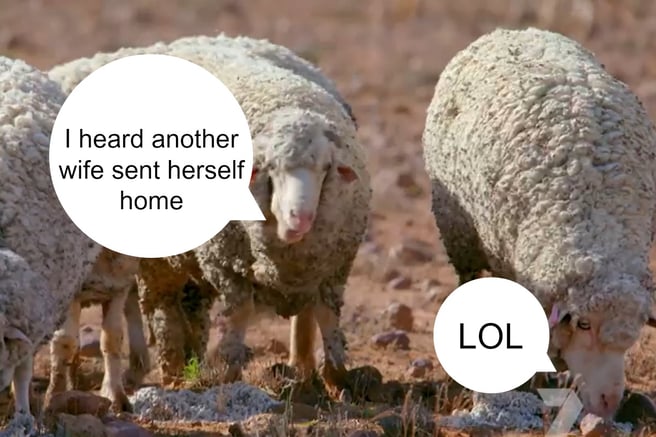 "There'll be no one left soon."

The wives are helping on the farm again and slinging mud at each other... literally.

Over at Farmer Alex's, Jess and Henrietta get in the trough together and bond over the fact that they secretly a lil' bit hate their shared husband. 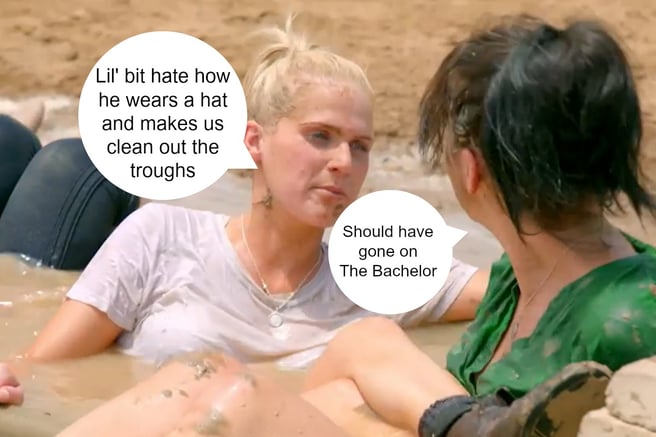 At Farmer Harry's, Karlana - who is currently hoping to marry a sheep farmer - has just come out as a... pescatarian.

She loves animals you see and doesn't think they should be harmed.

The other wives are wondering whether they should tell her about what happens to the sheep at the farm. ¯\_(ツ)_/¯

At Farmer Nick's, he's decided to just straight up kiss one wife in front of his other wives. He obviously hasn't read the polygamy handbook where it clearly states that a husband should not kiss a wife in front of the other wives unless there's a full moon on a Tuesday and three cows have mooed in the paddock. 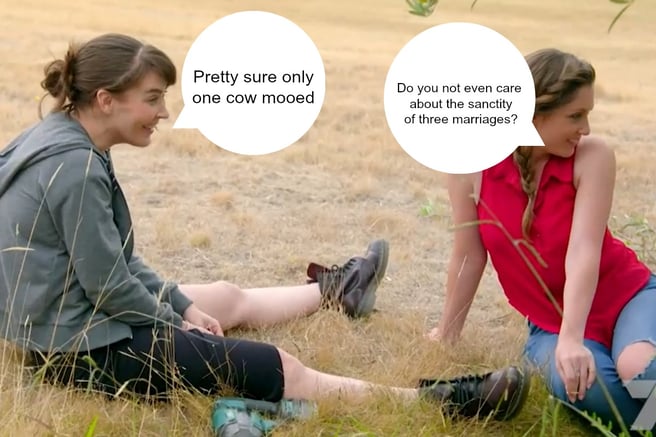 So weird of him.

Over at Farmer Harry's, Karlana is upset because she's just found out what happens to the... sheep.

Farmer Neil is taking his wives into the bustling metropolis of Goulburn to meet the Big Ram. 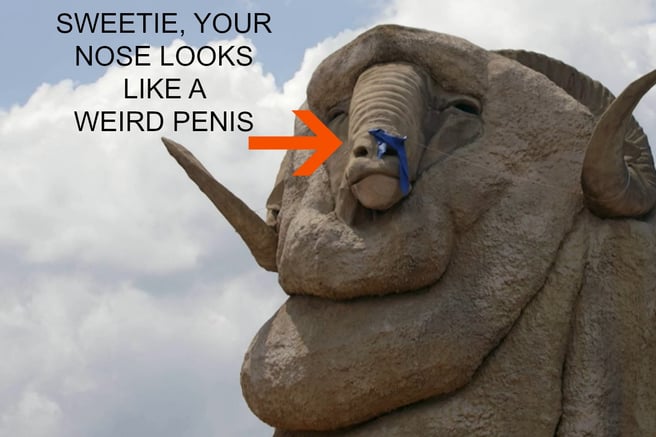 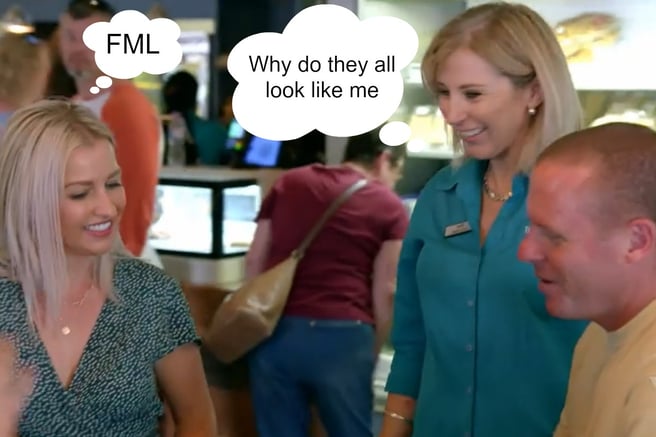 "THIS IS GOING SO WELL."

The ex-wife and the new wives have a lol at how Neil obviously likes blondes and how this definitely isn't awkward for precisely all of them.

It's time for the farmers and wives to reunite because... drama. And also... gossip.

The farmers have a beer, and the wives go to a day spa.

Farmer Nick tells the other farmers that he and his remaining three wives are all getting on like a house on fire. Meanwhile, Naomi is telling the other women about that time Nick kissed Emma in front of his other wives.

Then Megan tells Karissa about the time Justine and Farmer Neil got a little bit too close on the couch in front of her.

It's almost as if it's hard juggling three to four wives at the same time.

Farmer Harry tells the blokes he's heard that Karlana was looking forward to coming back to Sydney because she wanted to "catch up with a crew member".

Harry says the combination of Karlana being a pescatarian and ALSO wanting to hook up with a producer has made him have serious doubts about her.

All the farmers and their wives reunite for a "country ball".

After cutting sick on the DF, Harry takes Stacey and Ashley to some bales of hay for a private interrogation.

He asks them about the allegation that Karlana wants to meet up with a crew member. They say they don't want to throw anyone under a bus and then proceed to throw Karlana under a bus. 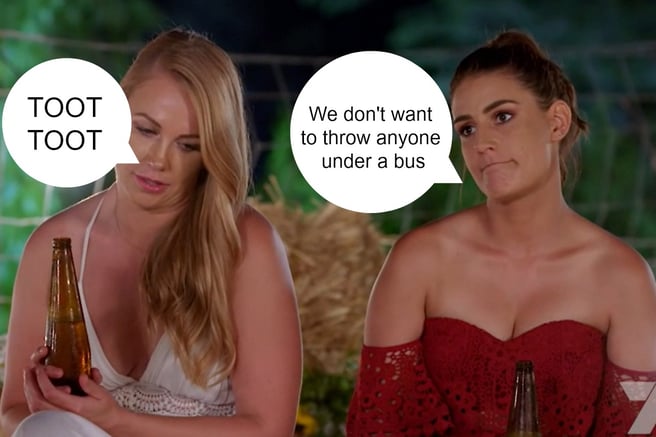 Harry then takes Karlana to the hay bales. He asks her about the allegation and she a little bit denies it before admitting that yes, there is a crew member she gets along with but she also gets along WITH ALL OF THEM. 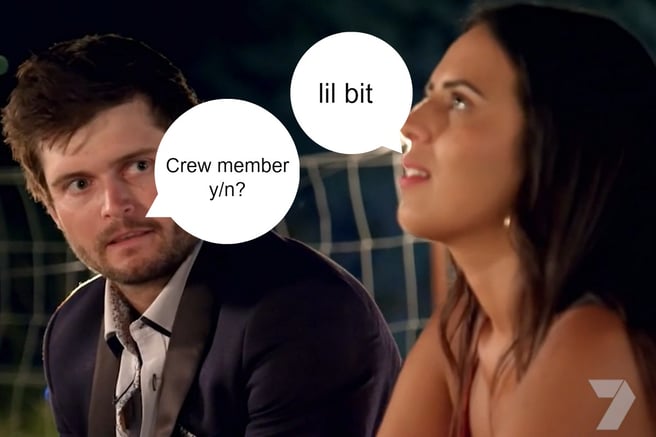 SOMETIMES YOU GET CONFUSED ABOUT WHAT SHOW YOU'RE ON AND THAT'S OK.

This has suddenly become Crew Member Wants A Wife and I'm not mad about it.

Harry straight up asks Karlana if she came on the show to find a farmer or find a crew member. She says she doesn't want to be here anymore and storms off in tears.

Meanwhile, Karissa confronts Farmer Neil about that one time he kinda hooked up with one of his other wives. He explains the rules of the show to her and they kiss and she seems... satisfied.

Karlana is off the ground and she'd like to know who threw her under the bus pls.

Ash admits she did the bus throwing, and that's she's sorry about it now because it's kind of ruined the "country ball".

Farmer Harry says goodbye to Karlana, and she heads back to the city to find herself a crew member who will love her and her pescatarian ways... just as they are.

Meanwhile, the rest of the "country ball" has descended into chaos as all the wives suspect that their farmers are kissing the other wives behind their backs.

Farmer Neil is chasing Justine around the ball while she's "chucking a tantrum" because he kissed Karissa. So Karissa chucks her own tantrum to see whether he'll chase after her.

Neil chases after Karissa, and she tells him she's done. So Neil does his own storm off and... no one chases after him.

The farmers now have to choose a wife for the next solo date.

Farmer Neil gives a speech about strategy and tactics and maths and stats which offends precisely all of his wives.

He then chooses Justine.