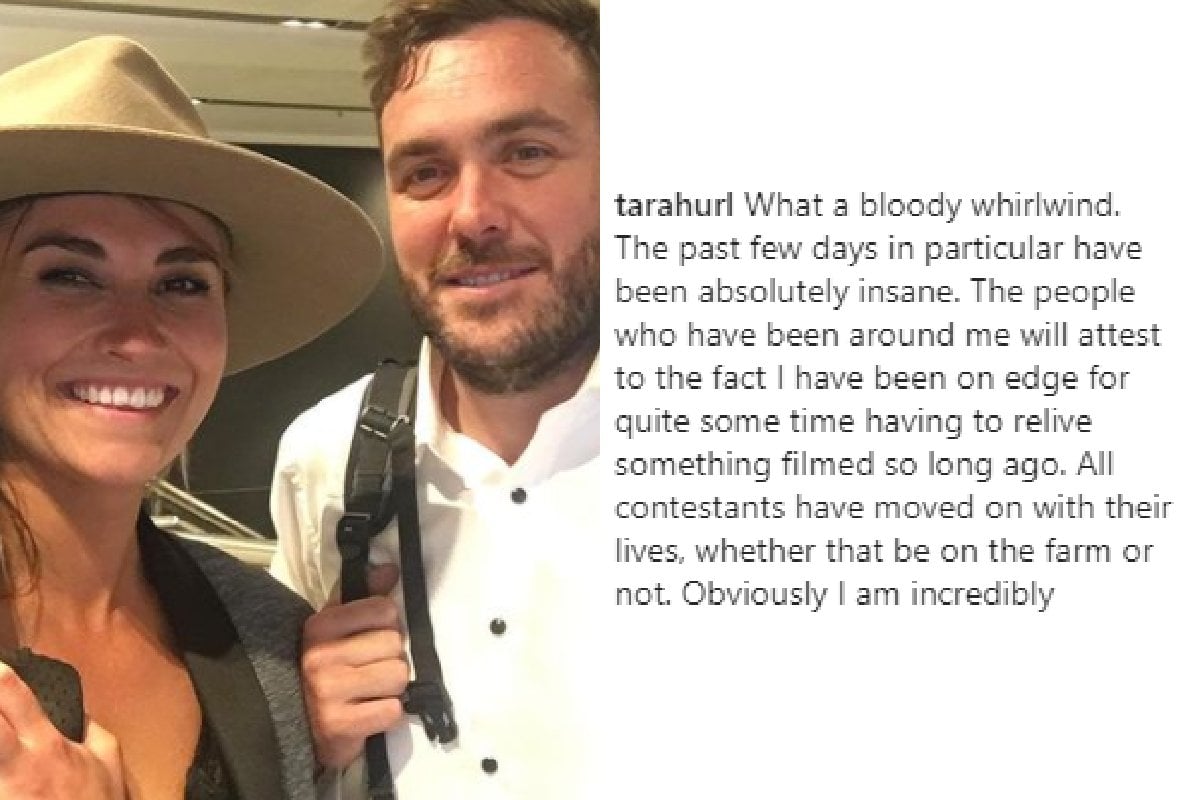 Last night, we watched three of our four remaining farmers choose the woman they hoped would one day be their wife.

In true reality TV fashion, they all chose the woman least likely to adjust well to life on the farm.

So are Matt and Tara, Andrew and Jess, and Will and Jaimee still together?

Welcome to my very comprehensive investigation using... Instagram embeds... and also the "feeling I have in my waters".

During last night's finale episode, Farmer Rob decided not to choose... anyone.

He told both Vici and Kate that he just wasn't feeling that connection with them.

It's pretty safe to assume that Farmer Rob is still alone in the Snowy Mountains, waiting for that 'lightning bolt moment' to come along.

During the finale, Farmer Andrew let Ash know that his heart belonged to someone else and then he told Jess he had fallen in love with her.

After the episode aired, both Andrew and Jess confirmed they are still together on Instagram.

Andrew posted a slideshow of photos of their time together, before and after the show, writing:

"As hard as this whole experience was, and to relive on screen, I can’t say it was all bad. Because I met the most amazing person I have ever met. Rob talks about the ‘lightning bolt moment’ and it hit me real hard very early, it’s something that I have never experienced before. You can’t force it, it just happens, and I had never truly understood it until I met you.

"You are the kindest, most thoughtful and genuine soul. Only you and I know the real truth to our story, and I am ok with that. Over six months together and my love and appreciation for you grows every day. I can’t wait to move forward with our journey and not have to hide it away from the world. Love you, babe."

Jess also confirmed that they're still together on her Instagram.

"Diving in head first on reality TV certainly brings out the best and worst in anyone. I never thought I’d meet my true love in such a bizarre setting, but how lucky am I to experience so much emotion and connection with my person in such a short period of time," she wrote in her post.

"Andrew you have my whole heart. Seven months on and I can finally let the world know that I have found my penguin. Now to enjoy the experience for what it was meant for. I love you, Andrew. P.S despite what you saw on camera, he said it first."

So that's one couple living happily ever after!

In the final episode, Farmer Matt chose Tara, despite his reservations that she might abandon not only him, but their future kids plus all the farm animals as soon as things get tough.

In the lead up to the finale, Matt posted about the experience and tagged both Tara and Alex in his posts.

However, he has not posted anything since his final decision was aired.

Meanwhile, Tara posted a photo of herself... alone, and a long caption about her experience on the show and the way she has been treated on social media while the season aired.

"What a bloody whirlwind. The past few days in particular have been absolutely insane. The people who have been around me will attest to the fact I have been on edge for quite some time having to relive something filmed so long ago. All contestants have moved on with their lives, whether that be on the farm or not," she wrote.

"I am very well aware of all the horrendous comments out there about me and I shouldn’t need to defend myself against them. I will however publicly call anyone out who has anything nasty to say about myself or any of the other ladies (unlike FWAW have done). Your comments are unnecessary and are extremely hurtful regardless of how small minded you are."

This one is a no from me. Be kind, people.

Farmer Will and Jaimee.

I had real hopes for this match!

During the last episode, Farmer Will told Jaimee that he chooses her if she'll have him, and they giggled and kissed and it seemed like these two crazy kids were really going to make it.

But while Will posted about the experience during the lead up to the finale and tagged Jaimee, he hasn't posted anything confirming their relationship since the finale aired.

He did, however, post this rather cryptic photo of a spider web that I read way too much into.

I just feel like these two are no longer together because they're too genuine not to tell us if they were.

So it looks like only one farmer - Farmer Andrew, the man who doesn't like the drama - is still with the woman he chose.

However, there's a reunion episode on Sunday night and during last year's reunion episode we found out that one farmer had pulled a Blake Garvey and another farmer legit just turned up with a... random.

So who knows what will happen!

I miss the gossiping cows and the drama-loving sheep already.

Catch up on all Keryn's Farmer Wants A Wife recaps here: