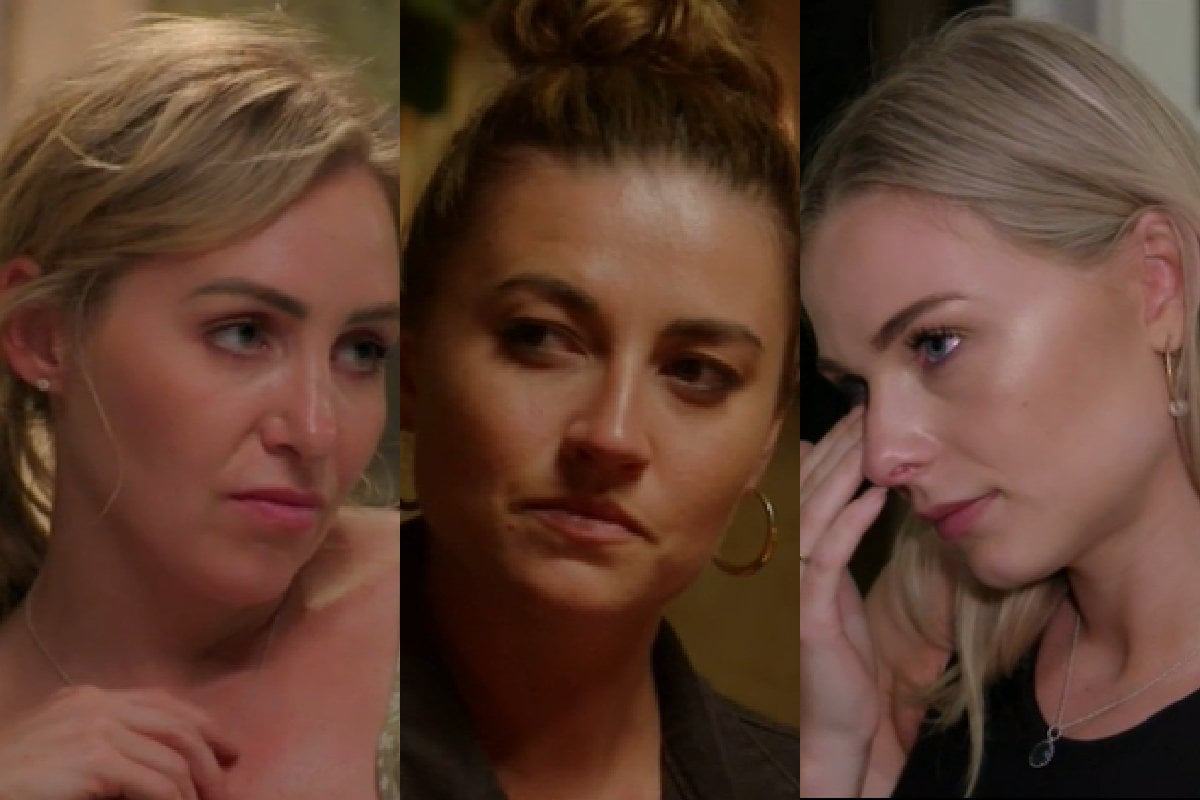 We open on some cows having a gossip.

They've heard about Farmer Rob returning and getting four new wives and they've got some... questions. 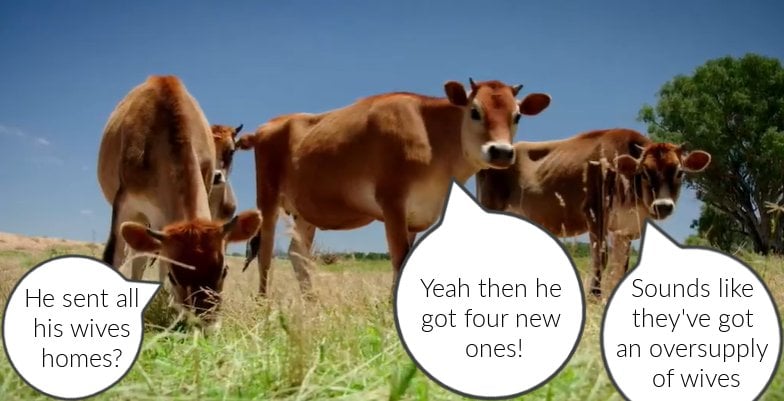 "MUST BE BAD IN THE BIG SMOKE."

It's one-on-one date time and Farmer Rob has bought Vici, the first of his four new wives, back to the farm for some quality time.

Farmer Andrew and his dad "Chops" are planning something special for his second date with Jess.

Chops says he didn't have to bring out the big guns to get Andrew's mum's attention, she was "straight into me arms" because he's such a catch you see.

Meanwhile, Fake Farmer Sam is taking Nickia for a hot balloon ride over his fake farm and also the rest of Canowindra. If you look really closely, you can see the locals standing in the street, pointing at the balloon and saying "I've never seen that man before in my life". 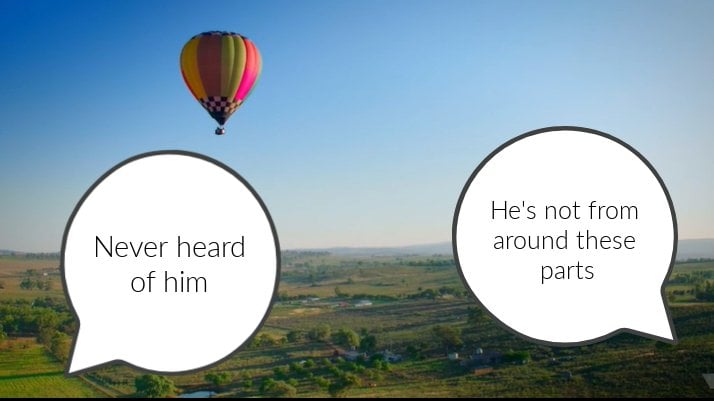 "That man is a stranger to each and every one of us."

Farmer Rob and Vici are riding horses and it's all very 'The Man From Snowy River' of them.

Farmer Will and Jaimee drive around the paddock and get all muddy which is fun for them.

Okay, okay. The special thing Farmer Andrew was putting together for Jess was a dirty pool in the middle of a paddock. 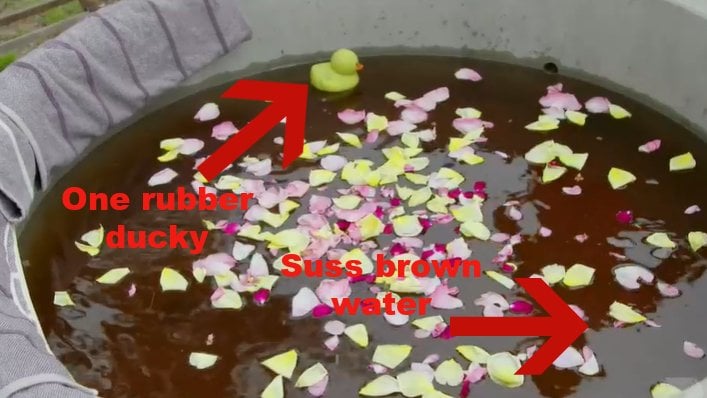 She seems happy though, and that's all that matters.

Meanwhile, Farmer Matt is taking Alix for a swim in a local watering hole.

Jess and Andrew sit in the dirty pool and talk about whether she'd move to the farm or not.

A muddy Farmer Will and Jaimee are also discussing the reality of her moving to farm and whether her family in Canada would like it.

The rest of Rob's second lot of wives arrive at the farm and Vici welcomes them to "her house".

Farmer Rob gets his four new wives working on the farm and Sarah just... sits there.

I give her the rest of the day.

Farmer Will says he's not sure where he stands with Jess because she's quite guarded. He's obviously forgotten that the universe has a plan for them.

IT'S TIME FOR THE FAMILIES TO DO SOME MEDDLIN'.

Fake Farmer Sam's family turn up at his fake farm to meet his wives. 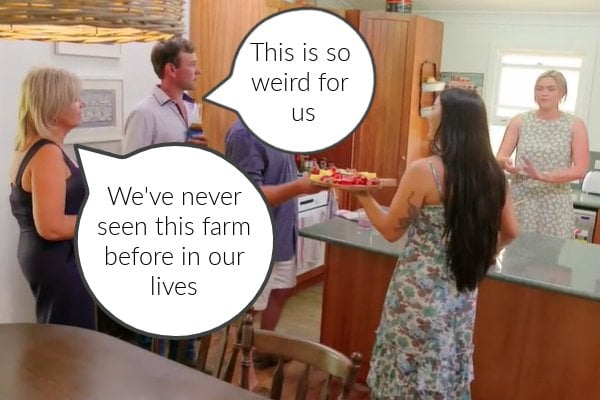 "I think they're buying it."

Farmer Matt's brother Andrew and his friend Aaron come to meet his wives and Hayley a lil bit hits on Aaron. 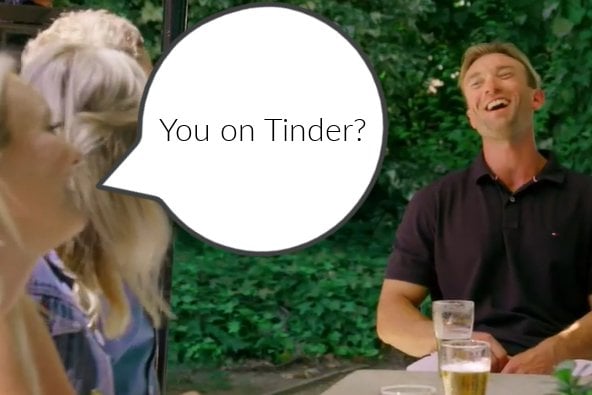 Andrew and Aaron tell Matt to give the quiet ones like Alix more of a chance.

Farmer Andrew's wives have gone to Chops and mum's for afternoon tea. Mum takes them on a guided tour of all the family weddings that have occurred on the farm and says she hopes there's another wedding soon and they all laughed because they're literally on a show about a guy finding a wife.

Fake Farmer Sam's mum and brother like Mackenzie and Nickia and say they seem... real... and lol the irony.

At Farmer Andrew's, mum says he needs to think very hard about whether Jess will actually move to the farm while Chops eats some scones.

It's time for the farewell dinners!

Fake Farmer Sam takes Nickia for a chat straight away and tells her they just don't have that "connection".

Farmer Rob takes Sarah for a chat and they mutually decide they're better off as friends because she's not going to be helping fix a fence anytime soon.

Farmer Will decides not to send anyone home.

Jaimee is not... impressed. 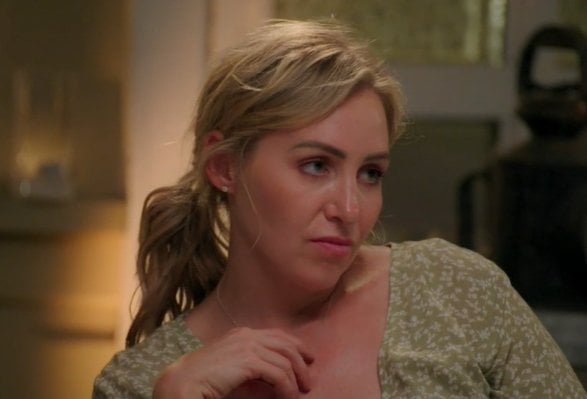 Farmer Andrew takes Jess for a chat and asks her again about whether she'd move to the farm.

After their chat, he decides not to send anyone home.

Over at Farmer Matt's, Tara is telling him she needs to go home.

Farmer Matt seems genuinely devastated, and it's sad for him because now one of his wives is going home and another one is definitely going to hook up with his best friend Aaron.