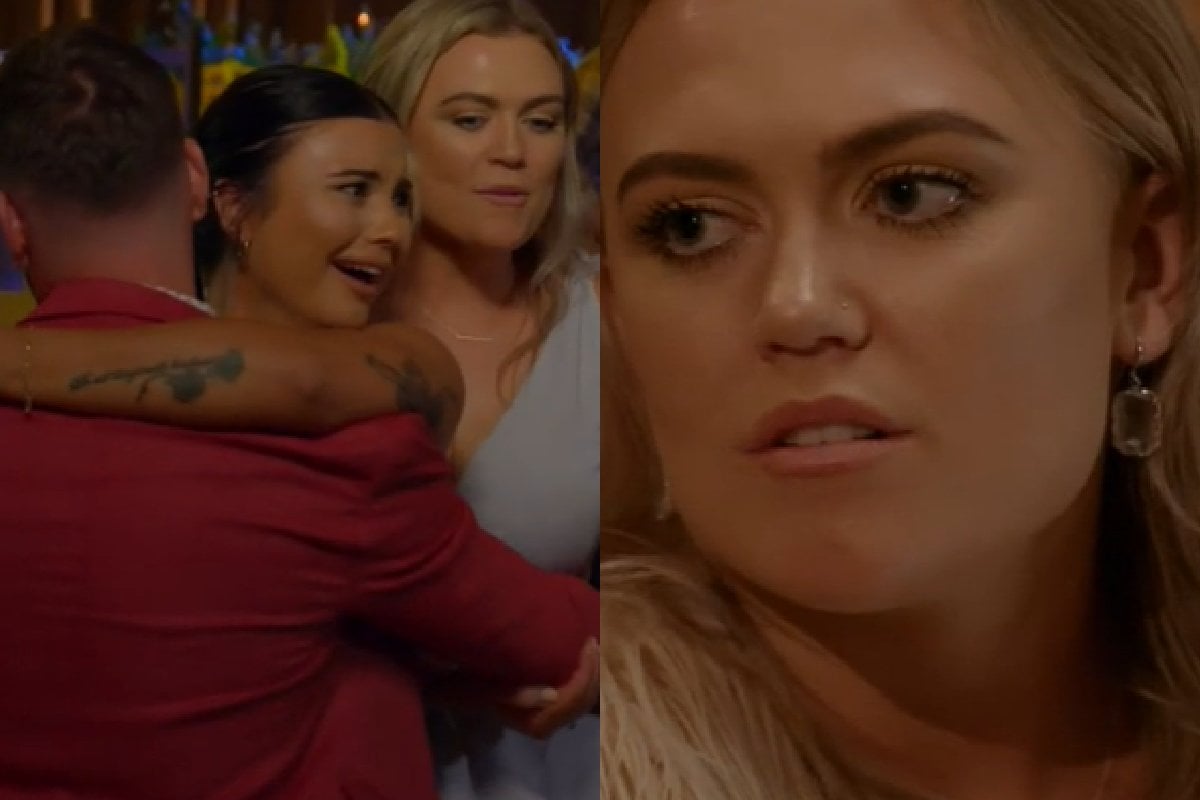 We open on some geese having a gossip. 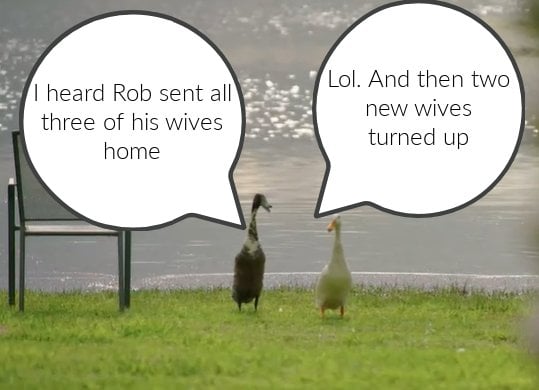 "THIS SHOW IS OUT OF CONTROL."

At Fake Farmer Sam's fake farm, his four original wives and one new wife are having real pancakes for breakfast.

New wife Chelsea is realising she may have made a terrible life choice.

Over at Farmer Will's, Jessica is doing her impersonation of a sheep. The universe and also the number 11 like it. 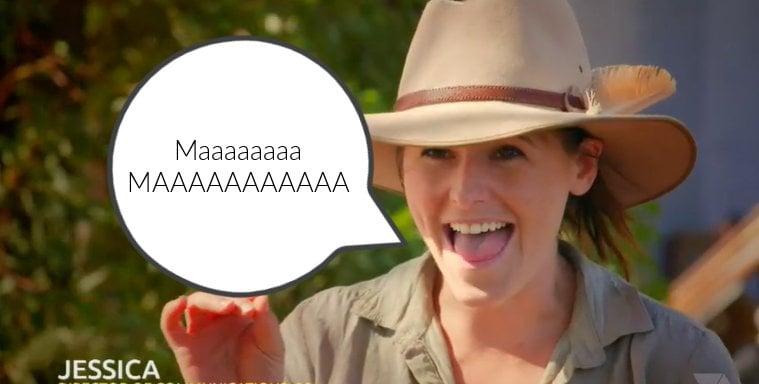 Over at Farmer Matt's, the wives are herding some cattle and also ignoring new wife Jacqui.

Matt decides it would be a good idea to get all five of his wives to guess the weight of a cow and whoever is closest to the correct answer gets a... kiss.

Jacqui gets the kiss and hoo boy, this is not going to help the situation. 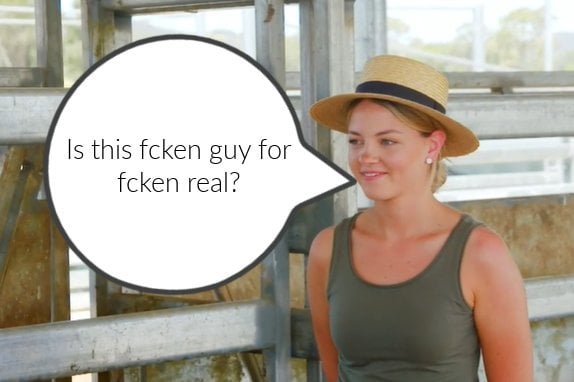 Fake Farmer Sam takes Chelsea for a chat and she says it's hard being the fifth wife in the already established harem and it's almost like the other wives don't want her there?

The farmers and the wives pack their bags and head to the "Country Ball" for the... gossip and also the... drama.

The wives catch up for a wine and introduce their new wives to the rest of the wives.

Meanwhile, the farmers catch up for a beer at the pub and say things like "HERE HE IS", "HERE'S THE BIG FELLA" and "HOW ARE YA BROTHER". 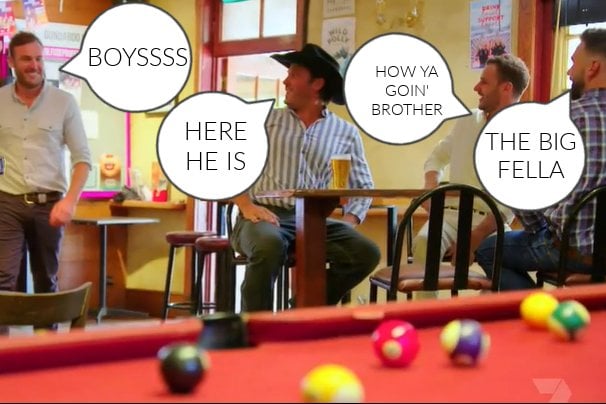 They have a bit of a laugh about how two of them brought a new wife home and then Matt tells them about his kissing competition. It's laughs all around.

Meanwhile, at the wives' camp, Nickia has decided that if she doesn't get the one-on-one date with Sam she's going to head home.

The farmers have just remembered that Rob is... missing and they have a toast to "THE BIG FISH".

Farmer Rob is back and Nat has found four new wives for him.

It's becoming abundantly clear that this show has an oversupply of wives. 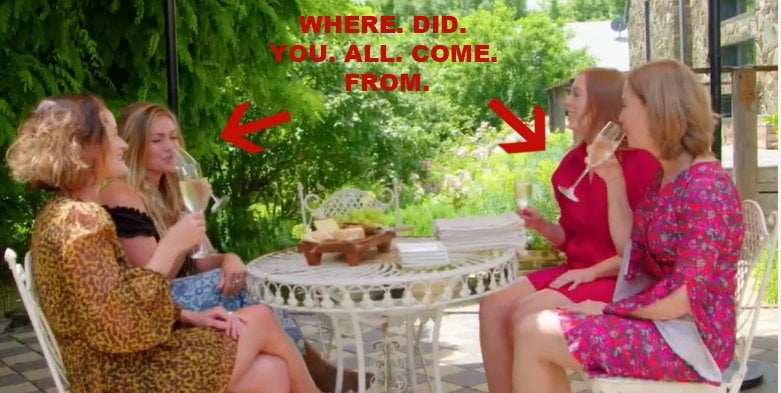 "WERE YOU JUST HIDING BEHIND THE SHED?"

Rob meets his new wives and one of them describes him as a "bit of viking throwdown".

It's time for the "Country Ball" which still means... drama, and also... gossip.

After Nat introduces the group to Rob's four new wives, they hit the dancefloor.

Fake Farmer Sam's new wife Chelsea tries to cut in on his dance with Nickia so he just... dances with both of them. 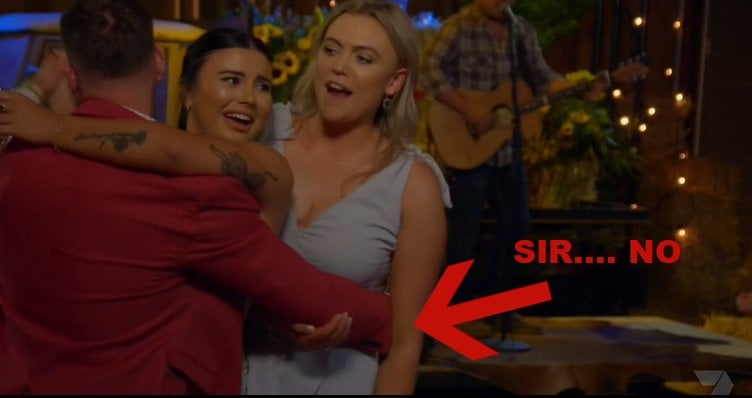 Farmer Will takes Kristina (a woman we definitely haven't seen before tonight's episode) for a chat. She seems nice!

Meanwhile, everyone is sitting around drinking when Jessica decides she should "light the fires". 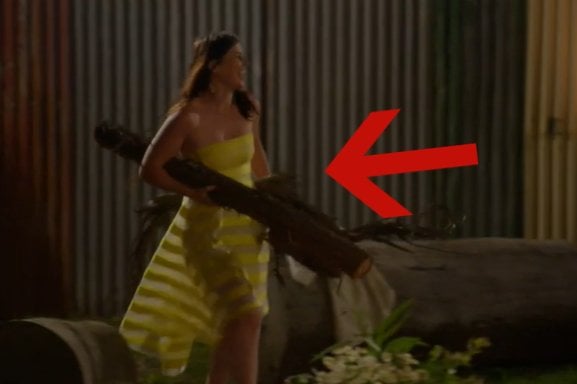 They've definitely got.... people for that.

Nickia takes Fake Farmer Sam for a chat and gives him her ultimatum. 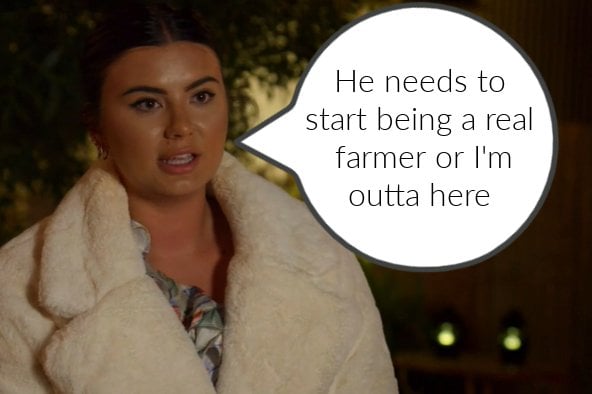 "The sheep are just cavoodles in costumes."

Chelsea takes Fake Farmer Rob for a chat. She tells him she wants the single date. He tells her she needs to be "patient" and she says "honey, I've only got a couple of weeks left". 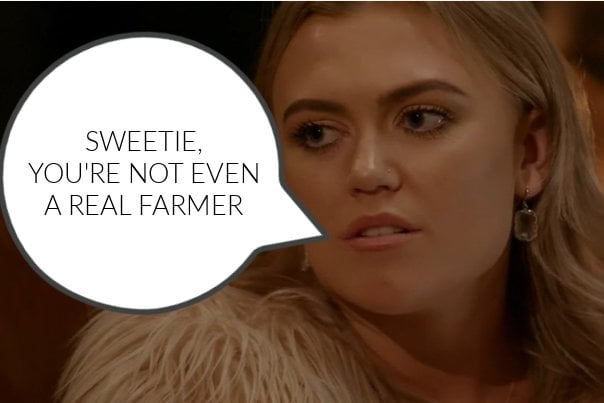 "I'll be patient but you need to learn some farm-based skills."

Jess takes Farmer Andrew for a chat and tells him he's "so good" and then they have an awkward giggle.

It's time for the farmers to choose their next one-on-one date.

Chelsea ain't happy about it.