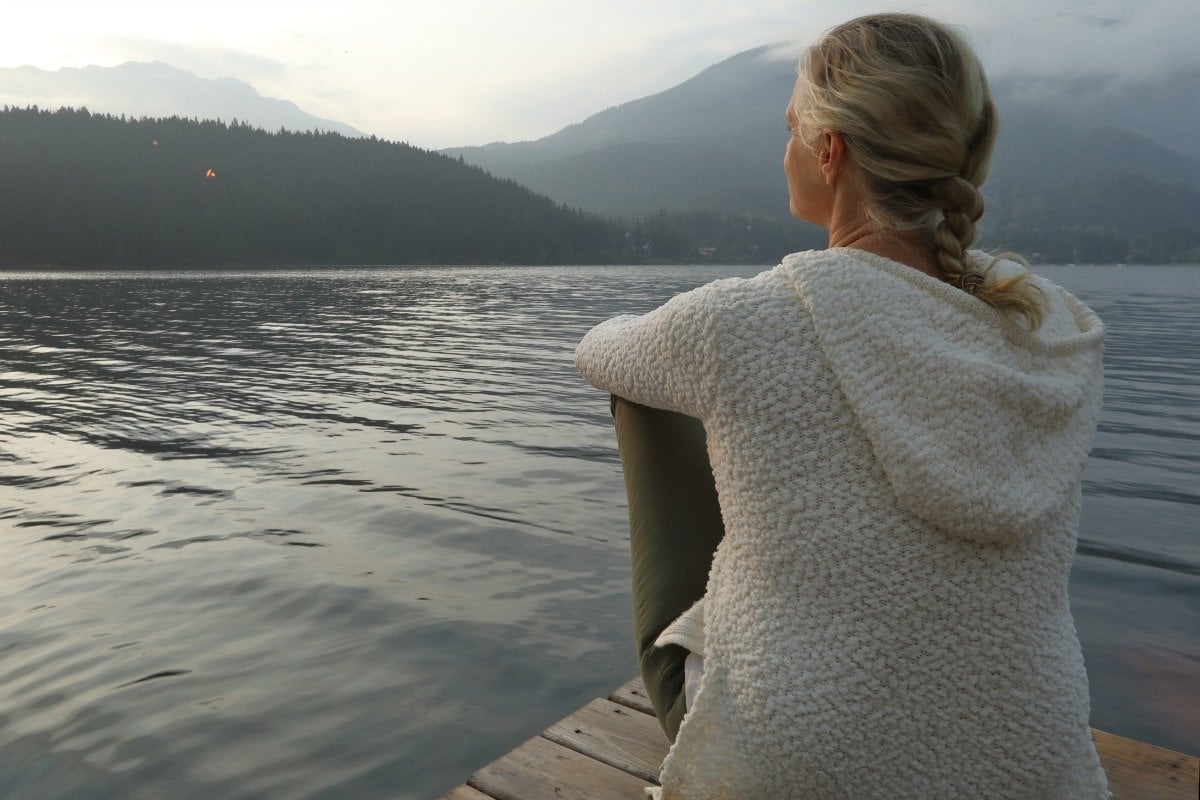 "Tell me about your family?"

It's a question asked by new work colleagues, friends of friends at casual barbeques, or while on a first date with a potential new lover in a casual, getting-to-know you, kind of way.

It's a question that comes up surprisingly often.

But for many, that question is fraught with pain, and answering it truthfully just wouldn't be appropriate in such light, frivolous settings.

Listen: Mamamia's Kee Reece talks about being estranged from her parents.

Estrangement from family members is not a reality spoken about often in public forums, by people of influence. Or by people at all. We're programmed to believe that "blood is thicker than water," and that family is forever, no matter what.

Which is why Mariah Carey's new memoir, which talks about her relationship with her "ex-brother" and "ex-sister" is so important.

In the book, released in October 2020, Carey has painted a picture of her upbringing that's clouded with fistfights, arguments and cruelty. She recounts an incident where her brother slammed her mother into a wall, and another where her sister poured hot tea down her back.

Because with family estrangement comes stories of pain, and often violence. And this is happening in households all over the world for a plethora of often complicated reasons.

Here are just four reasons, told by four women from the Mamamia community.

I was sexually abused by my father from the age of 10 to 14.

I have a younger sister, who was very young at the time and I felt it was my duty to remain in the family unit to protect her as there were no signs of my mother leaving which I felt put my sister at risk. During my teens and adult years, we formed a public facade, a false happy family and in many ways, we continued life as normal. I think my parents thought because abuse had stopped and I'd received counselling, that we could continue on as before.

For over 20 years I have played in different versions of our false happy family whilst continuing to distance myself but the expectations were always there to be a happy family. I now have children of my own so have estranged myself from my father. My parents live interstate so that makes things easier but larger family events always cause difficulties - I've always felt I’ve had to choose to keep quiet or give up time with my family. For years I've carried the burden of my sister not knowing the truth about our father. She has a fairly normal relationship with him and has not experienced any abuse.

At the start of this year, I told her and we have been working through things together. I also asked my mother to leave my father, but she has chosen not to. So today I have estranged myself from both of my parents. I’m still working through the firsts, the first Mother’s Day I didn’t speak to my mum, navigating my children’s birthdays without their grandmother. Dodging the ‘how are your parents?’ questions from extended family members. As we near Christmas I’m dreading the further conversations and hope that people can learn to be sensitive with their questions.

If you do have questions, read the cues, be kind and remember not to judge. This is a choice of knowing my boundaries and respecting my values, and it’s a choice I live with daily.

Having grown up in a domestically abusive situation, I knew from a reasonably young age that my father was an awful, manipulative man.

The older I got, the quicker and worse the cycle of arguments, silence and the pretend happiness became.

As teenagers my sister and I were forever the mediators and witnessed a level of toxicity that no child should be exposed to. In my late teens and early twenties the situation had become so bad our mum decided to leave.

Unfortunately she choose to return not long after and I have not been in contact with either since. That was more than 10 years ago. The older I get, the more okay I am with having cut ties.

The toxic nature of my parent's relationship impacted so many aspects of my life that have taken years of therapy and personal work to reconcile. I had to make a conscious decision to not allow that into my life, and as a result I've grown into a reasonably well adjusted, kind woman and feel at peace with my choices.

I don’t speak with my mother.

She is an alcoholic and I don’t agree with her life choices. She went through rehab three times and failed, and I stood by her through all those attempts to clean up her life. She is also domestically violent to my dad. In 2016 she tried to hurt him a number of times in his sleep. My dad didn’t want to do anything about it, so I had to go to the police on my dad’s behalf and fill in a domestic violence report.

I have not spoken to my mum for five years. I am now married and have children who she has never met, and find people often ask about my mother or her involvement in my children’s lives. I have found I now say "she is no longer with us" as it is easier to stop the conversation.

My dad is sadly still with her living under the same roof but as estranged housemates. My dad had an accident and broke his neck during lockdown and he was in hospital for months. We are now trying to separate them and going through a gritty legal battle. I am looking forward to the next year or so when the divorce proceedings go through and she is completely out of my dad’s life and has no connection to me whatsoever.

It is hard. I don’t go to the house where they live. My dad comes to visit at my house, or I see him at my sibling's houses. But I don't regret my decision.

Everything came to a head in 2013 when I was 37. My dad sent my brother and I an email explaining how he loved us, but he was going to file for divorce from our mother after 42 years of marriage because our mum's 'controlling personality' had given him no choice.

The problem is, he told us before he told her. I guess his plan was for us to tell her. My brother’s partner was the one who ended up telling my mum unbeknownst to me. It obviously was shocking to my mum but also hurtful to me for dad to use us in this way. Gutless.

Almost instantly, he had started seeing someone else. This woman had been in my parents' lives since I was a child and had always been interested in my dad, which I think mum knew. My mum found out about his new relationship when she phoned him to ask who his cousins were talking about on Facebook when they mentioned "how nice it was to meet my dad's new friend." I was livid and I felt like nothing I could say would get through to him so I stopped communicating with him.

When mum found out of course she rang me and then I had to break it to her that I already knew and that I felt terrible keeping it from her, but I felt it was Dad's responsibility to tell her.

I had asked him to do it in a respectful way and I was hurt for my mum. Mum eventually started taking out her problems and heartbreak on me - belittling me and arguing with me. She had done this my entire adult life, along with gaslighting me for not having children or a partner even though I couldn’t physically have children due to cervical cancer.

In one particular row when she came to visit me, she began to gaslight me for rescuing dogs instead. I tried to explain how my dogs were like children to me but she fired up and I couldn’t take it any longer and asked her to leave. I was devastated and emotionally crippled. I haven’t spoken to my mum since.

Years later, Dad phoned me to tell me he missed me, and when I asked him why he thought I had stopped talking to him, he couldn’t tell me. I gently told him that I needed him to understand his actions and how they affected me but he just wanted me to ignore it, act like nothing happened, and move past it. I needed to know he understood my feelings but he wouldn’t go there. So I told him I loved him and to call me when he’s ready to talk about it but we haven’t spoken since. That was almost three years ago now.

This wasn’t the first time this type of thing had happened with my parents. The thing is, I dearly love my parents and I miss them. But I can’t seem to trust that they won’t devastate me again, like they have time and time again throughout my life. It’s been hard at special times of the year. Very hard. Very lonely. The kind of loneliness that you feel in a room full of people because everyone else has parents they have great relationships with. I wish I could have a mentally and emotionally safe relationship with my parents. I fear we are never going to get there, and one day they will pass and how the hell am I going to deal with that?

*names changed for privacy reasons. The feature image used is a stock photo.

Reply
Upvote
1 upvotes
Sometimes I read these stories and wonder if some people are naive or romantic about family relationships. Lucy’s story seems to be about a weak father and an insensitive mother. It’s sad that we are related to people who are weak or insensitive, but most people are. And, as a tip, don’t rely on people’s social media pages or party speeches for an accurate picture of a relationship. That is the edited highlights.
As the other stories show, some people have dangerous relationships with their folks. Obviously these can’t be healed.
News
General
Opinion
True Crime
Politics
Sport
Explainer
Entertainment
Celebrity
Reality TV
Movies
TV
Books
Rogue
Royal
Lifestyle
Beauty
Fashion
Weddings
Home
Wellness
Health
Fitness
Travel
Food
Parents
Before The Bump
Pregnancy
Baby
Kids
Teens
School
Parent Opinion
Work & Money
Money
Finance
Career
Lady Startup
Relationships
Sex
Dating
Separation
Friendship
Family
Real Life
Couples