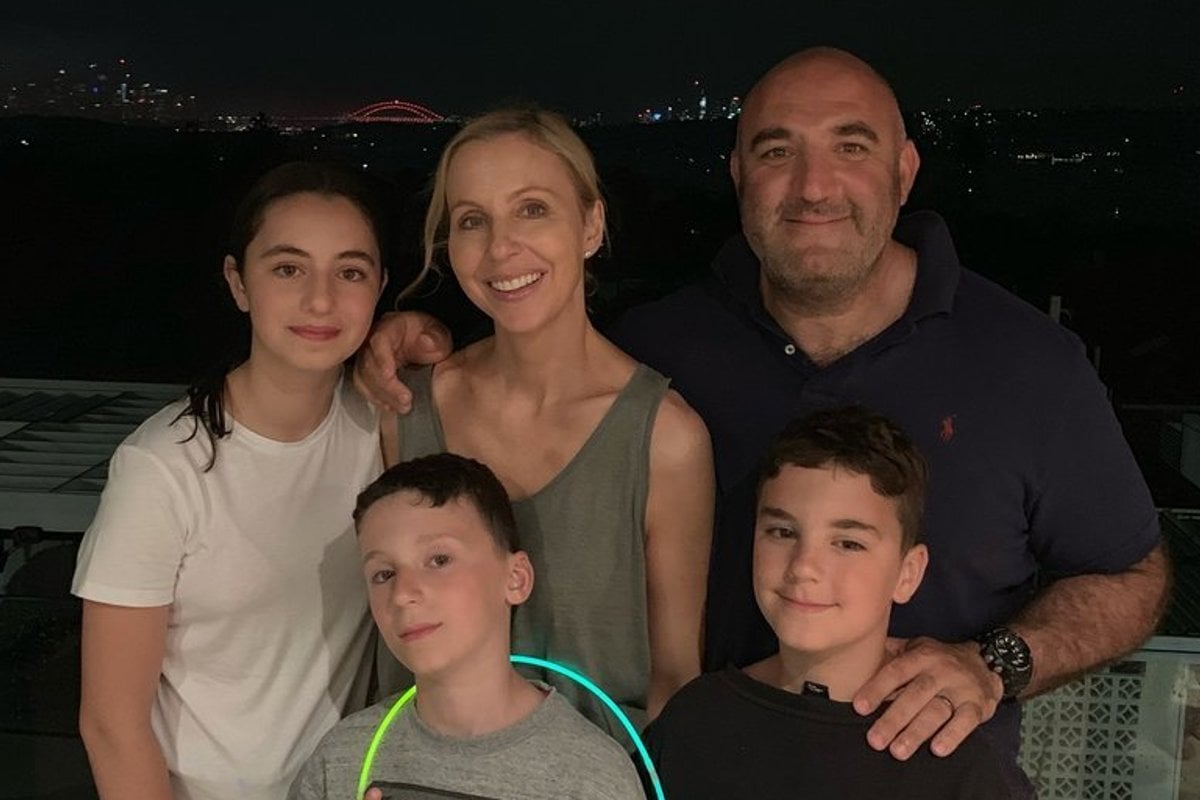 This post mentions pregnancy loss and could be triggering for some readers.

When she met her future husband, she quickly learned he wanted a big family – a ‘rugby team’ was how he liked to put it.

Lori had never had regular periods, and they’d always been excruciatingly painful, so shortly before her wedding, she went to see her GP to work out when her period might be due.

Side note: Check out some of our favourite celebrities on parenting. Post continues below.

In the year preceding her wedding she’d only had one proper period, but she worried that the stress of planning a wedding might bring it on at just the wrong time.

The GP put Lori on progesterone to work out her period and recommended a pelvic ultrasound to understand why her periods were so irregular.

The ultrasound quickly showed she had polycystic ovaries. Further tests revealed that she also had endometriosis.

The diagnosis made sense to Lori after all the years of discomfort and pain she had already endured and so, being told she would likely have great difficulty falling pregnant naturally, did not surprise her.

She was 31 by then and knew she wanted to try for a baby soon after her wedding, so she booked an appointment with a fertility specialist for six weeks after her big day.

“In my mind, I’d decided it would take a minimum of two years to get pregnant. I think I was setting myself up for a long haul to avoid the initial disappointment that I assumed I would experience once we started trying for a baby,” Lori says.

The night before her wedding, Lori says she prayed she would fall pregnant quickly. A deep, soulful prayer, even though in her mind, she was preparing to have to go down the fertility treatment route.

Exactly six weeks after her wedding, Lori went to see the fertility specialist, as planned, who said he’d begin by doing tests on her and her husband.

It began with a simple blood test. “That same afternoon, the doctor called me to tell me I was six weeks pregnant, which took me back to the night of my wedding,” says Lori. “I was completely shocked.”

Nine months later, Lori’s first child, a baby girl, was born. Shortly thereafter, she had a diaphragm inserted as she didn’t want to fall pregnant again too quickly.

When her daughter was around two years old, just as Lori was thinking of trying for number two, she fell pregnant with the diaphragm still in place. It was another huge surprise.

Nine months later she had her second child, a son this time and soon after she went back to using the diaphragm.

She and her husband joked about how fertile they were as a couple, that they only needed to look at one another and Lori was pregnant.

But the joke was over when Lori found out she was pregnant with her third child, when her second was only nine months old. Once again, Lori had fallen pregnant while using a diaphragm.

After baby number three was born, and Lori had three children under four years of age, she decided she wanted to go on the IUD as she knew she didn’t want any more children.

“I was told the IUD was the safest form of contraception,” says Lori

When her third baby was nine months old, Lori’s period was late.

This didn’t surprise her, but she remembers her friend saying to her, “I think you’re pregnant” - and a quick test proved she was.

Lori was due to fly overseas the next day so had to wait until her return to get the IUD taken out. On her return, she went in for the procedure, but first had an ultrasound to check if the IUD was in place and it was, in the perfect position.

Being pregnant, Lori now had to have the IUD removed. This triggered days of hemorrhaging, caused by a clot, and eventually, the doctor decided to do a DNC as he was unable to stop Lori’s bleeding.

As she recovered, she thought about having her tubes tied, but didn’t want to make that definite decision until she was 40. Besides, her gynaecologist told her that because of her history, she’d likely end up being that tiny statistic of women who fall pregnant after their tubes have been tied. So once again, she went on the IUD.

Fast forward to two years ago while on holiday in Japan, Lori got out of the shower one morning and said to her husband that she thought she might be pregnant.

She bought a pregnancy test which proved she was right. She was pregnant - again with the IUD in place.

She called her obstetrician from Japan and told him she was pregnant.

“He was in shock and told me that in his 37 years of practice, he had only seen three pregnancies on the IUD and that I accounted for two of them!”

The doctor told Lori she needed to get back and have the IUD taken out. By now she was 44 and did not want another baby, but she also didn’t think she could terminate again.

Her husband also wanted to keep the baby. She returned to the gynaecologist expecting to discover the IUD had moved out of place – but it was right where it was meant to be.

Sadly, with the last pregnancy, the IUD had to be removed under a general anesthetic, and while that was underway, the doctor discovered the embryonic sac had attached itself to the device, and as it was removed, Lori lost the pregnancy.

Despite having polycystic ovaries and endometriosis, Lori has had five pregnancies, all whilst on contraception.

Lori’s husband has now had a vasectomy.

Reply
Upvote
1 upvotes
Diaphragms aren't medically inserted and left there indefinitely. They are usually inserted by the woman when she wishes to have protected sex (and removed thereafter). This article suggests she was wearing one 24/7, which is... odd.
K
krispy 7 months ago

Reply
Upvote
3 upvotes
1.)  It doesn’t say she was on contraceptives when she fell pregnant the first time and 2) was the husband not taking ANY responsibility for birth control ? Condoms???
After an unexpected pregnancy on one method I wouldn’t be relying on it solely the next time . I get all methods can fail but I’d be double-dipping to up the protection factor
C
cat 7 months ago