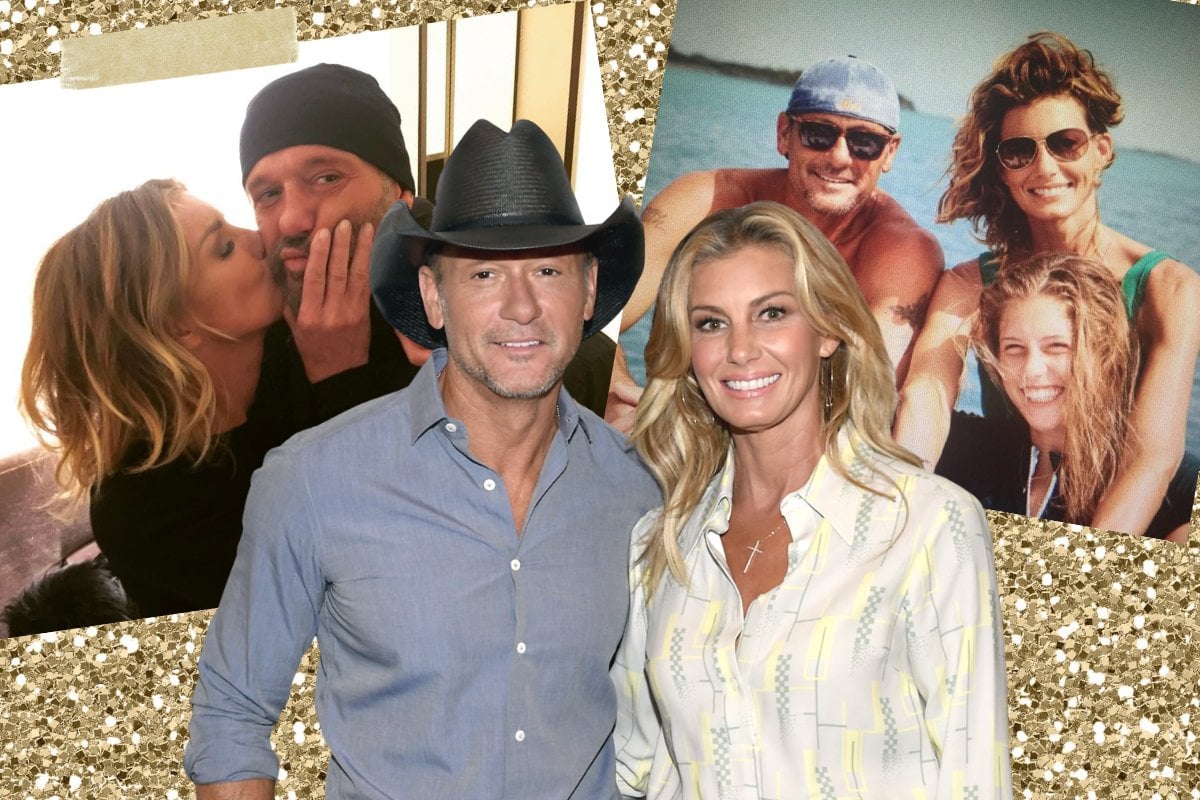 The couple, who combined have won eight Grammy Awards and 29 Country Music Awards, have been married for 24 years and share three daughters, Gracie, 23, Maggie, 22 and Audrey, 19.

But despite all their success and fame, the couple live a relatively low-key life (well, despite the private island and all).

Faith Hill and Tim McGraw met back in 1994 at the annual Country Radio Seminar in Nashville.

At the event, both Hill and McGraw performed in the "New Faces" show and had a friendly conversation. Hill had just divorced her husband of six years, Daniel Hill, and McGraw was dating Kristine Donahue.

Two years later, in 1996, Hill opened for McGraw on his Spontaneous Combustion Tour and sparks flew. At the time, McGraw had called off his engagement to Kristine Donahue, but Hill was now engaged to record producer, Scott Hicks.

Soon after, Hill realised how strong her chemistry was with McGraw, and called off her engagement.

"If someone is going to judge my character because I was engaged to somebody and then I left him for somebody else — 'Oh, okay, now she's a slut and a bad person' — I can't control that. But I wasn't about to let Tim slip through my hands," she told People in 1998.

According to Brides magazine, McGraw shared their proposal story on their 19th wedding anniversary, at a Colorado performance. It was during that same Spontaneous Combustion Tour that McGraw popped the question.

"We were in the dressing room, here, June 26, 1996, and it was raining and stuff and we'd been on tour for a while together, and I joked around with her about getting married. And so I said... I looked at her, grabbed her by the hand, and dropped forward [on my knees] onstage," he told the publication.

"She had already done her show. And I said, 'I'm really serious. I want you to marry me.'"

"She said, 'We're at a country music festival in a trailer house, and you're asking me to marry you? And I said, 'Yeah.'"

Then McGraw went on stage to perform his set and when he came back to his trailer, Hill had written her answer on his mirror in Sharpie.

On October 6, 1996, four months after the proposal, McGraw and Hill invited their friends and family to a softball game and concert in McGraw's hometown, Rayville, Louisiana. Instead of performing, the couple got married. 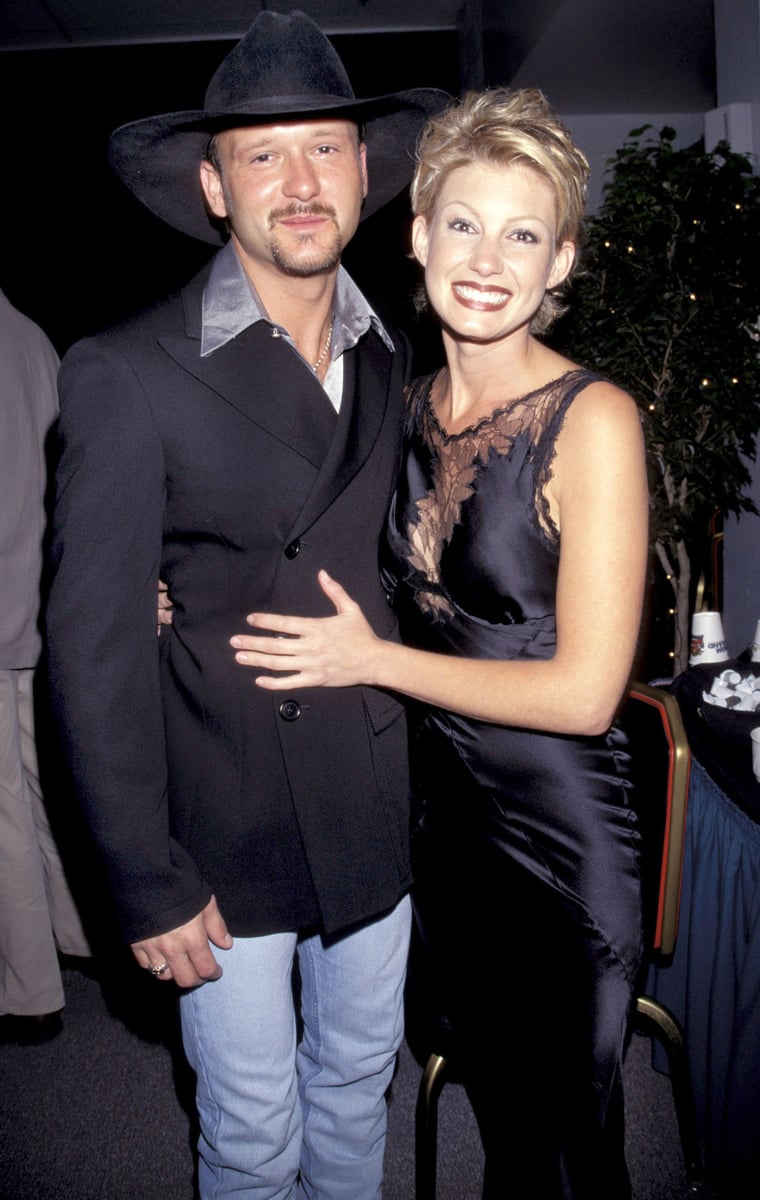 At their wedding, Hill was already three months pregnant.

In May 1997, the couple's first daughter, Gracie Katherine, was born.

That same month, their first single 'It's Your Love' was released. The song was number one on Billboard's Hot Country Songs chart for six weeks straight and won Single, Song, and Top Vocal Event of the Year at the 1997 Country Music Awards (CMAs).

In August 1998, their second daughter, Maggie Elizabeth, was born.

In 2000, the successful country singers joined forces for a joint national tour, named the Soul2Soul Tour.

The following year, in 2001, McGraw and Hill welcomed their third and final daughter, Audrey Caroline.

"I had a very dysfunctional childhood," Tim said in an interview with Billboard in 2017. "So I wanted what I didn't have: a stable family."

In interviews since welcoming their three girls, McGraw has explained that parenting will always come first for he and Hill, despite their busy schedules. 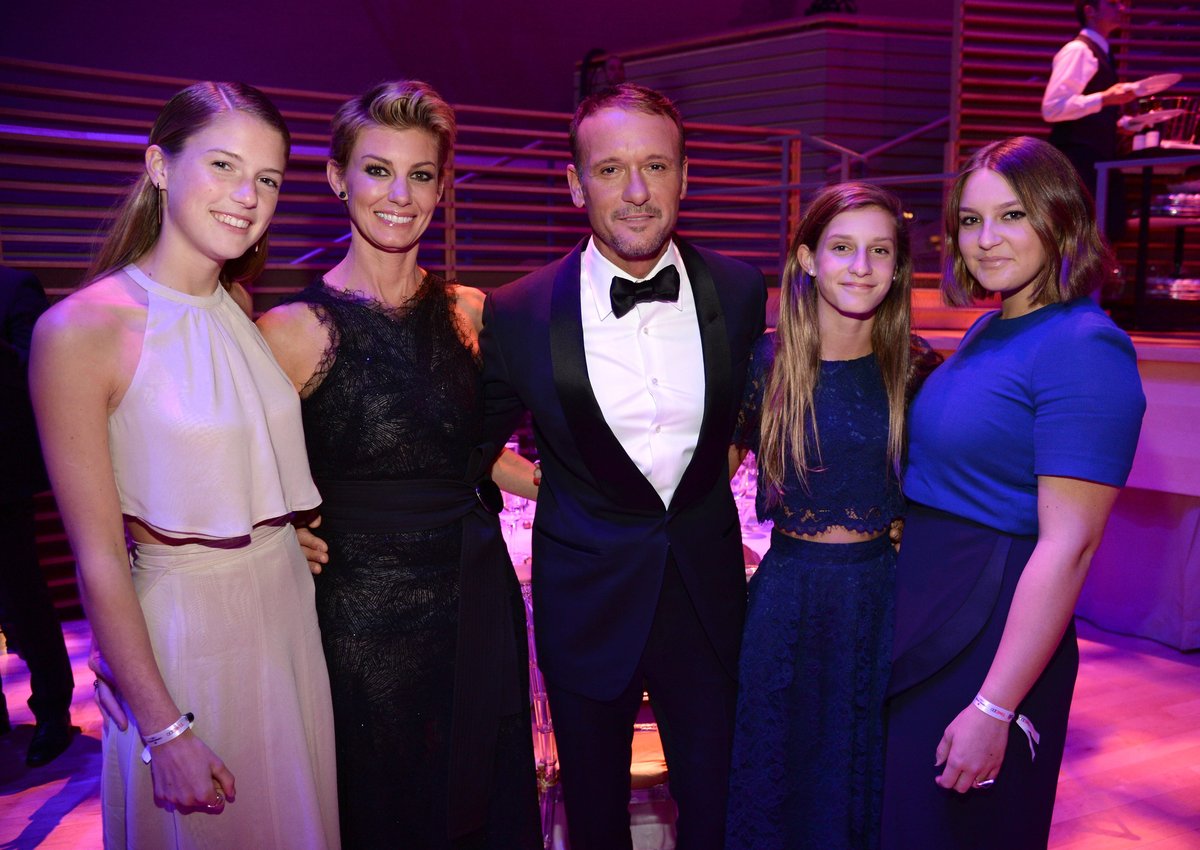 "When we first got married, we had a long talk about both of us doing this for a living — how are we going to navigate this? And we decided that we were going to put our family and our kids first," McGraw told actor Garrett Hedlund for Leo.

He also explained that he and Hill wanted to be there for all the important moments in their children's lives.

"When they started school and when we were home, we didn’t talk about business. Their friends called us Mr. and Mrs. McGraw. They all knew us as Gracie’s dad, or Audrey’s dad, or Maggie’s dad," he explained.

In 2003, the couple casually purchased a 20-acre island in Exumas, Bahamas. At the time of purchasing, it was almost completely undeveloped. Over the following nine years, the couple built a compound.

"We set out to build a house. We had no idea we had to build everything else," Hill told Architectural Digest in 2017. "We basically had to build a little town."

Following the success of their first tour together, McGraw and Hill went on their second national tour, Soul2Soul II Tour, in 2006. It was the most attended tour that year (out of any music genre) and at the time, it was the highest-grossing country tour ever.

Over the following years, the couple continued to write, perform and release albums together and separately. In 2010, instead of a tour, they performed a 20 show residency at the Venetian in Las Vegas.

In 2014, McGraw candidly opened up about his battle with alcohol and drugs for the Men's Health June/July cover story.

"I drank too much. I partied too much. And did other things too much. Chemically," he told the publication. "No needles or that kind of stuff, but... use your imagination."

He explained it was his wife and daughters that compelled him to quit partying completely.

"When your wife tells you it's gone too far, that's a big wake-up call," McGraw said. "That and realising you're gonna lose everything you have. Not monetarily, not career-wise, but family-wise. It got to the point where my kids were getting older, and it was way past the point that they noticed it. And I noticed that they noticed."

In 2016, the couple celebrated their 20th wedding anniversary. And while you'd assume they'd do something fancy, the couple's celebrations were rather low key.

"We are going to be in sweats, binge watching TV," Hill told Us Weekly.

In 2017, the couple embarked on Soul2Soul: The World Tour and released their first-ever joint album, The Rest of Our Life.

These days, the couple appear to be as in love as they were in their early days together. They also realise how lucky they are.

"It's such a rare thing to be able to experience what we do for a living, and to do it together, really feels like all the moments are special," McGraw told People in 2018.

"I watch him perform and still to this day I'm awed by it," Hill added.

But to maintain their spark, the couple keeps plenty of their professional lives separate.

"We both have our daily routines and we have our own dressing rooms," Hill told the publication. "We each have our own space to retreat to so we do get time to ourselves."

In 2021, McGraw and Hill announced they would be listing the "best place in the world", their private island in the Bahamas, for $35 million.

"Every time we land the plane and walk onto the beach and head up to the house, we turn to each other and say, 'This is the best place in the world,'" he told People.

These days, all three daughters have moved out of McGraw and Hill's Nashville home, which in a recent interview, McGraw described as bittersweet.

"Our youngest is 19 and living in New York City now, I mean, it’s crazy," he told Garrett Hedlund for Leo. "It goes by so fast. You think you’re giving them good life lessons. You know, as a parent — look, [laughs] you’re going to get half of everything wrong. That’s just the nature of it. There is no handbook with it.

"To look back now, over Faith and I’s 25 years of marriage coming up in October, and see where we’re at and see where our kids are, see how fast it’s gone by, it’s almost… it’s unfathomable how time flies," he continued.

"What starts happening is you start marking your time by their years. And the next thing you know, they grow so fast and it’s like every two years there’s a different child that you have as they age. It’s a beautiful thing, but it’s a sad thing at the same time," he said.