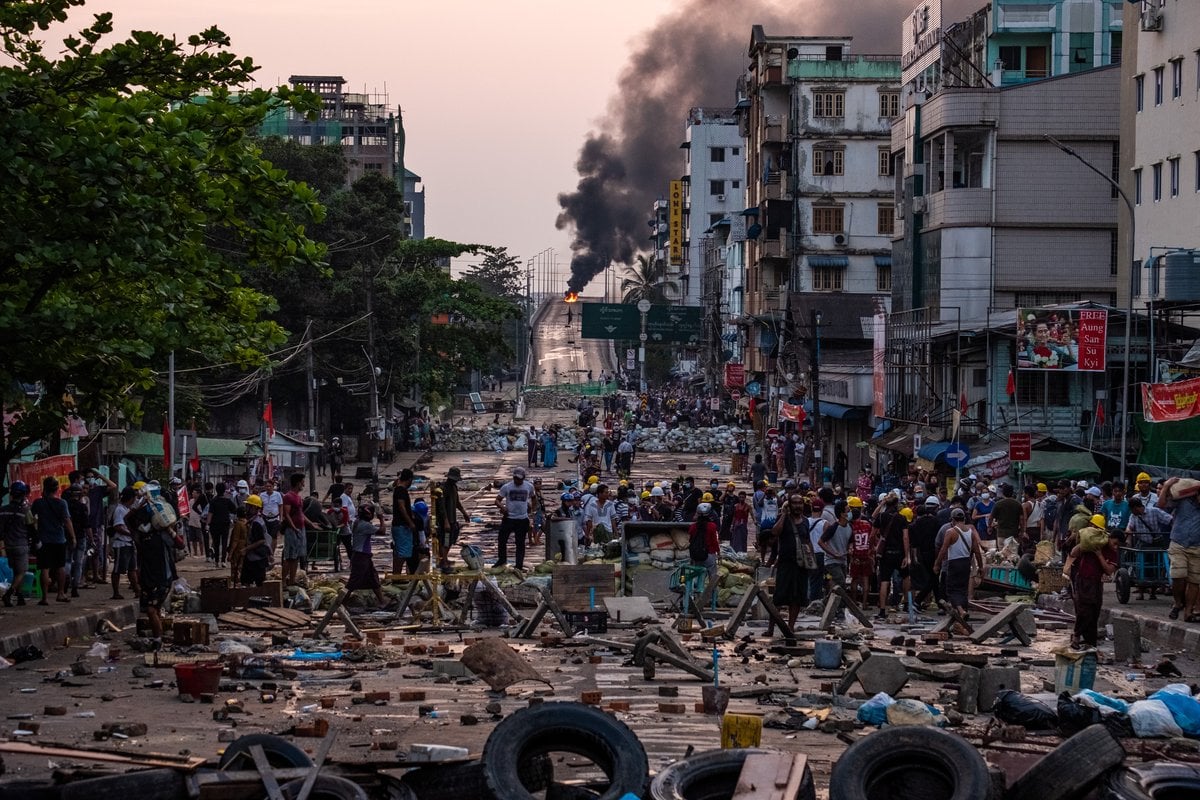 It has been over two months since Myanmar awoke to the military's attempt to dismantle their relatively new democratic government. Every day since, the junta has employed casual and deadly violence to suppress pro-democracy demonstrations.

Hundreds of civilians have been killed, thousands have been detained and millions more remain fearful for the future under the brutal control of the military.

The political unrest comes after Aung San Suu Kyi — who has now been detained — won the country's democratic election last year in a landslide. The military contested the election results, despite no evidence, and consequently took control of the government on February 1, declaring a year-long state of emergency.

Here are five facts of what's happening right now in Myanmar, a country of 54 million people.

1. At least 700 civilians have been killed since the coup.

According to the latest figures from AAPP, at least 706 people have now been killed by the ruling junta. This includes at least 46 children.

On Friday at least 82 people were killed in Bago alone, a city about 100 kilometres northeast of Yangon. It marked the biggest one-day total for a single city since March 14, according to reports from independent local media.

The military are employing brutal force to crush the persistent opposition of pro-democracy protesters.

“It is like genocide,” a protest organiser called Ye Htut told Myanmar Now. “They are shooting at every shadow.”

2. Over 3,000 civilians are currently detained or sentenced.

More than 3059 people are currently detained due to crackdowns by the military, according to AAPP.

Many of those detained were attending non-violent protests around the country and consider themselves part of a civil disobedience movement.

706 killed by this junta

3. It's been 10 days since Myanmar's internet was effectively shut down.

As of April 1, the junta ordered internet service providers to suspend wireless broadband services, according to digital rights organisation Access Now. This comes as mobile internet access was blocked on March 15.

The military is still allowing fibre optic and fixed cable internet, however Access Now reports that only a limited portion of people in Myanmar have access via these connections.

“From a political point of view, the major effect is on people’s ability to know what’s happening in the coup and take part in the movement against it,” Oliver Spencer, the legal director of the nonprofit 'Free Expression Myanmar', told Reuters.

Indeed, it's harder to share with the international community the human rights abuses occurring in Myanmar if citizens don't have access to Internet.

4. It is a crime to be a journalist inside Myanmar right now. 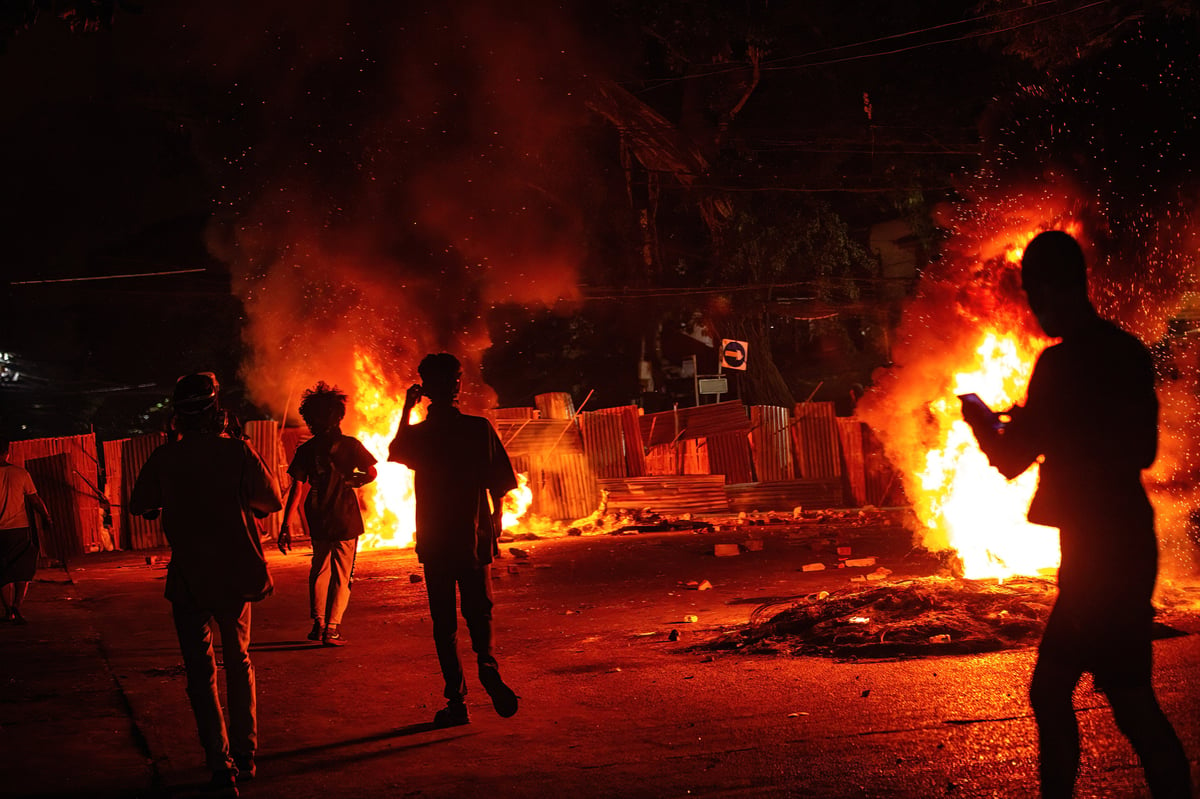 More than 700 people have been killed since the coup. Image: Getty.

Since the coup, journalists in Myanmar have been risking their lives to report on what is unfolding. It is a crime, under the military's Penal Code, to publish or circulate “any statement, rumour or report with intent to cause, or which is likely to cause fear or alarm to the public or to any section of the public whereby any person may be induced to commit an offense against the State or against the public tranquility".

The military-controlled government have clamped down on media coverage of anti-coup demonstrations by raiding media companies and detaining dozens of journalists. Some reporters have even been shot and wounded.

In the wake of the coup, the country no longer has a single independent newspaper in publication, according to Myanmar Now.

As a result, the country has seen a rise in 'citizen journalists' who are documenting the demonstrations via their phones.

“I know I might get killed at some point for taking a video record of what is happening. But I won’t step back,” one citizen journalist, Ma Thuzar Myat, told The New York Times.

Since the coup, millions of people have refused to turn up to work as part of the civil disobedience movement.

From shops to schools to hospitals, the nation's workers have essentially come to a halt, with the hope it will force military out of power.

Experts are saying Myanmar's economy is now in a free-fall, with one estimate from the Fitch Solutions projecting a 20 per cent contraction in GDP for the 2020-21 fiscal year, according to The Straits Times.

This is alarming news for a country that is already one of Asia's poorest nations.

Reply
Upvote
The military junta is never going to give up power and they don't care what the rest of the World thinks. Everyone who can get out, should now before the whole country ends up as a cross between The Handmaid's Tale and a mediaeval dictatorship. We must support the refugees on the borders.
News
General
Opinion
True Crime
Politics
Sport
Explainer
Entertainment
Celebrity
Reality TV
Movies
TV
Books
Rogue
Royal
Lifestyle
Beauty
Fashion
Weddings
Home
Wellness
Health
Fitness
Travel
Food
Parents
Before The Bump
Pregnancy
Baby
Kids
Teens
School
Parent Opinion
Work & Money
Money
Finance
Career
Lady Startup
Relationships
Sex
Dating
Separation
Friendship
Family
Real Life
Couples