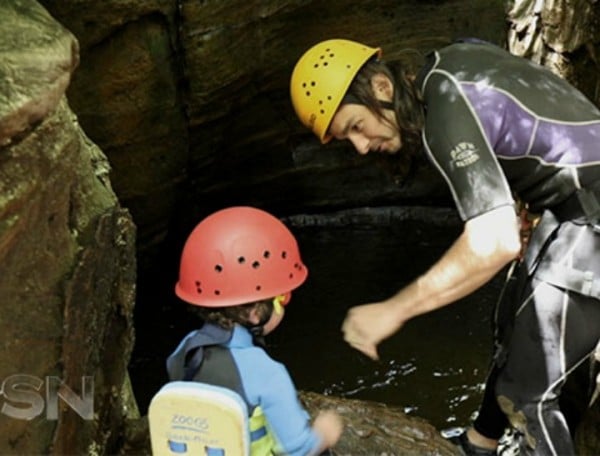 On last night’s episode of Sunday Night, we met parents who claim that the only way to raise strong, brave, and well-balanced kids is through a new global movement called ‘extreme parenting’.

The segment told the story of parents who take their children, some as young as four months old, on grueling physical adventures to teach them how to take calculated risks, recognise danger, face their fears, and build their character.

They also claim that overprotection of children has led to conditions such as ADHD, anxiety and depression, and that ‘extreme parenting’ is a logical cure.

James Castrission is a well-known Australian adventurer, who, along with his wife Mia, adopts this parenting style when it comes to his son four-year-old son Jack, and his eight-month-old daughter Charlotte.

The adventures began when Jack was only four months old.

“At four months we took him on his first overnight bush walk in the Blue Mountains so he was on a baby carrier on my front and a big pack and Mia was carrying some of our food and clothing for the night,” says James.

“People that don’t know these kind of environments would think “man that is crazy what he is doing with his kid.”

But James maintains that “smothering” children is the real issue we need to be talking about.

“A huge body of research has come out showing a direct correlation with spending time in nature, pushing a kids boundaries and a whole lot of great developmental benefits.

“Kids who aren’t getting in nature unfortunately they have got high rates of obesity, whole lot of behavioral problems, ADHD.”

“Although a lot of parents want to protect their children, by smothering them in these highly controlled low risk environments we are actually doing more damage than good for them”

“What concerns me is that there are so many young kids now who are under the age of six for example who are on anti-depressants and on anti ADHD medications… maybe if they did something more outside and connected with nature they would probably have less of these issues of anxiety and depression.”

However, there is always the possibility of very real danger.

Patrick Sweeney is a US climber who took his children, PJ, aged nine and Shannon, 11, on an expedition to climb Mount Blanc in 2014. Sweeney was trying to break the record for the youngest person to reach the peak, previously set by a ten-year-old boy from London. But the family were put in a great degree of danger when an avalanche in the 'Corridor of Death' forced them to turn back.

At the time, the local mayor criticised Sweeney's "recklessness", and the president of the national mountain guides' union denounced Sweeney's behaviour, berating him for "trying to break the record for stupidity." Many felt that Sweeney was exploiting his children, who aren't mature enough to be aware of the risk involved in such dangerous expeditions.

Sweeney recalls, "hearing Shannon scream certainly stopped me in my tracks...[but] I was never fearful for their life."

Like Castrission, Sweeney thinks the bigger issue is parents who shelter their children from all life has to offer.

"I call them bulldozer parents, parents are trying to pave the smoothest path possible for their kids, they are trying to make everything perfect," he says.

According to Sweeney, attitudes towards 'adventure education' are culturally relative, with schools in France encouraging outdoor activities far more than those in the US. He says that in France, "every kid is skiing, playing ice hockey, is rock climbing, is paragliding."

So, what's your take? Does extreme parenting outrage or inspire you?