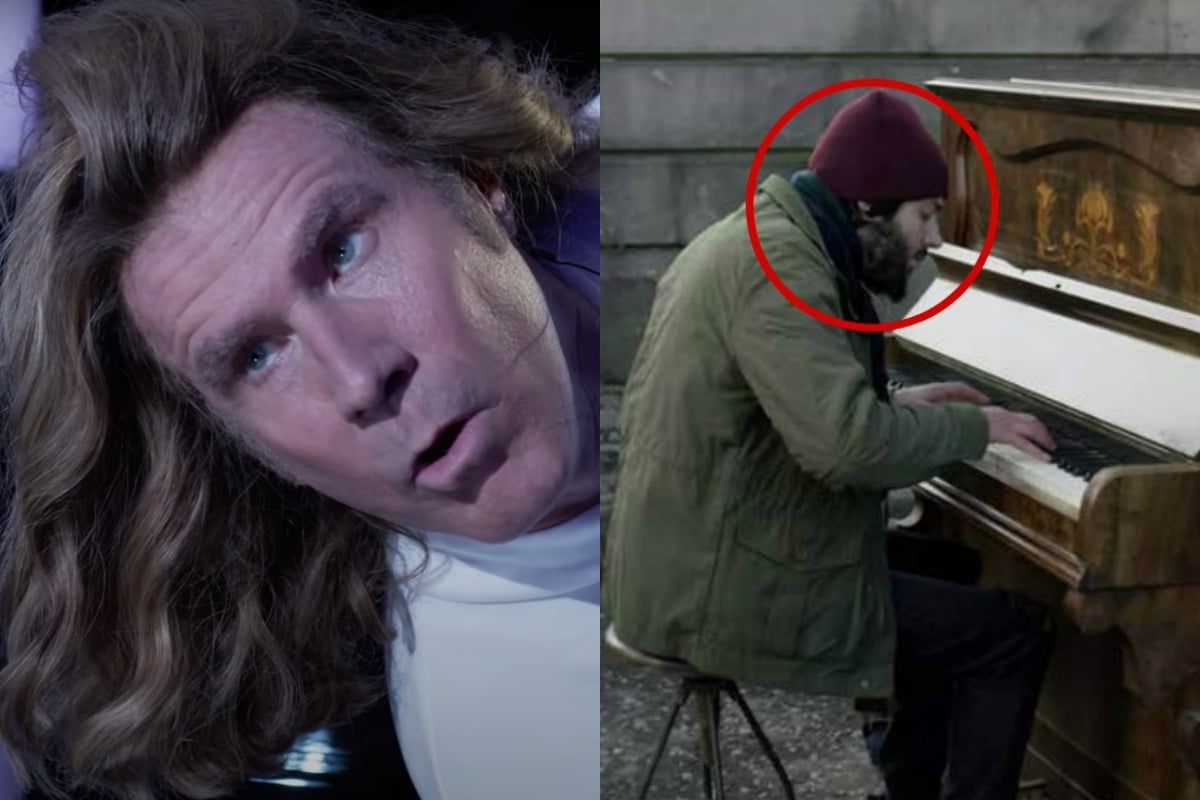 Eurovision Song Contest: The Story of Fire Saga is the wild new Netflix film everyone is talking about. And it's not hard to see why.

The bizarre yet heart-warming film follows the story of small-town Icelandic musicians Lars (played by Will Ferrell) and Sigrit (played by Rachel McAdams) who take to global music competition, Eurovision.

Watch the trailer for Eurovision Song Contest: The Story of Fire Saga. Post continues below.

If you don't let yourself get distracted by the film's outrageous costumes (and Dan Stevens' performance) you may notice The Story of Fire Saga is packed with hidden details, Easter eggs and subtle Eurovision references.

Here are seven small details you might have missed in Eurovision Song Contest: The Story of Fire Saga.

All the cameos from previous Eurovision contestants.

Not only does The Story of Fire Saga give us a look at the mystifying and sparkly world of Eurovision, but the film goes the extra step and features cameos from a bunch of past contestants and winners.

The first cameo can be spotted when Lars and Sigrit tour Edinburgh and come across a man playing the piano on the street. The pianist is actually Portuguese singer Salvador Sobral who won Eurovision back in 2017. 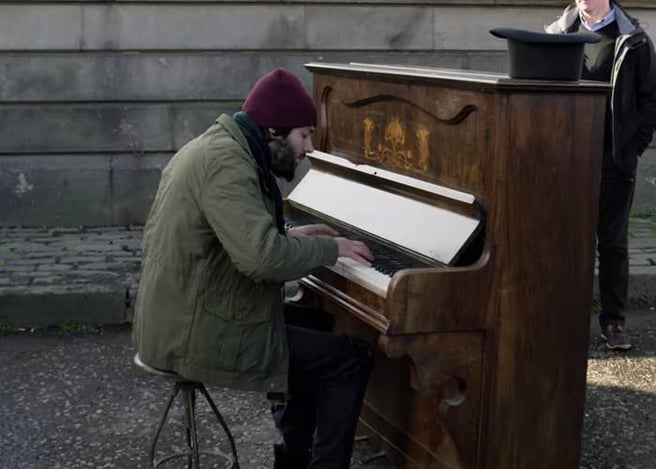 The singalong scene in the film also features cameos from some of the biggest Eurovision acts. These include;

Speaking of past Eurovision acts, the film's hilarious hamster wheel scene is actually an homage to a particular performance that took place in 2014.

In the scene, Lars and Sigrit fall off stage after Sigrit’s scarf is caught in the hamster wheel with Lars inside. This idea was borrowed from one of Ukraine’s Eurovision entries which featured a dancer performing in a wheel while Mariya Yaremchuk sang around it.

Unlike the movie, Mariya's performance didn't end in disaster. 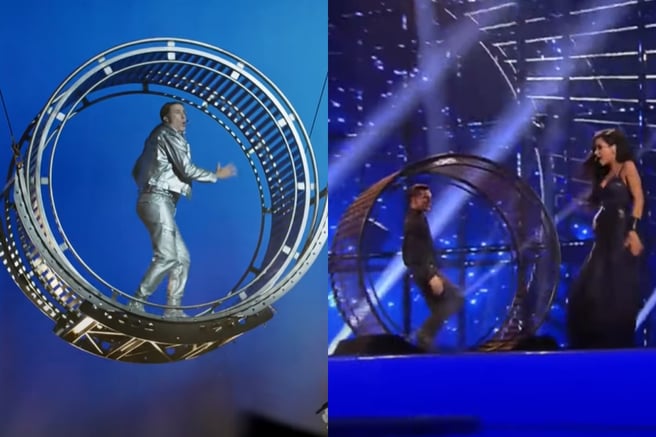 No Eurovision movie would be complete without ABBA. The Swedish band won the contestant in 1974 with their hit song 'Waterloo' and are referenced multiple times throughout the film. Their performance is the reason Lars wanted to enter the competition in the first place and 'Waterloo' is later sung during the singalong scene.

In the film, the Eurovision competition is commentated by British talk-show host Graham Norton. In real life, Norton is known for his (sometimes savage) commentary of the singing contest for the BBC. 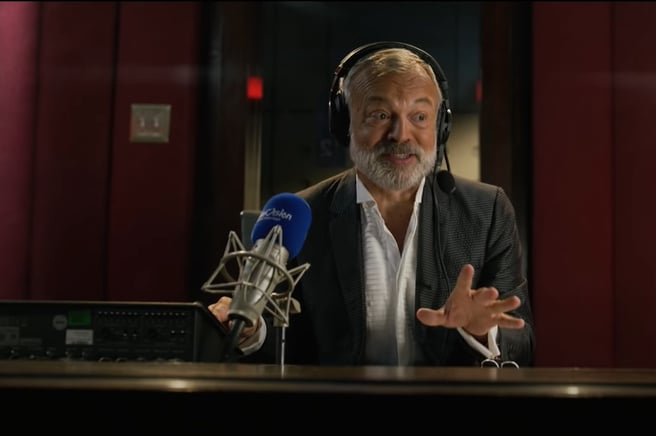 The film jokes that the chance of the United Kingdom winning Eurovision is very unlikely. In real life, the UK hasn't exactly had a great track record either.

While the UK has won the competition five times, their last win was back in 1997. The UK has also not reached the top 10 in the finals since 2009 and have been in last place four times since 2000.

The Story of Fire Saga has become known for its unique and catchy songs, including the much-loved 'Jaja Ding Dong'.

If you listen closely, three of the band's songs, 'Svefn-G-Englar', 'Hoppipolla', and 'Untitled No. 3' play in the background of some scenes throughout the film.

The real-life artists who inspired the performances. ﻿

During the semi-final, you'll notice a group called Moon Fang, who are dressed in horned demon costumes. The band are quite clearly dressed like Finnish heavy metal band, Lordi, who won Eurovision back in 2006. 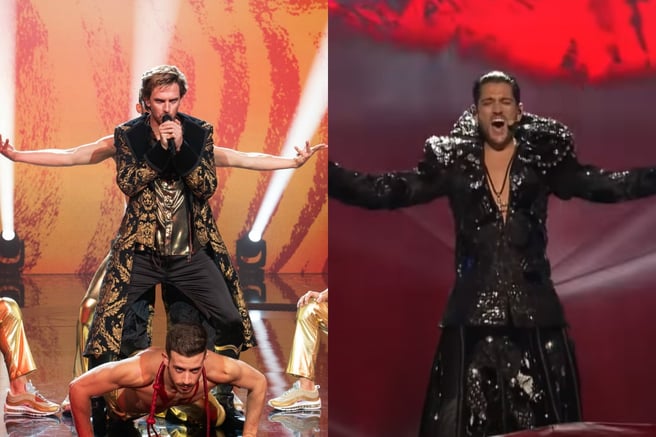 Dan Stevens' performance of 'Lion of Love' is also believed to be inspired by past Eurovision acts. According to Stevens, his character, Alexander Lemtov, is loosely based on Russian singer Philipp Kirkorov, who entered the competition in 1995. The song his character sings is also similar to a performance by Romanian group Cezar, who competed in Eurovision in 2013. Their performance featured a vampire-like costume, near-naked male dancers and operatic vocals.

Have you watched Eurovision Song Contest: The Story of Fire Saga? Let us know what you thought in the comments below.

Eurovision Song Contest: The Story of Fire Saga is streaming now on Netflix.

Reply
Upvote
The song-along was an awesome scene. It was great to see all the familiar faces.
All cameos are in one place on this version of the scene: https://www.youtube.com/watch?v=LJWBYE1xFc4 .
Information "pops" on screen as cameos appear with additional tidbits
R
rush 2 years ago

Reply
Upvote
1 upvotes
Bilal is from France, not Israel. He competed in Israel. Having all the past contestants was fun, although if you're not familiar with Eurovision it's probably not very clear who they all are, I was a bit confused by a couple of them. And the 'songalong' part was autotuned to hell, which is a shame, because they are all genuinely talented singers.
The biggest problem I had with this - how old is Will Ferrell's character supposed to be? Because he was about 6 or so when ABBA won, so that makes him 50-something in the film, right? And Rachael McAdams is supposed to be a couple of years younger? Dan Stevens was pretty funny though. And thank god they didn't let Pierce Brosnan sing!
Also: if you haven't seen it, go to YouTube and have a look at 'Love Love, Peace Peace', the interval song from when Sweden hosted a few years ago. Gives me a chuckle every time. 🤩
Resources
Very Peri
Skin
News
General
Opinion
True Crime
Politics
Sport
Explainer
Entertainment
Celebrity
Reality TV
Movies
TV
Books
Rogue
Royal
Lifestyle
Beauty
Fashion
Weddings
Home
Wellness
Health
Fitness
Travel
Food
Family
Before The Bump
Pregnancy
Baby
Kids
Teens
School
Parent Opinion
Work & Money
Money
Finance
Career
Lady Startup