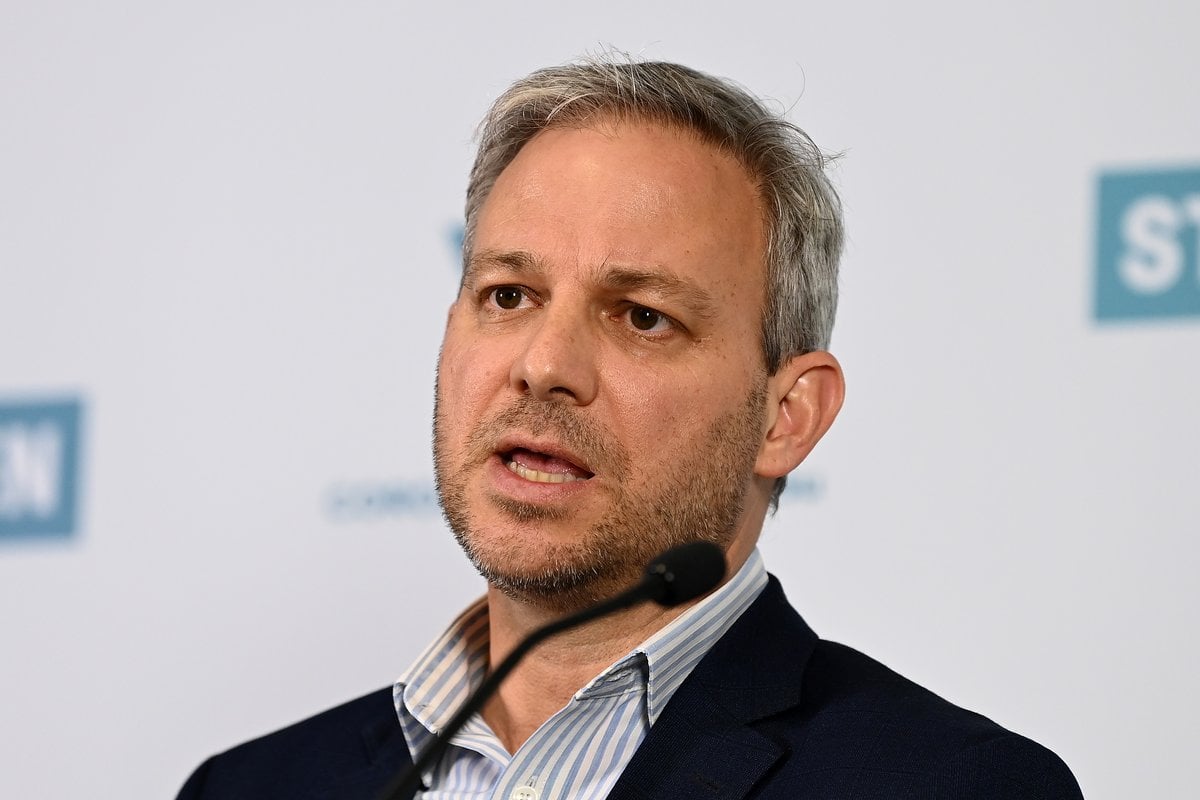 "We have to ready ourselves." Victoria confirms four new COVID-19 cases.

Four new COVID-19 cases have been uncovered among a family in Melbourne's north.

Health authorities were alerted to the cluster after a man from Whittlesea presented for testing on Sunday, after experiencing symptoms since May 20.

He and an asymptomatic male relative from a separate household both tested positive.

Two other close family contacts - a woman and a pre-school aged child - have also since been confirmed as COVID positive.

The source of the infection remains unknown.

Victoria's Chief Health Officer Brett Sutton said on Monday afternoon that "we have to ready ourselves for any other positives".

Dr Sutton added that the risk of community transmission is higher in the colder months, explaining: "We are going into a period where people spend more time indoors and are in closer proximity."

The following have been identified as exposure sites, with people who have attended these venues at these times required to get tested and to isolate until further notice:

The Italian rock band that won the Eurovision Song Contest returned home Sunday to the adulation of fans and so much speculation that the lead singer had snorted cocaine during the show that he offered to take a drug test.

But he offered to take a drug test upon his return to Rome to put the matter to rest and refute social media speculation fuelled by footage of him bending over a table during the competition.

The band was the bookmakers' favourite going into the Eurovision finale and sealed the win early Sunday with the highest popular vote in the enormously entertaining, and incredibly kitsch, annual song festival.

The group's Victoria de Angelis told a news conference the win was an important boost for Italy, one of the European countries worst hit by COVID-19.

"This is a message of hope after this hard year we've been through," she said.

If you didn't know you needed stomping Italian glam-rock in your life...well you certainly do now. #Eurovision #OpenUp #Italy pic.twitter.com/M76Btzme9z

Italy trailed Switzerland, France and Malta after the national juries delivered their votes but was propelled to victory by votes from the viewing public.

Australian experts back AstraZeneca jab for patients with history of blood clots.

The Australian Technical Advisory Group on Immunisation has issued new advice confirming the safety of the AstraZeneca COVID-19 vaccine for people with a history of many blood clotting disorders.

In a joint statement released on Sunday, ATAGI and the Thrombosis and Haemostasis society of Australia and New Zealand (THANZ) said there were "no known markers for increased risk" from the vaccine.

It said Australians who have a family history of blood clots or incidences of deep vein thrombosis do not have a higher chance of vaccine-induced thrombotic thrombocytopenia after taking the vaccine.

Australia's chief vaccine safety body has issued new advice affirming the safety of the AstraZeneca COVID-19 vaccine for people with a history of many blood clotting disorders. #9News https://t.co/Cn6Ou99gq4

Australia reached 500,000 COVID-19 vaccinations in a week for the first time as the rollout topped 3.6 million. However, it is still shy of the four million that the Morrison government had initially promised by the end of March.

Still, the government continues to press the case for people to get the jab as soon as they are eligible.

Over 50s have been able to get an AstraZeneca jab over the past couple of weeks, although there are concerns some may wait until later in the year for the Pfizer vaccine when 20 million doses arrive over the fourth quarter.

Ten million Moderna doses are also due later in the year.

"The message is very simple. Do not wait to be vaccinated. If you are in a qualifying group, please come forward now," Health Minister Greg Hunt told reporters from Melbourne on Sunday.

"Vaccination can save lives and protect lives, and if you are not vaccinated and you do catch COVID, you can die."

There were no locally acquired COVID-19 cases reported in the past week, but NSW and Victoria both reported new infections in quarantine on Sunday.

Meanwhile, the second repatriation flight from India since the government lifted its ban landed in Darwin on Sunday with 165 Australians on board.

Desmond became the first woman to win a Gold Logie, for her variety show The Lorrae Desmond Show, in 1962.

But she was best known for playing Shirley in the long-running A Country Practice, appearing in more than 800 episodes in the 1980s and early '90s.

She graced our TV screens for decades. Perhaps best known and loved as nurse 'Shirley Gilroy,' in A Country Practice. Lorrae Desmond is being remembered as a singer and actress with an enormous heart after she died aged 91. https://t.co/8iYdM6v9TM 7NEWS at 6pm. #7NEWS pic.twitter.com/QflGbXiV20

Desmond was born in the New South Wales town of Mittagong and her writing and performing career spanned more than half a century.

She represented the United Kingdom in the Eurovision Song Contest in 1957, before returning to Australia in the 1960s.

During the Vietnam conflict, she toured the country giving live performances for troops, for which she was awarded an MBE.

The Israel-Hamas ceasefire has held through a third day as Israeli police admitted Jewish visitors to a contested Jerusalem holy site.

Earlier confrontations with Palestinian protesters at the site helped to ignite the cross-border Gaza fighting.

Police reported no unusual incidents at the al-Aqsa mosque compound - one of Islam's holiest sites - on Sunday as Israeli social media accounts showed a few dozen Jews in religious garb strolling around the site under guard.

Police raids in and around al-Aqsa during Ramadan, as well as planned evictions of Palestinians from homes claimed by Jewish settlers in East Jerusalem, drew long-range rocket attacks by Islamist Hamas on May 10.

That led to the fiercest fighting between Israel and Hamas since a 2014 conflict, which concluded with a truce before dawn on Friday, brokered by Egypt with support from the United States.

Neither side reported violations on Sunday morning.

Egyptian mediators have been shuttling across the Gaza border and met Hamas's West Bank-based rival, Palestinian President Mahmoud Abbas, in an effort to sustain the ceasefire.

Palestinian officials put reconstruction costs at tens of millions of US dollars in destitute Gaza, where medical officials said that 248 people were killed during the 11 days of fighting.

NRL great Bob Fulton died on Sunday at the age of 74 after a long battle with cancer with tributes flowing throughout the day for the revered Immortal.

Fulton made his debut with Manly in 1966 and was a part of the club's first three premierships, playing centre or five-eighth.

His most famous performance came in their 1973 grand final success, where he scored two tries in the 10-7 win over Cronulla.

Fulton's career was ended prematurely at 269 games when he was cruelled by a knee injury in 1979. He had played 35 Tests for Australia and 16 matches for NSW.

Such was his influence as a player, he was inducted as one of the sport's first four Immortals alongside Johnny Raper, Reg Gasnier and Clive Churchill in 1981.

At least 14 people have died and a child is seriously injured after a cable car linking Italy's Lake Maggiore with a nearby mountain plunged 20 metres to the ground.

The Stresa-Mottarone cable car takes tourists and locals from the town on Lake Maggiore, almost 1,400 metres above sea level to the top of the Mottarone mountain in 20 minutes.

"We are devastated, in pain," Marcella Severino, Stresa's mayor told broadcaster RAI, while Italian Prime Minister Mario Draghi voiced his condolences to the families of the victims.

The cable car was travelling up the mountain when the cabin fell some 20 metres to the ground and rolled several times down the steep slopes before it was stopped by trees, Severino said.

At least 14 people died when a cable car taking visitors to a mountaintop view of some of northern Italy’s most picturesque lakes plummeted to the ground, authorities say. A young child is hospitalized in serious condition with broken bones. https://t.co/mLMAAzJsbK

People hiking nearby heard a loud hiss just before the crash, she said, adding that the accident was believed to have been caused by one of the cables breaking.

Italy's alpine rescue service said a call had first come just after midday, adding that the cable car was lying "crumpled" in the woods and two children were taken by helicopter to a paediatric hospital in the nearby city of Turin.

Severino said that some of the victims had been found trapped inside the car, with others thrown out into the woods.

The youngest child, estimated to be five years old, was conscious upon his arrival at the hospital and spoke Italian. He was undergoing surgery to stabilise multiple fractures.

The COVID-19 pandemic has dealt a significant blow to gender equality in the Australian workforce, a new report reveals.

Three quarters of Australian women say their workload has increased since the onset of the pandemic, women's job satisfaction has declined from 69 to 47 per cent, and nearly half of working women are feeling less optimistic about their career prospects than they were before the pandemic.

The results of a survey of 500 Australian women are revealed in a new report from Deloitte Global, "Women @ Work: A Global Outlook".

The firm also interviewed 5000 women across ten countries, with similar trends in each.

- A set of "irreplaceable" gold rosary beads carried by Mary Queen of Scots to her execution in 1587 are among historic treasures worth more than one million pounds ($A1.83 million) stolen in a raid at Arundel Castle.

- Virgin Galactic has launched its third successful spaceflight, paving the way for paying customers to go into space later this year.

- American gymnast Simone Biles has made history, becoming the first woman to ever land a Yurchenko double pike in a competition.

Reply
Upvote
2 upvotes
Do people really think the Italian singer  would be snorting cocaine in a room with 3,500 other people - with a camera right in his face? I'd be almost as insulted by people thinking I was that stupid as by the accusation of drug use. It was a good show last night, and a pretty tight one in the end. As always, a lot of the acts I really liked came near the bottom, and the ones I thought weren't all that great nearly won (Switzerland). I did feel bad during the public vote counting, every time they said "the public have awarded you... zero points". Poor UK!

Reply
Upvote
2 upvotes
Coke disappears from the system pretty fast, so that test won't amount to much.
Pretty far gone in to a habit, to be doing lines in that public a setting.

Reply
Upvote
1 upvotes
@gu3st They might opt for hair follicle testing - much harder to fudge.

Reply
Upvote
@gu3st Sure but it didn't look like he was snorting cocaine anyway. His head was down and up again pretty quickly and didn't come close enough to the table to have snorted anything.  The whole controversy was ridiculous.

Reply
Upvote
2 upvotes
@fightofyourlife he's tested negative, thank goodness, but what a stupid, unnecessary "controversy". These young people should be enjoying their win after a really shitty year and a half, instead they're having to defend themselves because some dipsticks on Twitter took two seconds of TV footage out of context.