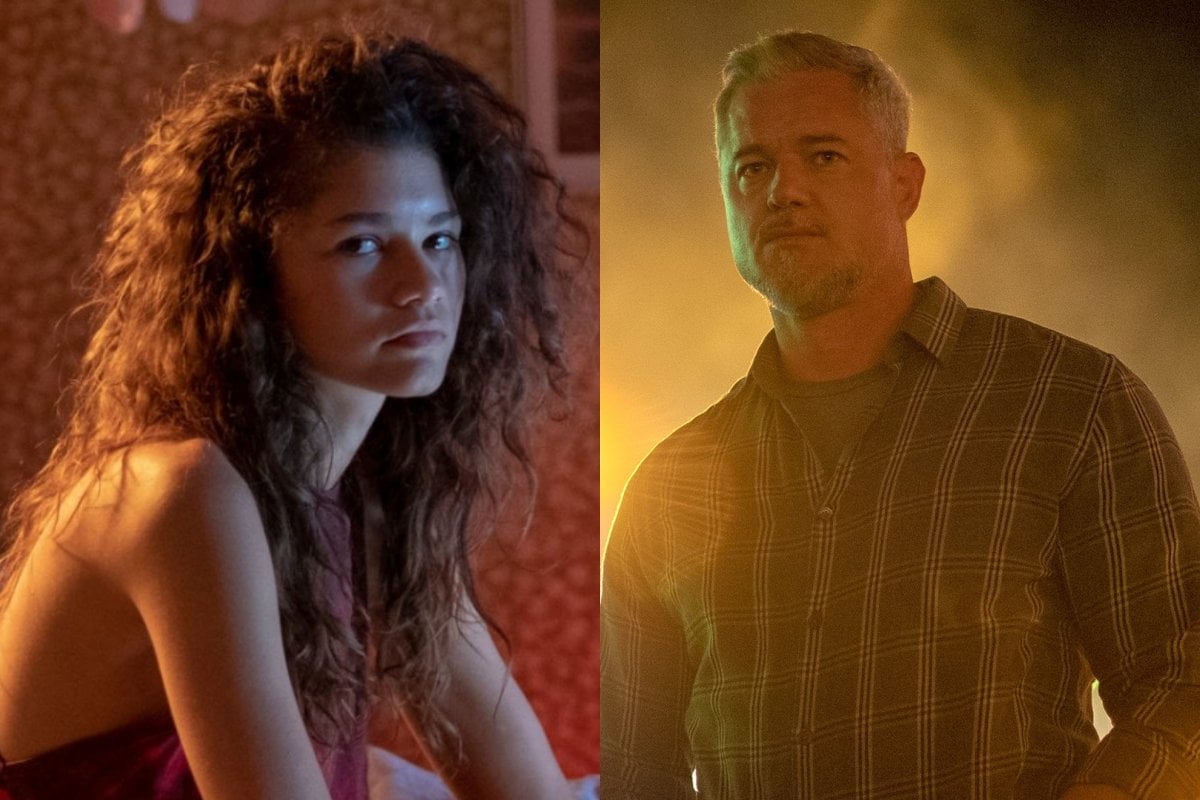 If you haven't binge watched Euphoria yet, chances are you've probably heard a whole lot about it.

In a nutshell, the gritty HBO teen drama follows a group of high school students as they navigate love and friendships in a world of drugs, sex, trauma, and social media.

It's also pretty heavy, so please proceed with caution. But if like us, you're hooked on the teen drama, we've got plenty of behind-the-scenes gossip to share with you.

From filming intimate scenes to a huge celebrity fan, here are all the secrets you probably didn't know about Euphoria:

The creator collaborated with the cast members to bring their storylines to life.

If Euphoria feels fairly true to life (outfits and makeup aside), that would be thanks to the creator and cast's collaborative effort to bring personal storylines to life.

Show creator, Sam Levinson, was a drug addict for years and still battles with depression and mental health issues, which he opened up about at a panel discussion.

He also made a priority of flying both Hunter Schafer (who plays Jules) and Barbie Ferreira (who plays Kat) down to LA prior to filming to speak with them about their own lives as a trans woman and plus-size woman, respectively.

Kat's reaction to the micropenis in episode three was 100 per cent real.

In an interview with Entertainment Weekly, Barbie Ferreira opened up about that micropenis scene from season one, and it turns out she was just as surprised as the rest of us by her first cam sesh.

When asked about how the showrunners made the shoot a 'comfortable environment' for the actress, Barbie confessed that seeing the penis was optional, but she opted in to get a more "genuine reaction".

"I was very vocal about like 'I would like to see it. I want to see it because I want to have a genuine reaction, and that kind of interaction can only really be done if I can see it and have the surprise with everyone else,'" Barbie said.

"They explained to me what I was doing, they asked me if I was comfortable with it. I’m not skeeved out by a micropenis prosthetic, like my reaction in that scene is what really happened. I was laughing.

"I loved that day. I remember going home smiling. I had an adrenaline rush because it was so cool having a genuine reaction to something and having that be the start of Kat’s exploration of manipulating of men."

Eric Dane wore a prosthetic penis during the full-frontal scene in episode one.

"Those scenes are very difficult to shoot," Dane reflected to EW.

"It helps to have one voice in your ear. One voice that you can express your feelings to, and somebody that is an advocate for the actors. It just simplifies a lot of things and makes for a safe and comfortable environment while shooting something that is fairly uncomfortable to shoot. And certainly, the stuff that we did in the pilot is no exception. It’s a pretty intense scene."

He added he was happy to be naked while filming if it was necessary to the story, although his scene featured a prosthetic penis.

"I’m willing to do anything that’s critical to the story and crucial to creating a very real and truthful feel to how the story is gonna go down," Dane said.

"Using a prosthetic is sort of protocol. It’s protocol, and it’s also very considerate to your scene partner...

"There was one isolated shot that I suggested, ‘Look if it makes more sense to not use a prosthetic, I’m willing to go there.’ At the end of the day, because of the context, we decided that the prosthetic was the way to go, and we came to that decision as a group."

After a killer first season, Barbie Ferreira's character, Kat Hernandez, has been appearing less than we would have liked — and it turns out there might be a very sneaky reason for it.

Instagram account Deumoix released an anonymous tip that claimed Ferreira wasn't "vibing" with Kat's character progression in season two, and it even led to the actress leaving the set.

"Barbie got into it with him on set and left one day. He then cut a lot of her lines," they said.

Euphoria tea on deuxmoi 🧐
Not to root for Barbie Ferreira but yeah.... director did her dirty. Those viking/influencers scenes were ridiculous 💀 pic.twitter.com/nCWJKZYuk6

Ferreira notably didn’t attend the second season premiere which fuelled speculation, but in an interview with The Cut, Barbie explained the script had a significant reshape for all characters.

"Kat’s journey this season is a little more internal and a little mysterious to the audience," Ferreira said.

"She is secretly going through a lot of existential crises.

"She loses her marbles a little bit—just like everyone else in this season," Ferriera continued. "The theme is everyone’s gone a little crazy."

Before casting, Levinson made a vision board for Rue, and Zendaya was on it.

Euphoria was a step outside of Zendaya's typical acting gigs when it first dropped in 2019, as the actress explained to Entertainment Weekly at the time.

But when her manager suggested she take a look at the script, the 25-year-old was immediately hooked.

"I got the script and raced through that first episode. I read it so fast. I was just glued to it and felt so connected to Rue immediately in some crazy way," Zendaya said.

"I asked to have a meeting with Sam and [Euphoria's] pilot director, Augustine Frizzell, who is brilliant but I sat down and had a talk with them about the show. Sam told me that I was on his vision board for Rue, which I thought was crazy.

"I was like, “I don’t believe you. What in my career have I done to prove that I can do this?"

We couldn't picture Rue being played by anyone else.

Sydney Sweeney was "grossed out" by season two's spa scene.

Season two, episode four featured one particularly rogue spa scene (you know the one) that left Sydney Sweeney "grossed out" and frankly, we don't blame her.

To jog your memory, Sweeney's character, Cassie, is having a rough night at her best friend Maddy's birthday party while trying to hide her relationship with Nate.

Over the night, Cassie gets progressively more and more drunk and disorderly before the episode comes to a head and she vomits in the hot tub.

"During the hot tub scene, during the throwing up, I got really grossed out," she said in an interview with Decider.

"They had this invisible tube that looked like a horse bit and they put it in my mouth and I had to somehow hold and make it look semi-normal and then throw up over everyone which was… it was so gross." 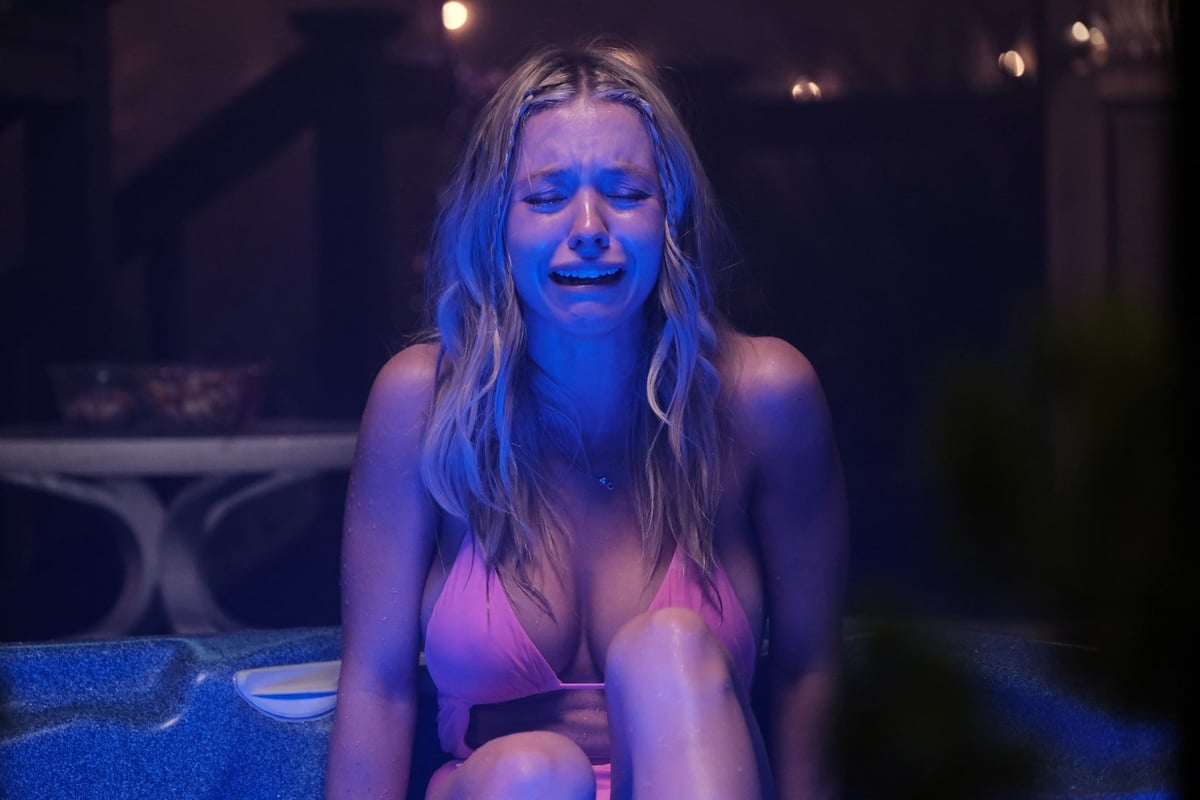 "Every shot [director Sam Levinson] wanted her to be drinking a different bottle,” Sydney added of her character, Cassie.

"So if you notice, every single shot she has a completely different bottle in her hands. By the end of that episode, I’m like, how many drinks is she in? She was gone."

We love the attention to detail.

Leonardo DiCaprio is a big fan of the show.

... And yes, the cast of Euphoria have absolutely shared the evidence in their group chat.

On the red carpet for Once Upon a Time in Hollywood in 2019, a Variety reporter asked DiCaprio: "What shows do you watch?" to which the star responded:

"I just watched Euphoria, which was amazing. That show is amazing."

Leonardo DiCaprio: "I just saw #Euphoria which is amazing" pic.twitter.com/G1ecmhhf3Y

Euphoria season one and two are streaming on Binge now.