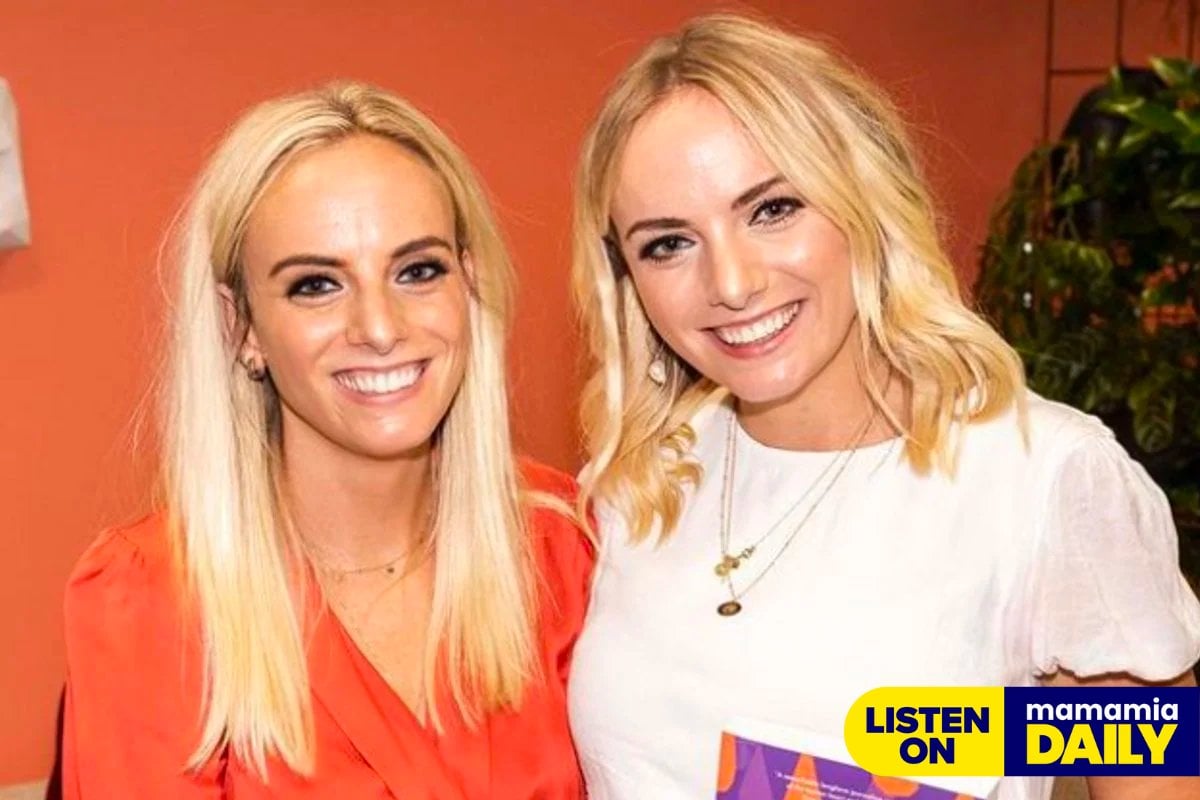 On a windy day in May, Clare's partner of 14 years - Rory - proposed on a beach on the New South Wales north coast.

He proposed with our grandmother's ring. Clare cried. A man in a ute yelled CONGRATS halfway through, it was perfection.

He pretended he wanted a photo in front of a beautiful archway, but the photographer (Rory) was actually filming. Luca got down on one knee and Jessie yelled.

But there was drama afoot.

Because when two women get engaged within a similar timeframe, especially if they're best friends/sisters/twins, there must be gossip. Some complicated emotions. Unspoken tension.

Somebody needs to hit somebody.

It's the plot of a romcom where one woman ruins the other's wedding and no one ends up getting married after all. Because HOW ON EARTH CAN TWO WOMEN GET MARRIED IN CLOSE PROXIMITY AND HAVE IT NOT BE A COMPETITION.

We recently asked people for their uncensored, anonymous questions on the situation, so we could answer them. These are our answers:

Clare, are you angry at Jessie?

I mean, always, but not specifically about the engagement?

I was there when Luca proposed to Jessie, and no part of me felt annoyed or resentful.

Some people seem to think I'm secretly annoyed because Jessie's engagement takes the attention away from me, but a) I don't want any attention... thank you, and b) that's not what any of these life milestones are about.

There aren't any 'rules' and I'm not the sort of person who has spent a lot of time thinking about my engagement or my wedding. There's no fairytale that's been destroyed or engagement bubble that's been burst.

Tbh one of my first thoughts was that we can go shopping for dresses together which could be fun?

Jessie, are you angry at Clare?

No, not at all. I didn't expect the proposal because I was so distracted by Clare's engagement. I just feel very happy for her. The only people I think it might be a bit hard on is our parents and our best mates who suddenly have two weddings coming up and that might be... stressful.

Did your partners' know?

Yes - Luca and Rory had discussed their plans and worked out the timings together. So they're not going to hit each other which is convenient.

Are you going to have a joint wedding?

Although... in this economy.

Jessie suggested this early on, but she insists she was joking, which I (Clare) don't believe.

With that said, our Nana and her sister had a joint wedding, and honestly, good on them for being economical and efficient.

How about a joint hens?

At first it was a big 'ol NO but now that we've both started to look into the cost of a wedding...

And everything associated with it...

How do you decide who gets the first wedding?

Clare literally said the words, 'I call dibs on getting married first,' and all siblings know you can't argue with that.

It's set in stone. No negotiating.

What if you want to get married at the same place?

We don't, but we'd probably talk about it/fight about it/play vicious mind games until the issue was resolved. Like normal people??

We've got quite distinct ideas of what we want so that helps.

What if you want the same dress?

Thankfully, Jessie has horrible taste so that won't happen.

When... when are you going to yell at each other? And attempt to gouge each other's eyes out?

At some point, but we doubt it will be wedding-related. That's just a normal Wednesday.

Look, it is quite strange. We've shared a womb, a birthday, a family, most of our friends, and now we're sharing an engagement. But our lives have never been any different, so it feels natural to experience this phase together.

Getting engaged is not something we've always 'aspired' to, and we haven't grown up dreaming about our weddings. Neither of us are competitive about any of it, because it's not a competition.