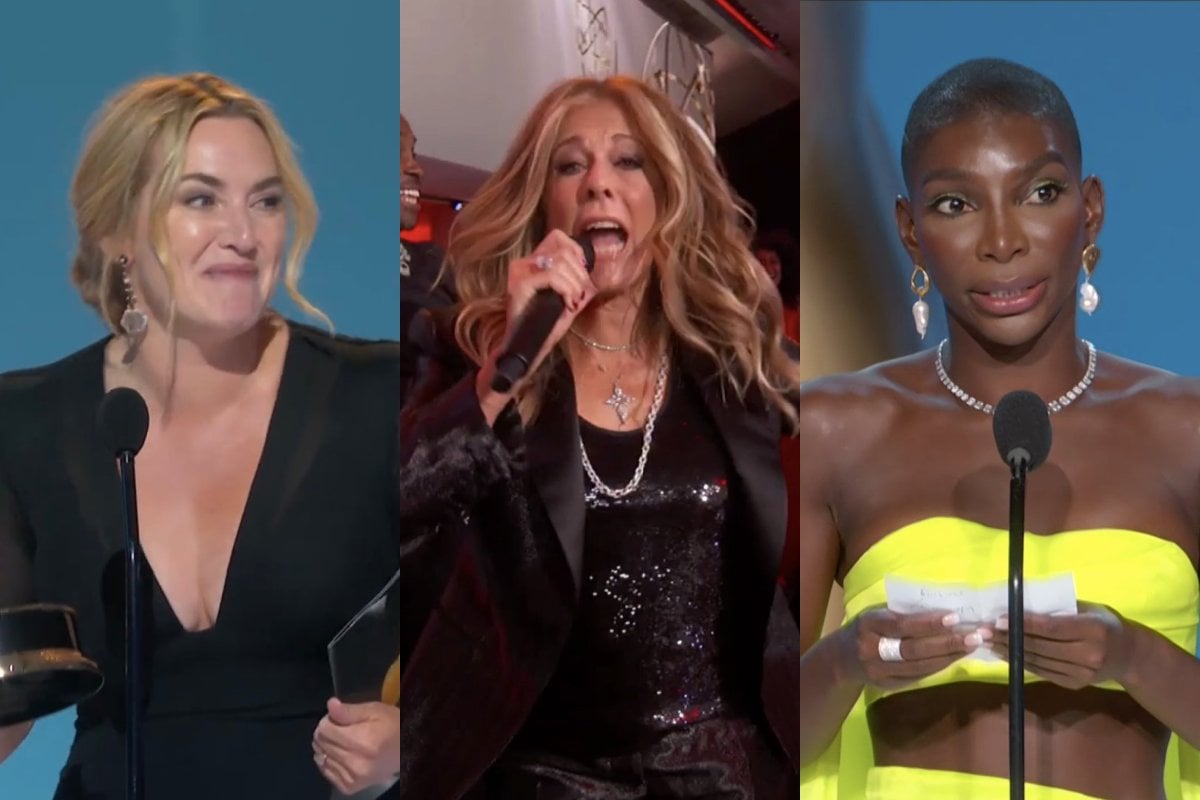 It's TV's biggest night and considering all our lives have consisted of recently is walks around our neighbourhoods and... television, this year's Emmys were extra special.

Expectations were high, because it was the first of Hollywood's major IRL award ceremonies after last year's many awkward, very boring Zoom versions. Plus, we were all excited to (hopefully) see our close personal friend Ted Lasso Jason Sudeikis win all the awards.

The night was exactly what we needed it to be. Even the cringe of the E! Live from the Red Carpet show was welcome a celebration of the entertainment that has helped us throughout a bloody rough time, and the shows that offered us escapism, laughs and metaphorical hugs when nothing else could.

Here are the biggest moments from the 2021 Emmys.

Jennifer Coolidge talking about her house ghosts on the red carpet.

On a fairly low-key red carpet, her interview with E! Live from the Red Carpet host Karamo Brown was as spectacular as we could've hoped, ranging from topics including the '5000 people' she had to show her negative COVID test to in order to get it, to Legally Blonde 3 to her... potentially haunted house.

Coolidge said she's never seen ghosts in her house but would like to, especially "an old sea captain" so they could swap stories at night.

We simply do not deserve her.

The show began with host Cedric the Entertainer and a dancing TV, which is definitely going to be my new sleep paralysis demon. 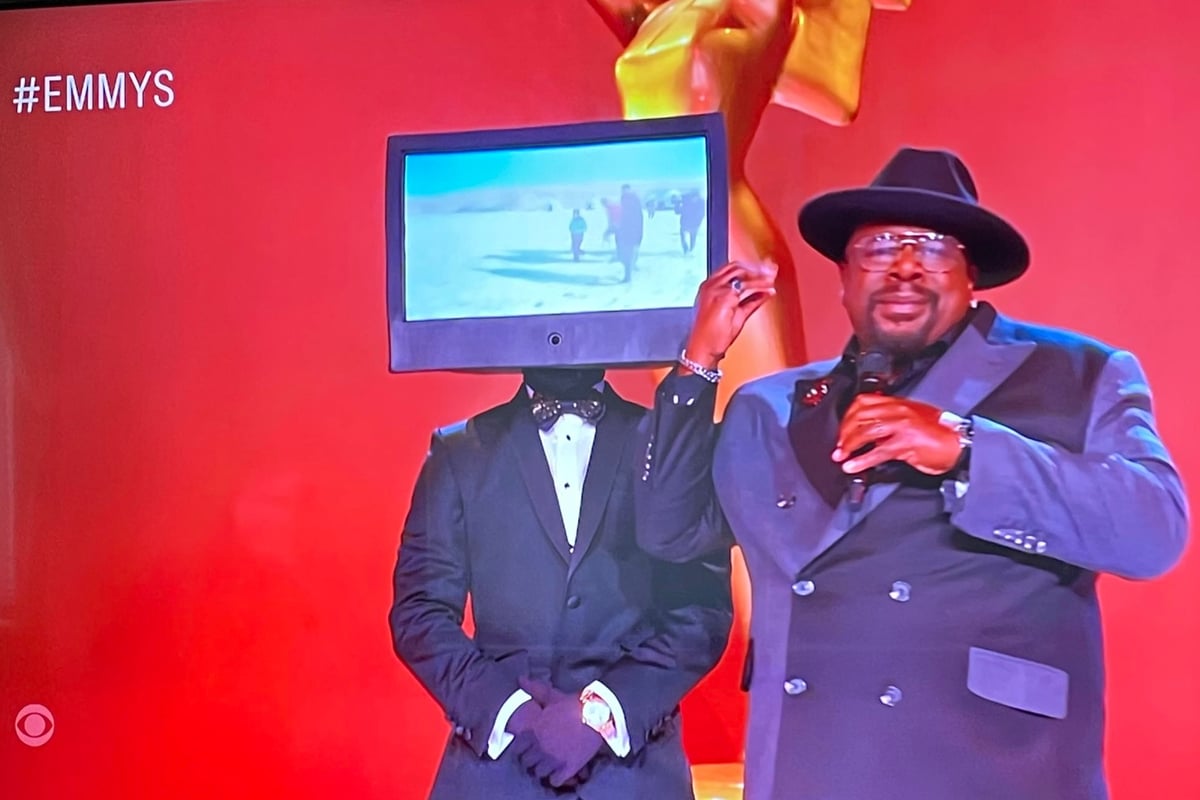 The musical number then had help from a bunch of stars, including LL Cool J, Mandy Moore and... a rapping Rita Wilson.

This one is for B-I-Z! 🌹 From Emmy Stages to 1520 Sedgwick Hip-Hop knows no bounds. Salute to Emmy host, @CedEntertainer and @LLCOOLJ for this heartwarming tribute to the Biz! #NobodyBeatsTheBiz 🤍🕊 #Emmys pic.twitter.com/BA5HtVuuy6

I am not drunk enough for Rita Wilson rapping over Just A Friend !!! pic.twitter.com/Li7c5KRHao

Unsurprisingly, because it had the most nominations of any show this year with 20, Apple TV's Ted Lasso a.k.a the most wholesome show on television was the biggest winner of the night.

Hannah Waddingham won Best Supporting Actress in a Comedy Series, proclaiming "Jesus Christ on a bike!" when she arrived on stage.

"Oh my god, I'm doing a speech at the Emmys!" she screamed, in definitely the most excited and epic reactions I've seen at an awards show.

"I was very specifically told I'm not allowed to swear, so this speech is going to be ****ing short," he laughed, before swearing... many more times.

Of course, OF COURSE, Jason Sudeikis won Best Lead Actor in a Comedy Series for... Ted... in Ted Lasso.

"This show is about family, mentors, teachers, teammates. I wouldn't be here without those things in my life," he said.

AND THEY THANKED ME, AND PROBABLY ALSO YOU, FOR WATCHING.

"The biggest thank you from the group is to the people who watch. We all know how lucky we are to do this for a living and we appreciate you," co-creator Bill Lawrence said.

YOU'RE SO VERY WELCOME.

Mare of Easttown, and the love for Kate Winslet.

And it is very clear everyone loves Kate Winslet as much as you'd expect.

Peters thanked viewers, the show's cast and crew, his family and... Winslet, for being Winslet.

Evan Peters yelling at Kate Winslet is literally the entire world every time she graces us with her presence. #Emmys pic.twitter.com/RetNMvAFPz

Winslet herself won Best Lead Actress in a Limited Series or Movie for her role as Mare.

She thanked her fellow nominees and praised women in the industry who "have each other's backs".

She also praised the show's creator Craig Zobel for creating "a middle-aged, flawed mother" and pointed out "all your actors have won stuff!"

She then thanked her husband and children, screaming "I AM THE WINNER!!!"

The Crown's clean sweep in the drama categories.

The Crown swept absolutely all the drama series categories, surprising absolutely... no one. It is the first series to ever do so.

Actual queen, and on-screen queen, Olivia Colman won Best Actress in a Drama Series and was typically humble about it all.

"I would have put money on that not happening," Colman said. She also tearfully honoured her father, who died during the pandemic, saying "he would have loved all of this."

So yeah, the Academy of Television Arts & Sciences loves themselves some royal drama!!!

The spectacular actress Jean Smart won Lead Actress in a Comedy Series for Hacks and she received a standing ovation, naturally.

She also gave one of the most emotional speeches of the night, giving special thanks to her late husband, Richard Gilliland, who died only six months ago.

"Before I say anything else, I have to acknowledge my late husband who passed away six months yesterday," Smart said.

"I would not be here without him, and without his kind of putting his career on the back burner so I could take advantage of all the wonderful opportunities that I have had."

Adam Driver being... called out.

Last Week Tonight with John Oliver won Best Writing for a Variety Series, and a group of its writers accepted the award.

"This isn't everyone who writes on the show," one of them said, referring to COVID capacity limits.

"So we just sent our hottest writers."

Then came one of the best lines in an Emmy speech... maybe ever?

"We would like to dedicate this award to Adam Driver. He knows what he did — and we know what we would like him to do," they said.

(But also, John Oliver's aggressive thirst over big strong man Adam Driver is a running joke on the series.)

The No Emmy support group.

BRB, we have to go to a "meeting." #Emmys pic.twitter.com/VAJ2rYvgo8

The group whined about their lack of awards, leading to (daytime) Emmy winner Dr Phil being brought in to share some advice.

And his advice was simple: get booked on Ted Lasso or The Crown. Duh.

Today, Debbie Allen became the first black woman to receive the Primetime Emmy Governors Award, presented to someone for outstanding achievement in television, for "her commitment to inspire and engage marginalised youth through dance, theatre arts and mentorship."

In her acceptance speech, which she was NOT going to hurry, Allen reflected on her long and award-winning career.

Allen has a total of 20 Emmy nominations under her belt, including five wins.

"Let this moment resonate with women across the world and across this country, from Texas to Afghanistan,” she said during her acceptance speech. “For young people, who have no vote, who can’t even get a vaccine—they’re inheriting the world that we live in and where we lead them. It’s time for you to claim your power. Play your voice, sing your song, tell your stories. It will make us a better place. Your turn."

The Queen's Gambit director and writer Scott Frank won Outstanding Directing for a Limited or Anthology Series or Movie, and also the award of the night's most persistent.

Frank kept talking for about two minutes, which is basically a full decade in award's show time, persisting through the orchestra's many, many musical cues for him to wrap it up.

At one point he responded, "Really?" to the tune and pressed on.

He ended his speech with a lovely tribute to star Anya Taylor-Joy, but the damage was done in the eyes of the internet.

My feed is one big united front against the AUDACITY right now. #emmys pic.twitter.com/r0SSOaJ5yb

Michaela Coel won her first Emmy for Best Writing for the groundbreaking series I May Destroy You.

"I dedicate this award to every single survivor of sexual assault." Michaela Coel #Emmys2021 pic.twitter.com/9VJzkWcFvy

"Write the tale that scares you," she urged writers, telling them to push their work to scary and uncomfortable places before dedicating the award to survivors of sexual assault.

(Also, later in the night when Olivia Coleman won she said "f*** yeah, Michaela Coel" and we simply have to agree.)

Given how the rest of the night went, most of us were expecting Mare of Easttown to take out the final award of the night for Best Outstanding Limited or Anthology Series, but Netflix's chess drama The Queen's Gambit was given the honour.

The rest of the night's awards were very, VERY predictable, so I honestly enjoyed the surprise here.

And just like that, the Emmys were over for another year and... heck.

If anyone's hoping to snag themselves an award next year, may I suggest perfecting your posh English accent or trying to get in contact with Jason Sudeikis?