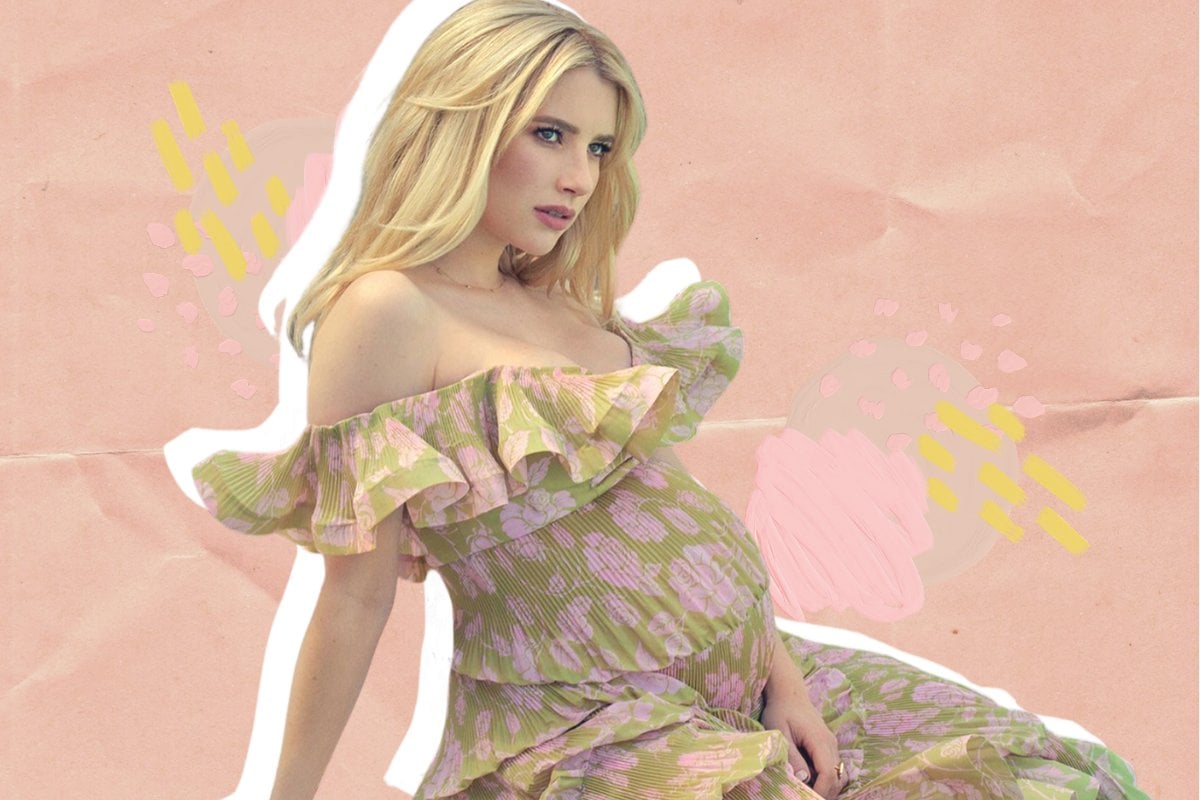 Emma Roberts, star of Holidate and Scream Queens, is pregnant.

But she never thought she would be able to have children.

“Ever since I was little, I wanted to have a baby, in theory. When I was a kid, I begged my mom to have another baby,” explains Emma in her interview with Cosmopolitan, which coincides with her stunning cover shoot with the magazine.

✨So excited to share this with you guys! Thank you @cosmopolitan for having me as your first pregnant cover 💖 words by the incredible @smdanler & photos by the ever talented @sashasamsonova ✨ link in bio 😁

Emma, like most young women, mentally penciled in her fantasy future - declaring to herself that by the time she was 24 years old, she would be married with kids.

However, as she edged towards her 30s (the actress is currently 29 years old), Emma hit a fertility roadblock.

“I learned that I’ve had undiagnosed endometriosis since I was a teenager,” she tells Cosmo.

“I always had debilitating cramps and periods, so bad that I would miss school and, later, have to cancel meetings. I mentioned this to my doctor, who didn’t look into it and sent me on my way because maybe I was being dramatic?”

This, unfortunately, is a lived experience for a lot of women. Endometriosis is famously tricky to diagnose and often disregarded by medical professionals (and sufferers themselves) as ‘bad period pain’. Women can go undiagnosed for the entirety of their lives, managing the severe pain whilst the disorder slowly chips away at their chance of naturally conceiving.

In Emma’s case, she had a funny feeling that the ruling of “being dramatic” from her doctor wasn’t quite good enough. So she took action.

“In my late 20s, I just had a feeling I needed to switch to a female doctor. It was the best decision. She ran tests, sent me to a specialist. Finally, there was validation that I wasn’t being dramatic.”

“But by then, it had affected my fertility. I was told, 'You should probably freeze your eggs or look into other options'.”

Though Emma initially pushed back and made the excuse, “I’m working right now. I don’t have time to freeze my eggs,” she admits that there was definitely more going on in her head in that moment.

“To be honest, I was also terrified. Just the thought of going through that and finding out, perhaps, that I wouldn’t be able to have kids….I did freeze my eggs eventually, which was a difficult process.”

Going through the rollercoaster that is managing the reality of your fertility, Emma explains that she started to blame herself.

“When I found out about my fertility, I was kind of stunned. It felt so permanent, and oddly, I felt like I had done something wrong. But I started opening up to other women, and all of a sudden, there was a new world of conversation about endometriosis, infertility, miscarriages, fear of having kids. I was so grateful to find out I was not alone in this. I hadn’t done anything ‘wrong’ after all.”

And luckily, Emma did eventually fall pregnant at a time that so many women do - the second they stopped thinking about it. The pressure was off, they were distracted and had more than the dominating sole thought of pregnancy circling around their brain on repeat.

“It sounds cheesy, but the moment that I stopped thinking about it, we got pregnant.”

Listen to Mamamia's Get Me Pregnant podcast, where they discuss putting your eggs on ice. Post continues after podcast.

Obviously, much like many women who have dealt with fertility roadblocks, Emma didn’t want to get her hopes up or tell the world her news - knowing full well it would probably make headlines in minutes.

“Things can go wrong when you’re pregnant. That’s something you don’t see on Instagram. So I kept it to myself, my family, and my partner, not wanting to make grand plans if it wasn’t going to work out. This pregnancy made me realise that the only plan you can have is that there is no plan.”

Something that Emma mentioned in an interview with Jimmy Kimmel, is that she didn’t even get to break the news in the end - her mother did that instead. And totally by accident.

"I was keeping my pregnancy pretty low-key, but unfortunately, my mother has Instagram. Which, mothers and Instagram, it's a bad combination," she told the late night TV host. "She definitely spilled the beans."

Thank you for having me last night @jimmykimmel 💕 we talked moms on Instagram and my new movie #holidate on @netflix October 28th! 👻

Her mother was thanking fans in the comments section of Instagram posts for their well wishes about Emma’s pregnancy (which was just tabloid speculation at the time).

"She was like, 'Thank you so much for the well-wishes! We're so excited,'" Roberts continued. "It was endless. My friends were sending me screen grabs. It was unbelievable. When I said to her, 'Mum, you revealed my pregnancy.' She goes, 'Emma, you announced it!' And I said, 'No I didn't. That was a tabloid.' She goes, 'Oh I didn't… That wasn’t clear.'"

But now the news is out in the open, and Emma’s bump has graced the cover of Cosmopolitan magazine, we hope she can delight in all that’s to come in her new life with her baby boy.