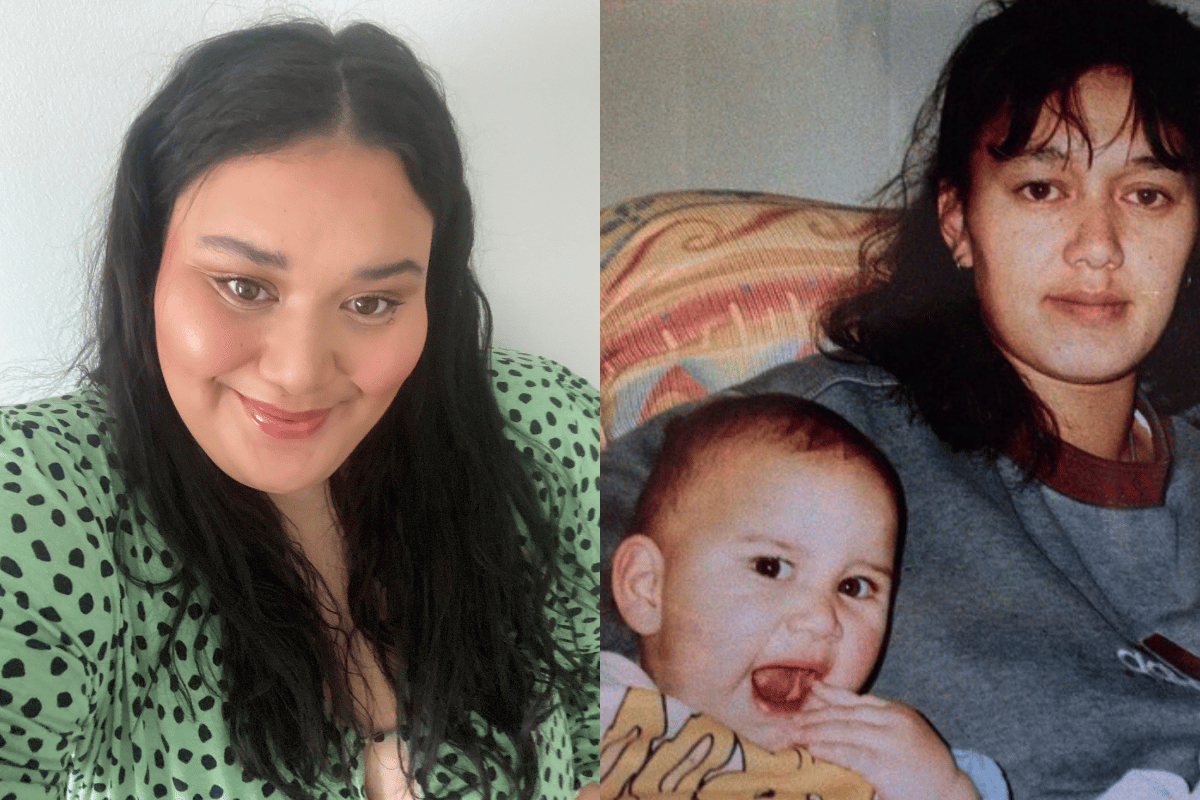 I am calling my mother out.

Yes, the woman who carried me for 34 weeks, fed me with her own milk, raised me and loved me and blah blah blah.

I'm not here to write in complete reverence and awe of her, but to make it clear that I have lived through some pretty shameful moments... all because of my very lovely mum.

In all honesty, I don't really have maternal instincts (ahem: you can read all about that here), nor do I think I could ever do the job my mum has done - for the most part, flawlessly - for 23 years.

And quite frankly, not many people can. So, I honour her for that.

But my god, there are certainly some things I would absolutely love to do over, especially when it comes to a heap of childhood experiences that concern my mother.

The culprit and I with my baby sister (not sure which one and she's irrelevant to the story so..) Image: Supplied.

She lives overseas now, and it would take her a hell of a long time to get to me just to clip my ear; so I’m taking my chances here by sharing some of the many (many) moments where my mother has embarrassed the living heck out of me.

I've blocked a lot of my childhood out (solely for my sanity), but there's still a lot to be said for what I can (unfortunately) remember, so I thought what better time to share than the present.

1. She made me take part in an 2km cross country race. I came last.

Let me set the scene.

It’s the first grade and I am at my first ever athletics carnival. I am a chubby kid, with a penchant for being chauffeured on push bikes by my sisters instead of actually riding them myself.

I’m mum’s oldest of four daughters, so naturally she forces me to be brave and do everything first.

And because mum cannot stand the fact I have refused to involve myself in any of the day's activities - aside from recess and lunch - she makes me take part in the last race of the day: the two kilometre cross-country run.

I beg her not to make me do it. I promise to do all the dishes, to hang out all the laundry. I promise to be a perfect daughter. But she certainly isn't buying any of it because a few minutes later, I'm doing stretches to prepare for this bulls**t.

Everyone is really proud of me. My friends say we can run alongside each other. But when push comes to shove, I am the last person out of the other 100 kids to finish.

It’s a humbling experience and one, that in all honesty, completely sobers me up when I am stumbling home from a night out.

But you know what takes the cake? I’m literally seconds away from throwing the world’s biggest tantrum, and then all of a sudden, there is my mum, in her Kathmandu puffer jacket, without even a hint of sweat glistening on her forehead, cooly running alongside me.

She's come to join me, push me, motivate me. Whatever you want to call it. It doesn't matter because I am officially dying inside.

Everyone is cheering when I finally make it to the end, but I am red-faced and mortified. Later on, my crush will tell me he saw me running out on the field, and before I can respond to ask if he liked my terrible incredible performance, he will walk away.

That says it all, tbh.

2. She once scolded me in front of my crush. He was 10 years older than me, but still.

I had the world’s biggest crush on a fully grown 19-year-old when I was just a 10-year-old with mismatched socks and an endlessly runny nose.

Truly, I believed we would end up together - once I finally managed to outgrow my netball sneakers and khaki pants phase, that is. Well, I did believe that… until my mum had to go and ruin everything.

Right in front of him, she showed just how much of a kid I was by telling me to put some veggies on my dinner plate. My future husband and mother giggled in that haughty way adults do when they've said something utterly hilarious at the expense of a child (I inherited that laugh too on my 18th birthday).

Then and there, my illusion of a perfect life with my kinda-sorta-cousin-but-not-really-at-all was shattered. It broke my tiny, little heart.

If you’re reading this mum, just know you spoiled something that could have been really great for me.

3. She told me to smile “with my teeth” for my passport photo.

This is only embarrassing because she thought it would be funny if I bared all my shiny white teeth for the man at the post office (I had no idea your mouth had to be closed for a passport photo. Because I was a CHILD??).

I do my best smize, with a slightly raised eyebrow, thinking it will be any second now before I get scouted to model at this local Stockland.

But then the camera man yells at me, because I look like a bloody idiot. And teeth aren't allowed. Because of biometric security or something.

My mum did in fact find it very funny.

What resulted was a photo of me trying not to smile, and thus the most mortifying photo to ever exist - like ever - was born.

4. When I was in the 10th grade, she yelled at my friends for not looking at the camera.

Yeah. That's basically the whole story. We were getting ready for a party, and mum insisted on a group picture with all my “girlfriends” (which was not the cool way to refer to your besties when you’re a 15-year-old in 2014, by the way).

While they chattered away, I stood nervously anticipating what was to come.

Then this woman slowly and calmly lowers her phone before shouting: “Girls! Pay attention! I don’t have all day!”

Those “girlfriends” are still some of my closest friends, and despite my objections, they are absolutely convinced mum still hates them seven years later.

5. She made me birthday invitations in the form of a lanyard.

But put yourself in my shoes for one second. Imagine being just on the precipice of 16-years-old, and you're a teenage girl who is desperate to be just like everyone else.

Then comes along your lovely mum, with lofty ideas of what a 16th birthday should look like.

All I wanted was to partake in some slightly questionable activities and have a random top 100 playlist blare from a crappy speaker. My mum had different ideas though and decided I wouldn't be making an easy and free event on Facebook, but would instead hand out birthday invitations in the form of lanyards with my face on them.

I was instructed to give them out to the entirety of my 10th grade class, and because my mum didn't scare me (as much) anymore, I decided that I would hide all 67 in the bottom of my schoolbag and chuck 'em out somewhere on my way home.

However, one slipped out of my bag and into the hands of a friend, who showed my whole grade. It turned out to be more amusing than humiliating to everyone (thank GOD, or else I would have probably transferred schools).

I had actually forgotten all about this... situation... until a picture of the forbidden lanyard was texted to me the other day. 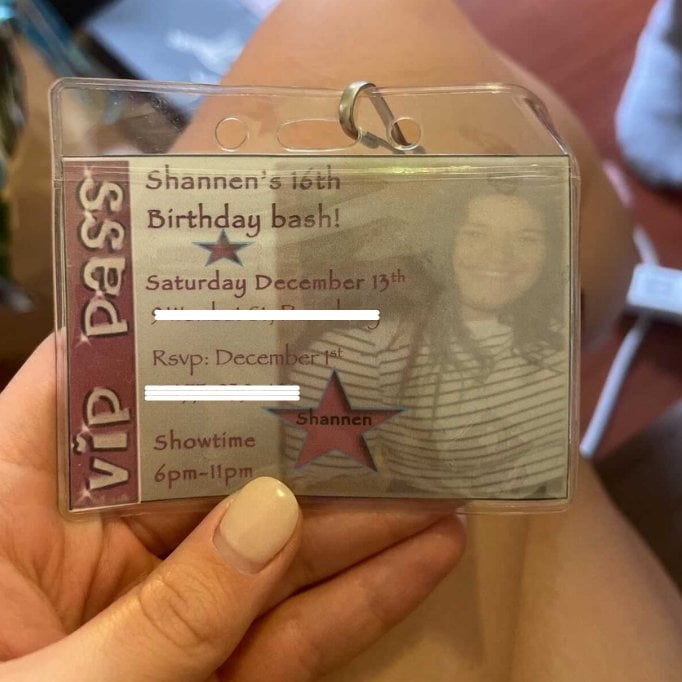 To make it worse, she stretched my (already) chubby face to make it fit on the invite. Image: Supplied.

6. She posted (multiple) videos of me singing on Facebook.

I will not be sharing the clips, but just know she used to sneakily record me while I was learning to play the piano and sing at the same time (it's harder than it looks).

Then, she would not only post it on Facebook but tag ME so it showed up on all of MY friend's newsfeeds.

My croaky rendition of 'Say Something' was definitely... shameful when I found it on Facebook a day later with 23 likes and seven comments.

There's about seven videos of me I'm yet to delete, and she shares them every year to brag about her "musical baby". Ugh.

7. She posts the bad selfies I take on her phone from six years ago. To this day.

If it's not clear, I do love my mum. She's a glorious human. But there a few days a year where I absolutely loathe her. And it's when she shares Facebook photos that show me as an ugly child.

It's not like they're just unattractive, or awkward, or ugly. It's the fact they're all of these things, and more. Pimply forehead, bangs that look like they were cut with a garden hose and outfits no one should ever wear.

Either way, I really don't appreciate the reminder that I wasn't a cool girl. It's just not very swag money of you, mum.

Not very swag money at all.