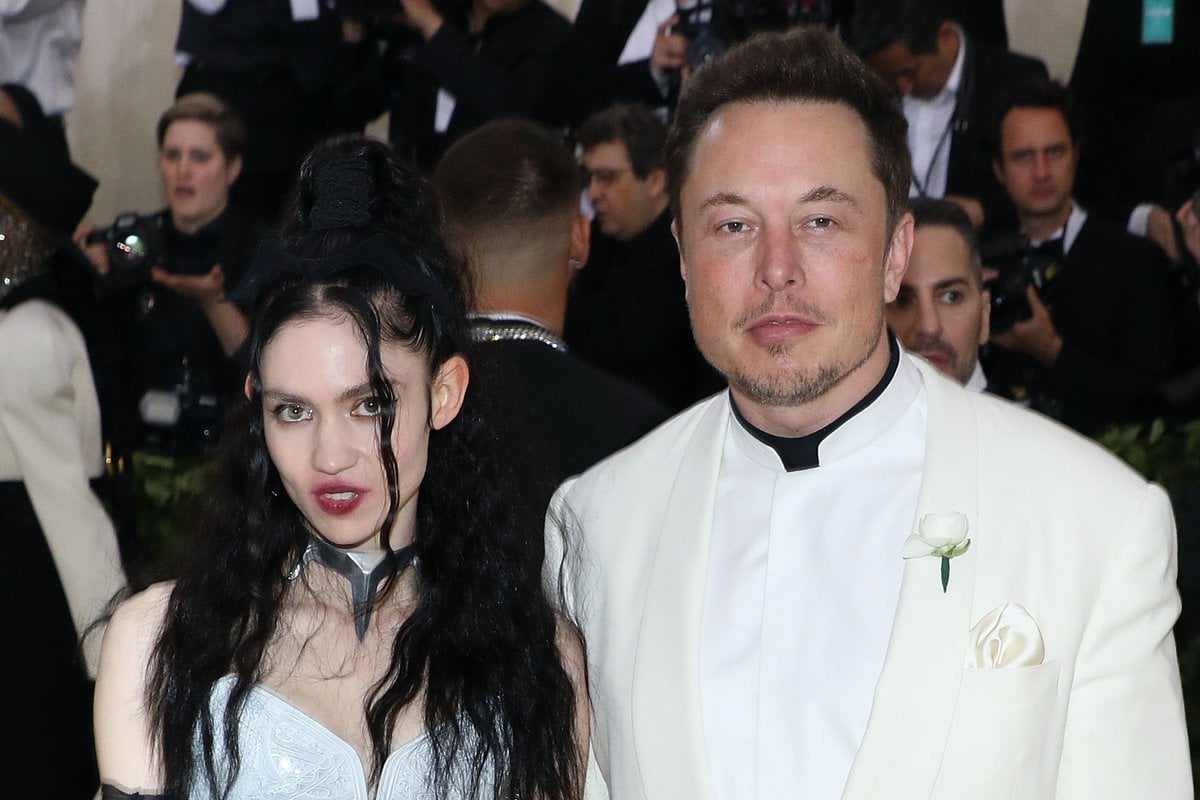 Elon Musk is one of the richest people in the world.

The 50-year-old SpaceX founder and Tesla magnate has joined the likes of Amazon's Jeff Bezos and Microsoft's Bill Gates to become one of only five 'centibillionaires' – someone with a personal fortune exceeding $100 billion – in the world.

But it hasn't always been smooth sailing for the controversial figure.

When Maye and Errol later divorced in 1980, Musk opted to move in with his father, who seemed "lonely". But soon afterwards, he realised it was "not a good idea".

"He was such a terrible human being. You have no idea," Musk told Rolling Stone.

In recent years, Musk has refrained from speaking about his estranged father. (Errol Musk famously made headlines in 2018 after he welcomed a baby with his stepdaughter, who is 40 years his junior.)

But in Ashlee Vance’s 2015 biography, Elon Musk: Tesla, SpaceX, and the Quest for a Fantastic Future, Musk described his childhood as "like misery".

"[My father] is good at making life miserable – that’s for sure. He’s not a happy man," he said. "I don’t know how someone becomes like he is. It would just cause too much trouble to tell you any more."

Outside of family dramas, Musk had a tough time at school. 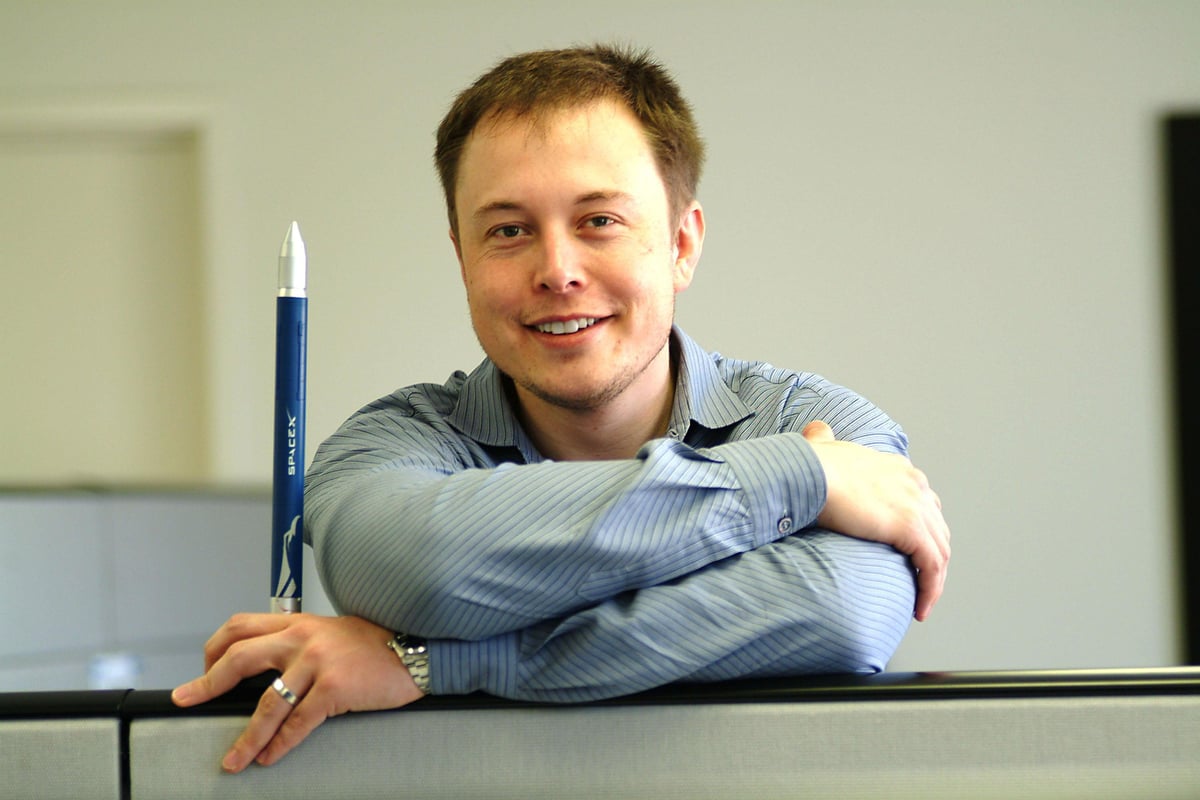 Throughout his childhood, he was severely bullied, and even hospitalised following one incident when a group of boys threw him down a flight of stairs.

"Kids gave Elon a very hard time, and it had a huge impact on his life. In South Africa, if you're getting bullied, you still have to go to school. You just have to get up in the morning and go. He hated it so much."

But while school was challenging, Musk found an escape in the form of computers as well as his growing desire to move to the United States, which he saw as the land of endless opportunity.

After graduating high school, Musk moved to Canada to study at Queen's University in Kingston, Ontario, before transferring to the University of Pennsylvania, where he later graduated with degrees in economics and physics.

Although Musk was later accepted to a PhD program at Stanford University in California, Musk dropped out of Stanford after just two days, opting to dip his toe into the world of Silicon Valley.

Partnered with his brother Kimbal, Musk founded a software company, Zip2, which provided online city guide software to newspaper publishers. However, at the time, the brothers could not afford an apartment in California. Instead, they slept on the office couch, and showered at a nearby YMCA.

"The website was up during the day and I was coding it at night, seven days a week, all the time," Musk shared in a speech in 2014.

"I briefly had a girlfriend in that period and in order to be with me she’d have to sleep in the office."

But eventually, it paid off. Four years after the company was founded, Compaq acquired Zip2 for $307 million, with Musk receiving $22 million for his share in the company.

Since the launch of Zip2 in 1995, Musk's career – and net worth – has grown astronomically.

In 1999, he co-founded online bank X.com, which later merged with Confinity to form PayPal, before being bought by eBay for $1.5 billion.

But by 2008, Musk was almost broke. Amid the global financial crisis and struggles within both SpaceX and Tesla, Musk was living off personal loans.

"I remember waking up the Sunday before Christmas in 2008 and thinking to myself, 'Man, I never thought I was someone who could ever be capable of a nervous breakdown. I felt this is the closest I've ever come. Because it seemed pretty, pretty dark." 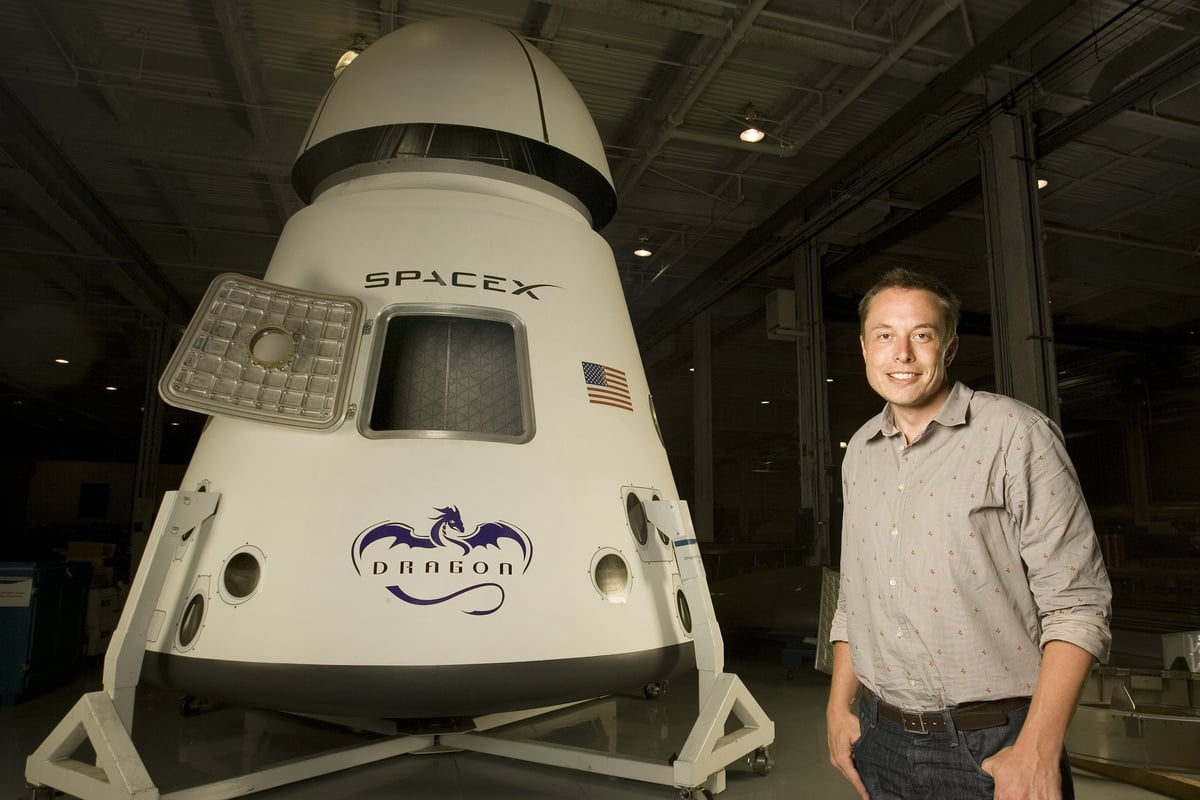 At that same time, Musk's personal life was in shambles.

In 2008, Musk divorced his wife of eight years, Canadian author Justine Wilson. During their marriage, the couple had twin boys and triplet boys together. Their first son, Nevada, died of sudden infant death syndrome (SIDS) at 10 weeks old.

In an infamous piece for Marie Claire, Wilson wrote: "One month and three [counselling] sessions later, he gave me an ultimatum: 'Either we fix this marriage today or I will ­divorce you tomorrow.' He filed for divorce the next morning."

She added: "Six weeks [after Musk filed for divorce], he texted me to say he was engaged to a gorgeous British actress in her early 20s who had moved to Los Angeles to be with him."

Speaking to the Evening Standard, Riley shared that she met Musk at a London nightclub.

"He showed me all these pictures on his phone: 'This is my rocket, this is my electric car.' I did think he was a little bit insane," she said. 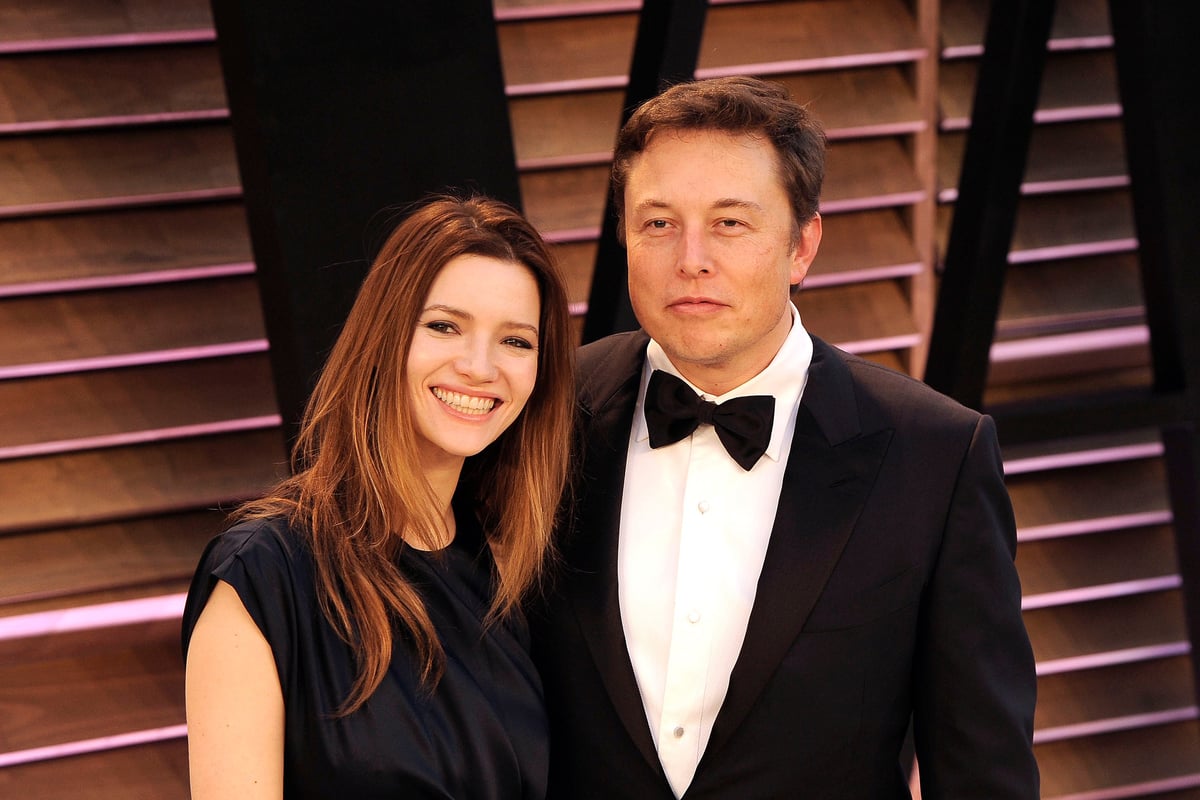 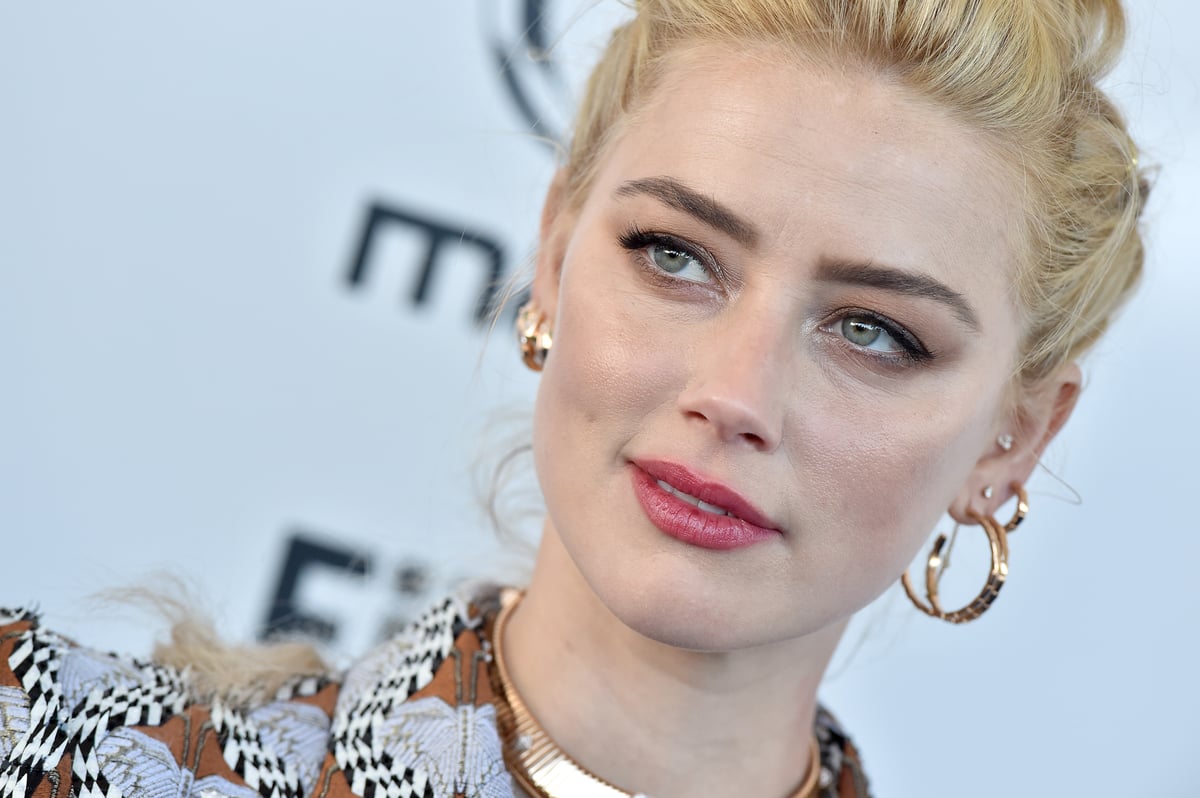 Amid the couple's second divorce, Musk was linked to actress Amber Heard, who he had reportedly been pursuing since 2012. However, their relationship didn't last long.

"I was really in love, and it hurt bad," Musk later told Rolling Stone, reflecting on his split from Heard.

As for his career, things started slowly looking up for Musk after SpaceX landed a $1.5 billion contract with NASA, while Tesla continued to grow. In fact, Musk's rapid career growth served as inspiration for Robert Downey Jr's portrayal of Tony Stark in Marvel's Iron Man.

In the years that followed, Musk founded several new companies, including OpenAI, Neuralink, and The Boring Company.

But since Musk's business portfolio and social media presence have grown, he has faced his fair share of controversies.

Then, in 2018, Musk was criticised after he referred to British diver Vernon Unsworth as a "pedo guy" following his involvement in the Tham Lung cave rescue of a children's soccer team in Thailand. Although Unsworth filed a defamation lawsuit against Musk, the SpaceX founder was found not guilty of defaming the diver.

The 50-year-old also recently made news for buying Twitter Inc for $44 billion cash (AUD$61 billion) in a transaction that will give him control of the social media platform.

The transaction was approved by the board and is now subject to a shareholder vote.

In 2019, Grimes announced her pregnancy, confirming that Musk was the father.

Their son, who was born in May 2020, was named "X Æ A-12". But after the name was deemed illegal under California law, his name was eventually changed to "X AE A-XII". The couple often refer to their son as "X". 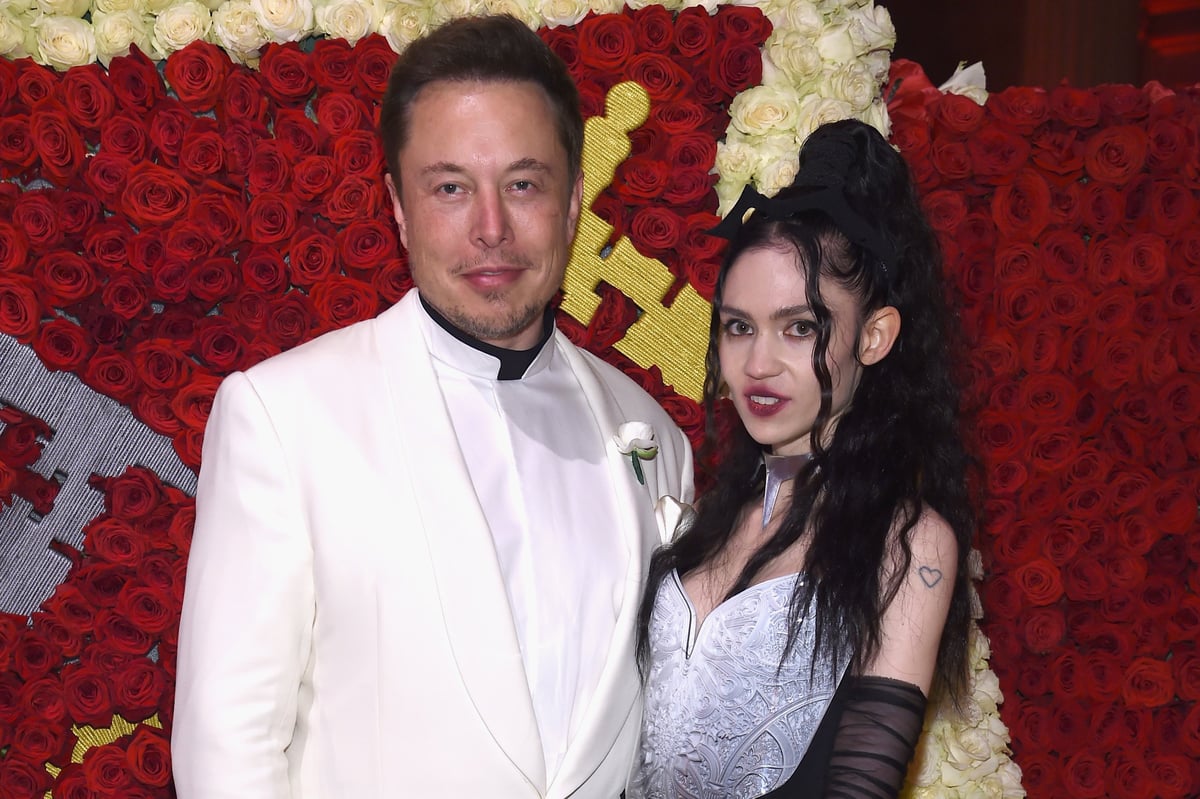 In September 2021, Musk told Page Six that he and Grimes are 'semi-separated', but continue to co-parent together.

"We are semi-separated but still love each other, see each other frequently and are on great terms," he said.

"It's mostly that my work at SpaceX and Tesla requires me to be primarily in Texas or travelling overseas and her work is primarily in LA.

"She's staying with me now and Baby X is in the adjacent room."

In a recent interview with Vanity Fair, Grimes shared that she and Musk welcomed a second child in December 2021.

Grimes had previously shared that Baby X was with his father.

The musician shared that after a "scary" pregnancy with their first child, the couple feared serious complications. So, they welcomed their second child, a daughter, secretly via surrogate.

She goes by the nickname "Y".

"Exa is a reference to the super-computing term exaFLOPS (the ability to perform one quintillion floating-point operations per second). Dark, meanwhile, is the unknown. People fear it but truly it's the absence of photons. Dark matter is the beautiful mystery of our universe."

Grimes explained Sideræl is pronounced "sigh-deer-ee-el", and it's "the true time of the universe, star time, deep space time, not our relative earth time".

It's also a nod to her favorite Lord of the Rings character, Galadriel, who "chooses to abdicate the ring".

As for her relationship with Musk in 2022, the musician said they're "happy".

"There’s no real word for it," Grimes said.

"I would probably refer to him as my boyfriend, but we’re very fluid. We live in separate houses. We’re best friends. We see each other all the time... we just have our own thing going on, and I don’t expect other people to understand it."

They both want more children, too: "We’ve always wanted at least three or four."

This post was originally published on May 11, 2021, and has been updated with new information.

Reply
Upvote
I am so tired of billionaires. Can they lose all their money now, please?
A
amymonty 8 months ago