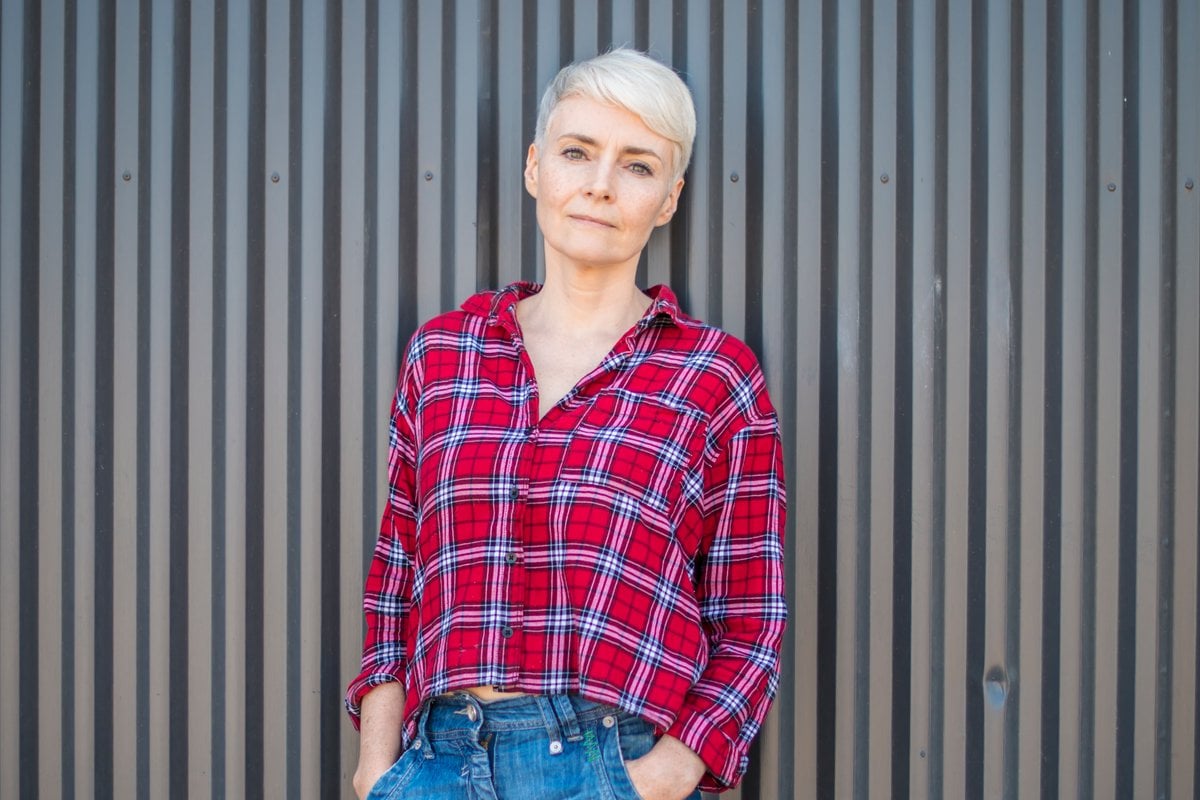 Stalker, noun. A person who follows and watches another person over a long period of time in a way that is annoying or frightening.

Ellis Gunn calls him The Man.

The Man sitting in his car outside her home.

The Man at her young son's school.

She knows his real name, of course. So too do the police.

But this story isn't about the Man. It's about Ellis Gunn, a Scottish-born poet who lives in Adelaide with her husband and children.

Today, her memoir Rattled is being released, and alongside the usual nerves a writer feels when they let loose a body of work into the wild, there is another emotion Gunn is feeling: fear.

Listen to The Quicky's episode on coercive control. Post continues below.

"It's quite nerve-wracking. My concerns around potentially the stalker finding out... I mean, he hasn't been around for years. And I don't imagine he's interested in me anymore," Gunn tells Mamamia. Her voice is warm and quiet over the phone; her Scottish lilt pleasant.

"But it's just the idea that he might google my name out of the blue and realise that I've written about the experience. And then if he reads the book, he's definitely going to be angry about that, I would say. Because he's a stranger, I have no idea what he's capable of.

"I don't know how his mind works and what extremes he's potentially willing to go to, to get some kind of revenge for me telling the story."

The story - Gunn's story - is both an easy read and a difficult one. You'll likely devour the pages of Rattled in a night... and have to leave the light on afterwards.

The memoir recounts her innocuous - and chilling - meeting with the Man at an auction house and how quickly that first encounter escalated into stalking. How she went to the police. How, while sympathetic and understanding, they couldn't really do anything because nothing had actually been "done" to her. How she was frozen with fear and crippled by panic attacks.

Gunn also weaves in other traumas in her life, including domestic violence and sexual assault, into the memoir. The language is beautiful, even though what she is describing is not.

"When I first started writing [the book], that wasn't what I intended to write. I was going to write a book about homesickness and immigrating to Australia from Scotland," she admits.

"I was thinking about all the things that had happened to me since coming here, and I thought about the stalker, and I started writing about that. And then the story kind of poured out of me almost like it was writing itself.

"Similarly, with the other sexual harassment stories, I hadn't planned to write about all that. It seemed to release this memory of all these different things that happened. And it was almost as if it was a story that wanted to be told, and I couldn't really stop it from coming out."

Yet while there was some catharsis, there was also re-traumatisation. Researching the minds of stalkers and the different types of stalkers and what they're capable of made her question why she was writing the book. "I thought, What is the point of this? Why would anybody be interested in it?

"Then I had to answer [myself]: 'I can't help not telling it. It feels like a story that needs to be told'. The thing that kept coming up in my research was there's so many people that don't take stalking very seriously as a crime.

"And it seemed to me like it was really important to help other people to understand. Because obviously, most people that are stalked, they're not going to want to put that story out there and tell that story in public because they're afraid of the repercussions of that.

"It was really important to help people understand how terrifying [stalking] is even when there's not necessarily a physical threat or physical violence or anything like that. I mean, my stalking experience was quite mild compared to lots of people and yet it completely threw me. It just turned my whole world upside down...

"It made me look at the world in a different way. I just had that kind of hypervigilance, and that stress level going for a long time afterwards. It's no way to live really." 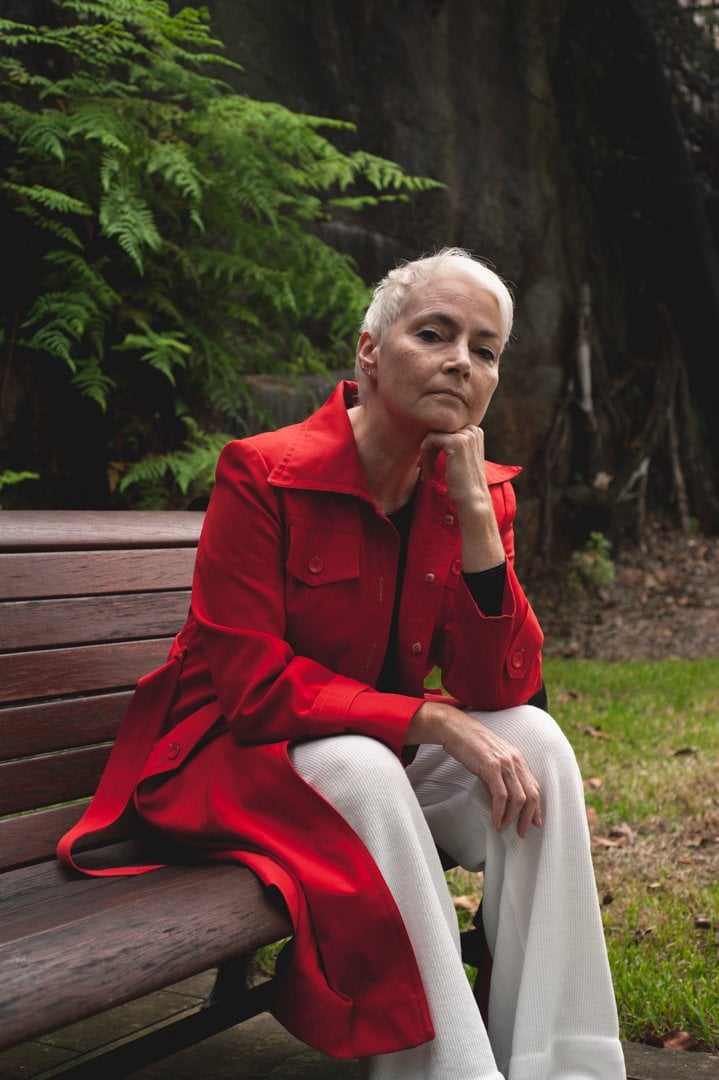 For a time, Gunn internalised the blame. Why had she been so friendly when she met the Man? Why was she so open about her life? Why did she tell him so much? Why was she so chatty?

It was only in the process of writing the book that she began to understand none of it was her fault.

"I started thinking, 'Well, I've been taught to be polite and to respond to people in a polite and friendly way if they make conversation with me and not to say anything that might cause offence... even when a complete stranger starts to ask me weird questions," Gunn says.

"That is something I've had to address and sort of say, well, I don't have to give people answers to anything that I'm uncomfortable with. But it still is quite difficult to get over that because of course, there are years of training behind me that tells me that is what I shouldn't be doing.

"And there's the fact that I'm fairly open and friendly, which has also been a good thing in lots of ways. I have a lot of supportive friends around me - and that's because I'm friendly and open.

Even now, years after the stalking has stopped, the Man lingers on the mind. He doesn't loom as large as he used to, thankfully, but like any trauma, he remains.

Case in point, Gunn was speaking with a tradesman the other day and some of the questions he asked made her feel uncomfortable. "I felt, that's really weird, why is he asking that, that's quite similar to something the stalker asked and that sort of thing," she tells Mamamia.

"Then my mind goes off in this spiral of 'what if he's like that' and 'I've told him this and that'... like any kind of trauma, there are things that can trigger it. And although it gets easier over time - I'm certainly not, in general, walking around looking over my shoulder all the time, which is what I was doing when I was being stalked - but there are little things that can make me feel anxious again."

Even watching certain TV programs can be stressful. Recently, Gunn - who likes to keep up to date on what is happening in the stalking space - was watching British TV presenter Stacey Dooley's program, Stopping Stalkers, which features women telling their own stories about what has happened to them.

"I can't watch more than half an episode at a time," Gunn reveals. "I watched a full episode a few days ago and when I clicked stop, I was aware of my shoulders slowly sinking down... I hadn't realised my shoulders were right up around my ears while I was watching it because I was so tensed up."

While there are changes happening in Britain regarding the laws around stalking, Gunn says the changes in Australia are on a much subtler level.

"It's difficult for most people to want to come out publicly with [stalking] because of the possible repercussions of it," she says.

"I think there's more public awareness of what women have to put up with in general. A lot of men that I've spoken to have said that they feel they've been walking around in this little bubble completely unaware of the things that women have to deal with.

"It's not only the big things, but the little things as well. The constant putdowns and the undermining, being talked over, being mansplained to, and all of those microaggressions."

After noticing she was being stalked, Gunn went straight to the police. Even though they were very understanding and sympathetic to her situation, the police were ultimately unable to help because of the limitations placed on the system.

"It's just the way the criminal justice system works," she says. "The system is set up to punish a crime that's already happened. And of course, you can't punish somebody for something that they haven't done yet.

"So if stalking in itself isn't a crime, then there's nothing you can do until they do something, like threaten somebody or break into their house.

"And you have to have so much proof as well. The way the law stands in Australia at the moment - although this has changed in Scotland - is that you have to prove the person stalking you intended to cause you harassment and stress. And of course, that's a really difficult thing to prove... stalkers are careful about the evidence they leave behind."

As Gunn notes, even if a stalker is convicted, the sentence they receive is light. "The maximum sentence, unless they've done something threatening or violent or broken into your house, is only a couple of years and quite often that will then get reduced to less than a year because of good behaviour," she says.

"And they will almost immediately offend again because they're coming out of prison angry they've been put in there."

That's why she believes it is important for there to be rehabilitation programs in prison. Additionally, there needs to be education in schools about why this kind of behaviour is not romantic. 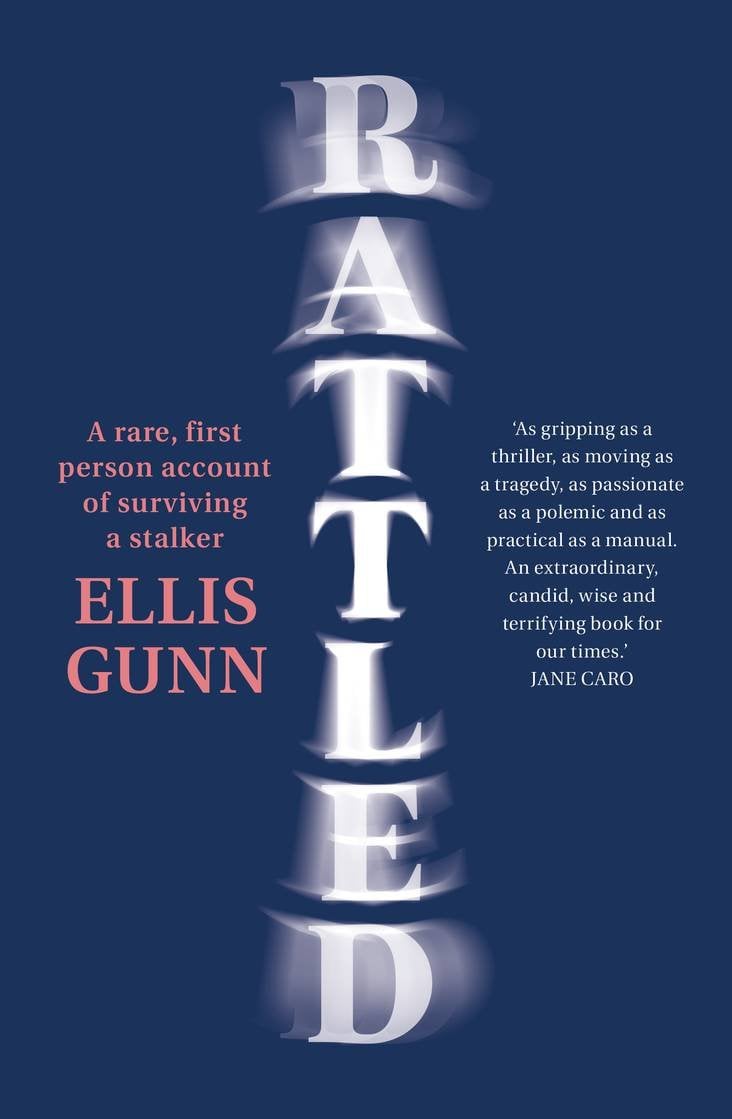 In her book, Gunn describes the moment she told the Man very implicitly to leave her alone and how the stalking stopped.

While time has been healing for her, so too has counselling and CBT (Cognitive Behavioural Therapy).

"It was helpful, especially earlier on, to be able to go through some of those CBT exercises. If my brain was spiralling off into those places of anxiety, I could start to pull back and tell myself that it's OK, you haven't seen him for a while, there is a good chance that he has stopped, and that sort of thing," Gunn says.

"If I started to think that somebody else was following me or was behaving a bit weird, I'd just look around a bit more carefully and think, 'Are there other possible reasons for the way they're behaving?' What are the chances of the stalking starting up again? Being able to talk myself down a little bit when I found that I was just getting anxious about those kinds of things again.

"[What's really helped] is being able to talk to people and have them listen sympathetically to my story. That's hugely important. I think part of the problem for women has always been we haven't been able to talk through what's been happening because of this silencing business. This idea that you're just somebody who's making a fuss about nothing or just complaining.

"There's something about women being called Karens and it's just like another way of telling women you're not allowed to complain. You've just got to keep your mouth shut.

Rattled by Ellis Gunn is published by Allen & Unwin today (May 3) and available in all good bookstores.

If you are experiencing stalking or harassment, contact your local police. Support is available via 1800 RESPECT. Please call 1800 737 732 to speak to a trained counsellor.