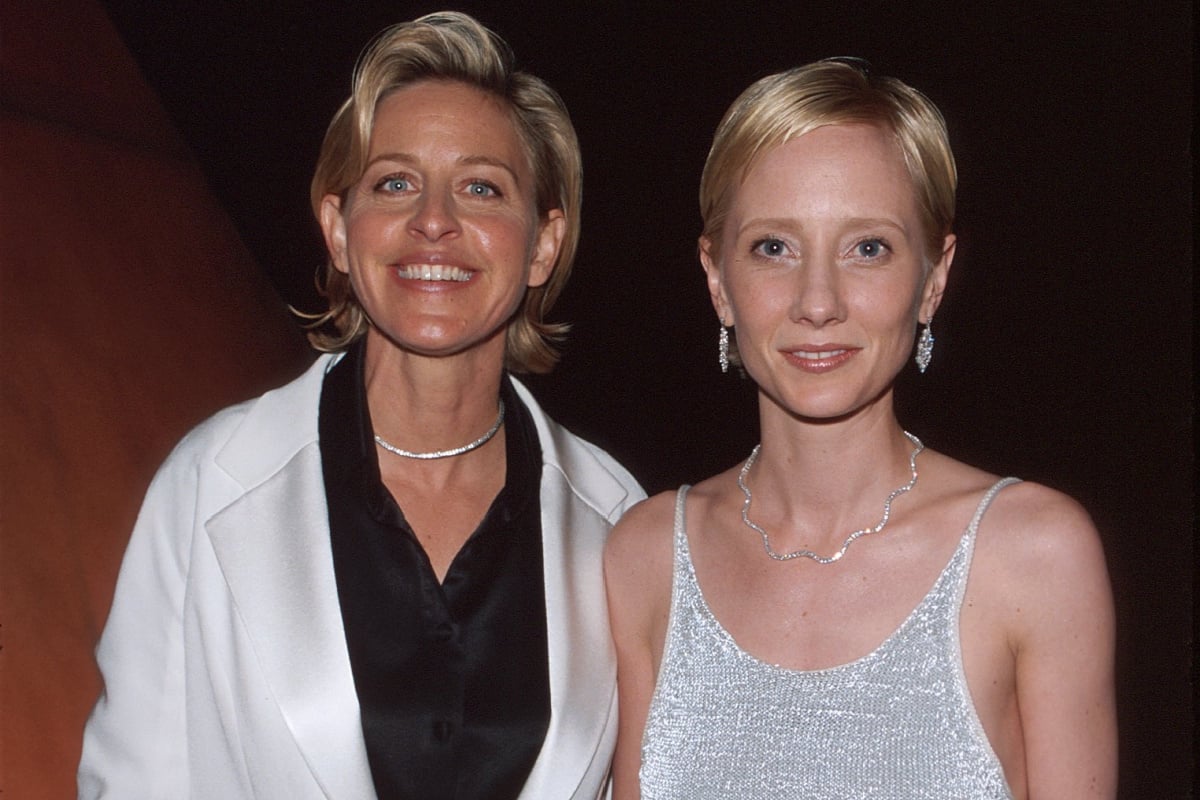 Content Warning: This post contains mentions of sexual assault and mental health issues, and may be triggering to some readers.

When Ellen DeGeneres came out to the world as gay, her new girlfriend Anne Heche was by her side. For three years, they were the most famous same-sex couple in the world. Then they split, and the same day, Heche suffered a psychotic breakdown.

Heche was battling mental health issues long before she met DeGeneres. She has said she was sexually abused by her father from the time she was a toddler, and that abuse triggered her mental illness.

Heche’s father Donald, a Baptist choir director, died from AIDS when Heche was 13. She only found out he was gay just before he died. Just a few months later, Heche also lost her brother Nate when he crashed his car into a tree.

While still in her teens, Heche scored a role in daytime soap Another World, playing evil twins. She won a Daytime Emmy and starred in acclaimed movies including Donnie Brasco. She dated actor Steve Martin, 30 years her senior, and Fleetwood Mac’s Lindsay Buckingham, who wrote a song about her.

At the same time, she was also experiencing "moments of madness".

"You name it, I could do it," she said. "I could see into the future. I could heal people. I don't know where it came from. I was, in my mind, learning it from God."

Video via The Oprah Winfrey Show.

Then Ellen DeGeneres came into her life.

DeGeneres had already seen Heche in Walking And Talking and thought she was "amazing".

"And then I met her at the Vanity Fair party," she later recalled. "And it was a chemistry thing that you can't really describe. It just happened. Obviously I was attracted to her, but that wasn't enough. There are a lot of attractive people. She is so unique."

Heche told Oprah Winfrey she saw DeGeneres across a crowded room and was "just drawn to her".

"Our souls connect[ed], and there's a time when souls come together and they're just meant to be... My soul was meant to be with hers and that's all that matters."

Heche later explained to Walters that to her, DeGeneres represented everything her father never was.

"She was free. She owned her sexuality. I had connected everything with my father and my abuse to the fact that he was not allowed to be the homosexual that he was."

That night, the two of them slept together. It was Heche’s first sexual experience with a woman.

"Up until that point, that was the best sex I'd ever had," Heche says. "I felt cared for... I felt free to express a part of me that I had not been able to express with a man. I felt sensuous and sexual in a way I hadn't before."

From that night on, DeGeneres and Heche were together, very publicly – appearing on Winfrey’s talk show together, and walking the red carpet at the Volcano premiere holding hands. 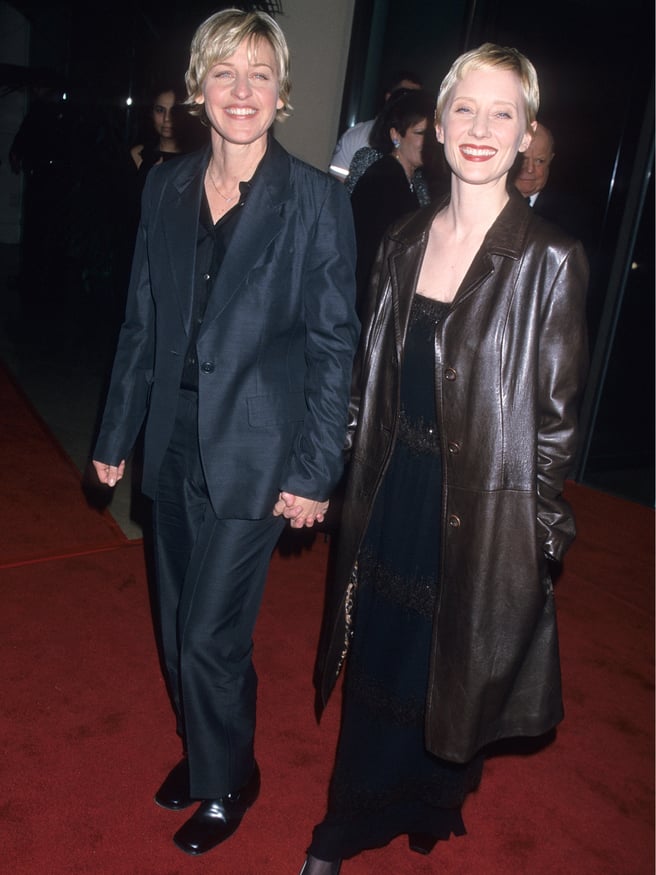 "I didn’t want to hold hands," DeGeneres told the Los Angeles Times in 2001. "I had never done that in public. And yet there was this attitude of, you know, 'You’re going to be on the cover of Time magazine and say you’re gay but you’re not going to hold hands? You deserve to hold hands as much as Tom and Nicole. Or Tom and Rita.'"

Heche, who is currently appearing on Dancing with the Stars, shared in a preview for the show that 20th Century Fox later cut ties with her because she took DeGeneres to the premiere.

"My movie premiere for Volcano, I had told them that I was taking Ellen as my date and I was told if I took Ellen I would lose my Fox contract. At that moment, she took my hand and said, 'Do what they say' and I said, 'No thanks.' I took Ellen to the premiere and I was ushered out before the movie even ended and was told I was not allowed to go to my own after-party for fear that they would get pictures of me with a woman.

"She was warning me, 'This is going to happen.'"

Heche added: "I was in a relationship with Ellen DeGeneres for three-and-a-half years and the stigma attached to that relationship was so bad that I was fired from my multi-million dollar picture deal and I did not work in a studio picture for 10 years."

DeGeneres worried that she was ruining Heche’s career.

"I tried to back out of her life," she said.

But Heche wouldn’t let her do it.

Over the next three years, both women’s careers suffered. But their relationship stayed strong. Heche says DeGeneres knew everything about her, including her identity as Celestia. The couple talked openly about wanting to have children.

"I would love to adopt, but Anne really wants the experience of having a baby," DeGeneres told People. "We want to have several."

Heche directed DeGeneres and Sharon Stone in the 2000 tele movie If These Walls Could Talk II, in a storyline about two gay women trying for a baby. The couple held hands as they did interviews for the tele movie together. 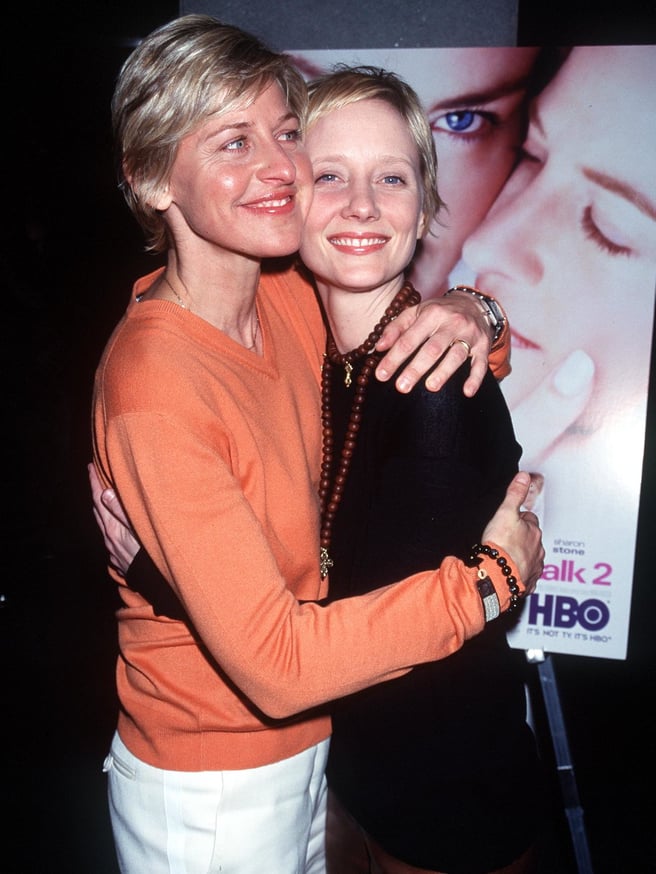 Ellen DeGeneres and Anne Heche at the premiere of If These Walls Could Talk II. Image: Getty.

"We’re very lucky women, that we get to have what we have," Heche told reporters.

"It’s a celebration every single day," DeGeneres added. "It’s kind of disgusting and crazy that we’re like... Oh, we’re so lucky."

In August that year, the couple were seen house-hunting hand in hand. But days later, it was all over. According to DeGeneres, Heche just "walked out the door" and she was left wondering what happened.

Heche says they had gotten to the point where they were not happy together anymore.

"We had become isolated from the world, together. I am a person who loves people, who loves being in the world, who loves acting. All of these things that I didn't have, and I wanted them back."

Listen to The Spill, Mamamia's daily entertainment podcast. On this episode, co-hosts Laura Brodnik and Kee Reece discuss the bullying allegations on The Ellen Show. Post continues below.

The couple issued a statement to the New York Daily News, which ran on August 19.

"Unfortunately, we have decided to end our relationship," it read. "It is an amicable parting, and we greatly value the three-and-a-half years we have spent together."

That same day, Araceli Campiz, who lived with her family on a dirt road in Cantua Creek, California, heard a knock on the door. She answered it, and was shocked to see Heche, who she knew from the movie Six Days, Seven Nights, wearing just shorts and a bra. Heche explained she’d walked from where she parked her car – more than two kilometres away – and asked for water and a shower. She then sat on the couch and asked for slippers.

"She wanted to watch a movie," Campiz told People, "but the VCR was broken."

After half an hour, Campiz, not sure what to do, called the police. When they arrived, Heche told them she was "God" and was going to "take everyone back to heaven... in a spaceship". Heche was taken to hospital but released a few hours later.

"I was told to go to a place where I would meet a spaceship," Heche later explained. "I was told in order to get on the spaceship that I would have to take a hit of ecstasy."

She says she regained her sanity that day. Two days later, she flew to Toronto to start work on the movie John Q with Denzel Washington.

In the months that followed, Heche went to "a lot of therapy", and wrote a memoir, Call Me Crazy. She also started dating Coley Laffoon, a cameraman she had met on DeGeneres’ comedy tour. They married in 2001 and had a baby in 2002.

She said it was the first time she’d had her heart broken, and it was in "a big way".

"Because there is no closure," she added. "I’ve had a girlfriend who was killed in a car accident. I know what it’s like to lose someone, and that’s a horrible feeling, [but] it’s almost worse to lose someone and know they’re still alive out there, and I don’t understand. So it was a big heartbreak."