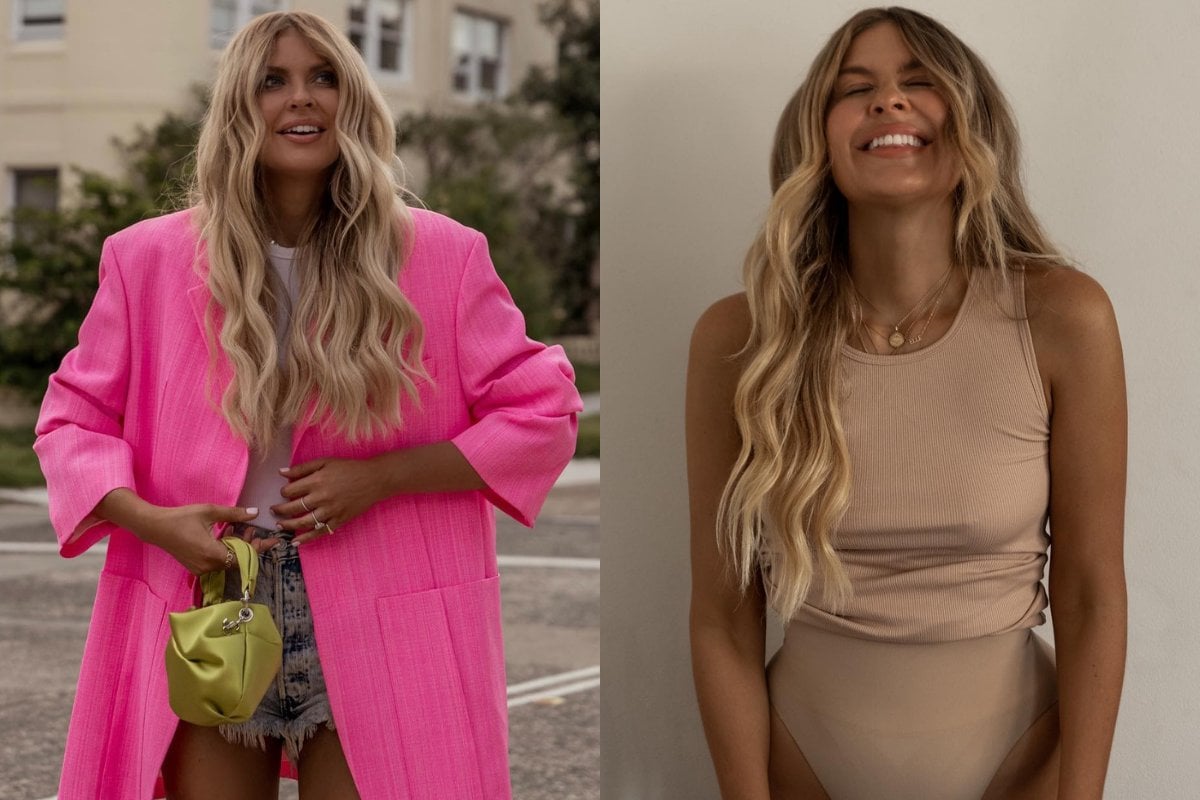 What I Put On My Face is Mamamia’s celebrity beauty series that takes you inside the beauty cabinets of some of Australia’s most influential people. From what skincare products they use to their go-to makeup tips, it’s a pervy look at exactly what they put on their face. And body. And hair. You get the idea.

This week, we speak to Sydney influencer and entrepreneur Elle Ferguson, to hear about her favourite beauty products and exactly how she gets those signature beachy curls.

The Bondi-based influencer, entrepreneur, podcast host and Olay ambassador is known for her mermaid hair, immaculate tan and wardrobe that, quite frankly, rivals Carrie Bradshaw's.

If you're one of the 680,000 people who follow her on Instagram, you'll already know all that; and there's a good chance you want details on just how she achieves her effortless look.

Well, same. So we asked her.

Here's every beauty product and tool Elle Ferguson swears by.

"I'd say it's minimal, but I think if you opened up my cabinet, you'd have the complete opposite," Elle told Mamamia.

The influencer - who mostly shoots her content in Bondi Beach - goes for a beauty look that reflects her surroundings.

"I like to look a bit sun-kissed, like I've spent the day at the beach," she said.

But while that sounds simple to achieve, it involves a few products...

Before COVID, especially while travelling, Elle noticed her skin would regularly go from bright and bouncy to flat and dull.

During lockdown, she trialled lots of different products to see what would keep her looking radiant, and one product came out on top: the Olay Regenerist Collagen Peptide24 Cream, ($29.99).

"I find that I need a moisturiser that has collagen in it because [otherwise] my skin goes really flat."

Other than that, she keeps her skincare routine pretty basic - and it's out of necessity.

Elle explained that after testing out all those products, she got something called "cosmetic overload".

It broke down her skin barrier and left her with "a really bad case" of dermatitis under her eyes.

On the upside, it helped her figured out what works:

The makeup artists Elle works with noticed how the products visibly improved her skin.

"They were like 'your skin texture is amazing'... they could see the results first-hand," she said.

And the final step in Elle's skincare routine: lip balm.

"I can't go anywhere without something on my lips," she said.

"I put it on first thing in the morning and last thing at night."

"I reckon I've pretty much had the same look my entire career," Elle told us.

"Number one, it always starts with a tan. There's no safe tanning, so I've never tanned outside hence why I made the Elle Effect (Elle's very own tan brand).

Sadly Elle's favourite Stila primer and SPF duo is discontinued in Australia (she ships it in bulk from the US), but her foundation is a cult favourite: the Giorgio Armani Luminous Silk Foundation, ($105).

"I can't be without it," Elle said. "And I use [the] Shiseido Hanatsubaki Hake Polishing Face Brush, $79, to buff it in - it's phenomenal."

"I love a combed up, angry-looking brow," she said.

To pull it altogether, she employs a makeup trick she's been doing since high school: "white or nude eyeliner on the waterline in your eyes to make them look bigger."

The most important question we needed to ask Elle: "how on earth do you get your hair like that?"

"That is the best curling wand out there - it heats up so quickly and you don't have to leave it on there that long."

"Another trick [is] you've got to brush your curl out - put your curl in, let it cool down then brush it out," she shared.

"Don't be afraid to brush it out because you want it to be a bit undone, a bit messy, a bit bed-hairy, but you did spend 45 minutes doing it... and dry shampoo."

Elle swears by the L'Oreal Tecni.ART Morning After Dust, ($36.95), insisting "you need that texture and that grit to hold the curl in" even if you've only just washed it.

And the way she recommends using dry shampoo might surprise you:

"Get out [of the shower], dry your hair then spray your head with dry shampoo, go to sleep, brush it out in the morning then put the curl in," she said.

And finish off with hairspray. Her favourite is the L'Oreal Professionnel Tecni.Art Air Fix, ($32.95).

"I spray that in while the curls are still hot," she said.

And Elle's final hair hack: "To get the bend in my hair, I often tong my hair and then I wear a running cap over the top because it flattens the top and flicks the sides out.

"So, if anybody ever comes over when I'm mid-hair, I'll be walking around in a full face of makeup with my running cap on."

Elle's home is just as cool as her wardrobe - there are coffee table books stacked everywhere, layered with jewellery and perfume bottles on top.

It'll come as no surprise that she loves to wear a variation of scents... at the same time.

"I'm rolling in way too many perfumes at any given time because I love to layer them," Elle shared. "I'm somebody who puts three or five of different perfumes on at once."

And if she's not wearing a few together, she comes back the same sentimental fragrance.

"If I'm not layering a classic Chanel with a Tom Ford and YSL, I've got Joel's [Thé] Noir on."

Scroll through Elle's Instagram story on any given day and you'll more than likely see her posting about her daily run on her treadmill.

She gradually added in running - 10 seconds every kilometre - and now almost two years on, she's just shy of her goal: a 10 kilometre run in an hour.

Picking up running "changed her life", and so much more than just physically.

"It's a mental gain and a mental saviour. The body and the fitness is the cherry on top," she said.

"It's just changed the way I do a lot of things - being [headstrong], believing in myself so much more and actually just saying to myself when something seems really hard... 'well, you did it yesterday, you can do it today'.