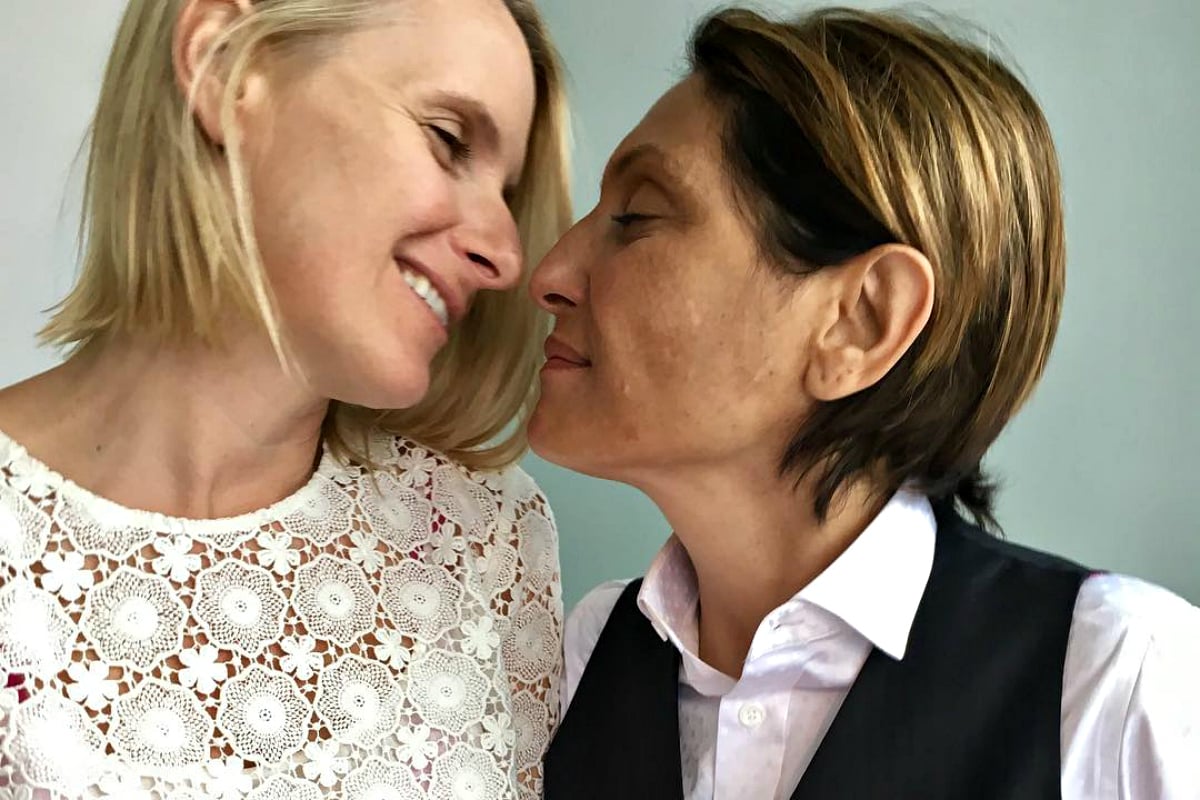 The best-selling author of Eat Pray Love imagined a world without Rayya in it. In that moment, she knew. She knew her marriage to José Nunes — which had been "working beautifully" to that point — was never going to work again.

"I pictured her dying without me ever telling her how much I loved her, and then having the rest of my life to know that the great love of my life had come and left from the earth without me telling her my feelings," Elizabeth told Mamamia's No Filter podcast.

"And that was an absolutely unacceptable vision."

Eliizbeth separated from Nunes in July 2016; the end of a 12-year relationship that 12 million people had read about in the 'love' segment of her 2006 memoir.

Two months later, Elizabeth announced her relationship with the Syrian-born author and musician via Facebook: "I do not merely love Rayya; I am in love with Rayya," she wrote. "And I have no more time for denying that truth."

Over the next year-and-a-half, Elizabeth walked by Rayya's side as her partner, her great love.

"She and I lived this huge lifetime together of the most beautiful, romantic story ever, followed by the most brutal, harrowing, awful romantic story... And then, at the end, just finding each other again in a very different sort of space," Elizabeth said.

"Both of us had been very sobered by that experience and very silent, respectful of death, respectful of one another. [We were in] a very tender and very beautiful space at the end."

She was my love, my heart, my best friend, my teacher, my rebel, my angel, my protector, my challenger, my partner, my muse, my wizard, my surprise, my gift, my comet, my liberator, my rock star, my completely impossible non-cooperator, my otherworldly visitor, my spiritual portal, and my baby. I loved you so much, Rayya. Thank you for letting me walk with you right to the edge of the river. It has been the greatest honor of my life. I would tell you to rest in peace, but I know that you always found peace boring. May you rest in excitement. I will always love you.

More than two years have passed since that day.

Elizabeth had a brief relationship with British photographer Simon McArthur in 2019, but she is now single and learning what it means to live in that post-Rayya world she imagined back in 2016.

Here are some of the insights about grief and loss she shared on No Filter.

"One of the wisest things that was told to me was by one of the oncologists who was working with Rayya. He told me, 'Expect the stages of grief — that's accurate, but they just don't come in order.'

The question she asked herself...

"It's a really, really daring question and I would never assign anybody to ask that, because I think that people have to walk through their grief in their own way. But that's the challenge that I laid out to myself."

For Elizabeth, this was the answer:

"There are strengths that I'm discovering that I would have never discovered because I was so dependent on her. I was so emotionally dependent on her; she was my anchor, she was the ground under my feet, she was my first phone call in a moment of disaster... I've had to find that in myself."

"There's a level at which you could ask the question, 'Would you rather have this life or that that life?' But those questions are moot because you don't get that choice — it's not available. Whenever I hear anybody say, 'I wouldn't trade my life for anything,' I was like, 'Was it offered?'

"It wasn't offered to me that Rayya would live. And the less I rebel against that and the more I flexibly lean into that, the better my life after Rayya becomes."

"In the empirical, non-mystical, post-Enlightenment West, there's an idea about grieving that says that you're not going to be well until you've 'let the person go'. That is so mean. And it's also something that literally no other culture believes...

"I think it makes people feel a lot of shame when they haven't and can't let go.

"I don't think you should have, that you're supposed to, that you were ever supposed to. I think the one thing in the world that you never ever, ever have to let go of is love. Everything else goes.

"They took [Rayya]; they took her body. She's never going to walk into this house again, and I'm never going to be able to put my arms around her again; there's no negotiating that. But I know exactly where she lives in the universe. She is embedded it in my heart and she's incredibly present in my consciousness.

"I meet Rayya a room in my consciousness called imagination... We used to say 'tuckled in' — like 'come into my arms and tuckle in' — and she lives tuckled, tuckled, tuckled very safely in my heart. There's that level at which I never will and never have to lose her."