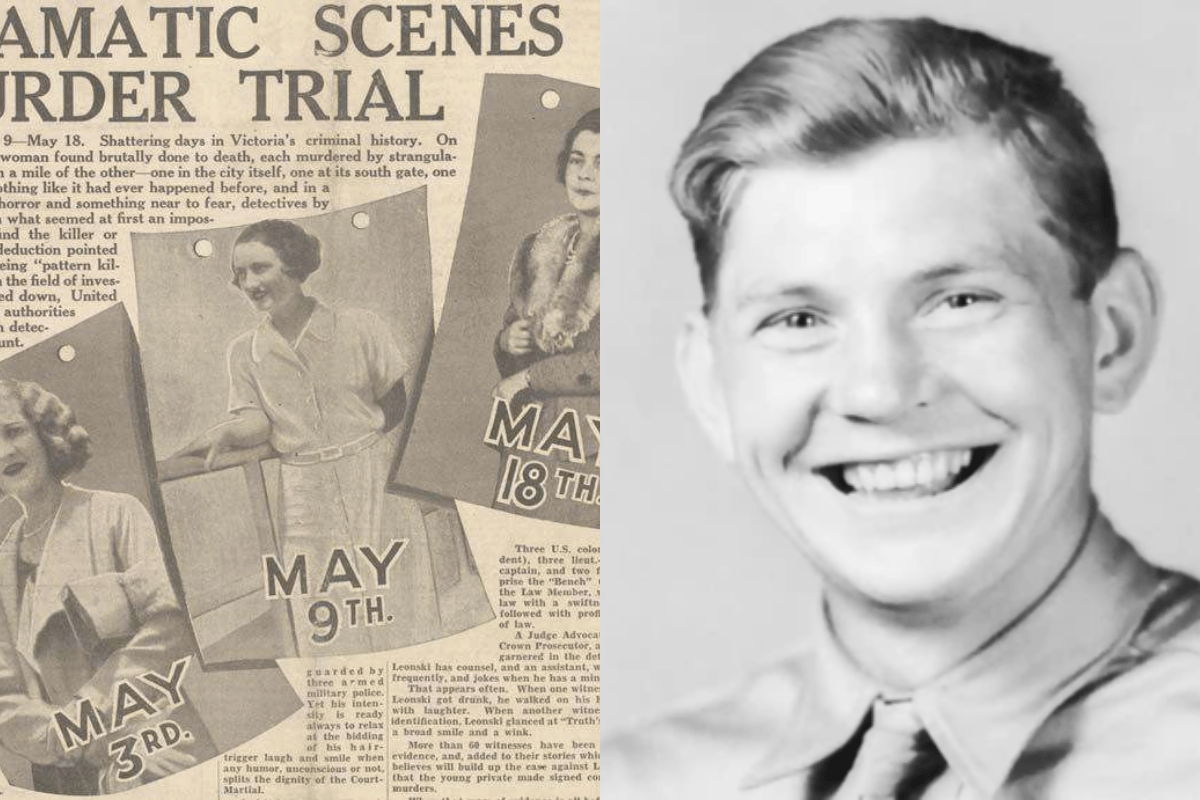 Edward Leonski was a handsome, tall private in the US Army, stationed in Melbourne alongside 15,000 other troops in the early 1940s.

The American soldiers were big, burly and a shining picture of the 'American dream', with their neatly pressed uniforms, generous pay checks to spend however they pleased and big, wide smiles.

But Eddie - while handsome and charming to a fault - was unlike other soldiers. He was unlike anyone, really.

In fact, his reputation amongst his peers was disturbing. Not only was he a drunken show-off, he was prone to worrying bouts of violence. If he wasn't serving breakfast to those in Camp Pell - where he and the other soldiers were living while in Melbourne - he was falling into an inebriated, vicious stupor.

There was something else about Eddie too, something much more sinister. He had an obsession with women's voices.

It was an obsession that would turn him into a killer war-time Melbourne would come to know as 'The Brownout Strangler.'

Listen: to this week's True Crime Conversations delve into the case. Post continues.

Leonski had a troubled upbringing.

The sixth child of Russian-Jewish immigrants, his childhood home in New Jersey was one regularly exposed to vicious beatings and drunken cruelty by his father.

He was a mummy's boy, and was often comforted by his mother singing him to sleep of an evening. The theory goes, that this is where his obsession with female voices began.

As author of Murder At Dusk Ian Shaw told Mamamia's True Crime Conversations, "Eddie was an archetypal male who puts all women into one of two categories; the Madonna or the whore. And to Eddie, the Madonna's were the ones who sang. Everyone else, including women who were just lovely, lovely women, he would read their behavior as representing something that it didn't."

"To me, he was always looking for something in womanhood - in feminine energy - that he could never find. He wanted all the women to be like his mother, but to be lovers as well."

As an adult, Leonski was a bodybuilder, a boxer and an alcoholic. He was called up to the US Army in 1941, and arrived on Melbourne soil on February 2, 1942. According to reports, he already had a violent track record by the time he arrived, having gotten away with attacking a woman on the streets of San Antonio.

Just three months after his arrival Leonski had murdered for the first time, taking the life of 40-year-old Ivy McLeod.

Thanks to the government-mandated brownouts during the wartime era, Leonski's murders were committed in the shadows, at a time where street lamps were few and far between and car headlights were taped over to omit only the smallest slices of light.

According to The Advertiser in 1942, "only one street lamp in four is lighted, and these are shaded as to throw a dim light of not more than 40 feet in diameter. Electric trains have only two-thirds of each carriage lighted, while city and suburban stations have their ordinary lighting dimmed at least 50 per cent. Headlights on most Melbourne trams have been fitted with hoods..." 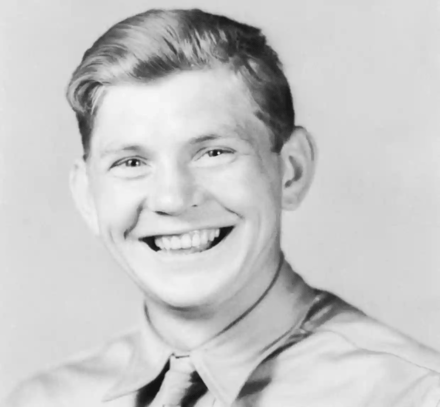 Combining the brownouts with Leonski's charming facade, he was able to target lone women on their way home. It's exactly how he found Ivy, who was on a mission to reinvent herself after separating from her husband. That night, she was on her way back from visiting friends and was waiting for a tram home in Albert Park at 2:30am.

Leonski had been at a pub in St. Kilda, drinking from 11am. At around 2:30 am, he began his stumble from the bar to the tram. As Shaw explained he was feeling dejected and bitter after being kissed by a woman earlier that night.

"He thought her breath smelt of tobacco.. He was just drifting and feeling bitter about his life, about failure," he said.

As the two crossed paths, Leonski took the opportunity to murder Ivy in the most horrific of circumstances. He strangled her, and left her half naked body to be found by passers-by the next day, propped up in front of a shop door.

"I think he believed that any woman who would let him get - not just physically intimate, but allow him into her space...she must be a bad woman. And to show his total disgust at the woman, he would tear their clothes up above their waist and down to their waist, so their entire pubic area and breasts would be exposed. He would arrange the body so that the first thing anyone saw was this semi-naked body with the legs spread apart...it's telling the world how they should be viewing this woman," Shaw told True Crime Conversations.

31-year-old Pauline Thompson was a singer from Bendigo, but had travelled to Melbourne to perform for the troops. After meeting Leonski on the evening of May 9, the pair shared a few gin squashes together.

After dropping her home, Shaw thinks Pauline might've been leaning in for a goodnight kiss when Leonski wrapped his hands around her throat.

He arranged her body in the same fashion as Ivy, and left her to be found at first light. Shaw thinks he might've also sexually assaulted Pauline after her death.

As the second murder made headlines, the women of Melbourne were left horrified.

"They were very afraid," said Shaw. "My mother and two of her sisters were in Melbourne during this period, and they said it was almost overnight it went from 'we love Americans' to 'we hate Americans, we're scared of Americans.'"

A man in an American army uniform had been placed at the scene of Ivy's death, and Pauline was last seen drinking with an American. All eyes were on the US Army.

On May 18, Leonski killed for a third time.

Just like the women before her, 40-year-old Gladys Hosking was strangled to death, not far from Leonski's home base of Camp Pell. Her body was arranged in the same semi-naked fashion.

"Two of the three victims were middle-aged...probably within a few years of the age of his mother," Shaw pointed out. 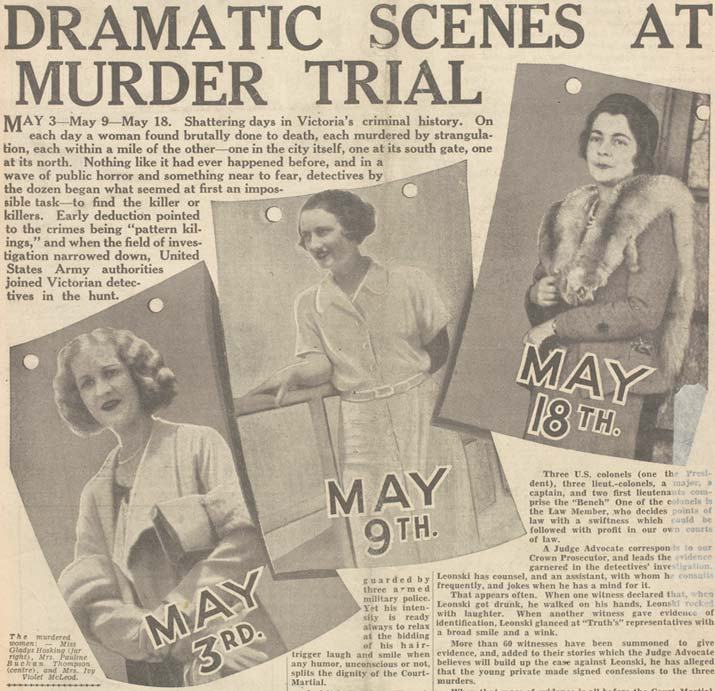 It would be a near-victim who would be his undoing.

He'd followed her home from the tram, and just as she went to open the front-gate, he grabbed her. Thankfully, her uncle opened the door and scared him off. But they both clearly saw his face.

A number of identification parades were held amongst the American troops in Camp Pell, and it was after one of these that the woman's uncle spotted Leonski wandering past.

Once caught, when he realised the evidence was undeniable, Leonski was an open book. He admitted to everything.

He was taken into custody on May 22, 1942, and due to the tense political relations between the Australian government and the USA, Americans were allowed to conduct the trial.

His explanation for the murders, was the "overwhelming force within him that he couldn't control," said Shaw. He described a beast inside him who made him do things he wouldn't normally do.

He would later admit that his desire to kill had been spurred on by the sound of their voices.

"She had a lovely voice. I wanted that voice. She was leaving to go to her house, and I did not want her to go. I grabbed her by the throat. I choked her... I choked her," Leonski stated during his trial in 1942.

After being declared sane, Leonski was sentenced to death.

"Now, Gentlemen, the 92nd Article of War states that the penalty for murder shall be one of two things, death or life imprisonment. I am fully conscious of the awful responsibility of saying that a human being has forfeited his right to live, but I do say to you... that Edward J. Leonski, by the fiendish and atrocious quality of these three crimes has demonstrated himself to be a person unfit to continue to live," the prosecutor of the case, Hayford Enwall, declared during his trial.

He showed no sign of remorse to the day he died.

"Why do you have a long face?" he had joked to a prison guard as he awaited his fate. "I'm the one they're going to hang."