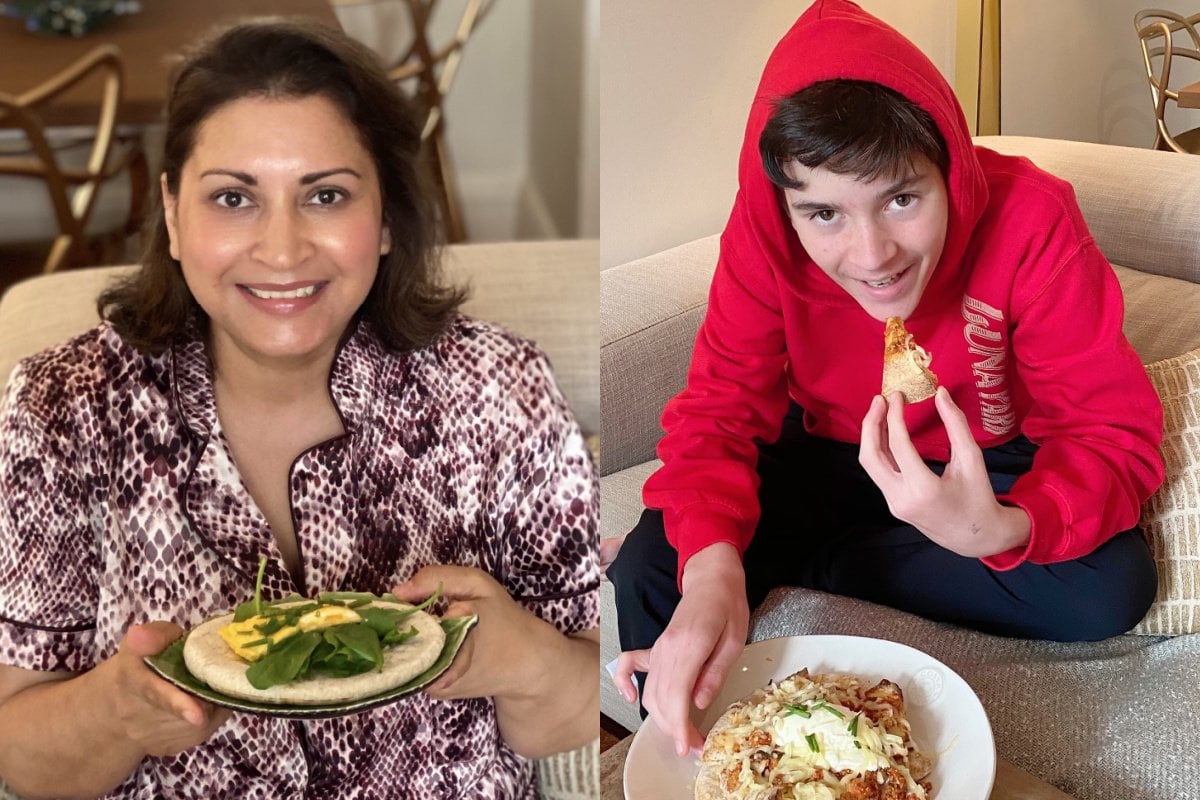 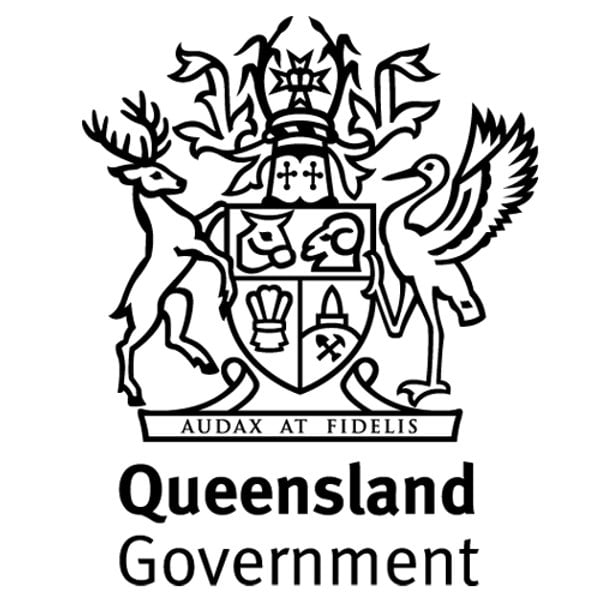 Thanks to our brand partner, QUEENSLAND HEALTH

If you’re a parent of a teenager, you’ll know it’s bittersweet, because suddenly they’re independent and want to do all the things for themselves. Organise their social lives, decide their wardrobe, not have you set foot near their school…And, as in my case, even feed themselves.

My 13-year-old son, Winston, was never into cooking until he began Home Economics this year at school. He’s loving it, and has learned a lot. To my delight, he told me a few months ago that he wanted to start making some of his own meals. Oh, the mum pride.

I soon learned that Winston intended to have a weekly menu of instant noodles…cheese toasties…and pancakes.

But it wasn’t just the complete lack of nutrition or even real food that concerned me the most - Winston was also missing out on the joy of cooking.

In Australia, many of us are so lucky that we can think about what we’d like to eat, buy the ingredients, and then prepare it for ourselves and the people we love.

Well, that’s my view on cooking. Winston’s is a tad more practical/teenage boy.

Still, his horizons need to be expanded. Cooking is a basic life skill, but is also so much fun. We need quick, simple and delicious recipes - and we've found a variety of great meal ideas from the Queensland Government’s Healthier. Happier. website.

Pro tip: It’s a great quick reference guide for how to best fuel and challenge your body, with food and fitness guides, planners, and helpful tools like the Health & Fitness Age Calculator. And of course, lots of recipes from light meals to main meals to desserts (as well as the very helpful 'Easy' category).

Winston chose the recipes he wanted to try and make, and were 10 minutes maximum to prepare.

This is Winston’s absolute favourite dish, so he was keen to give it a go. He was surprised that it was so straightforward and nutritional, with ingredients like capsicum and tomatoes packed in there.

He’s watched me make a tomato-based mince sauce a billion times, so that bit was easy for him to tackle. He did learn a bit about ‘popping’ bubbles landing on your clothes, though.

We hit a snag when we realised our pita bread was too thick to be baked into crispy chips, but it worked out better, because as Winston said, the bread was stronger to carry more sauce!

I came in just in time to see him helping himself to this amazing dish he’d apparently cooked for me. Looks like he enjoyed himself, right? 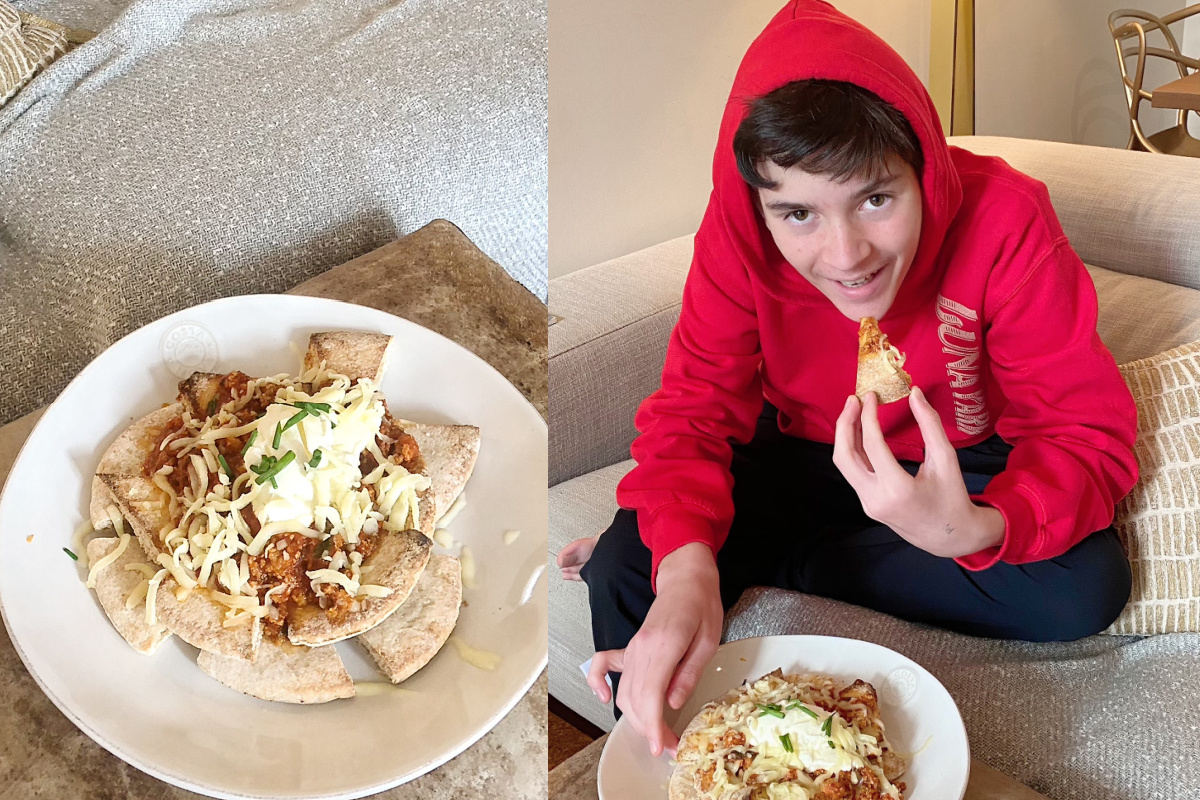 I made him at least put chives on the top for the photo. Image Supplied.

Next, Winston promised to make the brekkie wrap with egg and spinach on Sunday morning. Because he’s used to flipping pancakes, he was OK with basically just breaking eggs into a pan, stirring them up, and waiting for it to become sort of an omelette. (The recipe says you can just put the eggs in the microwave.)

He assembled the wrap with raw spinach (I hate it cooked). Greens! This is a good habit, kid.

We also realised that a thinner wrap, as it was meant to be, would have ‘wrapped’ better, but that was a lesson for next time. I didn’t mind, anyway. Look at my smile – I was one happy mum. 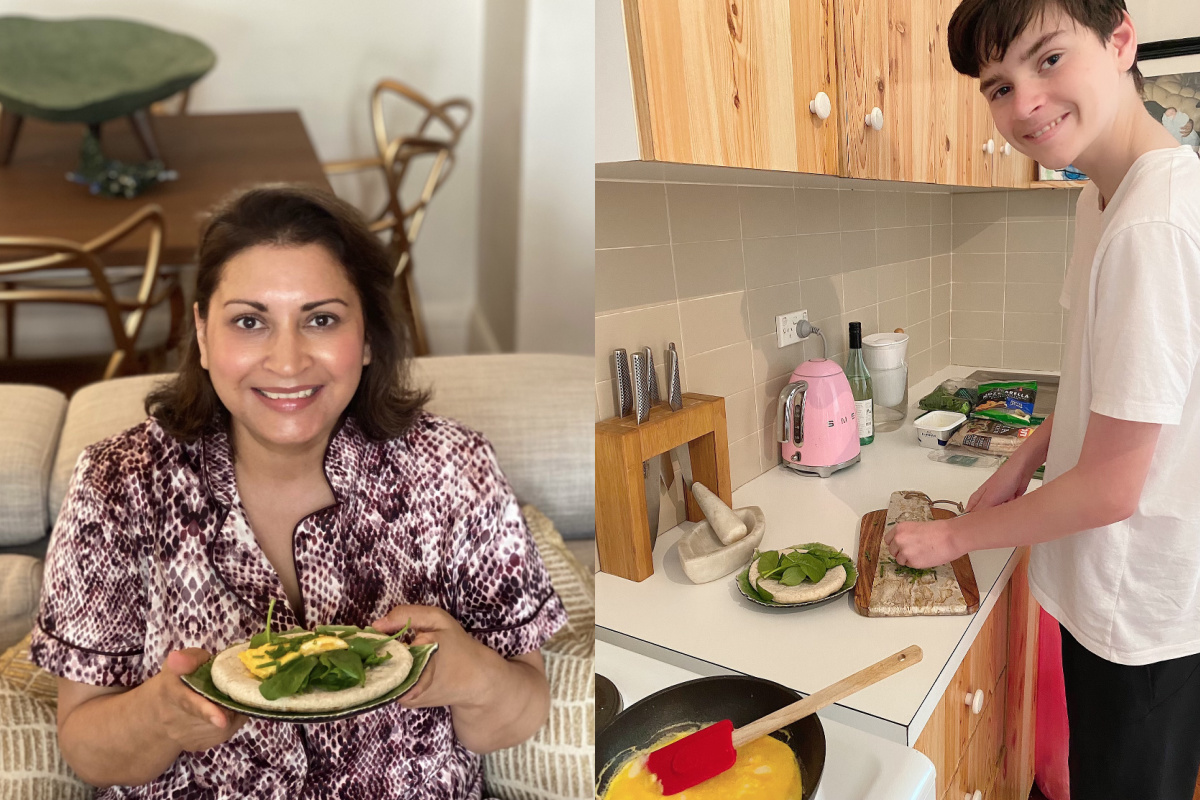 A good kind of ‘chop, chop’ on a Sunday morning. Image Supplied.

We normally like our fruit fresh, which is why Winston was intrigued by the idea the idea of the baked banana boat in the dessert section of the website.

This was a really easy recipe. Just split open the banana, and stuff it, and your mouth apparently, with dark chocolate chips.

Because our 1960s kitchen has an unpredictable oven, I was a bit nervous about the 20 minutes to caramelise the banana, so we pulled it out a little earlier. The banana flesh was still gooey, and the chocolate slightly oozy. So yum. 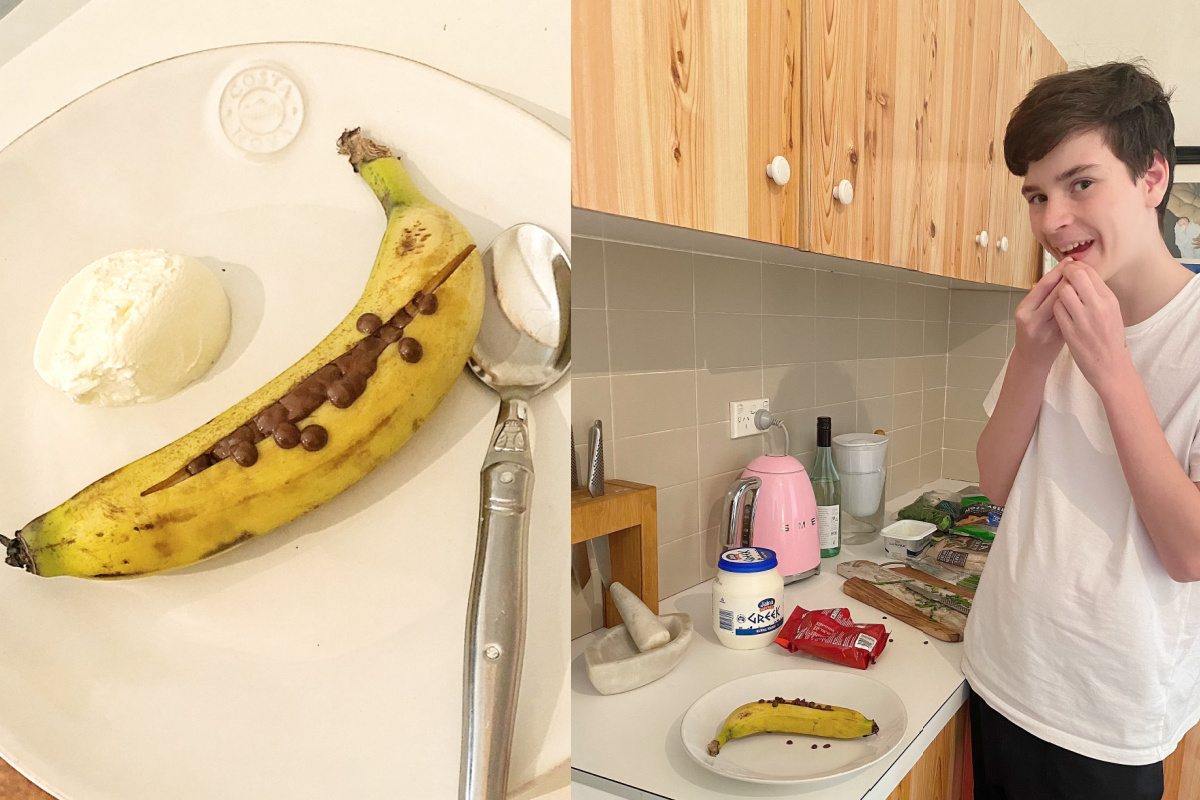 One for the banana, one for Winston, and repeat. Image Supplied.

I encouraged Winston to put a salad on his list and we settled on a Waldorf salad, minus the walnuts, because he’s allergic to them.

I have to tell you, Waldorf salads are my favourite, and this one was so delicious…despite no walnuts, or red apple for colour (yes, they also somehow didn’t make it from the list into Winston’s shopping cart). But look at that salad! 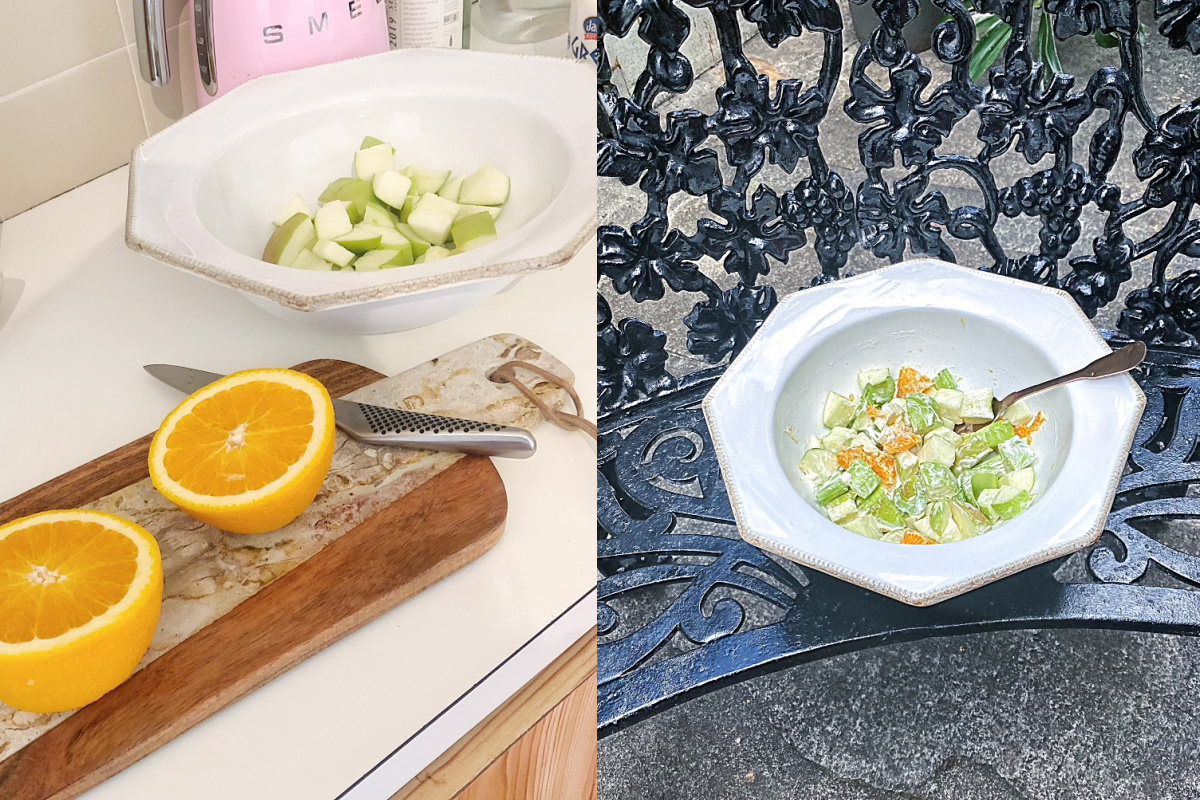 The bright orange flesh we added for colour didn’t add further ‘dimension’, but we devoured it anyway. Image: Supplied.

We ended the week with a rice dish, mushroom risotto, because I firmly believe knowing how to handle rice can set you up in the kitchen for life.

And also, I knew Winston would love the technique of making risotto. Rice, mushrooms, into the pot, and pour the stock and stir, bit by bit, using the absorption method. He liked seeing the rice ‘come to life’ like that. 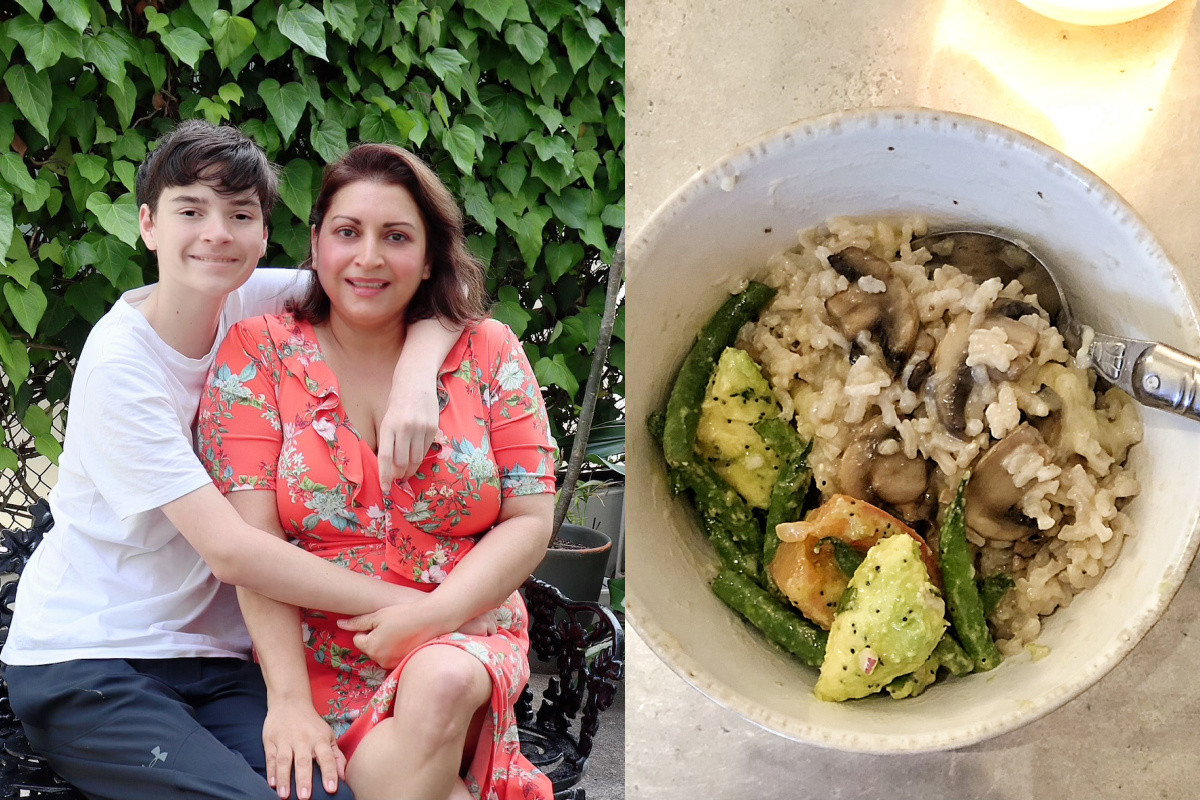 I added some veggies to my serve, but I went back for more risotto later. Image: Supplied.

Although he tried to play it cool, Winston really enjoyed the process of being in charge of some meals during that week. Dare I say, he even found it fun, nutrition-packed and edible by both of us.

He even wants to do it again, which is a win for me.

So, move over instant noodles – Winston Wednesdays and Nachos for Nama will be visiting every week.

Healthier. Happier. Get and stay healthy with our healthy recipes, tips, exercise videos and handy guides.