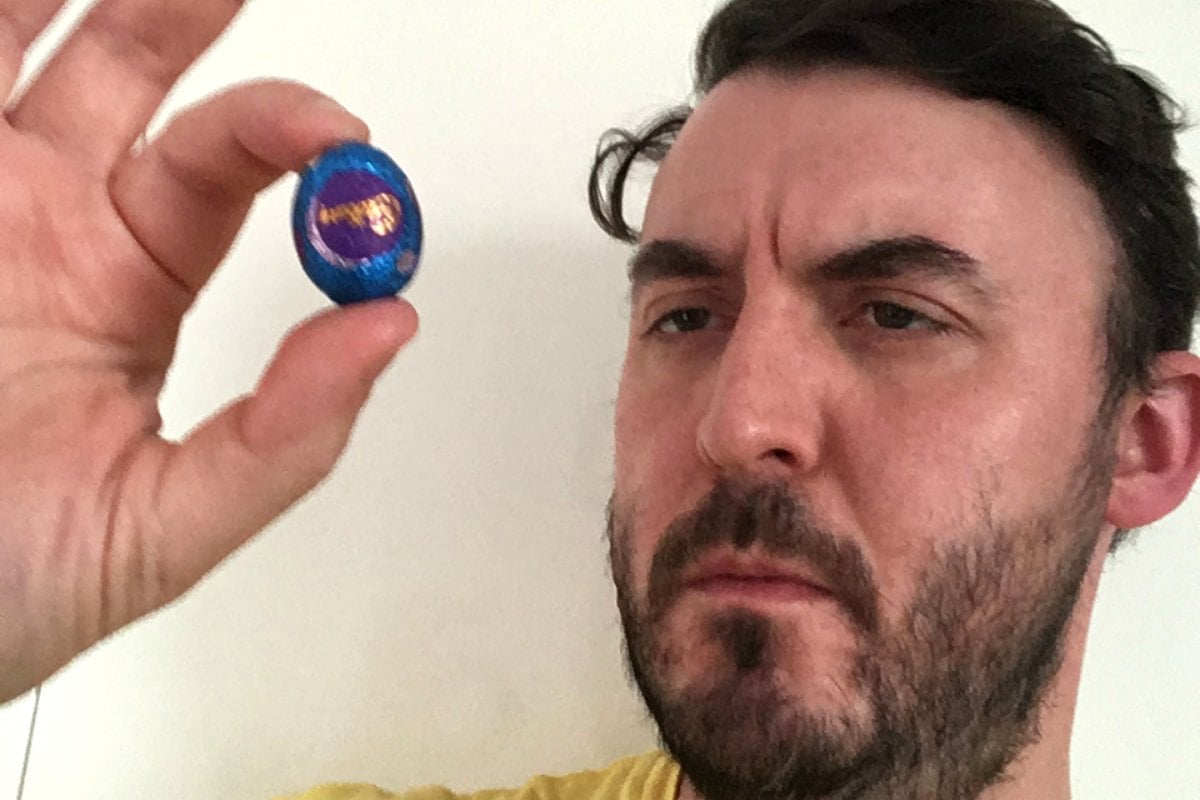 I’m at the local park and I’m surveying what is about to become a battle field. Rival of kids from competing families are primed for the “The Hunt”.

All of the competitors have been escorted to the barren wasteland (aka, the carpark) so we parents can hide eggs in plethora of impossible locations. Several unlucky parents have drawn the short straw and are trying to control the ravenous horde.

Eggs behind razor-sharp bushes. On the upper branches of trees. And a few tiny, shiny eggs strewn across the mixture of grass and dandelions so the kids don’t lose hope and give up on the chase. You’ve got to give the little kids a chance at finding an egg or two, before the 10-year-olds race by and gobble up all the chocolate.

The children are barely containing their rage as they wait to be released from the bitumen prison. A father yells with a tribal scream for the hunt to begin! Is this an Easter Egg Hunt or the latest Hunger Game spin-off? Kids are running wild.

They’ve clearly descended into a state of sugar-deprived madness as they maraud through the suburban park. There’s pushing and shoving, and helicopter/lawnmower parents (including myself) trying to find a handful eggs for their children so as to avoid a Chernobyl-style meltdown when your child has fewer eggs than another.

Then, like an unexpected turn in a dimly-lit Game Of Thrones battle sequence, rogue children from across the park begin to infiltrate our carefully-managed hunt.

Several parent/Egg Hunt Wardens chastise these naughty unauthorised children and politely chase them away. These vagrants don’t seem to be too concerned with our sabre-rattling phrases including but not limited to, “Where are your parents?”

Tragically, some of our eggs have been taken. But we parents manage to omit this cruel fact of life from our Egg Hunters.

Finally, the hunt has ended. Some parents are worn out from the unexpected cardio.

Nobody told us that we would have to secure eggs for our kids and try to protect our horde of chocolate from interlopers like a dragon coveting a mountain of gold. This egg hunt was not what I remembered in the 90s: kids in the backyard whilst their parents drank wine inside the house.

Following the hunt, we move to “distribution”. This was new to me. Back in my day, to the victor went the spoils (or the most effective helicopter parent). Either way, there were winners and losers.

In a 2019 Easter Egg Hunt, all the children were asked to form a line and pour their precious chocolates into a multi-coloured pile on a picnic mat. Then, eggs were distributed evenly, much like Post-War rations. It is fair, but at the same time, I feel like the hunt was redundant. It was an elaborate facade.

A 12-year-old boy walks away solemnly with four eggs in his cradled in his hand muttering “life isn’t fair”. To an extent, I’m inclined to agree with him. He must have had over a dozen eggs and before he had the chance to taste the spoils, he had to hand them over to the parents so we could emulate austerity measures.

Like the great Carrie Bradshaw, “I got to thinking…” Has the hunt gone too far? Or have we lost sight of the hunt? We don’t want some poor kid walking away without any eggs, but the whole point of the hunt is that there are winners and losers.

It seems that we as parents (very much including myself here) are trying to make things as fair as possible. Essentially, we’re taking the thrill out of the chase. We want everyone to be a winner.

I remember Easter Egg Hunts at my grandma’s place as a kid. I’d be battling with my cousins for as much chocolate as we could humanly consume.

And after the sugar crash, we’d reflect on the eggs that we missed. Those ones hidden behind the flower beds that our keen-eyed siblings and cousins would collect.

But that’s all part of it. You’re in the hunt, but you may not win it. And you’d hope that you could get more eggs next year. As long you got a little chocolate, you were a winner.

What are your rules for the Easter Egg Hunt? Tell us about it in the comments section below.

Jeffrey Charles is a writer and comedian, based in Canberra. He has a YA book coming out later in the year and he has an hilarious comedy podcast. Check it out here.

I read this article in a David Attenborough voice.

"From the safe confines of the carpark the young rush forward seeking vital nutrition during the plentiful times to make it through the harsh upcoming winter months, while the parents patrol the perimeter watching for incursions from strays from a hostile group. After feeding and driving off the intruders, the young congregate ...."

Still liked the article though :o)

As I remember it, my 5 brothers and I all got in teams of two (a big kid and a little kid in each team.) We all shared the hunted eggs equally, but the winning pair got a special prize, usually a giant chocolate egg with extra sweets inside it. Honestly, though, I think the winners usually shared at least a piece of the giant egg with everyone anyway and we all had enough other chocolate to make us all throw up every year either way so it didn't really matter.