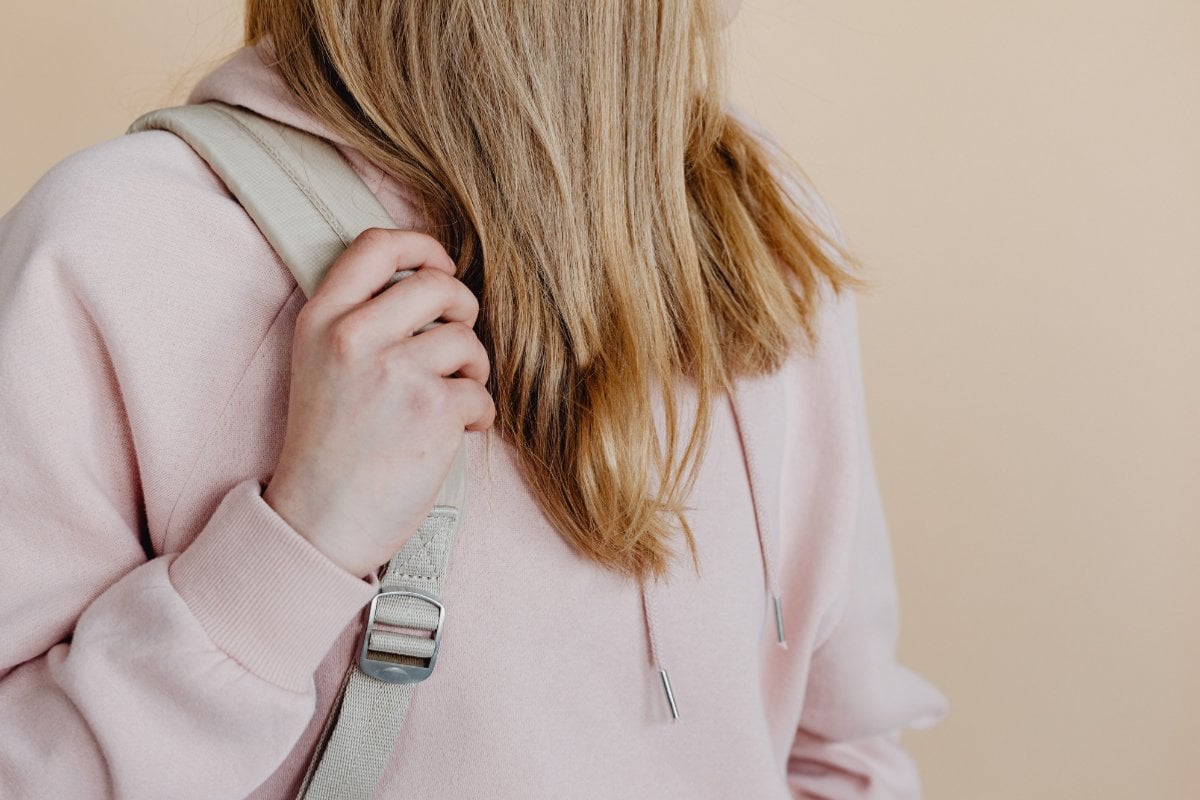 I was filled with anxiety and confusion when it all started to unravel.

In the winter of Year 7, after a successful time in primary school, my 12-year-old daughter Avery began what would be a four-year disengagement from high school.

Why would a privileged, middle-class adolescent choose this, when dropping out was nothing short of taboo and would seriously complicate her life?

Side note: Check out the horoscopes home schooling their kids. Post continues below.

In Year 7, many days looked like this: Avery arrived home and shrugged off her backpack heavy with books and binders at the front door.

She may have intended to do her homework, but most of the time she didn’t. She charged upstairs to the computer.

Me: Do you have any homework?

Avery: Just a bit. I did most of it at school

Me: I find that hard to believe. You haven’t done any for days. I think you’re lying.

Avery: Our teachers are going easy on us.

Me: Your computer time is limited. You have to get off in half an hour.

Me: I don’t know when you decided homework was optional. This is your job. (Said in my best whisper scream.)

The school was forever phoning about her lack of effort, talking in class, and incomplete assignments.

Avery’s marks were variable – some good, some bad, and some failures. I started to dislike most of the teachers who only saw negative traits in my kid, always shining a light on them, which I’m sure made her less motivated than ever.

I wished they knew another side of her - how much she loved her dog, worried about her dad who recently had bypass surgery, wept during sad movies...

In Year 8, things changed as suddenly as a cloud passing over the sun.

Avery was now dedicated to school, consistently putting in time doing homework. She brought home high achievement certificates and was rewarded with her name on an honour roll, posted for all to see.

But around February, Avery’s school situation began to deteriorate again at a rapid rate. My voice echoed in my ears, “Avery, get down to work. I haven’t seen you do a thing in days. You’re going to be where you were in Year 7. I don’t want to spend my time fielding all of those calls from school. I have better things to do with my time.”

Her response: “I hate you. I wish I had a different mother, mind your own business.”

I would say about half the time I was able to contain my anxiety and not enter the ring for yet another round of school fights.

I tried to fly above the fear, tell myself all would be well.

I had read books that told me this period of high school was a low point in terms of school performance, as negotiating one’s social life took priority over all else.

I felt our relationship deteriorating, our house echoing rage all in the name of school. It was as if Avery took my desire for her to be a compliant student inside herself and threw it back at me.

I had been a lousy student and hoped she could give me some of the status afforded to Grade-A students.

Year 9 brought more turmoil. Trips to psychologists, educational and otherwise, even a psychiatrist. Hell, we did everything other than subject our adolescent to a past-life regression. All of it pretty ineffectual.

It was around this time that I started to see it just wasn’t our daughter who was to blame.

I was spending hours researching school and had to ask - does its history, structure, and practices play any role in underachievement? The answer was a resounding yes.

Should we place children in a classroom for six hours a day, five days a week for 12 years of their life force feeding them information that they don’t, for the most part, care about?

I also realised from volunteering in my kids’ primary school that students are exposed to microaggressions by school staff on a pretty regular basis.

One teacher told Avery, “you don’t have a future,” another told my younger daughter, “I don’t like liars.” Most of us have experienced this at school, especially if we were nobodies rather than somebodies.

I realise now that my anxiety and wavering resolve forced me to be, at times, as inhumane to her as the institution itself.

Of course, I loved my daughter beyond measure but I failed to get her, to see her, to empathise with her throughout what I think of as our school debacle.

Avery quit school twice in Year 10 and then signed up for several online courses, but only sometimes completing them. Let’s just say a high school graduation was never in the cards for our older daughter. Although a university degree in accounting was.

But I’m getting ahead of myself.

When Avery was 19, working in the restaurant industry as a server, she moved out and was renting a house with three other young women.

My thinking was shifting about school and I found myself saying to her, “there is no such thing as a small job, all work is honourable, you are your own woman.”

Of course, when she received my admiration and respect, our relationship became closer; more playful.

Right around the same time, I was at a dinner party where friends were gathered around the dining table talking about their kids’ accomplishments - high school and university related - and I felt genuinely happy for them rather than envious.

I realised at that precise moment as I sipped a glass of wine that my droning wish for Avery to achieve academically had vanished.

The worry that had gnawed at me for six years had lifted.

I told myself: Avery may not have graduated high school, but she has straight teeth and can swim like a fish. She makes people laugh. She has a family who would do anything for her. Education can’t buy loving partners or joyful lives.

We aren’t what we do or own, but how well we love and how in that process we treat others.

Reply
Upvote
My oldest has always hated school and by the end or year 7 and after a semester of him feeling completely miserable( therefore me too)  and talking about killing him self we turned a corner. He made good friends and got used to high school but still hates it.  But as with the writer daughter he is so much more than what he’s (not) learning at school. He won’t graduate but he’ll finish year 12 with no pressure from me and I know he’ll still be a good person, hard working  and find his niche in his life. I just want him to be happy and know he’s loved. School is such a short period of their life I don’t want it to define him.
C
cat 10 months ago

Reply
Upvote
I feel like this implies that it was the schools fault... but I think its actually trying to say it was the writer's fault for trying to live vicariously through her daughter?

Reply
Upvote
@cat Most teachers are fantastic, but you absolutely 100% do get a small handful of those who do exactly what the author wrote. I could relay a number of stories of what teachers have said/done that are completely inappropriate, both to my kids, and to other's kids. I resonated with this article a lot, however, I'm still mostly in the thick of high school.
B
beachhouse84 10 months ago

Reply
Upvote
2 upvotes
@cat yep. I know that my son was called “naughty” in preschool but was later diagnosed with adhd, a bio medical neurological disability that he has no co trol of except with medication he now has access to.
I understand how challenging his behaviour can be when he is not medicated and how hard teachers work. I also know my son works harder than most of the kids in his class to achieve at a lower level than they do.
Yes there are micro aggressions and kids fall through the cracks. Its really sad.
C
cat 10 months ago

Reply
Upvote
@beachhouse84 what word is a teacher supposed to use instead of 'naughty' if a child isn't following the rules?
C
cat 10 months ago