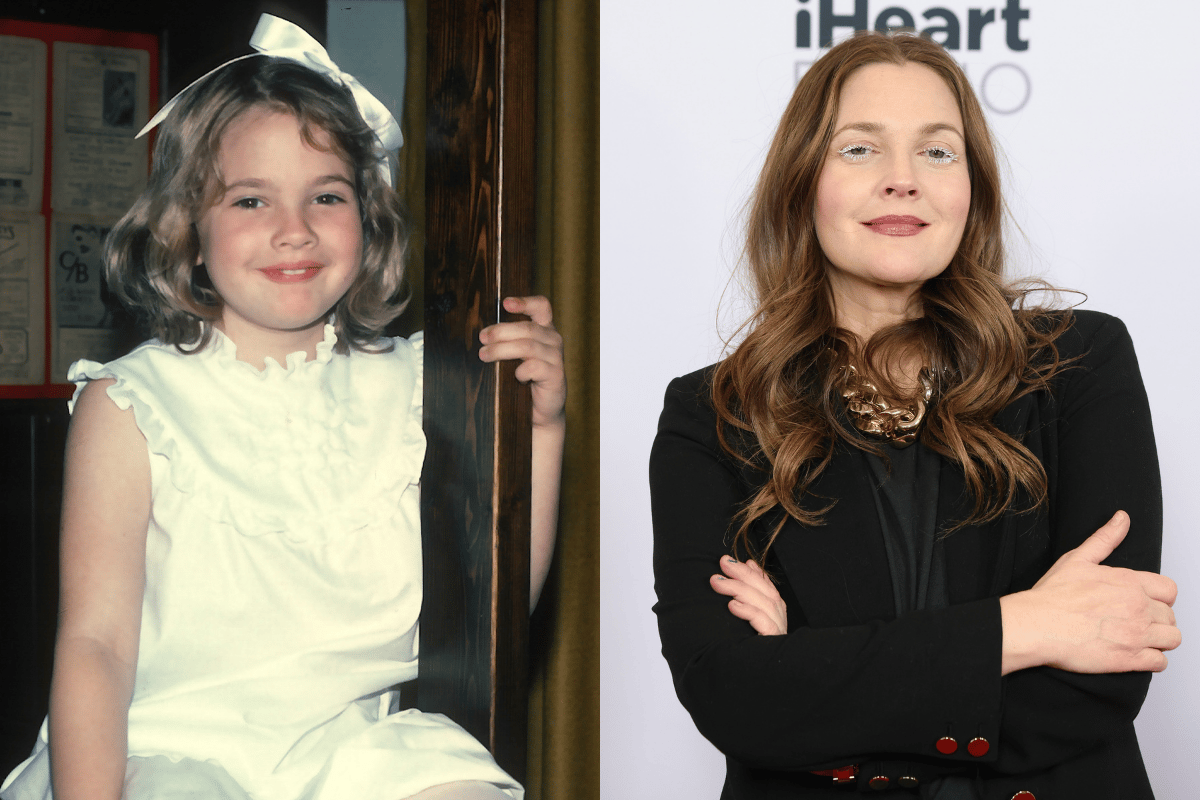 Drew Barrymore was eight when she had her first drink.

The actor was with her mother, Jaid, at the wrap-party for the sci-fi horror Firestarter. The woman went one way, the child another. Drew wound up talking to two crew members she’d come to know during filming. Young, brash and eager to please, the young star bet them she could down two glasses of champagne.

They hesitated, but she insisted. “No, I bet I can.”

A crystal glass was placed in her hand. “Down it, champ.” She sculled the fizzing liquid in two gulps. Then another glass, the same.

“I was tipsy, and bubbly, and the life of the party,” Drew told Oprah Winfrey in a 1990 interview. “I felt so good. All my problems had seemed to disappear for that hour that I was out of it.”

By the following year, Drew Barrymore was casually drinking. At 10, she took up marijuana, and by 12 she began snorting cocaine. A troubled, dependent child in the spotlight; a world away from the empowered actor/producer/entrepreneur fans know today.

Born February 22, 1975, one of four children to aspiring actor Jaid and film star husband John Barrymore, Drew was among the fourth-generation of Barrymores to take up the craft. Even her godparents were legends of the industry: actor Sophia Loren, Anna Strasberg (wife of acclaimed acting teacher, Lee) and director Steven Spielberg.

By the time Drew Barrymore appeared in E.T. at the age of seven, the highest-grossing film of the ’80s, she was being called the modern-day Shirley Temple. She had the dimples, the confidence, the star quality. And with her famous family, a career in Hollywood seemed inevitable.

Her first role was in a pet food commercial at just 11 months old — a role she landed because she laughed when the starring dog nipped at her during the audition. Her big-screen debut came with a small role in the 1980 movie Altered States, then E.T., Firestarter, which was an adaptation of the Stephen King novel, and Irreconcilable Differences, for which she was nominated for a Golden Globe. (She would ultimately go on to win one 25 years later for Grey Gardens.)

With the fame and the accolades, came a life no other child could live. Industry parties. Bars. Clubs. Drew was handed alcohol whenever her mother wasn't by her side and got drugs where she could.

Speaking to Oprah in that 1990 interview, she spoke of her low-self esteem as a child ("I never looked in the mirror and thought I was beautiful"), of being teased by other children, abandoned by her father who left when she was six months old.

In her 1990 biography, Little Girl Lost, she also claimed John was an alcoholic, violent and physically abusive. Her earliest memory of him was from when she was three; she wrote that he stomped into their kitchen, threw her mother to the ground, threw her against a wall, grabbed a bottled of tequila and left.

She wrote that, as she approached adolescence, drugs — cocaine, specifically — served as "the antidote" to all that pain. She'd sneak out, run away for nights or multi-day benders. Her mother saw the mood swings, the distance, the long sleeps, but nothing more.

"In retrospect, you kick yourself for not noticing," Jaid said in the book. "But you chalk it up to growing pains. You never think, 'My kid is doing drugs.'"

When the truth of the situation became clear, Jaid checked Drew into rehabilitation. She was 12.

When she relapsed at 13, her mother admitted her to a mental health facility.

Speaking about her mother's decision on The Howard Stern Show in February 2021, the 46-year-old said, "She created a monster, and she didn’t know what to do with the monster. This was her last gasp.

"And I was really out of control. And I forgive her for making this choice. She probably felt like she had nowhere to turn."

Drew described the facility as "a full psychiatric ward".

"You couldn’t mess around in there," she said. "If you did, you’d get thrown either in the padded room or get put in stretcher restraints and tied up."

When she emerged a year-and-a-half later, she legally emancipated from her parents.

"Maybe [hospitalisation] was necessary, because I came out of there a more respecting person," she told The Guardian in 2015. "And my parents didn’t teach me that, and life wasn’t teaching me that. I came out in a very different way… but I still was me."

Living alone, she described as strange. "I had no idea how to run an apartment at 14. There was fungus growing everywhere, it was a disaster. It was in a dangerous neighbourhood and I was so scared to sleep. I had bars on the window and alley cats f**king 30 feet away. I was so terrified.”

On top of that, somewhere in the depths of her addiction, Hollywood had fallen out of love with her.

Dating and husbands and daughters.

Drew struggled for work throughout the rest of her teens, but she fought her way back in at 17 via a film called Poison Ivy. The same year — 1992 — she and her then-fiancé, actor Jamie Walters, posed nude for Interview magazine. Jamie was her second engagement - the first was to Leland Hayward in 1990, when she was 16. Both were called off within months.

She then wed Los Angeles bar owner Jeremy Thomas in 1994, but filed for divorce less than two months later. In 1995, came a second nude shoot, this time for Playboy.

Drew later laughed that once the issue hit the stands her godfather, Steven Spielberg, sent her a quilt, along with a note that read "cover up".

That same year she famously climbed on David Letterman's desk during her appearance on his late-night talk show, danced for him and flashed him her breasts — because, well, as she told him, "it was your birthday".

In the late 90s, Drew also dated fellow actor Luke Wilson. While in conversation with Kate Hudson, the 50 First Dates actor admitted they were in an open relationship.

"We were young," she admitted on The Drew Barrymore Show. "It's so fun because when you’re young, you’re like, ‘It’s low-stakes,’ we’re just young, we’re having fun, we’re all playing, acting, hanging out."

Before they parted ways, Drew explained they weren't taking "anything seriously". 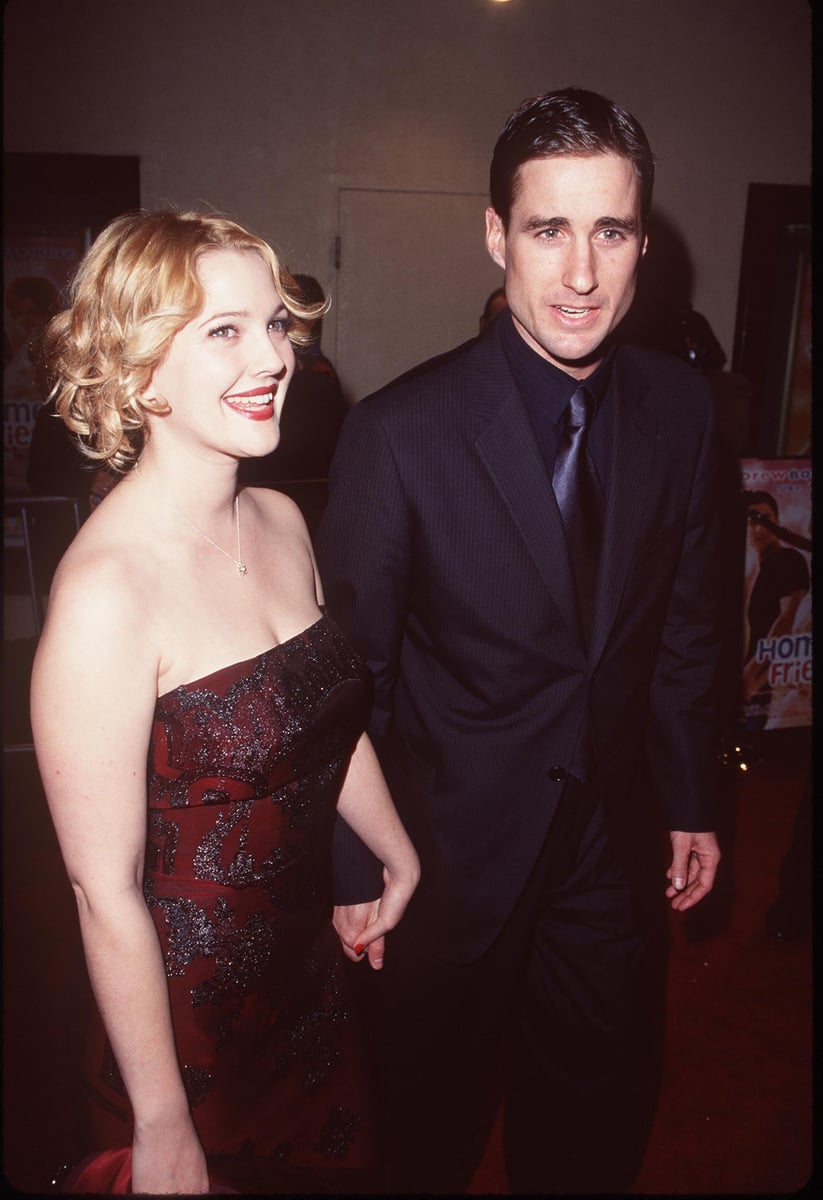 It was in the late '90s that Drew truly fell back in favour with the industry and audiences, thanks to a string of box-office baiting rom-coms: The Wedding Singer, Ever After, Never Been Kissed. It was also when she met her second husband, actor Tom Green, with whom she starred in the 2000 movie Charlie's Angels. They were married for nine months.

She then had a five-year relationship with The Strokes drummer, Fabrizio Moretti, but it was with art consultant Will Kopelman, son of former Chanel CEO Arie, that she found the father of her children. They married in 2012 and that year had their first daughter, Olive, followed two years later by their second child, Frankie.

After they divorced in 2016, Drew described their split as her "biggest failure".

During an appearance on The Ellen DeGeneres Show a year later, she said, "It was just like my worst nightmare... I so wanted to raise kids in this ultra-traditional way and do everything the polar opposite of my experience." In a way it was; she and Will remain co-parents and good friends.

Since becoming a parent, Drew has opened up about her evolving relationship with her own.

On The Howard Stern Show, she said she's reconnected with her mother after a long estrangement: "I'm really glad there is healing there.

"I can't have her feel bad anymore. I'm sure she's already beat the crap out of herself for having a daughter who wouldn't speak to her... I felt so guilty denying my mum access to me. It felt like I was cutting off the source of life.... Definitely the worst pain I've ever known. And I just thought, 'I have to let this go'."

On Father's Day in the US in 2020, she shared an Instagram post in which she wrote that she now loves her dad for who he was and "not for who I wanted him to be".

My mom chose a wild card for my dad. He was a mad poet hedonist man child! But I understood that as a kid. Somehow I have zero baggage or dad issues. I think I would have liked to have a dad who didn’t look so out there. Or who stayed. Or was capable of anything really. But his wildness runs through me. His gifts are here. His demons to overcome are mine to break! I love him not for who I wanted him to be, but for who he was. And as I look at all the photos of dads today, doing their dad job, sure, there is my tiny self that wished for him to fit in. But he never did. And I’m not sure I did either. And I’m not sure what anything is supposed to look like, or what it really is beyond the images?! But I do know this... both my parents have played a major role in who i am as a parent. And none of it looks perfect. But it functions with so much love. And togetherness. And availability. I don’t have a picture of a dad today to show how great everything was. I have a picture to show what it was. And that is my story. And that is perfect in itself. My dad gave me the gift of life! A wicked sense of humor! And that wildness that I truly do cherish.

"Both my parents have played a major role in who I am as a parent. And none of it looks perfect. But it functions with so much love. And togetherness. And availability.

"My dad gave me the gift of life! A wicked sense of humour! And that wildness that I truly do cherish."

Somewhere in the middle of it all, Drew became one of the first women in Hollywood to found their own production company, Flower Productions, which she did at the age of 20 alongside producer Nancy Juvonen (we have that to thank for Never Been Kissed and her 2009 directorial debut Whip It).

Under the 'Flower' banner she's since launched a beauty company called.... well, Flower Beauty. The range, a selection of which became available in Australia in January 2019, includes makeup and cosmetics.

Meanwhile, she also was the lead in Netflix horror/comedy Santa Clarita Diet, in which she plays a real estate agent and mum who becomes a zombie and starts craving human flesh. A show that's been both popular and critically praised.

Despite all her success, it's little wonder Drew doesn't want her daughters to become child actors. But she won't shield them from what it meant for her; from the addiction, or the pain, or trauma.

"I’m not going to pretend I am not who I am," she told The Guardian. "I’m going to show them how it got me to where I am now.”