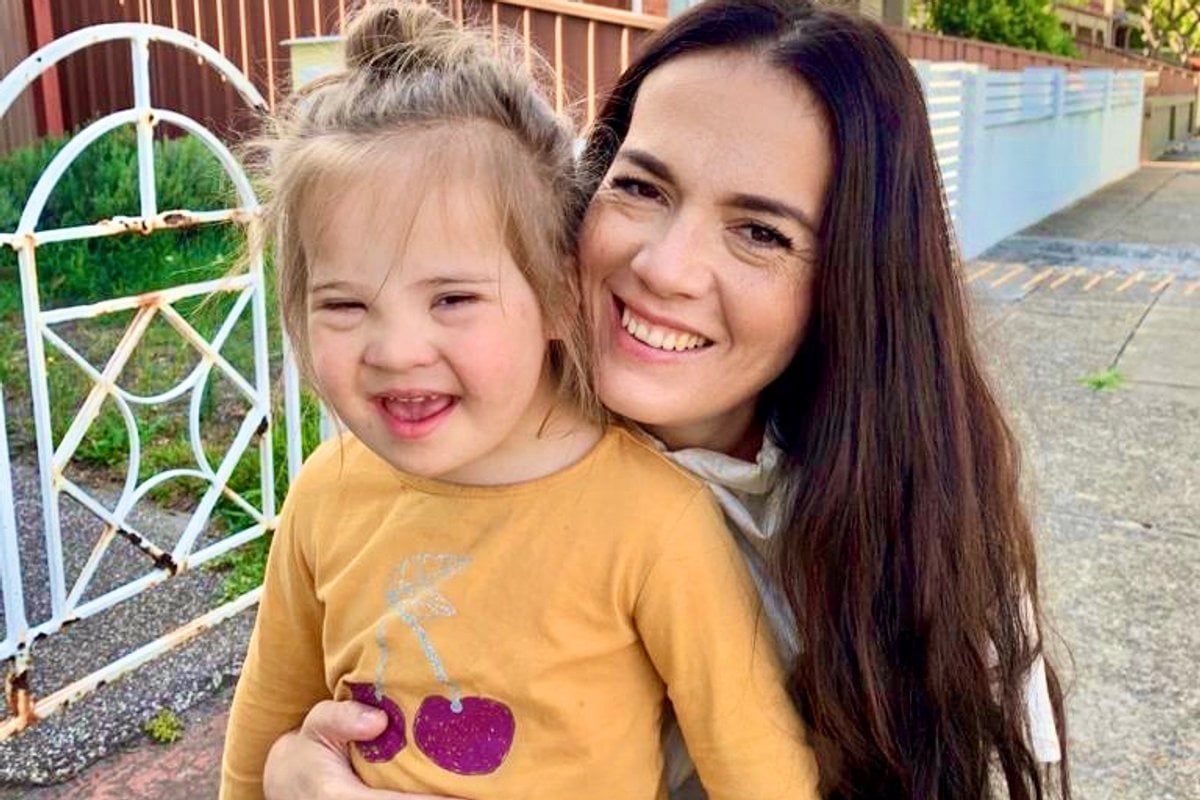 This week we meet Natasha, mum to son Dashiell and daughters Raven and Juniper. Natasha’s story focuses on the birth of baby Raven and the journey with her diagnosis.

At 40-weeks pregnant, Natasha hoped that her acupuncturist might work some magic to bring on the birth of her second baby.

“My stomach was enormous this time too, so I was doing everything I could, like acupuncture, to ensure I didn’t go over 40-weeks again!”

As luck would have it, she felt an intense contraction whilst receiving her treatment and she excitedly called husband Shannon to tell him she thought it was time.

Watch the trailer for Mamamia's birthing podcast, The Delivery Room. Post continues below.

While Natasha’s pregnancy and birth with Dashiell was smooth sailing, she had a sense that things were very different this time around.

“In utero Dash moved around my tummy slowly and when he came out, I transitioned to new motherhood with relative ease.

“He was a calm baby and I remember people telling me how hard new mum-life would be and it just wasn’t. This was why it felt so easy to go back for baby number two, I had no reason to think anything would go wrong.”

After the contraction at the acupuncturist’s clinic, Natasha returned home to Sydney's beachside suburb of Coogee and began labouring.

At 9pm her waters broke and at 5am the following morning, the couple made their way to The Royal Hospital for Women in Randwick.

“By this time, I was in such rip-roaring pain I was gripping the sides of my wheelchair – it was nothing like my first birth at all.

“I have a relatively high level of pain tolerance, and yet I was screaming uncontrollably like a bad stereotype of a woman in birth from an 80s movie. It was incredibly intense.”

“My chosen midwife was unfortunately on leave and so when the duty midwife checked me over, she realised my baby was in the breech position. By this stage I was getting contractions every two minutes.”

It was just after 6am when the doctor arrived fresh from his cycle to work, dressed in lycra.

“I remember thinking that the midwives were very pleased this particular doctor had arrived as his speciality was breech births. He checked the baby’s position and said I only had a couple of options as I was so far along – an emergency c-section or to try to deliver naturally.

“I begged for an epidural and he told me that in this instance I would be better off having the ‘use of my legs’ to get my baby out safely. I was in so much pain that I had this awful image in my mind of being mauled by wolves.”

Natasha knew that she was already in the transition phase and that her baby was crowning.

Her clothes were removed and she was put onto a special birthing stool to try and get her in the right position. Word had spread that she was delivering a breech baby and the room began filling up with medical staff.

“Shannon was sitting behind me completely terrified as I was screaming and begging for help, but no one touched me. They just watched as I pushed my baby out, bottom first.

“When her shoulder became stuck, someone reached down to pull her free and then they handed her up to me. But I was still screaming, I could barely even look at her.”

Shannon took a photo to announce baby Raven’s arrival to friends and family but whispered to Natasha that he thought something was strange.

“As Raven was whisked away for checks with a paediatrician, Shannon was worried. At that point I was distracted - inhaling gas as they pushed on my tummy to remove blood clots. I had lost a lot of blood and needed stitching up, so I was still in a lot of pain.

“But as time went by, we began to feel very anxious because no one was telling us anything about what was happening with our daughter.”

When the paediatrician finally came to sit with the couple, he delivered a sentence that no new parent ever wants to hear.

“He sat down beside us and said, ‘I’ve got some bad news, I’m quite sure that your daughter has Down syndrome.’ I cried immediately as I was so shocked and confused by all the competing emotions.

“Everything that her diagnosis meant for our family... and my feelings about being thrust into the world of additional needs. I felt so lonely and I knew there was so much to learn.”

Reflecting on that moment later, Natasha felt the news of Raven’s diagnosis should have been delivered differently.

“No parent ever wants to consider their beautiful new baby as ‘bad news’. The paediatrician was excellent and very supportive towards us, but I think he could have just said ‘news’, or ‘we have some information you’ll need time to adjust to’. The idea that Down syndrome was considered ‘bad news’ really bothers me.”

Within 24 hours there was more shock for the couple, as they were told Raven needed open heart surgery.

She was taken from them and placed into NICU and the next few days and weeks went by in a blur.

Fortunately, Raven did not need heart surgery on this occasion and after nearly a month, Natasha and Shannon were allowed to take her home.

“The fear of Raven going into heart failure was so frightening, and before we left hospital we were trained on how to resuscitate her, using a lifelike dummy.

“We were also told she would need to sleep next to us at home and that we should keep the room well ventilated and the light on. She had a feeding tube inserted; there was so much to take in.”

While Shannon and Natasha were petrified their daughter would go into heart failure, her physical condition improved and Raven thrived at home in their loving care.

Raven eventually had her heart surgery at age three and she is now a healthy and happy five-year-old.

Shannon and Natasha have since had another daughter, Juniper, in 2019.

“Raven is a real force of life and I wouldn’t want to change her, but it has taken me a long time to adjust to life as her mum.

“In Sydney I found it hard to make connections within support groups [for parents of children with Down syndrome]. I would drive away from meetings in floods of tears. I could see the experiences and struggles on the faces of the other women.

“At times I felt incredibly isolated. I needed a mentor or role model who was a few years ahead of me to aspire to, and thankfully I met an amazing woman and her beautiful daughter who I became close to.

“I wanted to know it was possible to bravely step forward with your life and speak about being a parent to a child with additional needs, as just one part of who you are.” 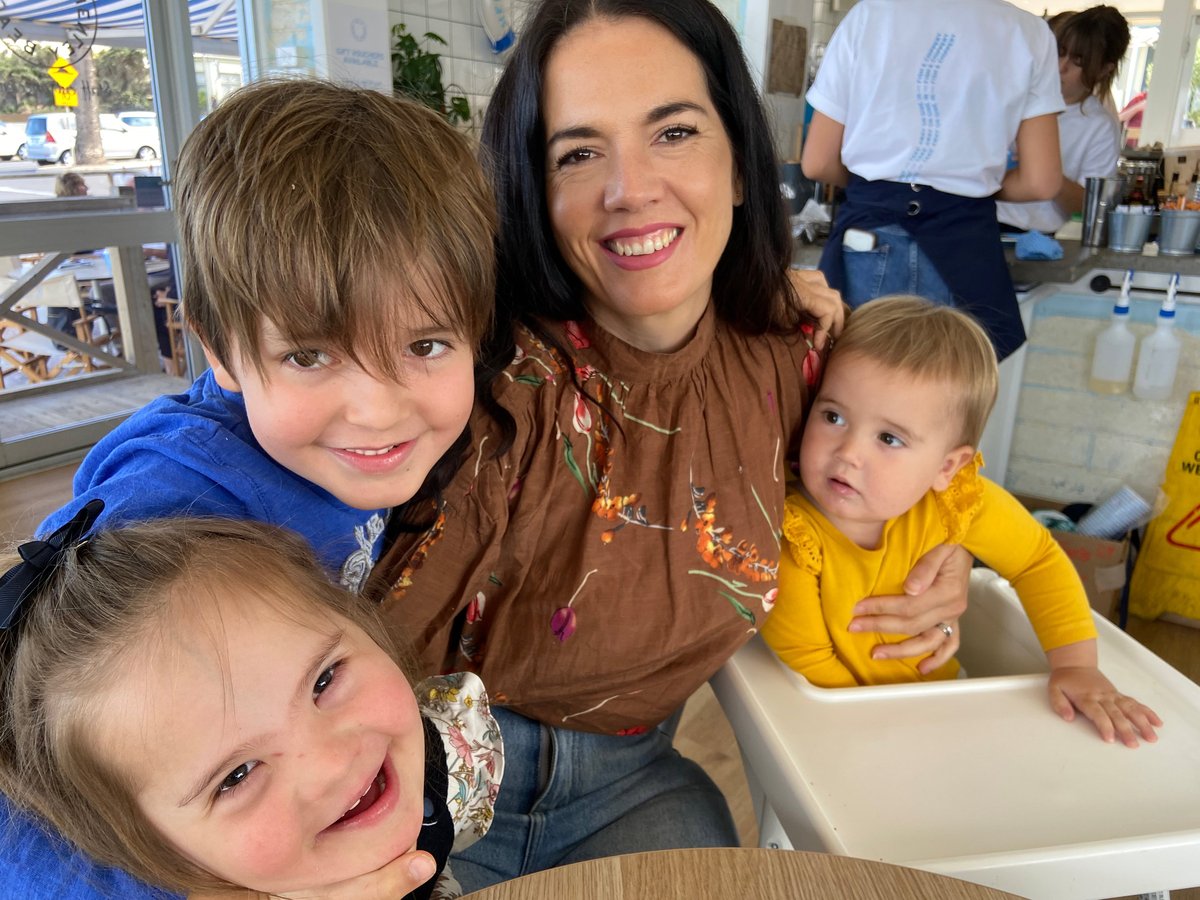 In January 2021, the family moved to Adelaide for a fresh start.

"It has been an emotional rollercoaster," Natasha said.

“In Adelaide we have found a wonderful and supportive community for Raven and I no longer drive away from meetings feeling sad...

“The last few years have taught me a lot and I have gained so much respect for parents of children with additional needs. My eyes and my heart have been opened. Raven brings so much love and joy to our family."

Reply
Upvote
I’m sure your daughter will have a lovely life with you as her mum, she definitely made a good choice.
B
beachhouse84 9 months ago