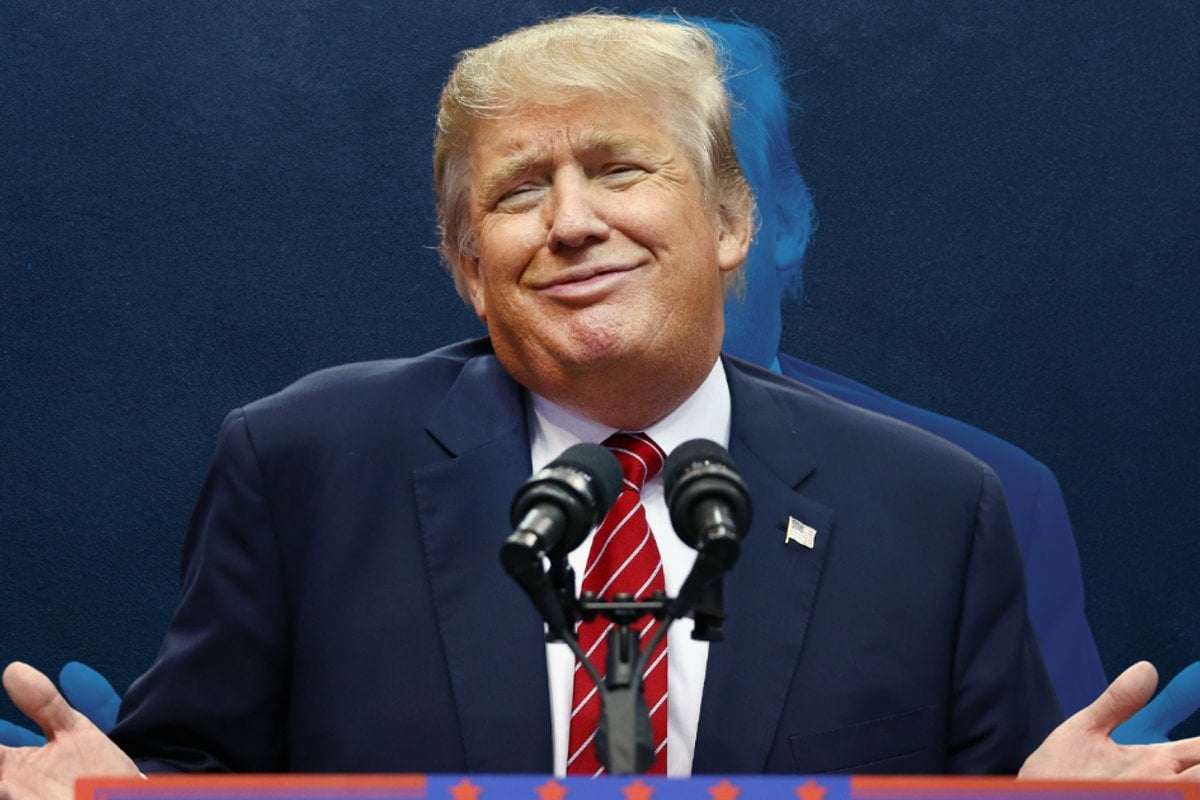 IT'S THE SINGLE MOST IMPORTANT TELEVISION FINALE POLITICAL EVENT OF THE YEAR.

The polls have closed. Thousands of shops have been boarded up. And America *checks notes*... isn't great again.

Goodness. We really hope that supporting actor from Home Alone 2 doesn't get recast.

No one can handle another four years of this sh*t. No one. 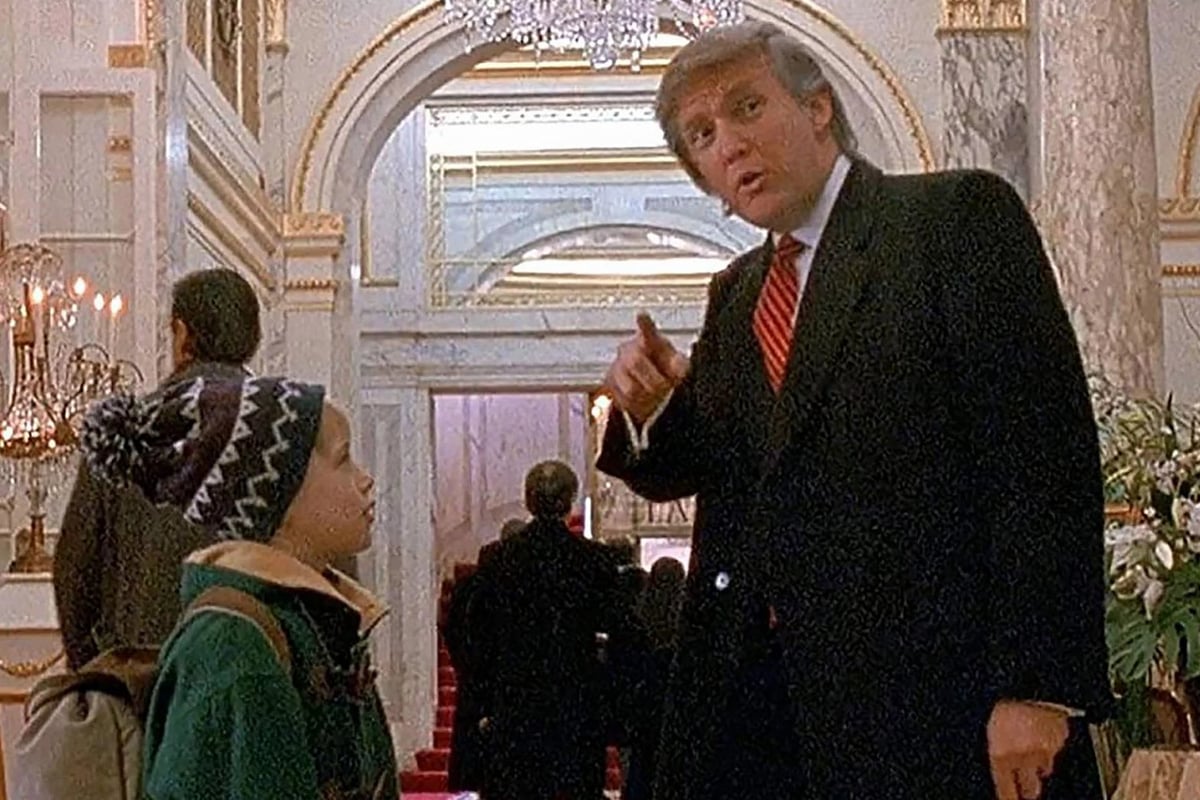 HOW DID THIS MAN BECOME THE PRESIDENT OF THE UNITED STATES? HOW?

It all began four years ago when the host of The Apprentice – yes, a god damn reality TV star – was elected President of the United States.

Yes, the polls were wrong. And for everyone, including Trump himself, it was a huge surprise.

Hillary Clinton's supporters were seen clutching each other and crying in the streets. But no one was crying as hard as the journalists who had already prepared countless articles celebrating Clinton's win.

The presidency officially began with Trump's inauguration... which precisely no one attended.

Despite the clear photographic evidence, Trump insisted that "a million and a half" people attended and sweetie, no. 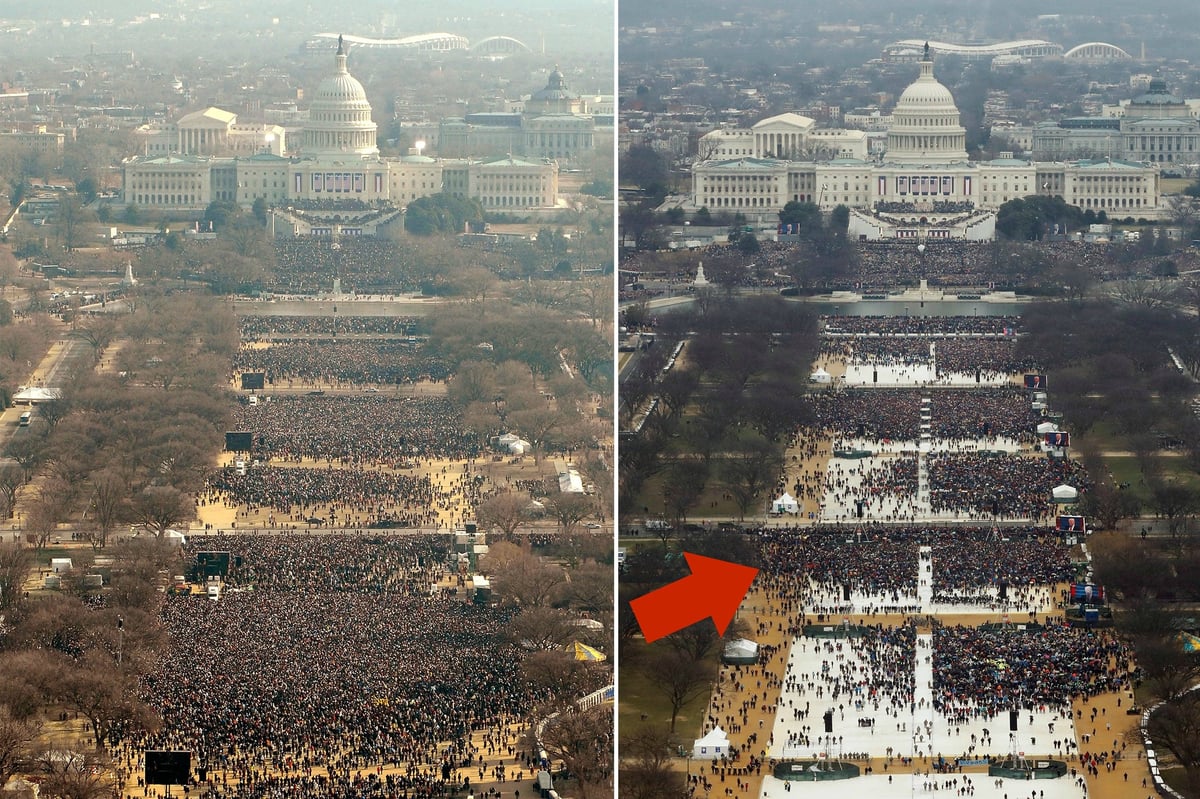 Let's be honest, there was no incentive to attend. Trump forced his supporters to listen to 3 Doors Down and Toby Keith. OBAMA HAD BEYONCE.

NO ONE WANTS 3 DOORS DOWN. COME ON.

Melania Trump is all of us being forced to watch 3 Doors Down perform. pic.twitter.com/sH8jWZvR4o

He also shared a photo of himself working on his inaugural address... on a blank piece of paper... with a closed sharpie pen.

Afterwards, Barron and Melania refused to move to Washington for no reason other than the fact that Trump was there... which was fair enough honestly. ¯\_(ツ)_/¯

Overall, the first few months of Trump's presidency were a lot.

He introduced a ban on people from seven Muslim-majority nations, fired a barrage of missiles into Syria, and fired FBI director James Comey.

He also met with the Pope... who wasn't fkn impressed, thank you very much.

Then, in August, he did the unthinkable.

Yes, the President of the United States really did look into the sky during a solar eclipse.

DON'T LOOK AT THE SUN DURING A SOLAR ECLIPSE.

AND YET HE FKN DID IT. 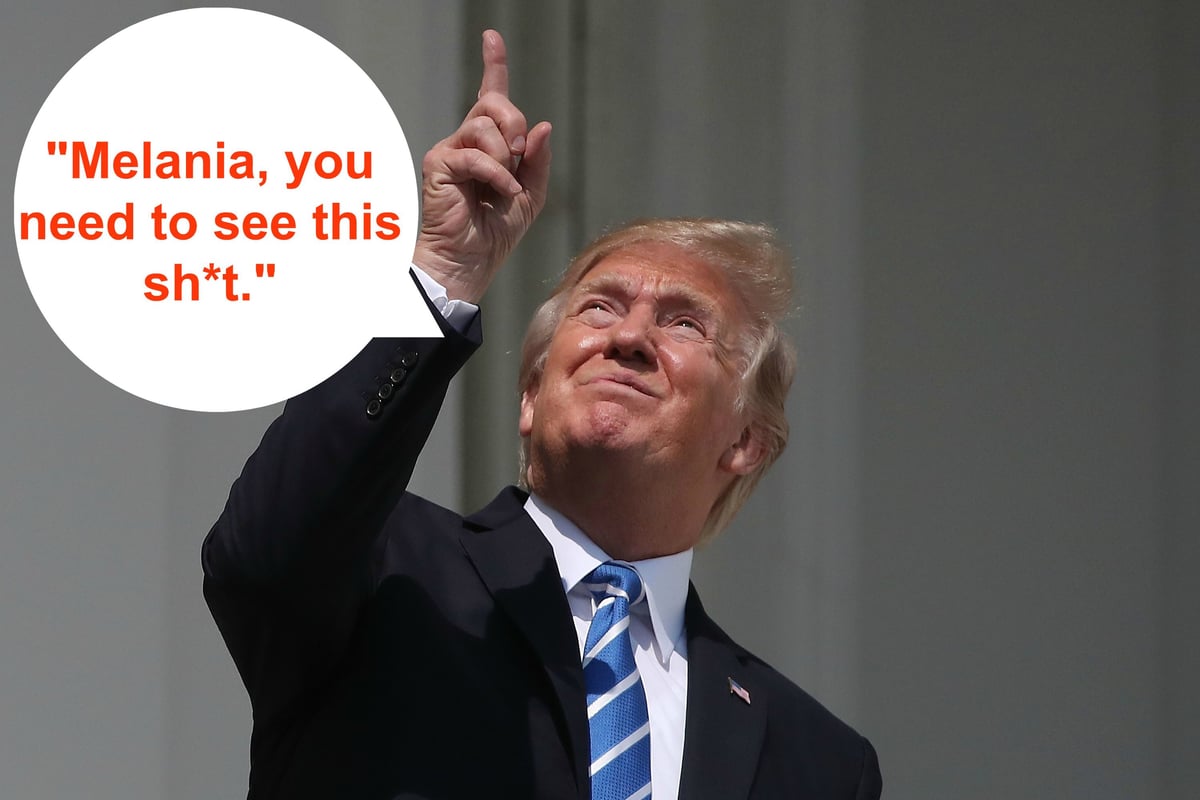 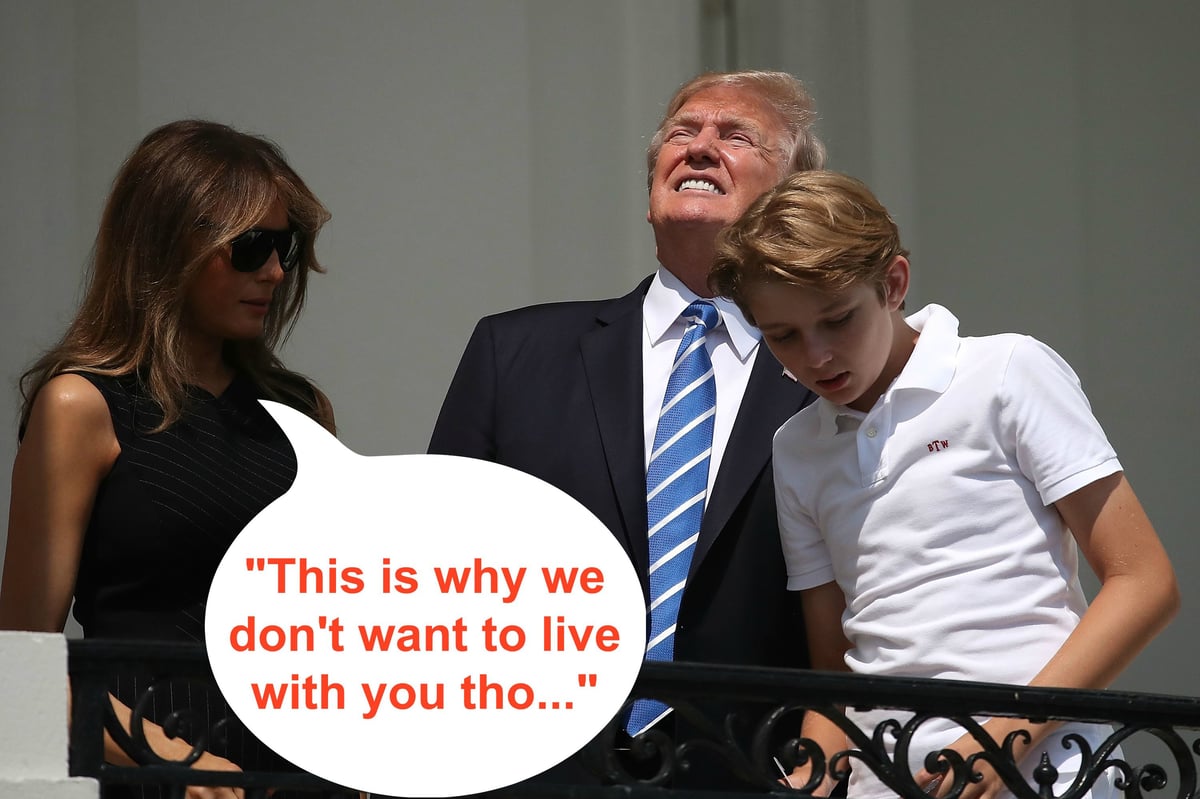 That same month, hundreds of alt-right supporters with torches marched through Charlottesville shouting "unite the right" in a protest which left one person dead.

In the days after the violent far-right rally, the President retweeted a cartoon of a train hitting a CNN reporter. "Fake News can't stop the Trump Train," the cartoon read.

He then accused people of "trying to take away our culture" following calls to remove Confederate statues.

"Why would Kim Jong-un insult me by calling me 'old,' when I would NEVER call him 'short and fat?' Oh well, I try so hard to be his friend – and maybe someday that will happen!" he tweeted, before declaring that he had a "nuclear button" that was "bigger and more powerful" than Kim Jong-un's button.

Spoiler Alert: The pair now have a "deep and special friendship". Whatever that means. ¯\_(ツ)_/¯

Meanwhile, Trump copped a lot of criticism for failing to give a f*ck on multiple occasions, including:

A) When he threw rolls of paper towel to a crowd of relief workers after Hurricane Maria hit Puerto Rico.

You all remember when #trump threw paper towel at Puerto Ricans? Ah, those were the innocent times. #COVID19 #COVID pic.twitter.com/hpcxNtKh0g

B) When he endorsed arming teachers with firearms after a deadly shooting at a Florida high school. 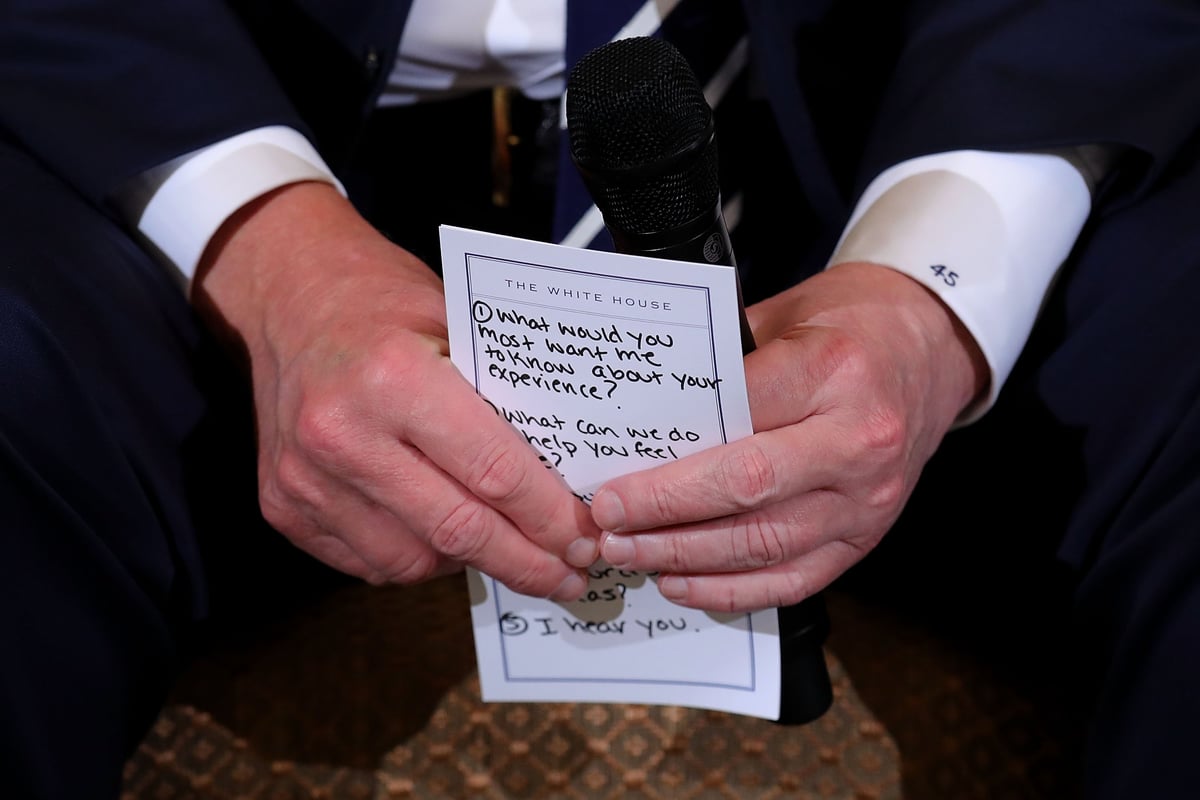 C) When Melania visited a facility holding migrant youth separated from their parents while wearing a jacket that said: "I don't really care, do u?" 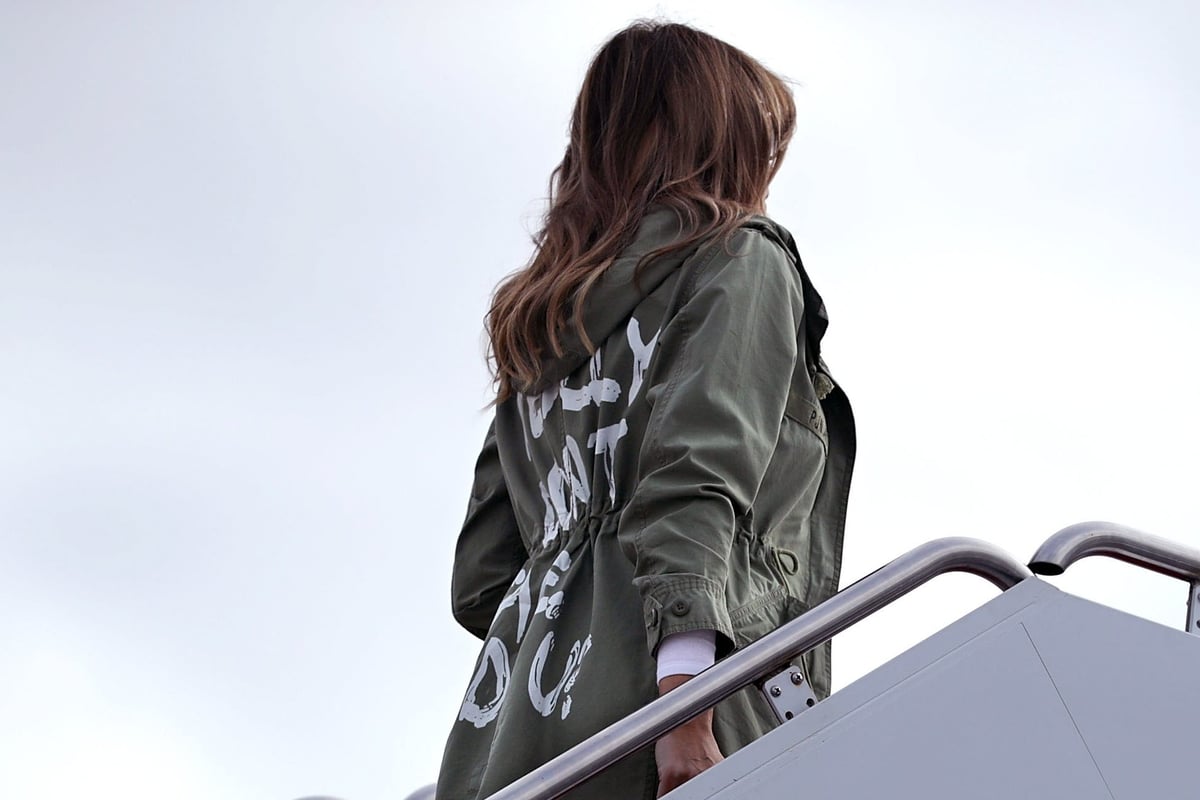 Yes, even fellow reality TV stars Kim Kardashian and Kanye West met with the President in the Oval Office.

"He can speak for me anytime he wants," Trump said of West. 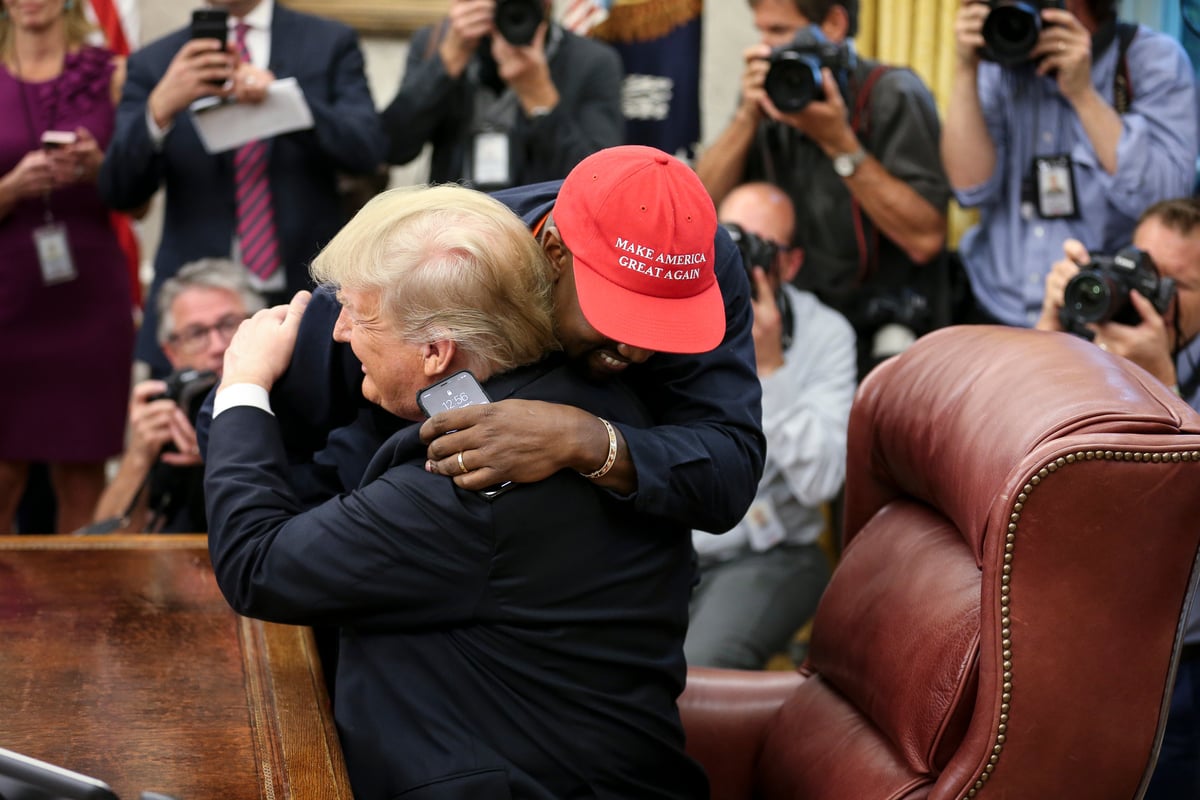 This is... totally normal.

He also met the Queen for the first time as a President and broke precisely every single rule in the royal protocol handbook.

HE EVEN WALKED IN FRONT OF THE QUEEN, GOD DAMMIT.

With this oaf visiting, it's lucky that, according to the rules, the queen can move on a diagonal. #TrumpVisitUK #chess pic.twitter.com/ijHeJ3iJHW

In late 2018, the United States federal government was shutdown due to Trump's outlandish demand for federal funds for a US-Mexico border wall.

He later threatened to continue the shutdown, which was the longest in US history, until he got the money for his wall.

The next year, Trump made a fool of himself in Britain... again.

He labelled Meghan Markle "nasty" before later denying it, fist-pumped the Queen, and appeared to fall asleep during the Queen's address.

The trip was always going to be, well, a colourful one.

In response to his presence, Brits unleashed a giant inflatable Trump Baby, protested outside Buckingham Palace, and even carved a giant d*ck in a field next to the airport where Trump landed.

Guess who's been busy today mowing a stiff message for Trump under the Stansted flightpath... Please share and let's see how far we can spread the welcome!#climatechange #Trump #welcometrump pic.twitter.com/crnZo5rnDv

At the beginning of 2020, Trump launched the first new US military service in more than 70 years – Space Force.

He also triggered a slew of World War III memes after literally pushing the US and Iran to the brink of war.

Or as Trump likes to call it: THE CHIIIIINA VIRUS.

In the early days, Trump continued to claim that coronavirus was "vErY uNdEr CoNtrOl In OuR cOuNtRy".

"It's going to disappear. One day, it's like a miracle, it will disappear," he said during one meeting, and SIR THAT'S NOT HOW IT WORKS.

He repeatedly claimed that the virus would simply "go away", while ignoring advice from scientists.

When the CDC advised that the public should wear face masks, Trump shared that he wouldn't be doing so.

Yes, the President of the United States turned wearing a face mask in a global pandemic into a political issue. A POLITICAL ISSUE.

He also suggested that injecting disinfect could kill the virus, which seems like terrible advice, but okay.

"I see the disinfectant that knocks it out in a minute, one minute," he said in a White House press briefing.

"And is there a way we can do something like that by injection inside, or almost a cleaning? Because you see it gets inside the lungs and it does a tremendous number on the lungs, so it would be interesting to check that," he added.

As for the astronomical deaths in the country, Trump's response was: "It is what it is."

"They are dying. That's true. And you – it is what it is," he told journalist Jonathan Swan. 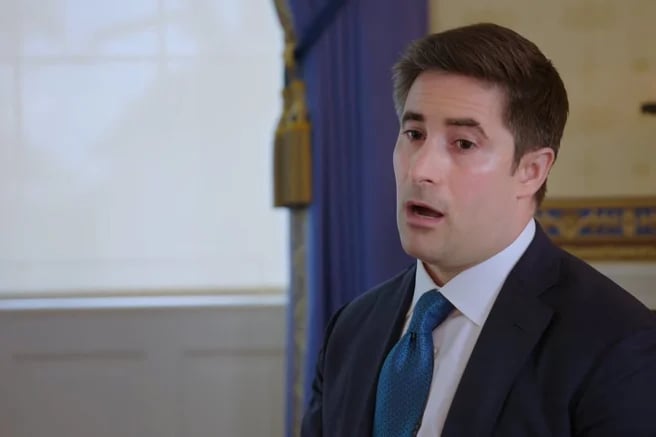 While COVID-19 swept through the United States, protests following the death of George Floyd raged on across the country.

Amid the protests, authorities used tear gas and rubber bullets on peaceful protestors in Washington to allow Trump to hold up a Bible for a photo opportunity.

FOR. A. PHOTO. OPPORTUNITY.

Earlier that day, Trump had made a national address in which he declared: "I am your president of law and order." 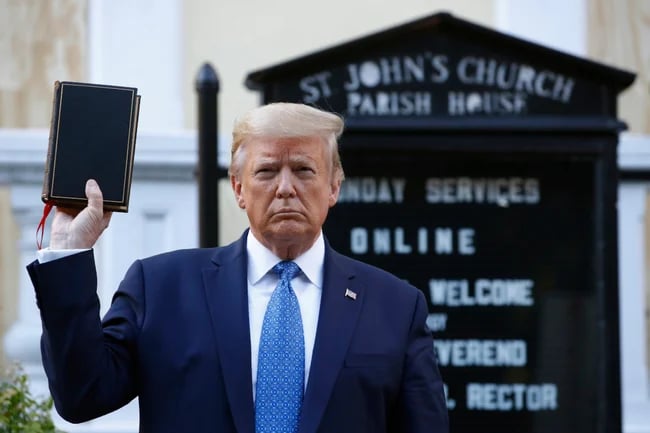 Despite her final wish to not be replaced until a new President is installed, Trump nominated Judge Amy Coney Barrett to replace her.

It was likely at a ceremony for Barrett's nomination that the White House literally became a COVID-19 hotspot.

Then, Donald and Melania Trump's diagnosis was announced.

After being transported to Walter Reed National Military Medical Center, he left the hospital – WHILE FKN INFECTIOUS – to wave at his supporters waiting outside.

He also went on a potentially drug-induced tweeting spree from hospital.

Since leaving hospital – and dramatically ripping his mask off at the White House – Trump has described his COVID-19 illness as "a blessing from God".

He's also been back on the campaign trail with a woman who simply cannot be Melania Trump.

Seriously, who the f*ck is this? 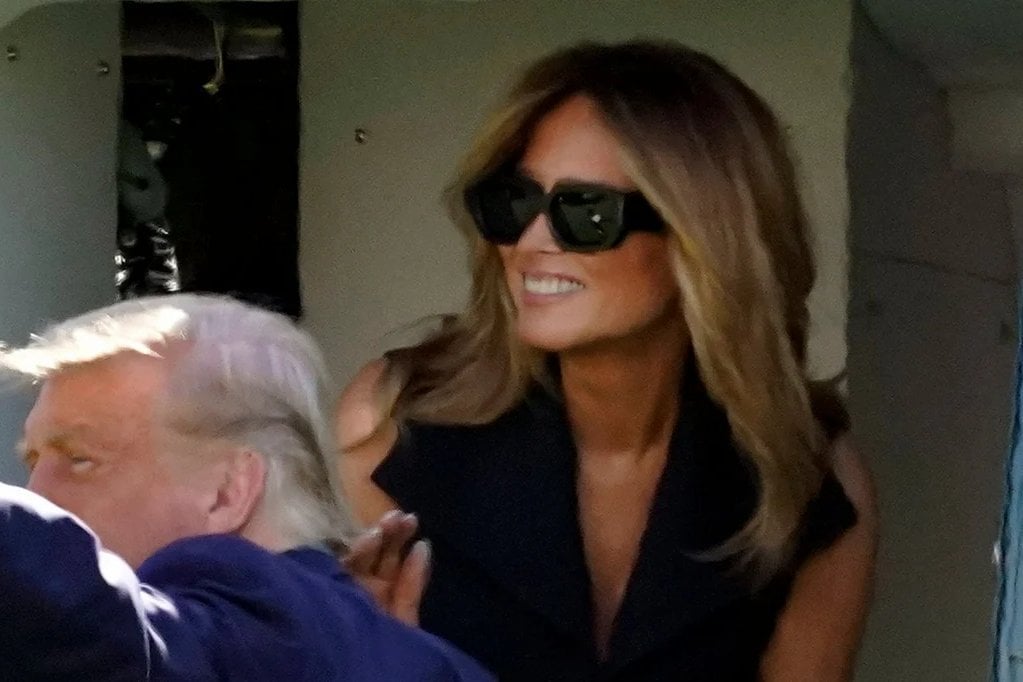 Now, as the votes are counted, there's only one thing left to do.

Reply
Upvote
3 upvotes
Looks like Trumps going to win again. What a relief.
L
laura__palmer a year ago

Reply
Upvote
2 upvotes
@fightofyourlife all his chickens died. That's why you shouldn't count them before they hatch
C
cat a year ago