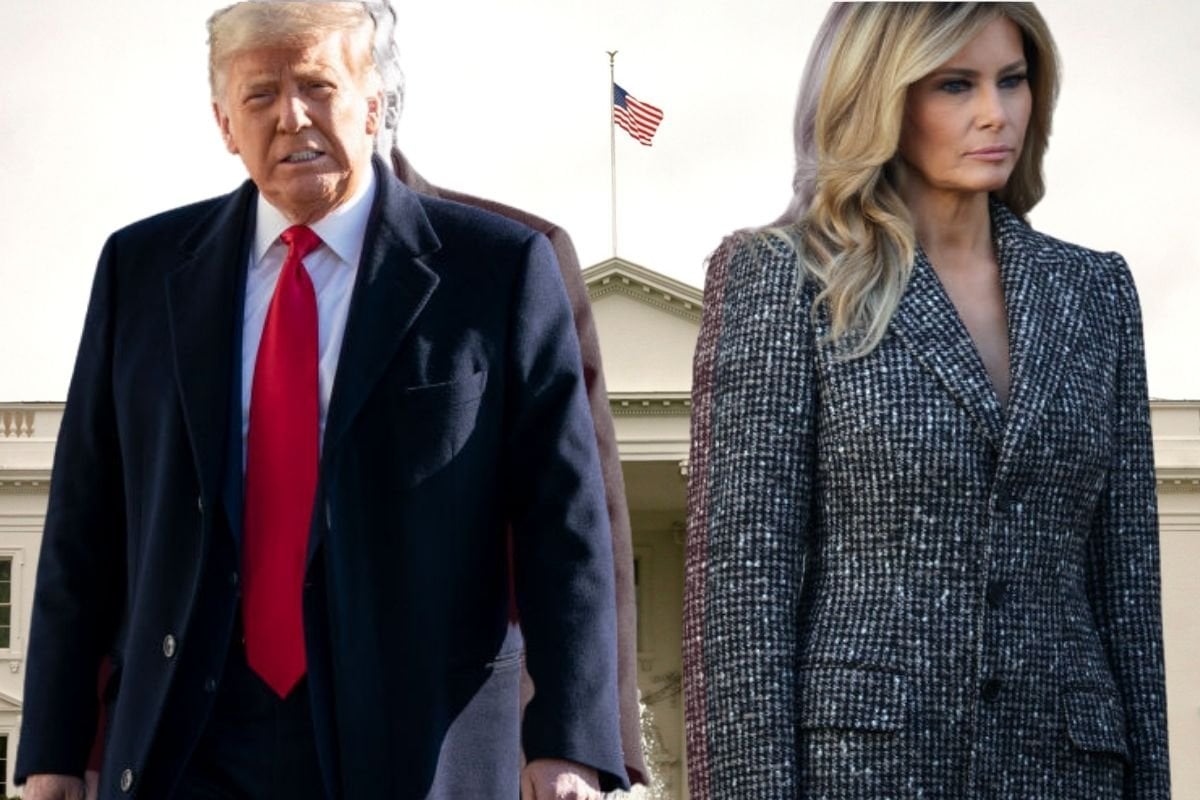 I feel two things at the one time. The first is anger. Specifically towards Sleepy Joe and his stupid face. The second is joy because not being president means I can now play golf seven days a week instead of six.

People seem to be interested in how I'm spending this last day, even though I made it pretty clear in my schedule. I wrote in big writing that I was working 'from early in the morning until late in the evening' and was making 'many calls and having many meetings', so why the questions??

Anyway, I thought I’d write down what my last day as president looked like because it’s very funny but also very important. I would say it’s actually the most funny final day of being president ever. Melania didn’t laugh but I think that might be because she doesn't want to be married anymore.

But enough about Melania. Today was about me and the end of my presidenting. Here's how it went.

The first thing I did was wake up and do a wee. I did a little bit of wee on the toilet seat and also on the floor so it would be sticky for Joe. I woke up Baron to show him but he just muttered, 'dad, no,' and he can't tell me what to do.

Then I made my way to my computer. A president is very busy and important, you see.

I went to www.google.com and typed in the search phrase 'what did lil wayne do and should i pardon him y/n'. I decided... yes.

I briefly looked through my other list of people to pardon, and knew there was someone else I had meant to add, but couldn't remember his name.

Next, it was time to check my emails. I realised I hadn't turned my Out Of Office off so it had been on for like six months lol. Whoops. Anyway. I signed the POTUS (Mike Pence tells me that means 'president') email address up to lots of spam which is objectively a very funny thing to do. I also changed the email signature to President Of The United Butthole, and hopefully Joe won't notice. I laughed so hard I choked and then my security adviser said maybe I should get a COVID test. But 1. I'm immune, and 2. I had more work to do.

This is how much work. Roughly.

After that I changed the computer password from 'President123' to 'sleepyjoeSux1' (you needed a number and a capital letter). Then I went onto this weird website called 'Wish' and ordered a number of items to the White House. I bought a face mask for a cat, waterproof bed sheets, underpants where your willy looks like a shark fin and a balloon that says 'old as f**k' on it. They're due to arrive next week so when they come EVERYONE is going to think Joe ordered them!! So embarrassing.

Even though it had already been a busy day, the next thing on my agenda was to do my farewell speech. It was pre-recorded, you see, on account of me not being legally or ethically allowed to speak live, ever since I incited violence (allegedly).

It took me 27 times to get it right, because the version my press secretary approved didn't really sound that good. Luckily I made some changes, adding things like the time I built the greatest economy in the history of the world. And also the time I made two vaccines in less than one year, when it would've taken another president 10 years! At the end, everyone in the room was looking at me like this:

I think because they couldn't believe how good it was.

I went to write a tweet about all my achievements, but then remembered I got banned from Twitter. I can't tell you how many excellent thoughts I've had that I haven't been able to share! That's why I started this diary, so at least I can put my clever words somewhere.

While everyone else was clearing out their desks, I got bored and found a Sharpie. I had such a good idea to write 'Trump wuz here' on everything I could find including on all the forks in the kitchen. I drew really ugly moustaches on all the portraits of past presidents, and on one (can't remember who) I drew a big willy coming out of his face. Baron said something that sounded a lot like 'that's really immature, Dad' but I think I must've misheard him.

I remembered that somewhere in my desk draw was a post-it note with the nuclear codes written on it. At least, I thought it was in my desk draw. Eventually, I found the post-it on the back of my office door (oops!), and decided I'd hide it somewhere really annoying so Joe wouldn't be able to find it.

I put the post-it note in Melania's terrifying rose garden (I think we can admit now that decorating isn't her strong suit), but then later decided I wanted to copy them in case I ever needed them to blow up the world or something. But I'd hid them so well that I couldn't find them!! Dammit! 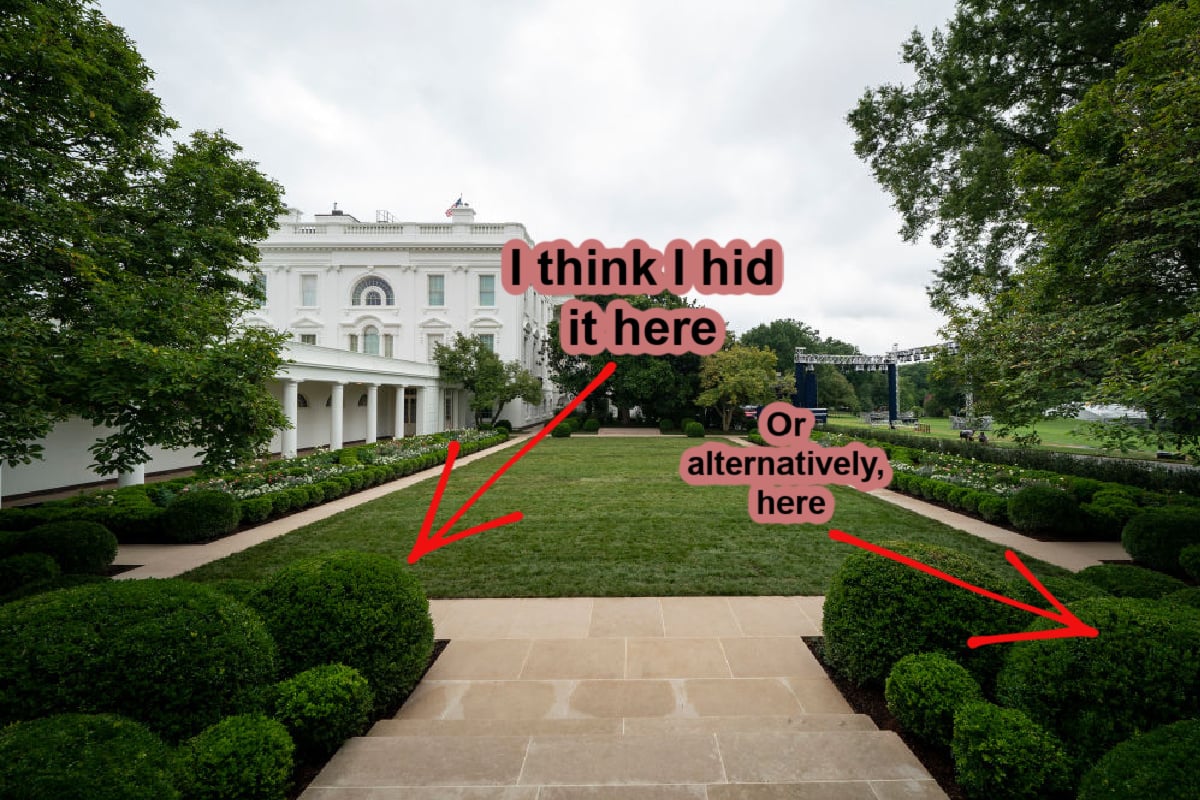 Still, there was more work.

I went into the lounge room and took the batteries out of the remote. Then, I put some fish in the air-conditioning vent. I went to the kitchen and took all the coffee/tea/milk/butter etc. so there were no essentials when Joe got here. I threw out all the books I could find and replaced them with The Art Of The Deal which is a book by me. I went to my bedside drawer and found all the letters I'd written to Melania asking why she doesn't speak to me/why she sends strange lookalikes to replace her at public events, and shredded them so that Joe would never know. I left a note on the chair in the Oval Office that said 'only stupid ppl sit here' with an arrow and then took off all the temporary hooks around the place and made sure some plaster came off with it so the walls were a bit mangled.

By this time it was like four o'clock and I wanted to rest. I laid in bed with my official work laptop and opened The Sims, where I made a house for Joe and then made him swim in the pool and then deleted the pool ladder so he couldn't get out! Then I made him do "woo woo" with Kamala Harris and it was really funny.

Finally, I remembered who it was that I wanted to pardon earlier. Joe Exotic! From Tiger King. But it turned out it was too late, I missed the deadline. I don't think Joe is taking it too well.

And so, my last day of doing president came to an end. It was probably the busiest day I've had of presidenting!

I didn't want to tell anyone, but doing president can be quite stressful. Sometimes people cry and even do a yell. They also make it sound like a virus that came from overseas is MY problem? And then when I make a very funny joke and call it Kung Flu, people don't laugh very much?

Anyway, I don't have to worry anymore. The last thing I have to do this evening is top up my fake tan, which I intend to do in the very white bathroom, so the residue ruins the tiles. I think I'll also sit on the toilet and leave a bum print of tan, and open every door in the whole White House with my wet, orange hand. Yes, that's a tremendous idea!

Reply
Upvote
1 upvotes
Ha. "I did a little bit of wee on the toilet seat and also on the floor so it would be sticky for Joe."
I heard the WH is getting an intensive clean, everyone thinks it's for COVID, but, in reality,  orange foundation is a one helluva stubborn stain.
Anyone else wish we could have cracked Trump's Twitter back open just for the day, if only to watch him absolutely lose his shit?
cat a month ago