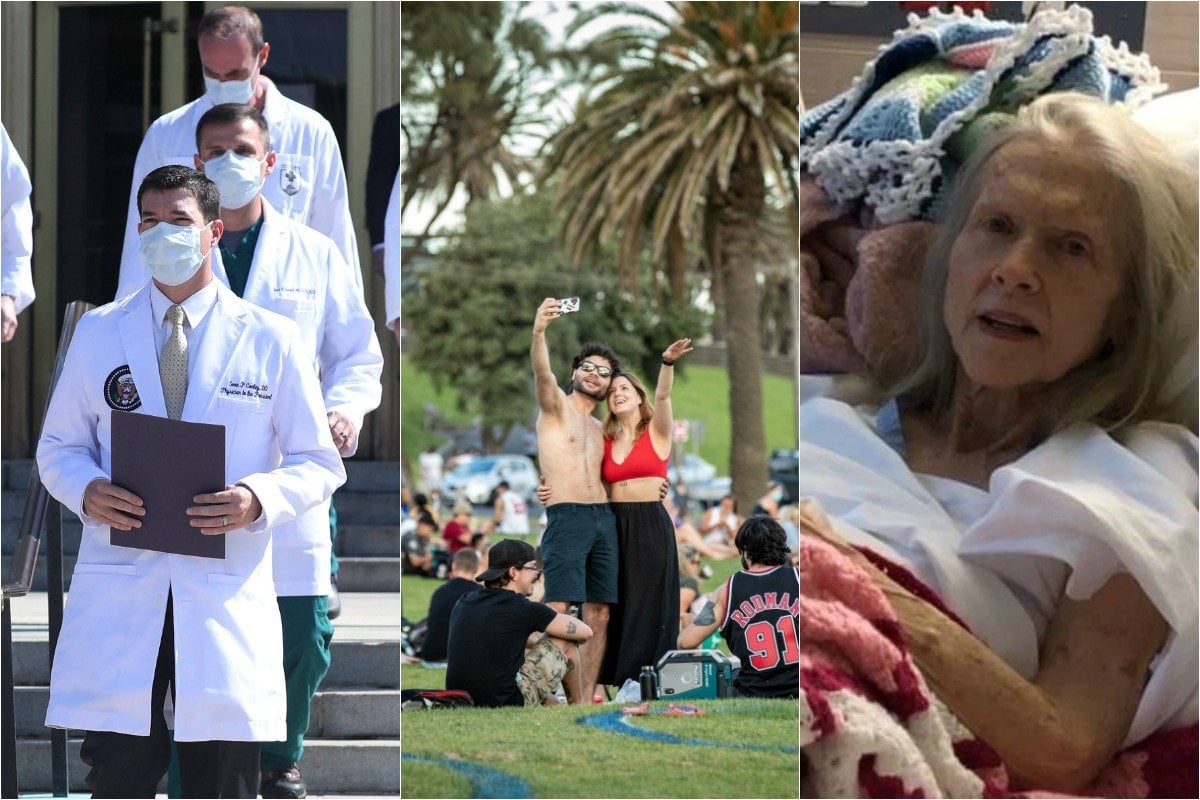 Donald Trump has made a brief trip in a black SUV to wave to his supporters outside Walter Reed National Military Medical Center.

In a video uploaded to Twitter before the trip, he said he was going to "make a little surprise visit."

He also said he "finally understood the virus" telling the camera in a short video update: "I learned a lot about COVID. I learned it by really going to school. This isn’t a ‘let’s read the book’ school. And I get it and I understand it. And it is a very interesting thing. I am going to be letting you know about it."

The White House has confirmed he has now returned to hospital after the short visit.

Trump's condition worse than he let on as 200 possible contacts identified.

US President Donald Trump's condition is improving as he is being treated for COVID-19 at a military hospital and he could return to the White House as early as Monday, doctors say.

That's despite claims from the White House chief of staff that Trump's condition on Friday was far worse than officials made public at the time, with the president's blood oxygen levels dropping rapidly with the development of a fever.

Doctors have confirmed they provided Trump supplemental oxygen twice during his battle with the condition, on Thursday and Friday.

They have also given him dexamethasone, which has been shown in studies to improve survival for patients hospitalised with critical COVID-19 who need extra oxygen.

I really appreciate all of the fans and supporters outside of the hospital. The fact is, they really love our Country and are seeing how we are MAKING IT GREATER THAN EVER BEFORE!

But it should not be given in mild cases since it can limit the body's own ability to combat the virus, according to guidelines from the Infectious Disease Society of America.

Doctors said Trump has not run a fever since Friday and that his liver and kidney function remained normal after the second dose in a five-day course of Remdesivir. The intravenous antiviral drug has been shown to shorten hospital stays.

A White House team of doctors said on Saturday morning Trump's condition was improving and that he was already talking about returning to the White House. 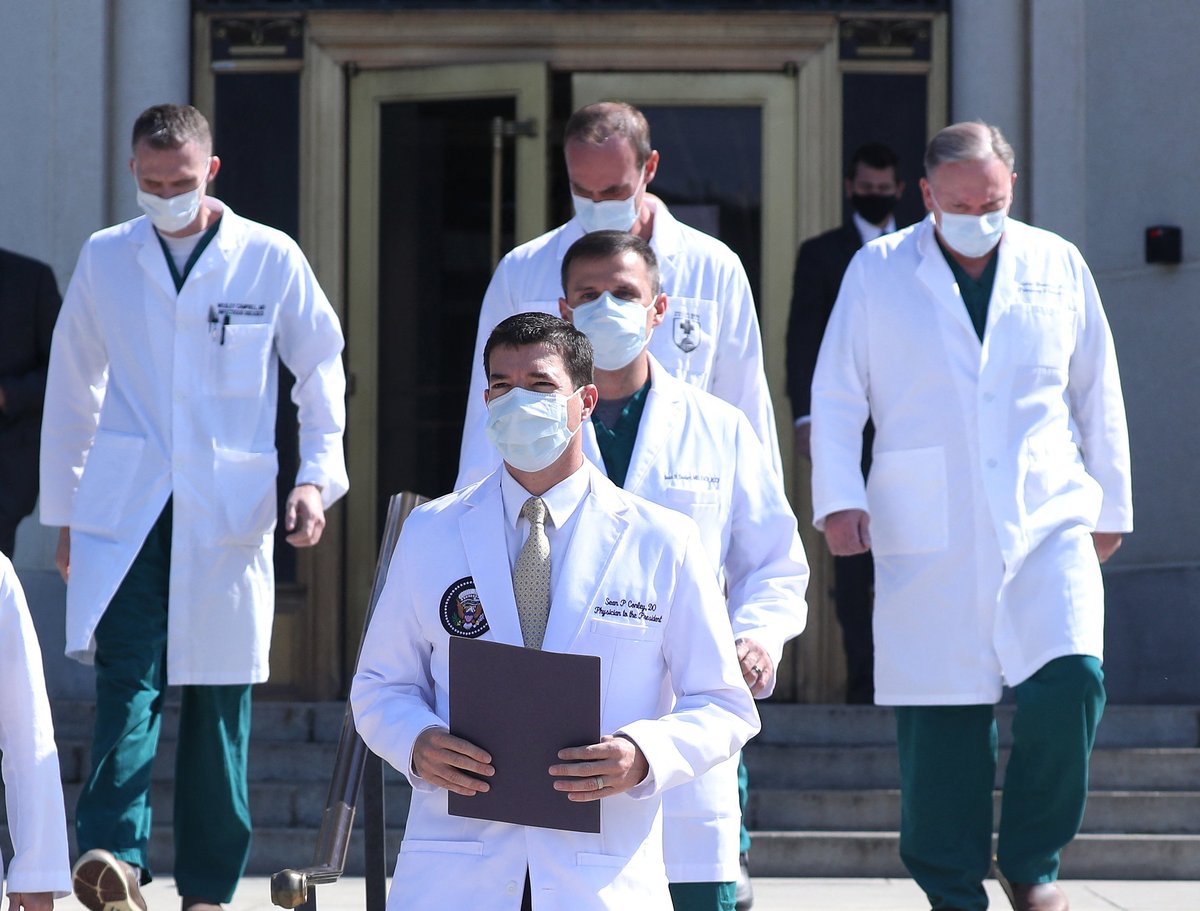 "The president's vitals over the last 24 hours were very concerning and the next 48 hours will be critical in terms of his care. We're still not on a clear path to a full recovery," he told Fox News.

In news just in, the White House has given officials the names of 206 individuals who attended events with Donald Trump in the hours before he tested positive.

'5km extension' threat to Victorians, after thousands broke the rules.

Victorian Premier Daniel Andrews has warned Melburnians could be confined to a 5km radius of their homes past October 19 if they don't follow the rules.

Thousands of people gathered at St Kilda Beach this weekend and a group of people from Tarneit in the city's west, who had bragged online about ignoring restrictions and going to the beach in Altona, became aggressive when approached by police.

In another incident on St Kilda Beach, a 32-year-old man was arrested after police asked him to wear a mask and a clash ensued in which they had to use capsicum spray to subdue him. #9News https://t.co/dEylldpL4p

"We are so, so close — let's not any of us do anything that might undermine the very positive numbers, the very strong performance we have seen in recent days.

"The numbers are coming down, once we get them low, we can keep them low and we can open up again," said Premier Andrews.

He said if people didn't do anything "silly or stupid" now, then Victorians would be able to continue to go to the beach this summer.

Hunt for family of elderly woman found on the side of the road ends.

The hunt to find out the identity of a frail, elderly woman found by the side of the road on Queensland's Sunshine Coast has ended.

The woman, believed to be in her 80s, was picked up by a driver in Mooloolah Valley on September 6 and dropped outside Nambour Hospital.

Her identity remained a mystery for weeks, with police initially unable to ask the woman who she was because she was suffering a "challenging health situation".

Police are still trying to identify an elderly woman who was abandoned outside a Sunshine Coast hospital 16 days ago. https://t.co/zaJttwzpr4

Police said on Sunday the woman recently began talking and declined to disclose her identity for personal reasons.

"As no criminality has been detected, police have ceased involvement in this matter and the woman will be left in the care of Queensland Health," a police spokeswoman said.

Investigators issued a number of alerts in a bid to reunite the woman with her family after she was found, saying the situation was unique and almost like a reverse missing person's case.

Final update: Unidentified elderly woman, Nambour - Police would like to thank the public & media for their assistance. The woman recently began speaking with police. She is aware of her identity & does not wish to disclose this for personal reasons. https://t.co/iLoSIZ7rNf pic.twitter.com/dGjuf2CVuo

NSW Premier Gladys Berejiklian wants public servants back to work in the city as the government looks to fire up the COVID-19 disrupted economy.

The state on Sunday recorded its ninth consecutive day without any community transmission of the virus.

Two cases in returned overseas travellers in hotel quarantine were diagnosed in the 24 hours to 8pm on Saturday night, bringing the state's total number of cases to 4045.

The premier said NSW's public sector workers would be urged to return to offices in coming weeks in a move considered to be a significant step in the virus recovery.

Managers will be encouraged to use flexible rostering and workers are asked to avoid using public transport during peak periods whenever possible.

The border between Queensland and NSW is set to reopen on November 1 provided NSW has no mystery cases of COVID-19 in the preceding 28 days.

A fire has destroyed dozens of homes in rural New Zealand and led to an entire township being evacuated in the early hours of Sunday morning.

Fire and Emergency crews were alerted to the blaze, at Lake Ohau village in the central South Island, about 300 kilometres from Christchurch.

Getting regular updates through from our Minister of Civil Defence, Peeni Henare who is on the ground as Fire and Emergency battle fires at Lake Ohau. There will be another update later this morning, but till then I know everyone will be thinking of the community there right now.

The fire is about 200-hectares in size. Five helicopters were in the air assisting in firefighting efforts alongside 16 fire crews on the ground.

New Zealand fire officials described conditions as very challenging with strong winds continuing. "Unfortunately some houses have been lost and we are working with those affected in the community," a statement said.

The fire is believed to have started by an electrical arc from overhead power lines, although fire investigators remained on the scene.

Local authorities had opened welfare centres, and about 90 people had been evacuated from the area.

- New Caledonia has voted against independence from France for the second time in as many years with the "no" vote gaining 53.26 per cent of the vote.