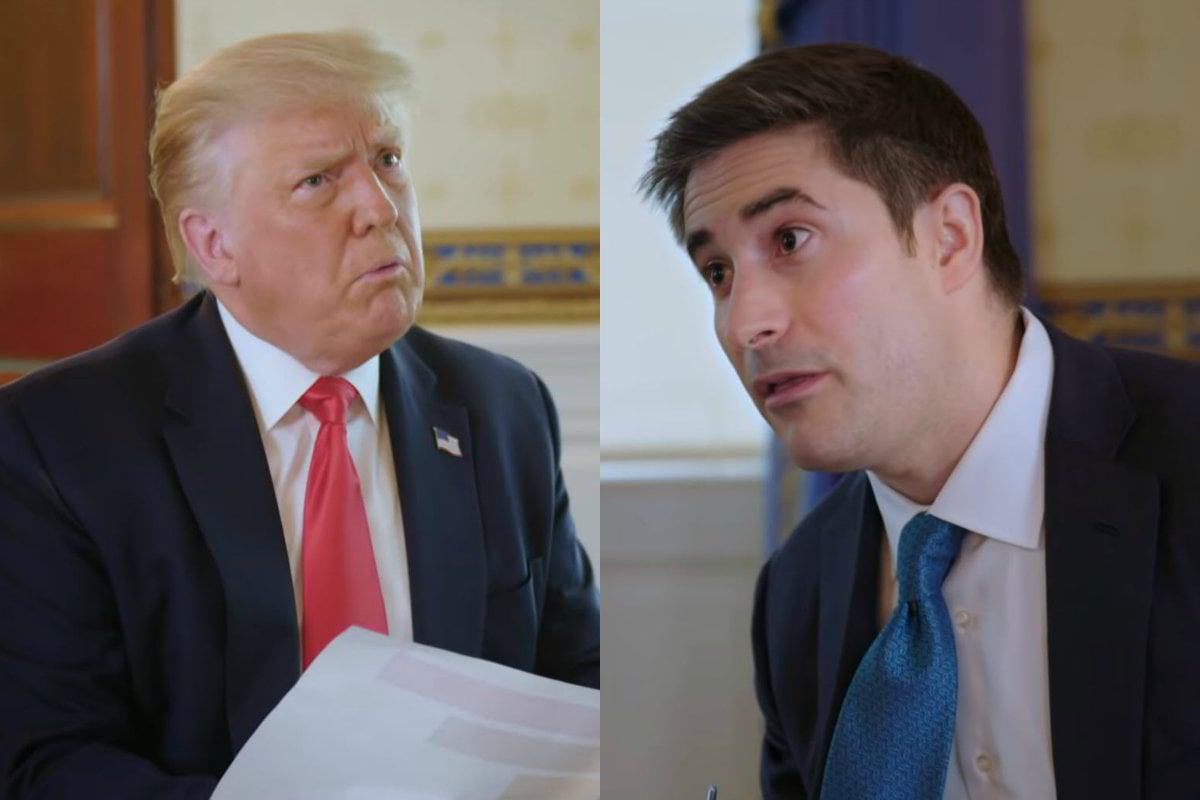 Hello and welcome to another one of Mamamia's reality TV recaps. Oh, wait, this isn't a reality TV episode. It is an interview with the current President of the United States, Donald Trump.

But there's grandstanding and tension and some totally unnecessary props, so it's basically the same thing.

Oh boy, it's a brand new day in the Trump presidency and the 'Leader of the Free World' is excited for another interview in which he will look fantastic and definitely not out of his depth.

Journalist Jonathan Swan, the son of our COVID crush Dr Norman Swan, turned up to the White House for an interview with Trump in a blue tie and we appreciate his subtle political clothing choice.

In walks Trump and we are fairly surely he mutters "good" when Swan thanks him for his time. Hooo boy, strap on in.

Trump starts off by saying he's been given a lot of credit for positive thinking and sir, when was that?

Watch the promo for Jonathan Swan's interview with Donald Trump below. Post continues after video.

Swan says it is good for people to hear positive thinking, but it's probably also helpful to be realistic about a virus that has killed 150,000 Americans.

"You've been saying it's under control..."

"Nobody knew what this thing was all about. This has never happened before... And by the way, if you watch the fake news on television, they don’t even talk about it. But you know, there are 188 of the countries right now that are suffering, some proportionately far greater than we are. Okay? As bad as we are."

We're only a few minutes in but Swan looks just a little bit... broken. 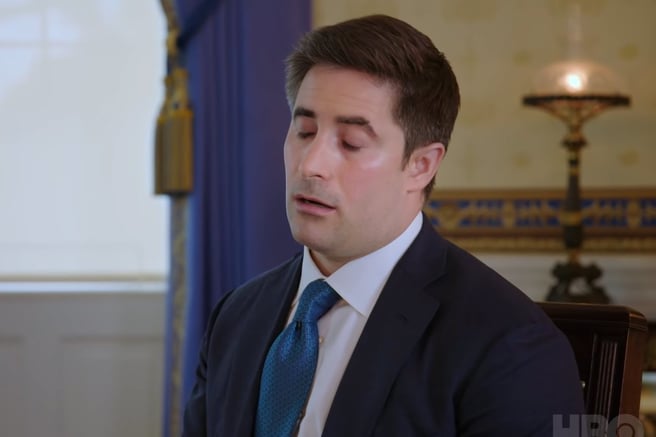 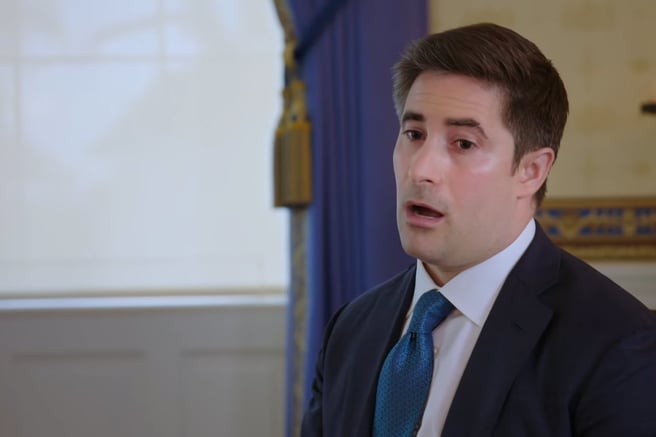 Trump then says Moscow is doing much worse and holy moly, we hope he got permission from Putin to talk like that.

He talks about economies and farmers and all Swan can say is "I-" because no Swan, shhhhh.

There's then some weird tangent about how the US' restrictions actually saved millions of lives but also Trump had a big crowd at a Tulsa rally except he definitely didn't, but he DID OKAY? Precisely nobody follows what is going on.

Can we get back to the pandemic a.k.a the biggest event of our lives please Mr President?

Trump is like, yeah duh: "They are dying. That’s true. And it is what it is."

Trump says the virus is under fkn control thank you very much. 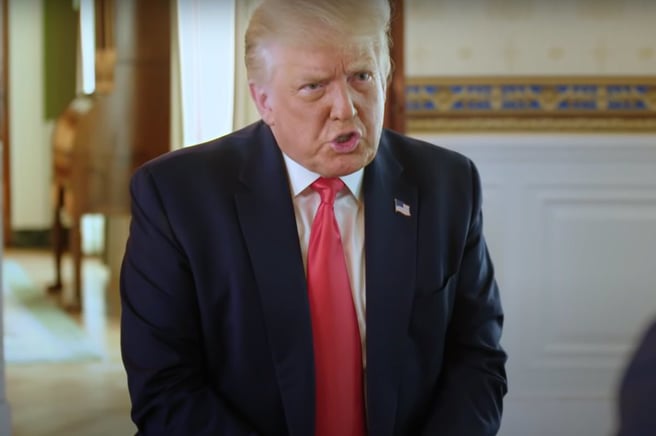 "If you don't look at the data it is clearly under great control, the greatest control."

SHHH, it's time to talk about testing.

"We've done 55, it'll be close to 60 million tests. And there are those that say, you can test too much," Trump says.

"Who says that?" Swan asks.

The following goes on for what can only be described as an eternity. All of us, including the camera operator, are just like:

OUR NECKS ARE SORE.

Trump says when he "took over" there was no test and Swan is like, yes maybe that could be because the virus didn't exist then, idk just an idea! No worries if not!

Swan brings up COVID-19 related deaths again, even though it is what it is? Mate, didn't you get that?

PAUSE. TRUMP HAS LITTLE GRAPHS ON PIECES OF PAPER.

They're not even laminated. The US should cut its military budget slightly to accommodate better Oval Office props. 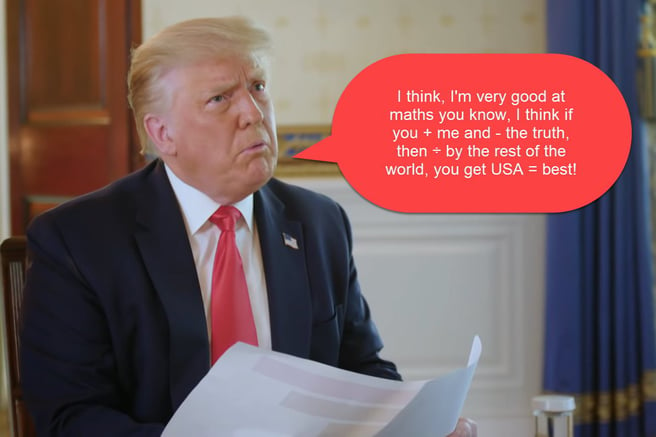 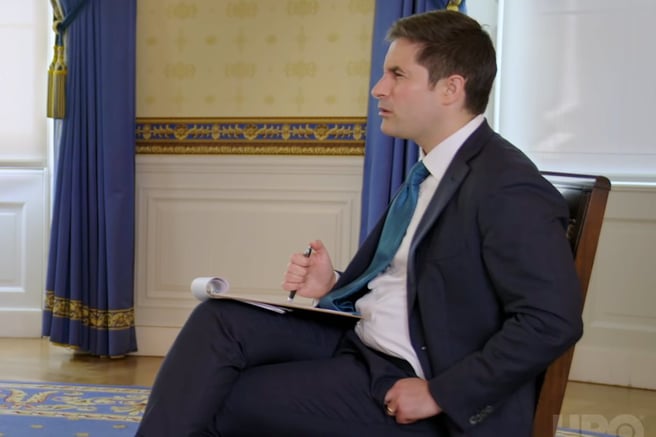 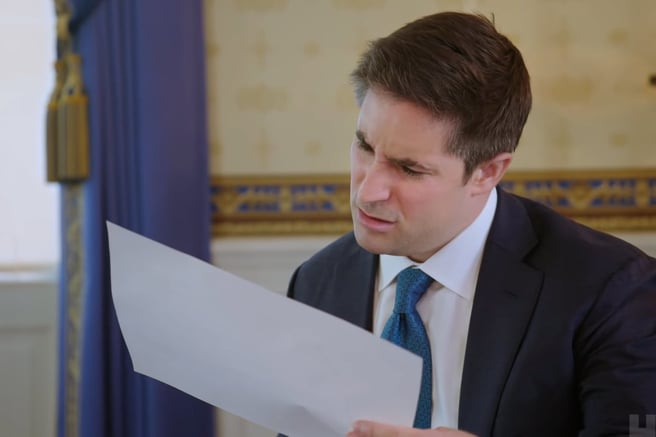 Trump says it's not and it can be assumed AXIOS edited out the next part of the interview, where Swan just... needed a moment.

Swan can't take it anymore so he decides to talk about Russia, a much less divisive topic than Americans dying in their tens of thousands.

Trump says he doesn't believe American intelligence that Russia put bounties on American soldiers and then out of left field, says nuclear proliferation is a much bigger problem than global warming "in terms of the real world" and heck, we didn't realise climate change was only happening in a fantasy land. Can someone tell the scientists? We've been saved.

Swan questions if Trump reads and at this point, it seems like a fair question.

"I comprehend extraordinarily well, probably better than anybody that you’ve interviewed in a long time. I read a lot," Trump says.

LET'S MOVE ON. It's time to talk about election results.

Swan asks Trump what he meant when he told Fox News he couldn't say whether he'd accept the results of the 2020 Presidential election.

Trump says mail-in voting is new and Swan says it definitely is, if you consider the American Civil War as recent.

They argue about whether mail-in ballots can be corrupted and Trump says someone once got a ballot for their dog. That would only be possible if they registered their dog, and idk, if they managed to do that successfully it seems like their dog should be allowed to vote.

Maybe we should just let all dogs vote? I wholeheartedly believe if dogs could vote we wouldn't be in this mess.

Trump's hands continue to move in and out, because he's saying important things. 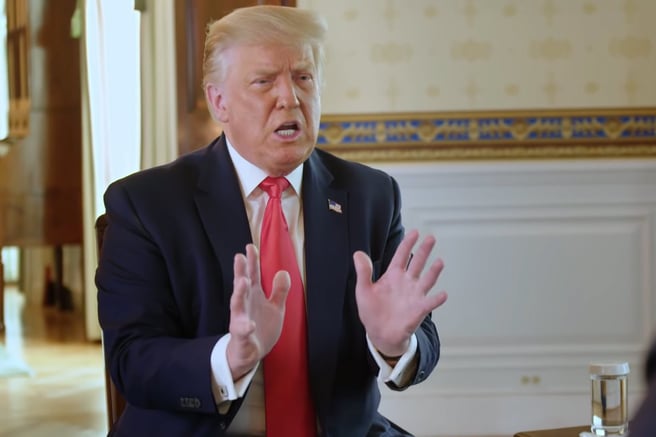 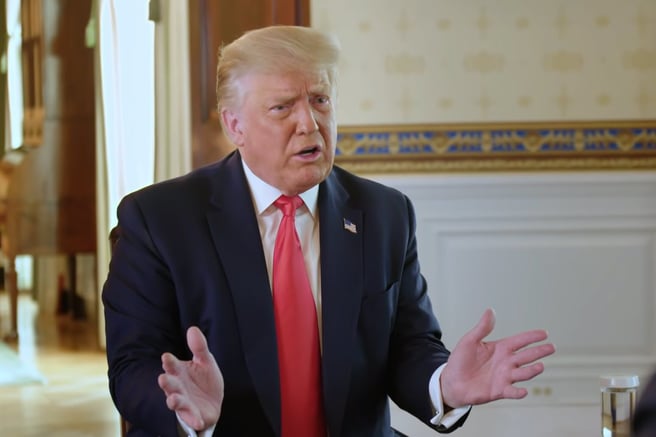 "And then I move them out," 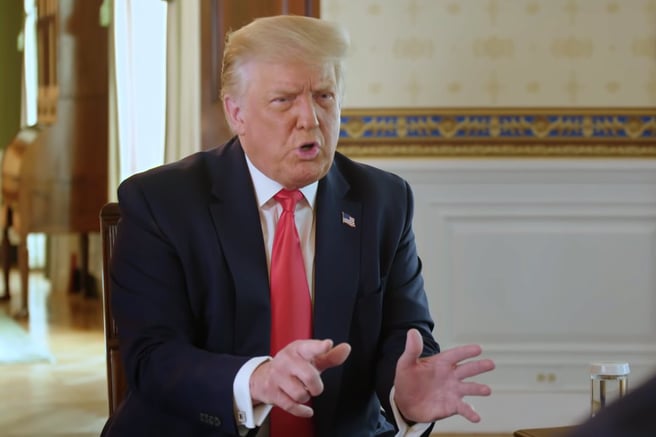 Trump then reiterates he wishes Ghislaine Maxwell well and dude, Swan just gave you the opportunity to take back comments that you wish an alleged child sex trafficker well and you didn't take it.

Trump is talking about pigs and bacon. Sir, you should've eaten before the interview.

Because Trump is clearly very hungry, Swan wraps up the interview with a few easy questions about civil rights.

Trump is adamant he has done more for African Americans than any other President, including the guy who passed the Civil Rights Act in 1964 which outlawed discrimination on the basis of race and colour. 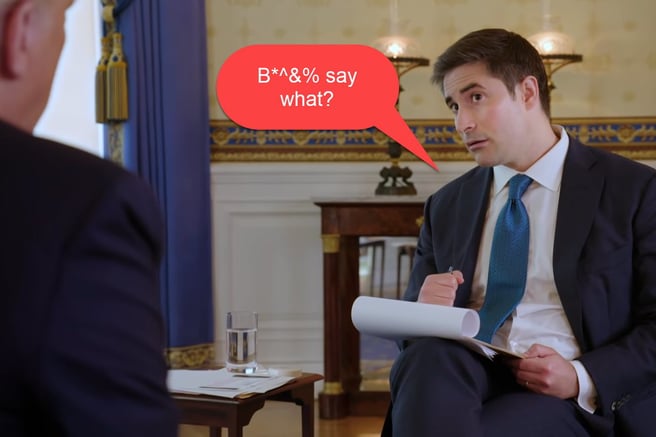 The camera operator has already booked in a physiotherapy session to work through the kinks in his neck.

It's time to stop, please, for the love of God can we stop?

"Mr. President, you’ve been so generous with your time and we really appreciate," Swan says.

UNTIL NEXT TIME, or uh, hopefully never. Ever. Again.

Reply
Upvote
Trump's handling of the coronavirus has been woeful, but I would love to see a full length interview with Joe Biden on how he plans to handle the virus and economy, if (and he probably will) he wins the election in November
L
laura__palmer 2 years ago

Reply
Upvote
3 upvotes
@guest2 Even thought I think Biden is an old blowhard with little to offer, let's be fair here. He's inheriting an absolute dumpster fire if he wins.
G
guest2 2 years ago

Reply
Upvote
@laura__palmer  troubleis, no-one knows what Biden even stands for, he refuses to debate Trump, won't leave his bunker.  When he is interviewed, he sounds like he has early stage dementia.
C
cat 2 years ago

Reply
Upvote
4 upvotes
@guest2 Biden has been in the senate for decades, people know what he stands for. Health care, education, he’s been vocal in the support of BLM, he’s a regular middle of the road liberal.
And who would debate Trump? He’s torturous even in to interview. He refuses to play fair, yells over everyone and makes no sense. Hillary clearly outperformed him in all their debates but he threw around misogynist comments and wild allegations, abused the press and just declared himself the winner anyway. Trump is losing the election all by himself, there’s no reason for Biden to engage just so Trump's supporters can trash him.
And a bunker is a very reasonable and socially responsible place for a senior citizen to be in a pandemic. At least he’s there to avoid the disease, not because he’s hiding from protestors like Trump.
L
laura__palmer 2 years ago

Reply
Upvote
2 upvotes
@guest2 As Cat says, he's a long standing liberal. His policies aren't a mystery.
When Trump is interviewed, he comes across as a deranged, unhinged toddler with little grasp on reality. And debating him, as Cat says again, is a waste of time.
I don't think Biden was the right choice for the Dems, he's a bit creepy and he does seem to have some memory problems. But Trump is in a league of his own when it comes to incompetence and ignorant arrogance. There's no point debating who would be the better choice, because Trump's actions over the course of his Presidency says it all.
G
gu3st 2 years ago