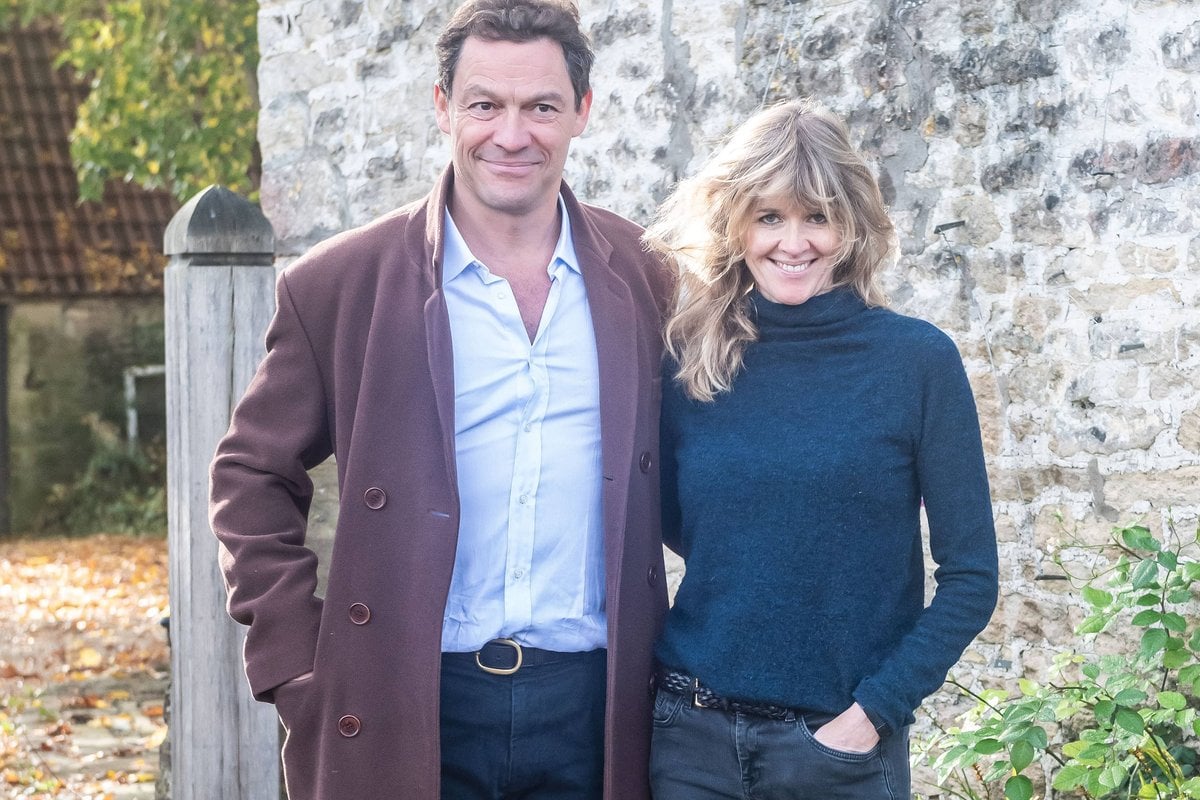 This week, in the tenth month of the strangest year that ever there was, something depressingly familiar happened.

A famous man was photographed with a famous woman who was not his wife, and the Internet momentarily lost its addled, overwhelmed little mind.

You might know Dominic West as McNulty in The Wire. Or as Noah Solloway in The Affair. He's an English actor of a certain craggy gruffness. One of those men who appears to have been born aged 35. These days, he's 51.

Watch the trailer for The Affair. Post continues below.

You might know Lily James as Cinderella. Or as the young Donna in Mamma Mia! Here We Go Again. She's about to be everywhere in the new do-over of Rebecca. An English actor, too, she's 31.

These two people were stalked and photographed by paparazzi cameras in Rome last weekend. In the pictures that we will not be showing you, Dominic leans close into Lily's neck, a hand pushing her hair back in what looks like an intimate moment, his lips apparently close to her skin. In other frames they are both riding an electric scooter, in others they are eating with another woman (reported to be their mutual manager), laughing, eating lunch, drinking wine, being in Rome. The bastards.

The photographs appear, on the surface at least, to be a classic paparazzi Gotcha moment. A rare thing in 2020, when celebrities out their own shortcomings on social media and the stalking of private people getting on with their lives has largely fallen out of favour (Mamamia does not run paparazzi images, choosing not to support an economy built on stalking women and children).

They're not common, genuinely revelatory pap moments. Think Angelina Jolie and Brad Pitt's relationship finally confirmed by grainy images of Brad playing with a tiny Maddox on an African beach in 2005. Or Kristen Stewart being groped by Rupert Sanders in a car in 2012, when he was married with kids and she was one half of a generation's most swooned-over couple. Or, if you want to go way back to 1992, there was a time when a princess called Fergie was photographed having her toes sucked by a Texan oil tycoon while she was meant to be married to Prince Andrew (so many things wrong with that sentence by 2020).

Anyway, back to the Internet losing its mind and what came after. Because while all of this talk of an affair is tawdry gossip, what happened next was not.

At almost warp-speed, West was back in Britain by his wife's side, posing with a kiss outside their home and leaving out a charming, hand-written note for those lovely paparazzi chaps.

'Our marriage is strong,' it read, in photogenic cursive. 'And we're very much still together. Thank you.' 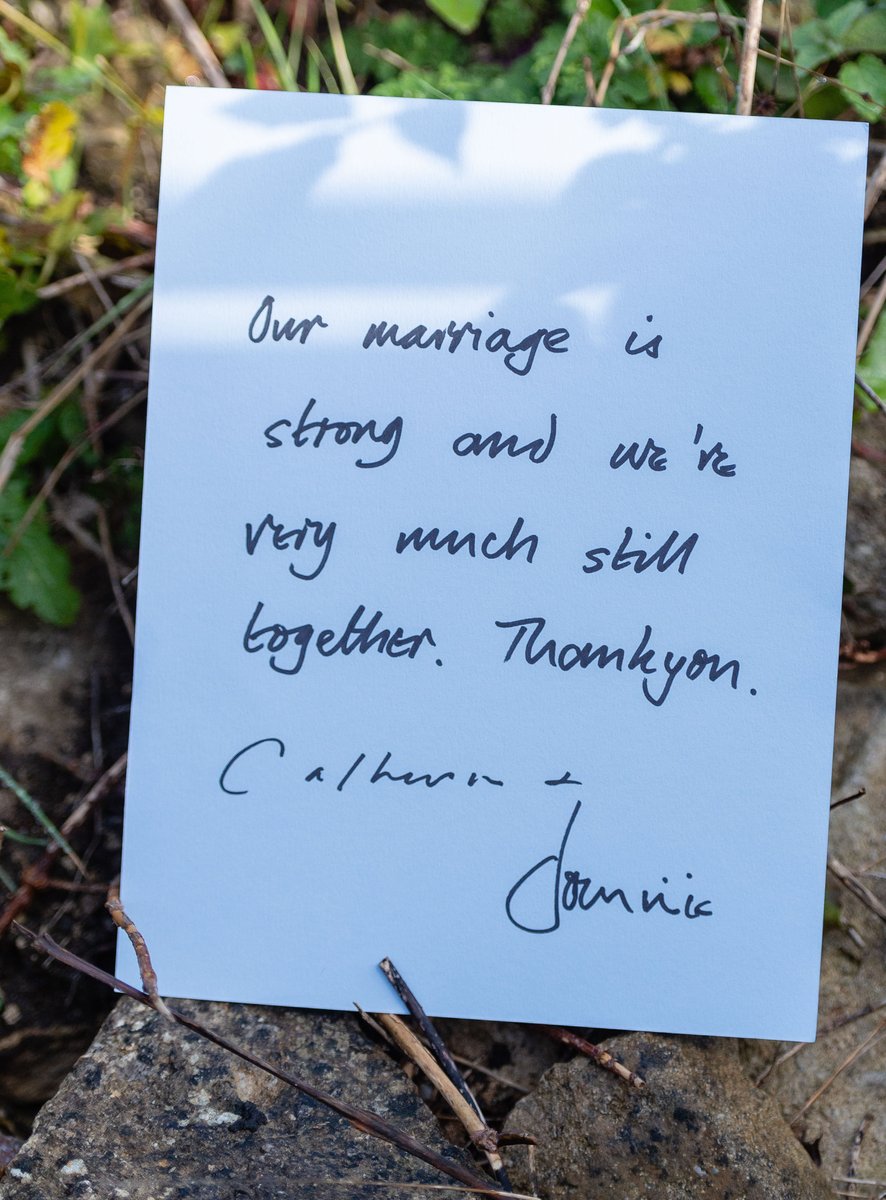 Classy move, or cynical press play? Well, it seemed to work, to a point. Immediately the narrative switched away from the Roman holiday, and over to what Catherine Fitzgerald was thinking, posing and smiling like that. It's usually the preserve of a politician's wife, shutting up for the cameras as if she was, in Hillary Clinton's infamous words, "standing by [her] man like some little Tammy Wynette."

Headlines made assertions like, 'I Know How Dominic West's Wife Must Be Feeling Right Now'. The photo call was dismissed as a 'performance'. Reports flew that Lily James called Catherine to explain, and that's what made her go and stand out in front of cameras and kiss her "naughty" husband.

But maybe, just maybe, Catherine Fitzgerald doesn't give a shit about her husband's European scooter partners? Maybe she has bigger things to worry about. Like her kids, and her job, and the fact the world appears to be slowly ending. You know, the things we're all worrying about in 2020.

When it comes to relationships, even in this fluid time, the notion solidly persists that women want monogamy above all things, and are almost always the aggrieved party if that is not what they get.

West's wife, Catherine, is a landscape designer, and the mother to three of his four children. She's an Irish aristocrat by birth and a Viscountess by her previous marriage. She and Dominic run her ancestral home, a castle in Limerick, Ireland, as a very fancy hotel for hire.

Apparently, Dominic and Catherine met at Trinity University in Dublin (yes, the one in Normal People) almost 30 years ago. They dated, and he was at her 21st birthday party. But then they broke up, and both went on to meet and marry other people, before finally coming back together, having their kids and marrying in 2010.

That sounds like people who know each other pretty well. And West says of Catherine, explicitly, that she gets the reality of a handsome actor's life. Of his life.

"She doesn't care," he told Esquire in 2012, when he was asked if she was worried about The Affair getting a little close to home. “As long as I'm back with the kids, I can play up my advantages as much as I like. I've known her for twenty years now, and she dumped me on several occasions. I can't surprise her in any way now.”

Perhaps in 2020 we should be giving a woman the benefit of the doubt that she can handle a broader definition of her primary relationship?

And the fact it's 2020 should probably also colour the way we see those dodgy paparazzi images in the first place.

It's perfectly possible that in a year or so you'll be reading an interview with Lily James and the journalist will raise the Dominic West 'scandal'. She might well pull a face that suggests she was not that keen on her older co-star (the pair are filming a mini-series in London, and have starred together on the stage before) laying his hands on her during a casual business lunch. It's perfectly possible that they're good mates who like to flirt. It's also perfectly possible that he's the kind of guy who brushes hair away from young women's faces without being asked. Especially after an Italian lunchtime white wine or two.

Everything changes, and yet nothing does. Our appetite for catching out a celebrity behaving badly persists. Our assumption of pity for a "wronged wife" persists. Our willingness to believe the worst from some grainy imagery persists.

And the script a famous movie star has to follow when they've been 'caught out' hasn't changed in decades.

Nothing to see here, move along.