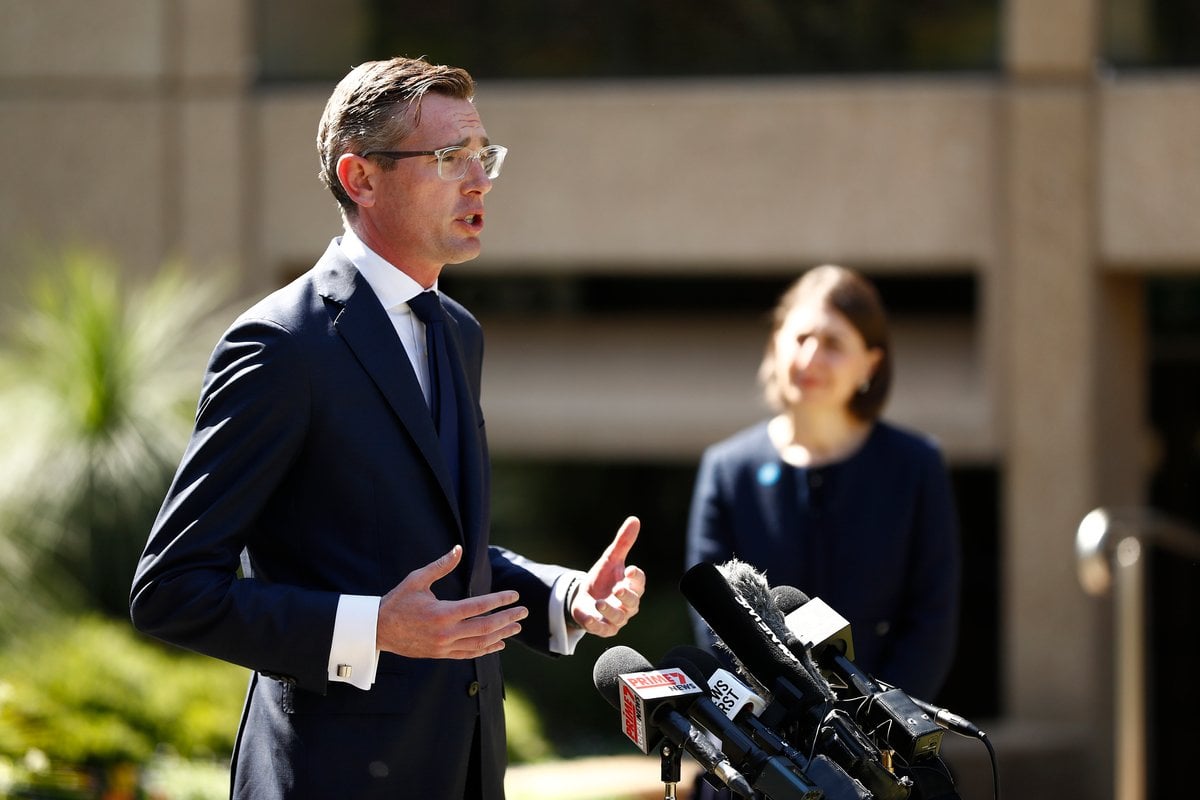 Just three days following Gladys Berejiklian's resignation as the NSW premier, it appears we may have a new guy running the show: Dominic Perrottet.

Berejiklian announced her resignation after the state's anti-corruption watchdog announced it would investigate her over her relationship with ex-MP Daryl Maguire.

"I have no option but to resign from the office of premier," she said on Friday.

She stated she would leave parliament too as soon as a by-election for her seat can be held, but it seems that things are being swiftly organised - with conversations being held about the premier position over the NSW long weekend.

Now, as of Sunday evening, the ABC are reporting that New South Wales Treasurer Dominic Perrottet is set to become the state's next premier.

At a press conference on Sunday evening, Mr Perrottet said he was 'putting his name forward' to become Liberal leader, and therefore Premier, at a party room meeting on Tuesday.

"I know that this is a time of challenge in our state but I have complete hope and optimism that NSW is in a very good place," he said.

While it's not a done deal quite yet, the ABC understands a 'deal has been done' that will see the vote be a formality very soon.

Another possible contender was thought to be Member for Bega, Andrew Constance, who attracted significant attention during the Black Summer bushfires of 2019/20 when he was praised for highlighting the plight of his regional constituency. Constance previously served as treasurer and has held the role of Transport Minister for the past six years.

However, on Sunday, the 47-year-old announced he will resign from state politics and will run for the federal seat of Gilmore. He also confirmed he will not contest the NSW Liberal leadership position.

"After almost 20 years serving in the NSW Parliament, today I have made the decision to nominate for local preselection for the federal seat of Gilmore," Constance said in a statement on Sunday.

"There has been a lot of speculation over the past few weeks, but I will be resigning as Transport and Roads Minister this week and as the Member for Bega by the end of the year."

There are five senior liberals vying for the top job but Mr Howard wants Mr Perrottet to lead the state he resides in.

"I do think his background, his experiences as treasurer and very importantly his commitment to economic reform mean that he, of all of them, is the best person to take over the helm," Mr Howard told Sky New's Sunday Agenda program.

"We need to keep going with things like economic reform, he is very committed to taxation reform."

Planning Minister Rob Stokes is so far the only senior cabinet minister to formally throw his hat in the ring, arguing he possesses "the right balance of experience, vision and integrity" needed to assume the role at such a pivotal time.

Listen to this episode of The Quicky which discusses the very public private lives of female politicians. Post continues after podcast.

Another considering his options is Attorney-General Mark Speakman.

"I'm heartened by the encouragement I've received from colleagues to nominate and I'll have more to say tomorrow," he said on Saturday.

Other potential contenders include Jobs Minister Stuart Ayres and Transport Minister Andrew Constance, while Environment Minister Matt Kean and Police Minister David Elliott are being spoken of as possible deputies.

A wildly popular premier, Ms Berejiklian since her resignation has been lauded by everyone from state Opposition Leader Chris Minns - who said he "cannot fault her dedication and hard work" - to Prime Minister Scott Morrison, who praised her "heroic" qualities.

Constituents on Saturday flocked to her home and office with flowers and balloons, while others put up handmade signs.

Ms Berejiklian announced her resignation on Friday after the state's corruption watchdog disclosed the 51-year-old was under investigation for potential breaches of public trust.

The ICAC says it is investigating whether she "exercised public functions" in a position of conflict given her secret five-year relationship with ex-MP Daryl Maguire.

Teary and at times angry, she said on Friday she had "no option" other than to resign but denied any wrongdoing.

For a clearer understanding of why Gladys Berejiklian resigned last week, and what we know about what happens next, read this Mamamia explainer.

Reply
Upvote
1 upvotes
Hope Stokes wins. If Perrotet was Premier when COVID hit, we would have had an experience similar to the UK's. He's on the record as against lockdowns as recently as in July.
C
cat 21 days ago

Reply
Upvote
2 upvotes
@gu3st yes, he threatened a leadership challenge because he didn't want to lockdown back in June because of the impact on business. Thank goodness this didn't happen any earlier if he's the one who takes over.
S
suz 20 days ago

Reply
Upvote
1 upvotes
@gu3st  I agree with you VERY scary, god help us. We go from bad to worse.
S
suz 19 days ago