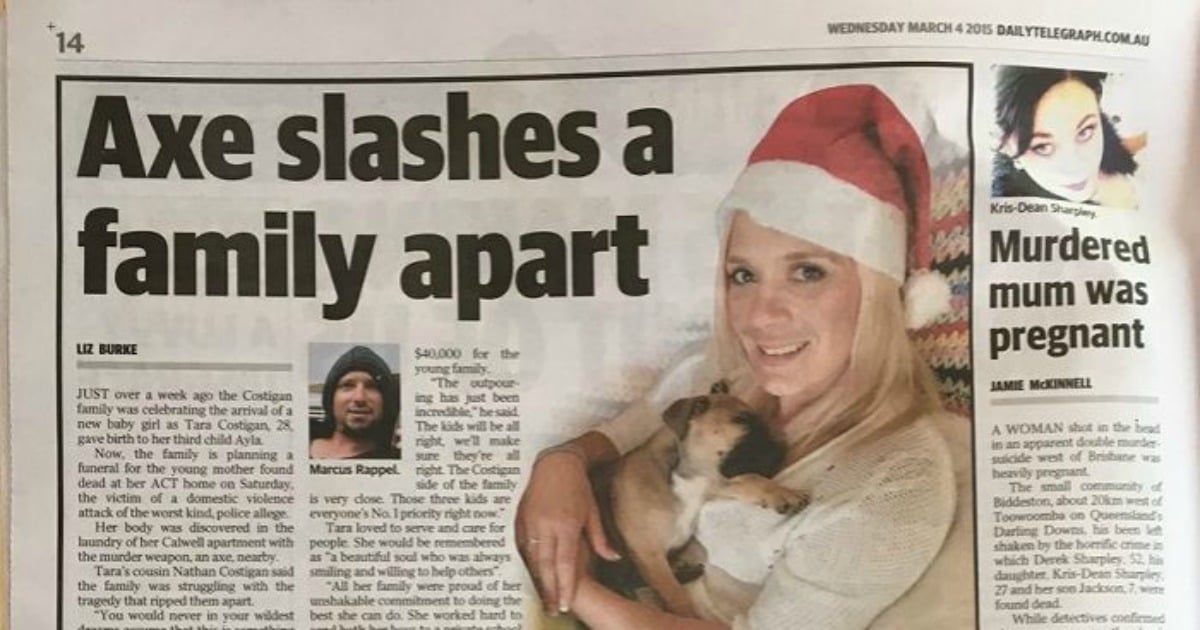 A new report shows that up to 15 per cent of articles on domestic violence imply an element of victim blaming. Can it be a coincidence that roughly the same percentage of people think women are somehow responsible for the violence inflicted on them? Julia Zemiro calls our media to account.

It’s the beginning of June and 31 women have been killed by violence so far this year in Australia. In 2015 there were 79 women murdered, the majority of which by a male family member.

These deaths are just the tip of a grotesque and insidious iceberg full of countless numbers of women and their children living in fear for their safety.

Many of us become aware of this issue when we read or hear about it in the news, another tragic death in the headlines.

The media play a powerful role in bringing this issue to our attention and shaping the national conversation. What’s causing it and what will it take to stop it before it starts.

With this powerful platform comes a great deal of responsibility.

I hosted the inaugural Our Watch Awards last year, an event that promotes the positive role the media play to help prevent violence against women and their children.

Positive, I hear you say? Is there a “good” news story when it comes to violence against women? Yes, It IS possible to prevent this violence. And more importantly, it is vital.

How we interpret a news item affects our feelings and thoughts on domestic violence. How journalists and editors present a story can speak volumes. Who or what is selected to appear in the article and how those individuals and events are portrayed is very important. Language matters.

I’m not a journalist. My job is not to report facts. But surely there’s more to this “story” than click-bait articles that turn tragedies into entertainment.

The Our Watch Awards, administered by the Walkley Foundation, honour those who do exemplary work to help end violence against women. Highlighting the great work these journalists do is a critical part of moving the national conversation forward from one that dwells exclusively on gruesome tragedy to one that starts to unpick the drivers of this violence and a world where women and children live free of it.

But while there is much great work worthy of recognition at this year’s Awards (entries open for the 2016 Awards today) exemplary reporting is not always the norm. Our Watch and Australia’s National Research Organisation for Women’s Safety (ANROWS) today released a new report on the nature of reporting of violence against women by the Australian media. The report stands out internationally in its size and scope.

The research (4,516 items reviewed over four months – February to June 2015) found that there is a large volume of articles about violence against women, and this is a good thing. We are no longer living in the dark about domestic violence. We are talking about it, reading about it, calling it out. But the research found there are still challenges in reporting of it. There is still a lack of social context and an understanding of the underlying drivers of violence.

Distressingly too, few media items (only 4.3 per cent) included information for women on where to seek help. And by help I don’t mean a link to self-defence classes – which, again, implies that the woman should be ready to defend herself rather than her husband understanding that he has no right to harm her.

According to the National Community Attitudes Towards Violence Against Women survey, one third of people don’t know where a woman can get the crucial help she needs if in a violent situation. It’s hard to believe there’s no correlation here.

Blaming victims is another attitude still present in too many articles about incidents of violence against women. About 15 per cent of articles on the issue included information about the behaviour of women, much of which implied women were responsible for the violence. And the shocking thing is that these attitudes reflect what society thinks; research tells us that as many as one in five people think women are somehow to blame for the violence inflicted upon them if they had been drinking or flirting or out alone. Again, is this correlation between media reports and community attitudes purely coincidence?

The same amount of articles offer excuses for the perpetrator like, he was drinking, using drugs, jealous, seeking revenge; he ‘snapped’ or ‘lost control’.

And interestingly, male perpetrators of violence were often rendered largely invisible in the news; instead, there were headlines such as, “Axe slashes family apart:”. Well, that axe should definitely be held accountable for its actions and go to jail.

Jess Hill, the inaugural winner of the 2015 Our Watch Gold Award for her reporting on violence against women, devoted a year of her life to researching and reporting exclusively on domestic violence. Her entry comprised two long-form articles, (one for The Monthly and one for The Guardian); and two radio documentaries for the ABC’s investigative Background Briefing program. A year makes for in depth reporting.

But no matter the length of any report, care, diligence and balance is essential.

As a reader, I put myself in that woman’s position. I imagine her life constantly on pause, and in danger, as she cannot move through this cycle of violence. I imagine that woman as a teenager when everything was still possible.

These women and their children have already borne so much. As people in the media, we have the power to make it shift with the language we use and the voices we choose to highlight.

Julia Zemiro is a media personality, actor, presenter, writer and an Our Watch Ambassador.

If you or anyone you know is experiencing abuse or violence, or if this article raises feelings of depression or anxiety, support is available from:

Often articles detailing family violence don't focus on the perp and vilify the victim, especially when the victim comes from an underprivileged background and is black.
Another thing that bothers me as a feminist and a mother of daughters is the constant articles about female perps of crime. It isn't a realistic representation of the true crime stats and discriminates against women. If for example there is an article about a female murderer there should be 20+ articles about male murderers as that is a fair representation of true crime stats. Men murder at far greater rates but you would not know that by looking at the newspaper. Infact because of the sensational nature of women doing crime, we get the idea through the media that women are just as likely to commit crime as men yet that is so far from the truth it's unfair.
We as women are shooting ourselves in the foot if we don't speak up and fight for a fair representation in the media.

That's interesting, because I feel I see far more articles on news sites about men murderers.
I think the women's ones stand out more (and they make a bigger deal about them) precisely because they are comparatively rare.

I wanted to comment that it has been my 1st hand experience that DV is NOT a gendered issue after having this fact impressed upon my face by no less than 3 female significant others thruout my life (I'm already waiting for the replies implying how I probably deserved this.) And NO, I never once retaliated or defended myself; Usually just stood there while trying to keep my balance and composure as best I could. Most men who grow up with strong fathers learn to keep their emotions in check and disconnected from physical expression. It's funny how this same disconnect was often used as the justification for why I was deserving of this treatment at the hands of these women. Like my father before me I realise the importance of teaching my 2 sons the need to be reserved. But I am also teaching them no good comes of allowing women to infiltrate your life and stake a claim to your existence. Men need to go out into the world and make there own way. Women should only ever be a past time. Statitically speaking marriage with children in this day and age of misandry and family courts is a kind of insanity a man can not triumph against. The only way to win is to not play their game.

Since the article was about very specific issues regarding media and the reporting of male on female violence I find it disturbing that you make it about male victims. You see, if you would of raised male-on-male violence, which is a bigger concern than these imaginary women going around killing men, then people would of believed you. However, since you are spinning a yarn that is pulled out every single damn time male-on-female violence is discussed we can't do anything other than disapprove.

The mention of family court re-emphasises my point that you are in the territory of woman hating, again your misoygonistic comments regarding women infiltrating men's' lives speaks to you feeling you are at war and you need to fight.