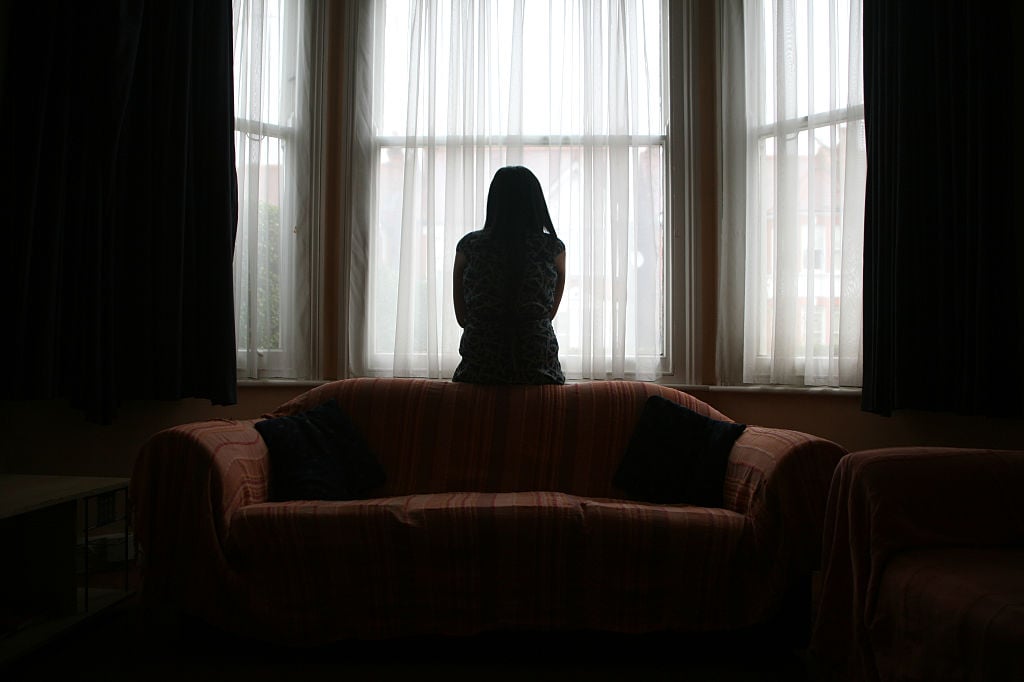 WARNING: This post deals with domestic violence and sexual abuse and could be triggering for some readers.

Vicki* was a career woman with her own home, car and annual holidays with her two children when she met Rob* at work.

"I was a single mum co-parenting two kids, but life was good," Vicki told Mamamia.

"I met Rob when we attended a training course together and there was an immediate physical attraction. I felt like I was punching above my weight and that I was 'lucky' this gorgeous man was into me. It was a whirlwind romance but looking back now it's easy to see the red flags."

Vicki says that Rob was moody and unsociable. He hated meeting her friends and didn't want to hear about her day.

"I would tell him about a meeting at work and he would straight away cut me off by saying something like, 'they're a bunch of c***s' and so I would stop. I couldn't debrief to my man and that felt strange to me."

After a few months of dating, Vicki flew to the UK to visit an old friend for a once in a lifetime trip that she had planned for years. Rob offered to help with her household while she was away, but just two days into her trip, he dropped the kids to her ex-husband and flew to meet her.

"He love-bombed me by saying he just missed me so much.

"There wasn't much love in my childhood. My mum never told me she loved me and yet here was this attractive man flying across the world. My self-esteem was low and his grand gesture took me in."

Watch: Women and violence, the hidden numbers. post continues below.

Rob's behaviour became increasingly difficult and Vicki says she often felt embarrassed or uncomfortable when they were out together.

"He would come with me to my kids' gymnastic carnival, then sit in the front row ignoring them and playing a game on his phone, while my kids looked to him for some sort of acknowledgment.

"His moods were hard to judge, and I was always on high alert thinking about how my actions might affect him. I would try to guess all of his possible reactions and it was very stressful."

Just a few months into the relationship, Vicki discovered she was pregnant.

Rob was ecstatic about the baby, but he began making outlandish demands and taking control of the family finances.

"He would say, 'if you love me you'll put my name on the deeds to the house' which I did. He also persuaded me to change my first and second names as he said my family didn't love me.

"He had a spreadsheet to control my spending and money for the kids, but would do things like upgrade his travel airfare to business class when he was away for work. He would send me photos of seafood platters in luxury hotel rooms while I was at home worrying about a basic budget.

"He slowly stripped me of my savings and every asset I had."

The level of control Rob had over Vicki was even more apparent when he went away for work.

"I was 'not allowed' to call him, I could only contact him via Facebook Messenger. When he came home, he would go into every room of our house and move stuff around so I never knew where things were. He would also clean out the fridge and throw everything away.

"It was like he had to reassert his control over me and our home every time."

Another pregnancy soon followed their first baby and while Vicki initially believed she could change Rob, her focus soon turned to keeping herself and her kids alive and safe.

"I tried to leave him many times over the decade we were together but he always promised a fresh start and a new adventure.

"I see now that this was his way of isolating me from my community and every time we moved, we lost more and more money. At one stage he moved us to the Northern Territory, and I built a successful business and made friends. But as soon as he could see I was happy, he demanded we move again, and I lost everything.

"Sometimes he would buy or make me a gift then if he saw I liked it, he would break it in front of me. Anything I had or was proud of, he would destroy."

Rob's control over Vicki's money and her life was just the tip of the iceberg of his abuse.

"If that wasn't bad enough, the comedown was worse. While I was in physical pain, I also knew he would ignore me for days afterwards as I think he felt some shame about it.

"The only saving grace was that he was away so much for work, that when he would go away again, the kids and I had a reprieve from him."

Listen: Mia chats to Moo Baulch, head of customer vulnerability at Commonwealth Bank of Australia, about the invisible signs of domestic abuse. Post continues below.

The last time that Rob moved the family was for a job in Asia. Vicki decided on that trip in 2018 that she could no longer take it anymore.

"I left him there to come back to my hometown in NSW with our two kids, then aged 10 and nine-years-old. I moved in with a family member and Rob soon followed us home, pleading with me to stay.

"I almost considered it, but the next day on his birthday after promising the kids he would spend the day with them, he woke up early and took all my jewellery to a pawnshop and didn't comeback until night time. I had nothing left, and the next day I told him to leave."

Vicki and her two kids had to leave her family member's home but had nowhere to go.

"He had taken everything, including my dignity.

"We were homeless, and ended up living at a women's' refuge. I was so angry, I felt like I didn't belong there.

"I am educated and had previously held high-level jobs. I used to own a home and yet there I was, bundling up toilet paper to use as sanitary pads because I had no money to feed my kids.

"It was soul destroying."

While Vicki's two older kids had remained living with their father because of the frequent relocations in Australia and overseas, Vicki's youngest two were distraught.

"It crushed me every time they pleaded to stay somewhere, and we had to move on again. They had changed schools that many times. It was so disruptive.

"I had to jump through multiple hoops to receive financial help from the government and I kept being told to get a job - but without a residential address or rental history, it was a constant fight.

"I took knock-back, after knock-back and did anything and everything I could to ensure I had money to feed my kids."

Eventually, with help and support from Got Your Back Sista (GYBS) and by securing a transitional property through the Women's Housing Company, Vicki got a job and a permanent rental property. This was all the while dealing with her two distressed children and the effects of a global pandemic.

"Twelve months on and I am still going through it. Leaving Rob was just the start of my fight.

"My kids have social anxiety from moving schools so often but we now have a home and I have part-time work. I can't speak highly enough of the women at GYBS who helped me access an adult education course in retail that led to me getting a flexible job I love."

Vicki is currently fighting for full custody of her children through the NSW family court system after Rob took them unlawfully to another state without telling her.

"He now has a new job and a new partner and until recently, he hadn't spoken to the kids in two years. He pays less than $10 per fortnight in child support.

"I believe our fight in the courts is nothing to do with wanting the kids, and is more about the fact I know his secrets and he is angry. He is using this process to continue trying to destroy me and my dignity but I won't let him."

On New Year's Eve 2020, Vicki sat down and wrote a list of resolutions that she wanted to achieve in 2021.

"On my list of goals for the year was to take the kids on a family holiday in Australia, to buy a car and I wanted to write a cheque for GYBS to give something back for all their amazing work.

"I wrote a cheque for $1150 for GYBS, I took the kids on a three week camping holiday and I purchased a four-wheel drive. I did it on my own and I am so proud that I made it happen."

Vicki's determination to move on with her life combined with the help of a supportive network has kept her going through some incredibly tough times.

"If I just keep breathing and waking up each day, I know that we women are capable of anything.

"If we support each other, we can move mountains."

The United Nations is marking the 16 Days of Activism against Gender-based Violence from 25 November to 10 December 2021, under the global theme set by the UN Secretary-General’s UNiTE campaign: “Orange the World: End Violence against Women Now!”

*While the persons are known to Mamamia, names have been changed for privacy reasons.