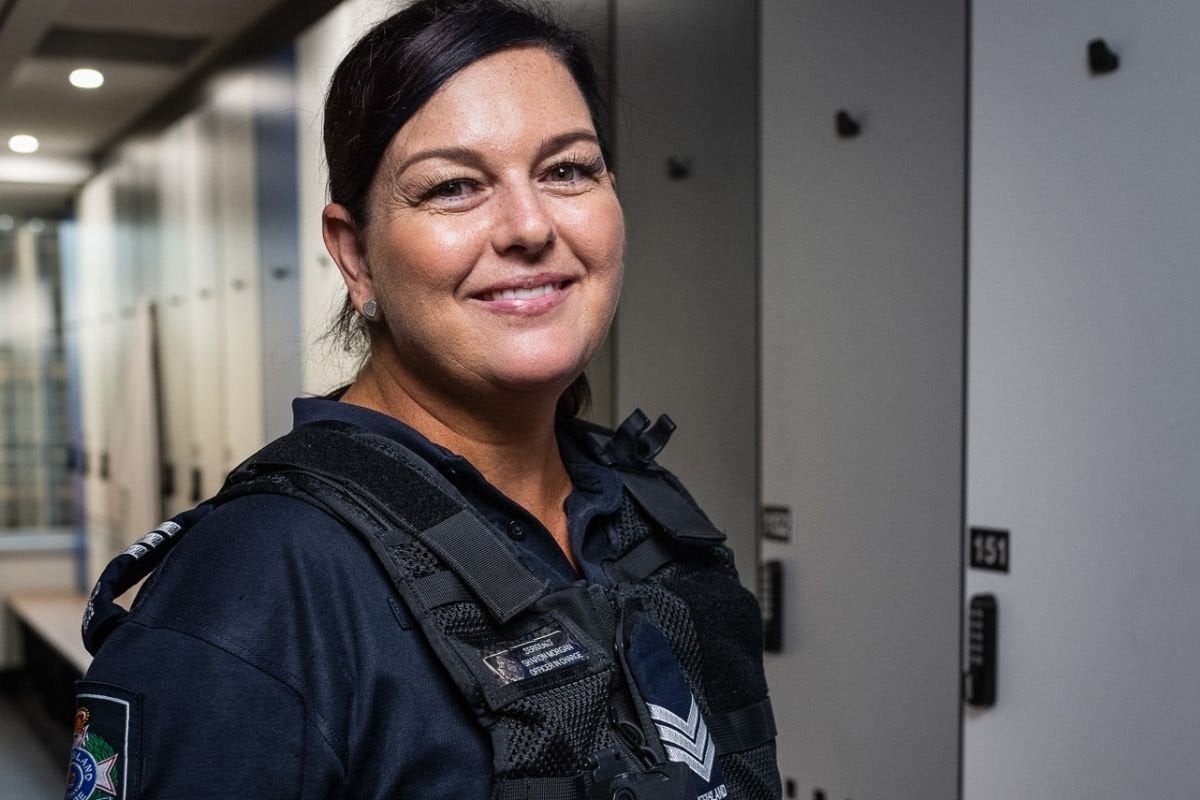 This post deal with domestic violence, and could be triggering for some readers.

Every day Sharon Morgan would turn up on doorsteps across Queensland and tell the frightened women inside, "it's okay, we can protect you, we can help you."

There was one particular job where she arrived to find a woman in her 60s whose husband had been locking her in her room for a decade.

It was a long, exhausting afternoon untangling years of violent, abusive behaviour.

Her uniform was ripped from her body for daring to get home so late and for not having dinner ready.

As she watched the buttons on her Queensland Police Service blouse pop off and fall to the ground she thought to herself, "I've just been to a job like this today, and now I'm coming home to it."

She'd been coming home to it for years. But just like the hundreds of women whose doorsteps she arrived on, Sharon didn't ask for help because she was afraid of the judgement. She was ashamed she'd stayed in a violent relationship for so long, and the truth was  — like so many victims of domestic violence — she couldn't afford to leave.

Sharon met Andrew* when she was in Year 11 at high school.

She'd had a sheltered, wonderful upbringing, describing herself as the "prim and proper" private school girl who fell in love with the bad boy.

He was a good-looking tradie with blond hair and big muscles, and just that little-bit older than her — she was infatuated.

She moved in with him after just three months, and that night — their first in their new home — he hit her for the first time because she asked him to smoke outside.

Thinking it was a one off, she let it slide. But pretty soon she was being bashed every second day, having her hair pulled and being spat on.

"All the tick a box things that you hear about domestic violence, that was me in a nutshell," she told Mamamia.

Sharon had always wanted to join the police force, and she wasn't going to let what was happening to her get in the way. She applied to the NSW Police after graduating school, but while waiting for her acceptance letter she fell pregnant with her son, aged 18.

The dream would have to wait.

The cycle of abuse.

Being spat on hurt the most. It was worse than the physical blows.

"I just never forget just feeling so demoralised and so degraded... the warmth of it on my face," Sharon told Mamamia.

Over the next few years, she was subjected to a cycle that she would eventually recognise in the jobs she would attend in uniform.

He would hurt her, and then turn around and blame it on stress, or his father or drugs or her. It was more often than not her fault for back-chatting, he'd tell her.

It wasn't just physical. It was financial, sexual and emotional abuse. He controlled her money and how she spent it, and over the course of many insults and many years, made Sharon feel ugly, small and insignificant. 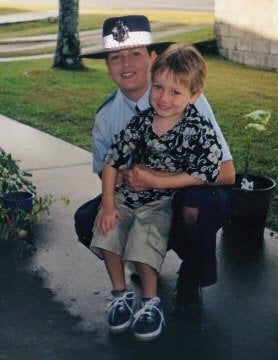 The second child had arrived 14 months after the first. When she was two, and her eldest was three, Sharon mustered up the courage to leave the first time.

"My mum came to visit, and for the 10 days she was there I didn't get spat on or belted or called a 'fat ugly bitch.'

"But mum said to me 'what's wrong with you? You're so different, you're so frail.'"

One night while Andrew was at work she told her mum everything, and at her mother's insistence, Sharon packed her bags and followed her to Queensland under the guise of helping her with her recently diagnosed rheumatoid arthritis.

"I got on the train thinking the whole time he's gonna rip me off this train before it takes off. I was just petrified," she remembered.

In Queensland Sharon was able to find their feet. She walked into Centrelink and told them "I want to be a police officer."

She was pointed in the direction of a two-year bridging program to once again pursue her dream and was accepted into Queensland Police on her first application.

But in the meantime, Andrew had moved to Queensland and back into Sharon's life.

"I was in the police a year before I finally had the courage to leave."

When Sharon was sworn in, she felt liberated. She'd achieved her lifelong goal of becoming an officer, and she'd done it all on her own.

At work she felt powerful and helpful, but at home she was a victim. Every day that she put on her uniform, she was forced to face her own reality staring back at her. Because in the force, domestic violence jobs are not just common, they're constant. 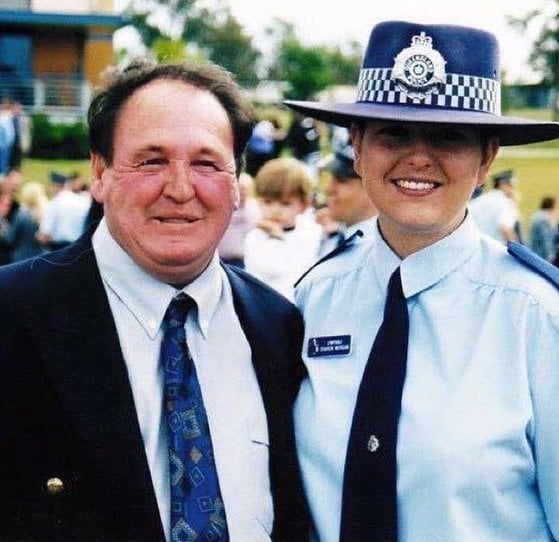 Sharon with her father the day she was sworn into the Queensland Police Service. Image: Sharon Morgan.

"I felt so weak, because I would be going to these jobs — some of them horrendous  — and I was thinking, 'this is me. This is my life.' And here I am being a hypocrite saying 'we can protect you' all while I was going home to it," she told Mamamia. "It was extremely triggering."

In the back of her mind, Sharon knew she'd eventually get away, but it took a dramatic escalation of violence eight weeks after the birth of her third child, for that to finally happen.

She'd finished work for the day and was folding washing. Drinking a cup of coffee Andrew sauntered over, agitated. He'd been following her patrol car again — he didn't like the (male) partner she'd been working with that day. He didn't like how often she worked with him.

"Leave me alone, I've been at work all day. I'm trying to fold the washing and get the kids ready for dinner, just stop," she told him.

Next thing she knew she was covered in hot coffee, but as she blinked through the pain, she realised her middle child was also injured.

"It splashed her and then of course I'm screaming, she's crying. He just did not even care," Sharon told Mamamia.

In the distance, as he continued to rage, Sharon could hear sirens. Someone had called her colleagues.

A domestic violence order was put in place, and even though the next five years were marred by breaches and threats, his control over her was broken.

"If it wasn't for that sergeant (who arrived on the scene that day), I'd probably be a statistic," she shared. "He took me under his wing, and he supported me. He was the catalyst to help me move on."

Now, Sharon is that sergeant for others.

"I know how the victims feel."

When Sharon tells a victim of domestic violence she understands, she means it.

She understands the feelings of shame, the fear and the reluctance to accept help. She gets that it's not black and white and it's not a case of "just leaving."

She wants victims to know they have more resources and legislation at their fingertips than ever before.

"Even though my story is awful, [it has allowed me] to do my job better," the now 47-year-old told Mamamia. 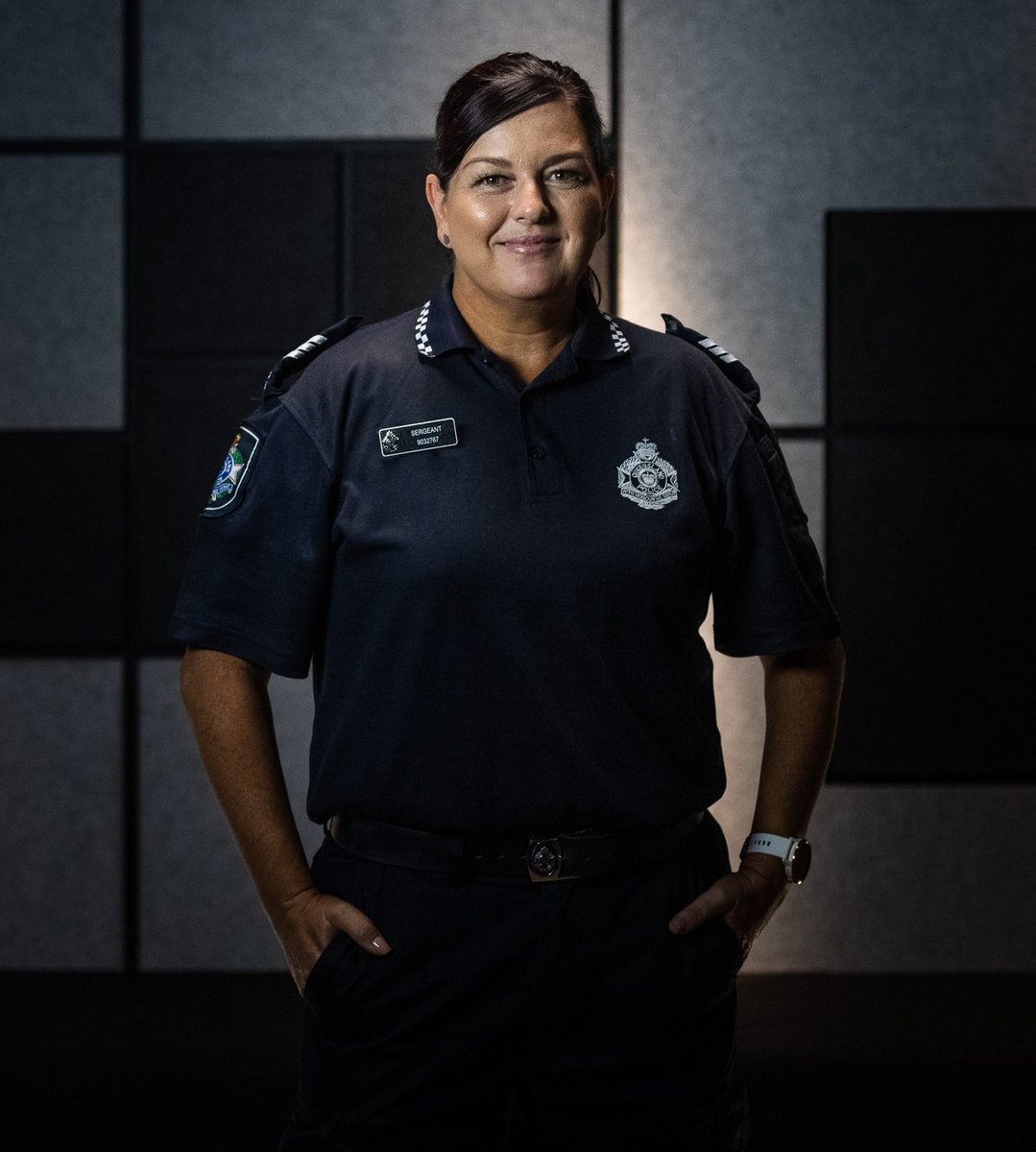 Sharon is living her dream, and using her experience to help others. Image: QLD Police.

Sharon is the Sergeant in Charge of Gin Gin Police station in regional Queensland. She's married to a lovely man, and has three thriving adult children.

She's happy and healed and she will continue to use her experience to help others.

Everything she has learnt, experienced and survived has made her the police officer she is today.

In fact, it's her biggest asset. It's that intimate knowledge that has allowed her to transform the lives of women living in abusive relationships, and give them the tools to build the futures they deserve.

Queensland Police is currently recruiting. They believe, more often than not, it's what's inside that makes an incredible officer. If you think you've got what it takes, head to policerecruit.com.au.

Reply
Upvote
I hope she becomes a trainer for the Qld police, because unfortunately I've had a couple of friends' relatives and acquaintances have terrible experiences with them in recent years in how they've handled domestic abuse cases - it's felt like Queensland has been years behind some of the other states in terms of their police's attitude towards those women trying to get away from abusive partners.
P
pinkplane 6 months ago