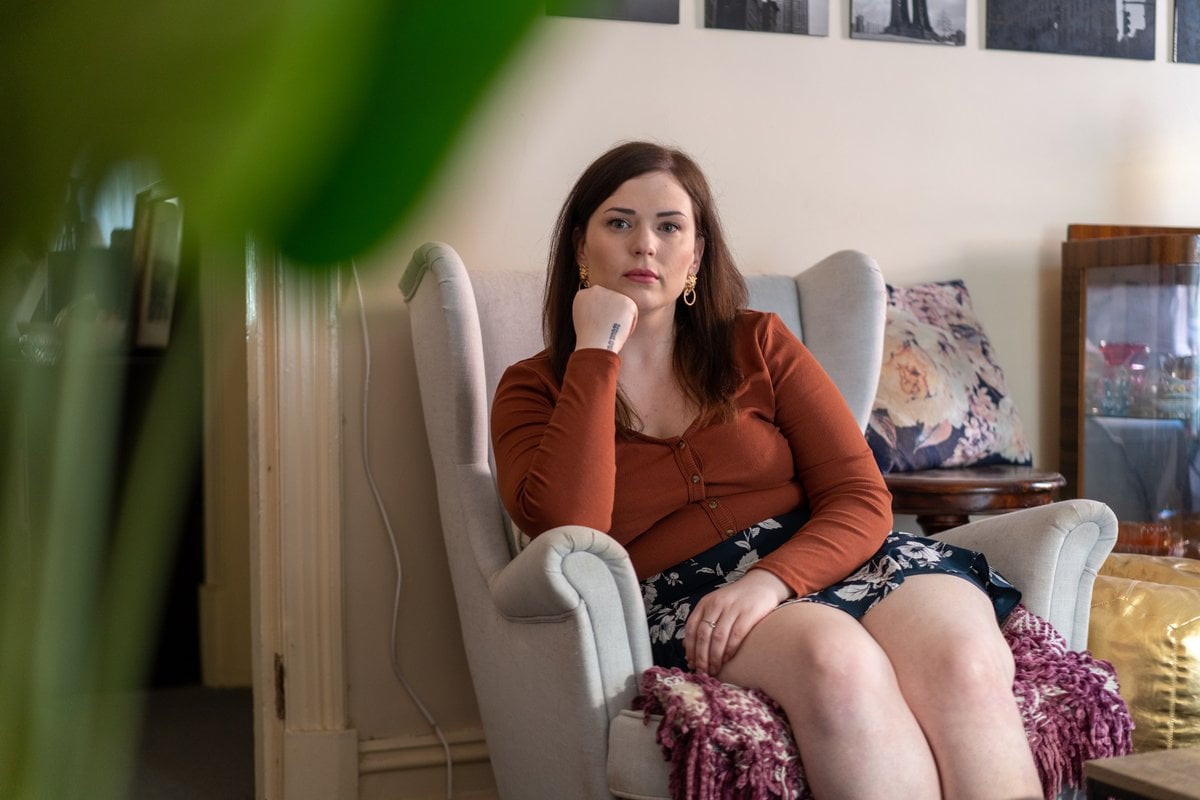 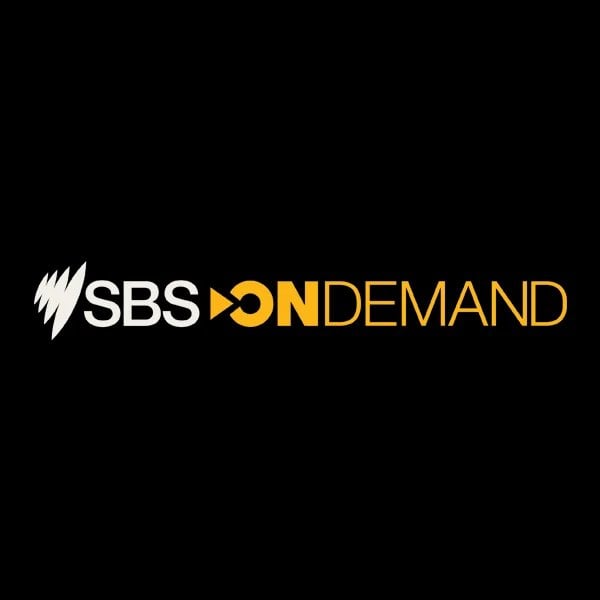 Thanks to our brand partner, SBS on demand

While we’ve been navigating a worldwide pandemic, arming ourselves with masks and vaccines and socially distanced safety, Australia has continued with its silent battle against another epidemic: domestic abuse.

As citizens crept back indoors for an unprecedented amount of time in lockdown, many found themselves trapped with their abusers, with the situation getting darker and more dangerous as days ticked by.

And for many, one woman a week on average, this darkness and danger resulted in death.

That’s one woman a week too many for us.

But what do we do about it? While it may be easy to say men (who are the main perpetrators of family violence) are to blame and they need to fix the problem, that simply won’t work. Unfortunately, it’s a burden that falls on all of us.

We need to educate, understand, unpack and watch for the signs to stop this danger in its tracks and prevent another death. But identifying these signs is seriously tricky.

However, a new documentary covering first-hand stories from survivors, victims and their families has shone a terrifying light on what is going on behind so many closed doors in Australia. And it has outlined the warning signs for us.

It’s called See What You Made Me Do and it's based on extensive research by Australian journalist Jess Hill, published in her book of the same name. The series follows individual cases of women and covers shocking statistics around domestic abuse.

The show opens with a chilling phone call made from an abusive man who rings the police to report the death of his ex-partner, who he has just murdered.

You can listen to the harrowing recording in the trailer for See What You Made Me Do, right here.

This absolutely sets the tone for the rest of the series. It completely smashes the stereotype we so often assume: that abusive partners will be angry, loud and raging men. Who blackout with fury. Who can’t control their outbursts.

But that’s rarely the case. In fact, it’s not a lack of control but an expression of control which manifests as domestic abuse. Too often it takes the form of 'Coercive Control', verbal, emotional, financial, even technological abuse. Controlling behaviours almost always precede violence. It's the gateway tactic to destroy women’s lives.

In See What You Made Me Do, survivor Jessica Nitschke describes meeting and starting a relationship with her abuser.

She was living and working in Melbourne, and loving life. She thought she'd give dating apps a go and so downloaded one and started swiping. Within 10 minutes she had connected with her abuser.

"He would end up completely destroying my life."

When Jessica went on her first date with her abuser, she says he came across completely normal – and, if anything, a little boring. But they had a lot in common. A similar taste in art and culture, studied the same things at university, had mirroring social values.

Jessica now understands her abuser likely trawled through old social media pages to gain an understanding of her career and then feign interest in similar goals.

Quite quickly they were messaging every day and spending an unfathomable amount of time together. While she tracks the early days with screenshots of WhatsApp messages – some of which you can see during the See What You Made Me Do episode – we want to focus on the warning signs that Jessica says she can now identify, but that she definitely missed in the moment.

Listen to The Quicky episode that every man should listen to. Post continues after podcast.

"It started with small acts of service, I guess. Getting me to make him a cup of tea when he came over while he rested. Saying how he preferred me to 'groom' myself in terms of waxing or plucking. He demanded keys to my apartment. He would just pick up my phone and read my messages. He insisted on knowing where I was all the time. And who I was with."

Then one day he sent her a random link to 'check out' on WhatsApp. 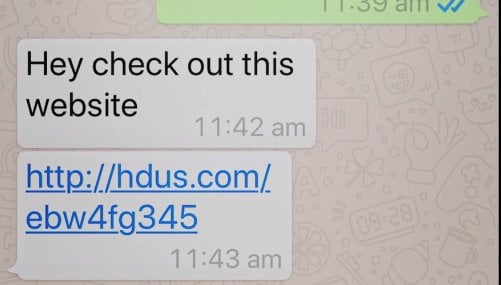 The link went to a blank page, and he never wanted to discuss it again after that. Jessica knows now this was probably when her abuser installed spyware on her phone, so he could track every movement and potentially read every message she sent or received.

Then, to add insult to injury, the acts of service got significantly larger.

Jessica says he would bait her with arguments late into the night and then he would say, "'I'm going to run late for work now because we were up so late talking. Can you give me a lift?' And then it would change into things like, 'Oh, if you could loan me your car a couple of times that would make things even easier.' Then he told me I needed to walk to and from work, and I wasn't able to drive there anymore."

He then became controlling over her body. It began, like so many other toxic parts of their relationship, with a text.

"That's when he started weighing me, and restricting me to eating 500 calories a day, otherwise he would get upset and there would be consequences to that."

In terms of physical violence, Jessica explains in the show he "only needed to use it at the start," and that alone established an atmosphere of fear.

He paired this threat of a violent situation with restricting her food intake, starving her and depriving her of sleep by calling or showing up at all times of the night made her "weaker and more vulnerable" by the day.

Her abuser then turned these actions against her, telling her that because he was spending so much time with her, he needed to skip shifts at work. That was when he requested money from her, as a financial compensation so he could 'spend more time on her'.

"And I ended up agreeing to that." 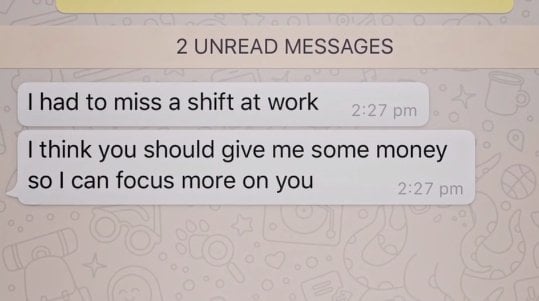 Because Jessica's abuser built up this behaviour, bit by bit over months, it convinced Jessica that these things were normal and not extreme – even though they were. In fact, she took the blame for almost everything and found herself continuously apologising to him.

The ability that Jessica's abuser had to infiltrate her life, her finances, her self-esteem and her health gave him all the power.

"He had control over my mind, and you can't escape your mind. You're trapped."

Jessica ended up in a psychiatric hospital and her Mum, Lisa, raced to her beside. Without her mother's support, Jessica does not believe she would have survived the ordeal.

While Jessica is no longer in that abusive relationship, two years after the call to her mum she still can't return to work full time and fears she'll never be open to a relationship again because the thought of building trust with someone seems an impossible feat.

In See What You Made Me Do, Jessica admits the hard thing is that the signs of abuse sometimes match the signs of infatuation, and of someone showing interest. And that's partly why domestic abuse signs can be so tricky to identify.

However, as devastating as Jessica’s story is, there are key takeaways from it we can use when trying to prevent history from repeating itself.

Coercive control warning signs to look out for as a victim:

It's a terrifying space to navigate and warning signs can be blurry or incredibly well-hidden, but as more conversations happen with more people proactively looking, more women can and will be saved.

To educate yourself further on this topic, head to SBS On Demand now to stream free See What You Made Me Do.

See What You Made Me Do is a new 3-part SBS documentary series that explores one of the most complex and urgent issues of our time – domestic abuse. Presented by investigative journalist Jess Hill, this series examines the fine lines between love, abuse and power. Stream Free on SBS On Demand

Reply
Upvote
The hard thing is they often love bomb you at the start and seem so nice, concerned, understanding. But once you fall in love with them and begin to intwine your life with theirs, then the abuse and control begins. It wasn't until 6 months in that my ex showed his true colours but we were already living together by then. So leaving was a harder option than if I had my own place.
Moving in too quickly is probably another red flag.
M
mamamia-user-893622181 a year ago

Reply
Upvote
1 upvotes
I think what is really important to mention too is how important it is to have someone who listens to your concerns. I stayed in a relationship for far longer than I should have because the person I voiced concerns to told me it was in my head. Those early warning signs are so critical
News
General
Opinion
True Crime
Politics
Sport
Explainer
Entertainment
Celebrity
Reality TV
Movies
TV
Books
Rogue
Royal
Lifestyle
Beauty
Fashion
Weddings
Home
Wellness
Health
Fitness
Travel
Food
Family
Before The Bump
Pregnancy
Baby
Kids
Teens
School
Parent Opinion
Work & Money
Money
Finance
Career
Lady Startup
Relationships
Sex
Dating
Separation
Friendship
Family
Real Life
Couples