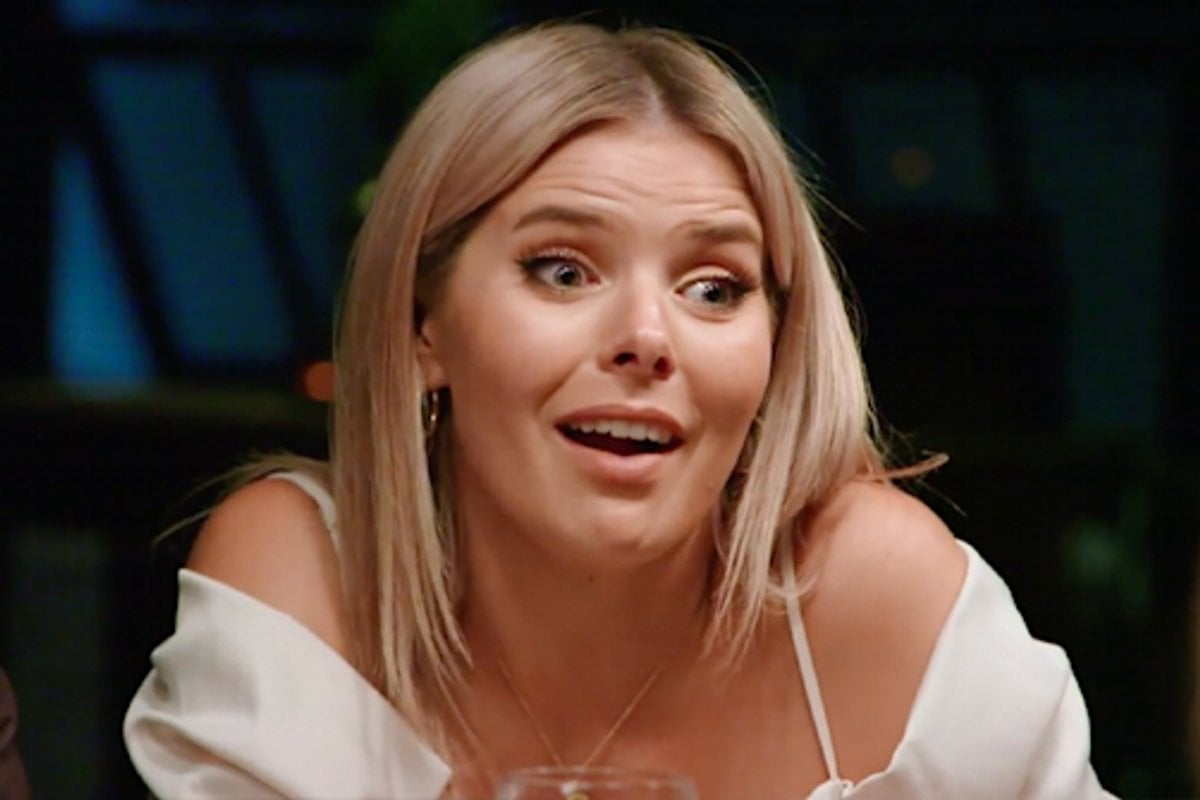 The name Olivia now evokes a physical response from me.

I feel my muscles tighten. My heart rate increases. My teeth clench.

It's anger. I feel an unbelievable amount of anger towards a woman I have never met and I am unlikely to ever cross paths with.

The Olivia in question, a contestant on this season of MAFS, hasn't done anything to me personally. And in my rational mind, I know that the real Olivia might not actually bear much of a resemblance to the Olivia we're seeing on screen.

After all, she's a highly edited character on a reality TV show that creates caricatures of its contestants and incredibly dramatised plotlines out of their interactions with each other.

And she's a bloody good plotline. Her victim to villain story arc has garnered unbelievable ratings for Channel Nine. It's spurned thousands of memes and tweets. And it has inspired countless opinion and think pieces (including this one).

In case you missed it, Olivia quickly became one of the most talked about contestants of this season after she had a heated argument with fellow contestant Dom during the girls' night at the couples' retreat. During the argument, Olivia bated Dom until Dom smashed a wineglass on the table.

Olivia then told the rest of the contestants that Dom waved the smashed glass in her face. Footage of the incident disputes this.

When Dom later apologised for her actions, Olivia refused to accept it. This situation was our first glimpse of the real Olivia, her worldview and her motivations.

The tension between the two contestants has continue to escalate over the past couple of weeks. Throughout this time, Olivia has referred to Dom as "white trash", "trash", "that thing".

She said that she doesn't associate with people from Dom's "class" and has repeatedly made comments about how they're from different "classes".

She said she will hate Dom for the rest of their lives and would "burn her at the stake".

Then at Wednesday's cocktail party, Dom was told that everyone else at the table had seen a naked photo of her that she had previously uploaded to her OnlyFans account.

It later came to light that Olivia had found the photo and shared it with the other contestants.

It quickly became clear to Dom, Jack, the experts and the audience that this was a plot to undermine Dom and Jack's relationship and to sl*t shame Dom.

And a plan to wind Dom up again.

But while this was clear to those of us watching the scenario play out, most of the people at the table sided with Olivia. Even when she said that Dom "deserved it", implying that because Dom had shared naked images of herself online, she deserved to be shamed.

And treated as though she is below Olivia and the rest of the women at the table.

Putting aside for a second that by sharing the photo Olivia was breaching OnlyFans terms of use and also breaking the law, this behaviour displayed an alarming escalation in her grudge against Dom.

Olivia, at this point, will stop at nothing to tear Dom down.

And this situation feels all too familiar to any woman who has ever been bullied, belittled, singled out, shamed, or excluded by other women.

At this point, for me, and I'm sure many other MAFS fans, Olivia represents much more than a character on a reality TV show that we'll forget about in three months' time.

LISTEN: The worst moment from the MAFS Nude Photo Scandal. Post continues below.

Olivia represents every woman who has ever looked down on us.

Every woman who has ever dismissed us.

Every woman who has ever judged the way we look. Or the way we sound. Or the clothes we wear.

Every woman who has ever made a comment about where we grew up. Where we went to school. The things we had to do to survive.

Every woman who has made us feel like we're not good enough.

Every woman who has told us there's only one acceptable type of woman and we're not it.

Every woman who has seen our confidence and done their utmost to destroy it.

It's difficult to watch Olivia tear down Dom because most women have been in Dom's shoes at some point in their lives. And most of us didn't have the entire nation watching the situation as it played out or the words to describe what was happening to us. Or the strength to defend ourselves.

Most of us just had to endure it and then slowly build ourselves up again.

Dom should be incredibly proud of the way she has weathered this storm. She has unintentionally opened up an important conversation and has become the poster girl for women being unapologetically themselves.

As for Olivia, there's probably a lot of self hatred underneath all the vitriol and perfectly executed takedowns. We can only hope she learns from this experience.

Going forward, we must remember to stand up for the Doms of this world and to see the Olivias for who they really are.