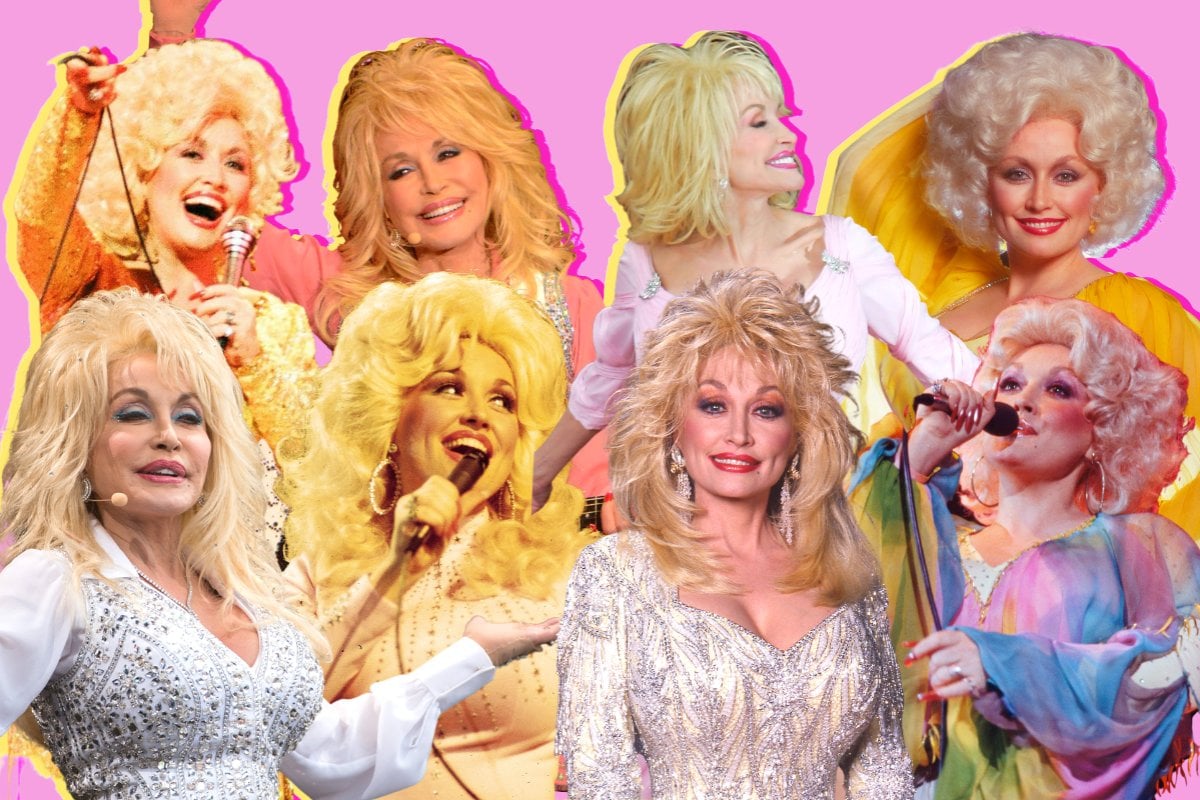 "Everybody dreams of killing their boss," Dolly Parton jokes down the line at 3am.

'What a strange thing to be happening to me,' I think in response. Here I am, when everyone else is asleep, talking to one of the most beloved entertainers in the world about fantasised murder.

Time zones are complicated, and trying to tee up appropriate interview times with people overseas is often a futile practice. But when Dolly Parton is only available in what is, for you, the middle of the night, you set 14 alarms and you damn well get up. Because she is Dolly Parton.

Watch: Dolly Parton's 9 to 5 musical is arriving in Australia in 2022. Post continues below video.

My phone rings, and after the usual 30-second rundown with a publicist, Dolly is on the other end of the line.

"Hey girl," she says, in that warm, friendly Southern drawl. "How are you?"

It soon becomes crystal clear the Dolly I'm talking to is exactly how I'd imagined her to be. She drops Dollyisms ("You know me, I wake up every day with a new dream!") and laughs at herself. She is humble and at the same time, perfectly comfortable accepting my gushy compliments. She doesn't miss a beat. There are no pauses to gather her thoughts. Everything she says sounds off the cuff, in the best, most Dolly way.

I start by thanking her for taking the time, and she hits me with a joke straight away: "Well, thank you for having me. You know me, I'm always out there promoting something!"

She's right. Right now, she's working on her first novel with fiction legend James Patterson, as well as an accompanying album with songs inspired by the story. She's also released a sell-out fragrance, Scent From Above. And then there's promotion for the upcoming Sydney production of the West End hit 9 to 5, featuring the musical score she wrote based on the 1980 film of the same name. 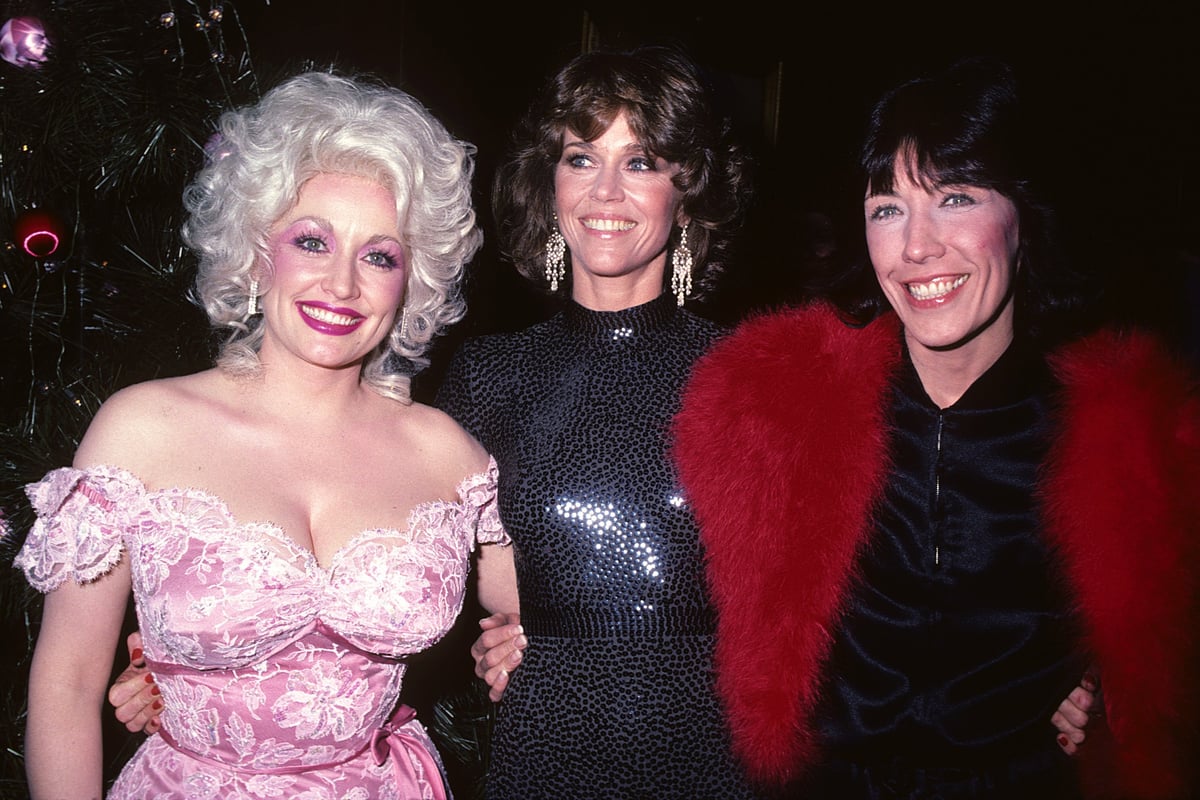 She's been constantly busy for decades, and that's how she likes it.

Dolly was already an established entertainer when Colin Higgins and Patricia Resnick wrote the screenplay for 9 to 5 with her in mind. In the 1980 film, Dolly plays Doralee Rhodes, a secretary who is continually sexually harassed by her boss.

Doralee is constantly underestimated and undervalued. She's a busty, blonde woman who enjoys dressing up. Those around her find it hard to look past those traits, which society has attached certain connotations to.

That was a theme in Dolly's career too. For a long time, she was thought of as the butt of the joke. Her body is one of the most scrutinised in modern history. Yet, she hasn't shrunk herself to be respected. She's openly discussed her plastic surgery. She's never apologised for who she is.

What people didn't consider was that Dolly was not only in on the jokes, but she often made them herself. "It costs a lot to look this cheap" is one of her most famous quotes, after all. 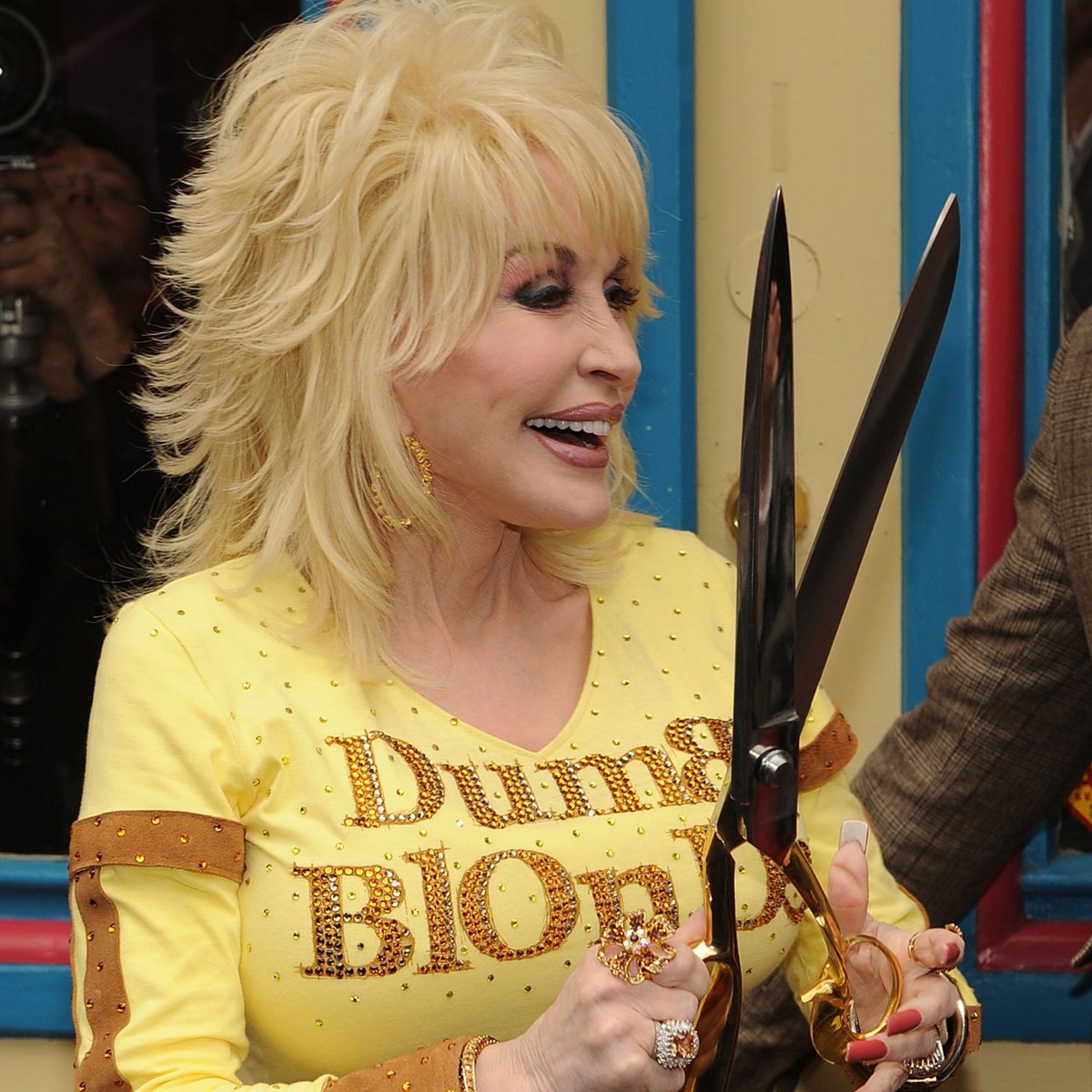 Yup, she's definitely in on the joke. Image: Getty.

In a time where women were continuously patronised or sold short, Dolly's decision not to compromise any part of herself was radical. Along the way, people realised there was simply no way they could not take Dolly seriously.

"I never really felt like I had to overcome myself, overcome anything," she says, reflecting on that journey. "I just dressed the way I wanted to dress. I knew what I knew, and knew what I don't know too. I never got into territory that didn't feel comfortable and try to pretend I was something I wasn't.

"I just always tried to be my best self, just to be a good person and be friendly and warm and care about people and I wanted to be cared about. But it never bothered me so much what other people thought of me as much as it did what I thought of myself. And so I've always tried to stay true to my principles and values. I know I look artificial and fake, but I'm really not."

She quotes a line from her song 'Backwards Barbie', featured in the 9 to 5 musical: "Don't be fooled by thinkin' that the goods are not all there."

"You can't judge a book by looking at the cover all the time," she tells me. "So anyhow, I go about my life, being who I am, doing the best that I can and trying to help other people, if they need my help, and there's some way that I can help them. But I think we all have our own journey and I'm just trying to make the most of mine and do as much good as I can along the way." 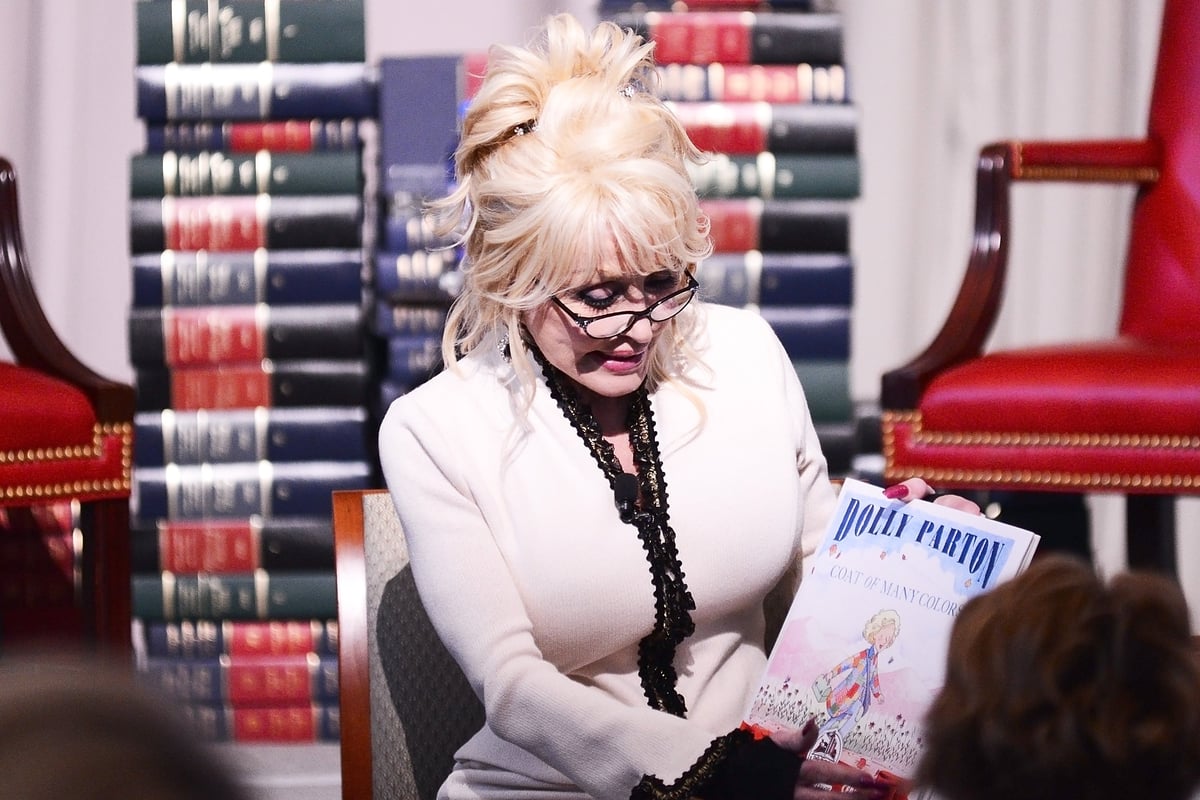 Dolly Parton reads her book, The Coat of Many Colours, to Washington, DC school children to commemorate Imagination Library donating its 100 millionth book in 2018. Image: Getty.

That answer explains everything that has established Dolly as such a beloved public figure. Despite all the successes and the fame and the fortune, Dolly is perhaps best known for her kindness. She tells me while she's proud of all the awards and dreams come true, the thing she is most gratified by is her literacy program Imagination Library, which has gifted more than 100 million books to children worldwide.

There are too many other causes to list. The most recent, oft-cited display of Dolly's 'goodness' was her $1 million (AU$1.325m) donation towards research at Vanderbilt University Medical Center at the beginning of the COVID-19 pandemic, which ultimately helped in the creation of the Moderna vaccine.

As a result, everyone loves Dolly Parton.

She transcends boundaries: political, social and generational. She gives a joyful, deep laugh when I tell her I had seen equally enthusiastic reactions from my 58-year-old father and my 22-year-old brother when they learned I would be speaking to her. In fact, one of the front page results when Googling her name is a New York Times article about how, in an increasingly divided world, Dolly is one of the only things everyone can agree on. 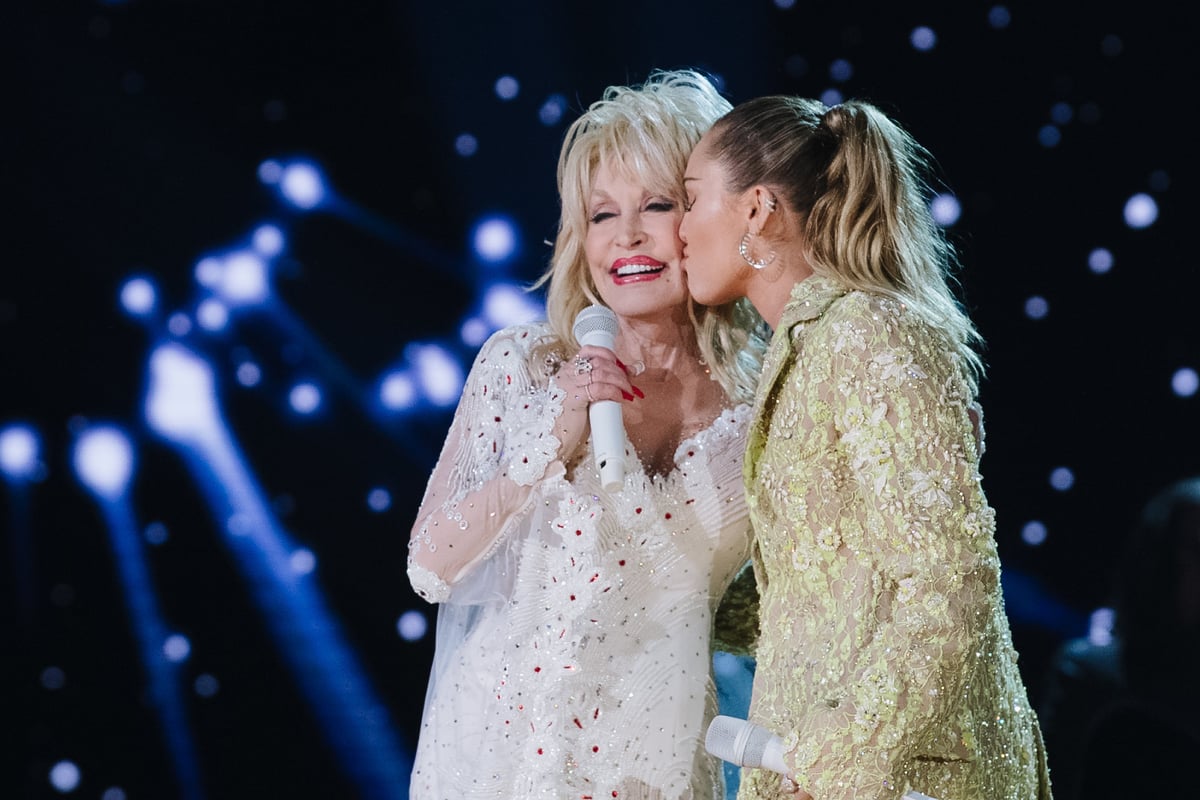 Millennial and Gen Z audiences got to know Dolly during her appearances on Hannah Montana. She is Miley Cyrus' godmother. Image: Getty.

"It's important to me to try to bring people together if I can," she explains.

The propensity to hate or attack feels unavoidable in our highly reactive, very online world, and she wants to be someone who counters that.

"It doesn't have to be that way. If we just learned to give a little bit and care a little bit more and try to help one another a little more, instead of being so caught up in our own things that we can't see past what our own thoughts and beliefs are," she says, adding that all she can do is offer a good example.

"I'm not out to tell people how to live, we all have our own journey. We're all here for a reason, we all have to figure out the best way to find our greatest potential."

She doesn't quite understand the 'Dolly Parton appeal' that makes her example so impactful, but that doesn't mean she can't enjoy it.

"It makes me feel good," she laughs. "I think people just kind of grew up with me, and I really think that I feel like a family member. I feel like an aunt or an older sister, some favourite relative. And I just think people can relate to me that way. I can't understand it all, I'm grateful for it though."

She shares that comforting familiarity with the 9 to 5 story. Dolly's career is intertwined with it. She starred in the film, with its theme song becoming one of her most iconic songs. All of the music in the stage version is her own. The essence of Doralee, the character, is her. So there's no surprise that it's become such an enduring, loved tale.

Dolly began her career in show business by writing songs for other artists in Nashville. She signed her first record deal with Monument Records in 1965 when she was just 19, and started out as a bubblegum pop singer. It wasn't until a year later, when a country song she had written for Bill Phillips went to number six on the US country chart, that she was allowed to do what she'd wanted to since the beginning: country music. 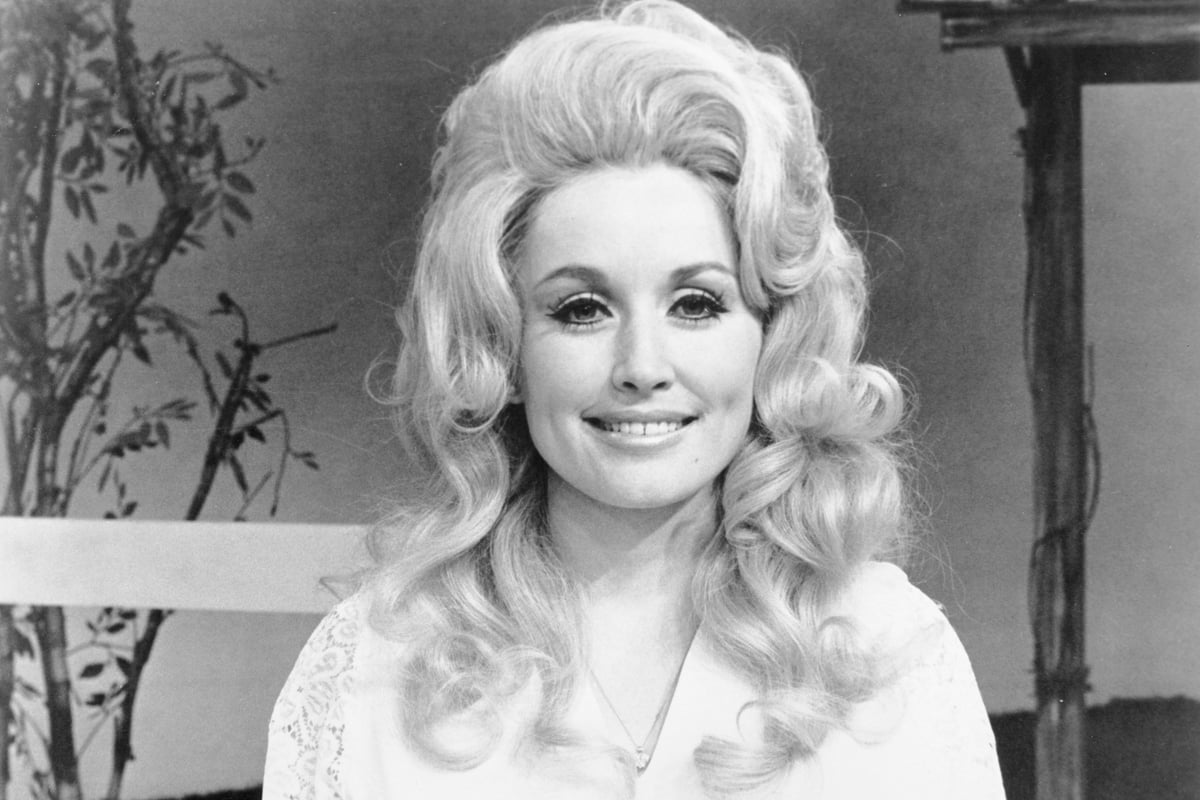 She had a string of hits with country music entertainer Porter Wagoner, but she didn't have her first major hit until 'Joshua' went to number one in 1971. That was the first domino in a long line that included 'Jolene' in 1973.

By the late 1970s, Dolly was a certified megastar.

At the time, many were surprised that Dolly had such a fervent female fan base. The idea that a woman would look like Dolly for anything other than the male gaze was an impossible thought, so why would other women like her? Then, in 1979, rock journalist Gerri Hirshey spoke to a fan who explained her wide appeal in just a couple of sentences.

"I'll tell you why I love her," the Wisconsin housewife said. "Dolly is everything I never dared to be. Sure, she's outrageous looking. But just once, didn't you ever want to do something outlandish — without worrying what everyone will say?"

That's also the story of 9 to 5 - an outlandish, funny tale of three women who live out their fantasy of overthrowing their sexist, hypocritical boss. There's also the fact its themes - equality, equal pay and flexibility in the workplace - are still big issues that women are dealing with today.

"It was a good subject that needed to be addressed. I think it did a lot of good, but it also handled it in a way that was entertaining. It had a little bit of fun and a few twists - like everybody dreams of killing their boss," she jokes. 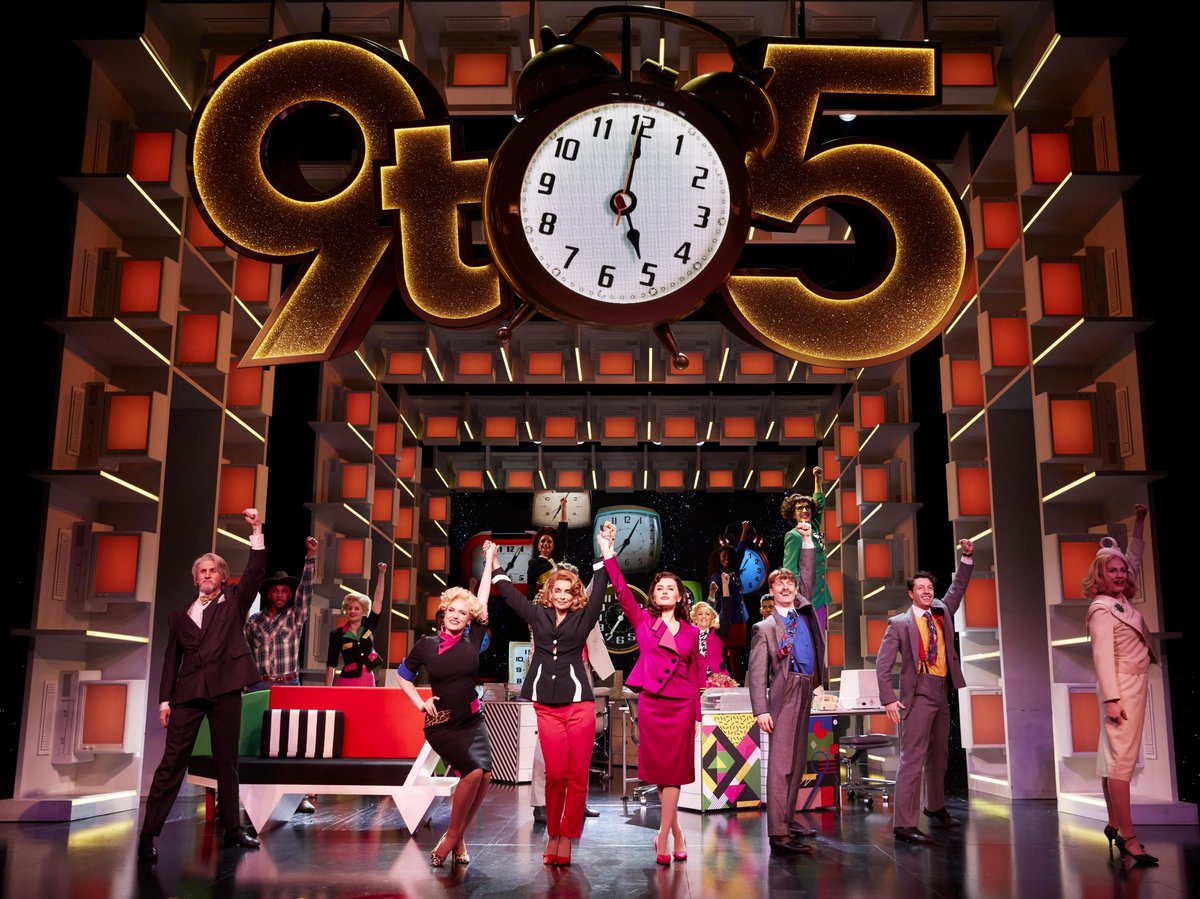 While Dolly is not physically on stage during the musical, her influence is everywhere. It's the very reason she's conducting interviews to promote a version of the show taking place halfway around the world.

Dolly promises the show to be uplifting and funny, and I believe her wholeheartedly.

I had a 15 minute conversation with Dolly Parton, over the phone, in the middle of the night, and 'uplifting and funny' is exactly how I'd describe everything about it.

"Your audience is gonna love this show. It's uplifting, it's funny, it's got a lot of comedy, great dancin', great singin' and a great message.

"I just want to invite everybody to come on out and be part of something fun," she says.

And who are we to deny her? After all, she's Dolly Parton.

9 to 5 is coming to Sydney's Capitol Theatre from February 16, 2022. Tickets are on sale now. For full details, visit 9to5themusical.com.au.

Reply
Upvote
1 upvotes
I had the great delight of seeing ‘ 9 to 5 the musical’ on the West End in early 2020 (pre-Covid) and i would say it has more heart, more depth and more pathos than the movie version. But isn’t that Dolly Parton personified! I’m definitely seeing the Sydney version!! I can’t wait!!

Reply
Upvote
@suz m I'm going have to keep an eye our to see if it comes to Melbourne, it sounds fantastic!
H
hellb 3 months ago