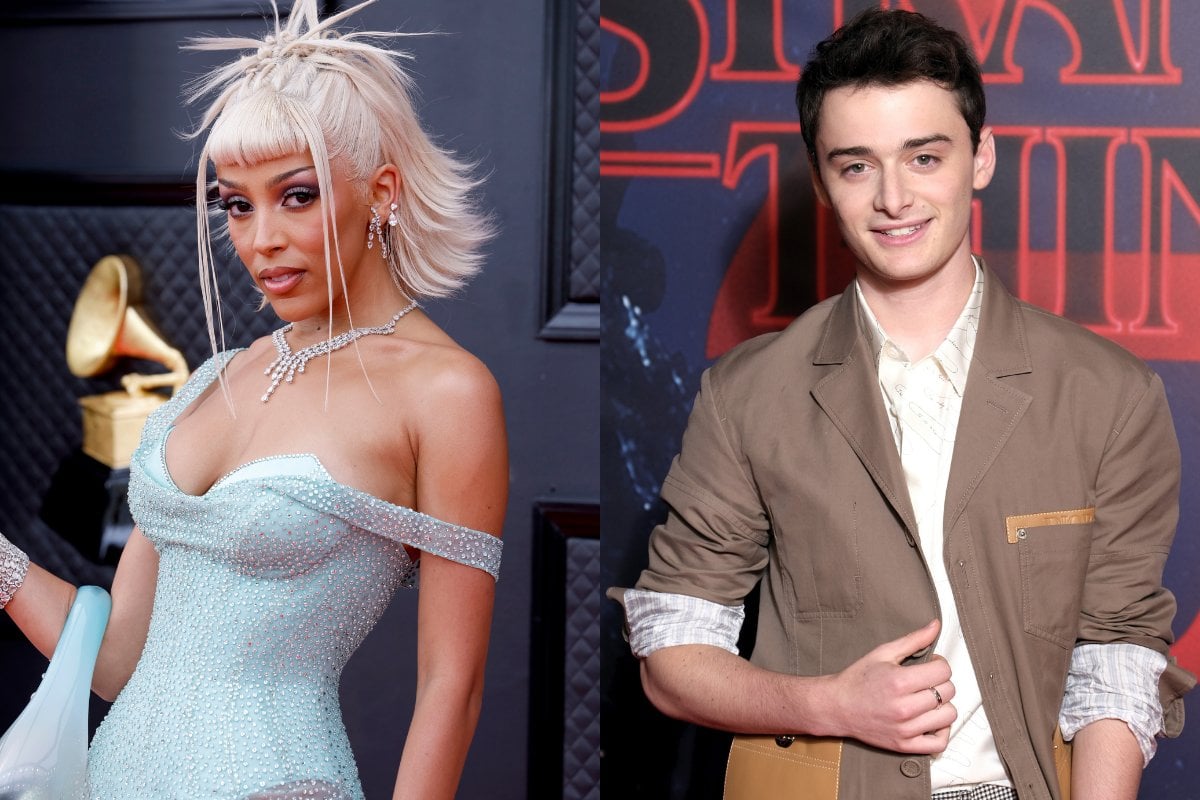 Earlier this month, a whole lotta drama went down between two people none of us ever thought would cross paths, let alone be in an argument.

Let's start at the beginning (and bear with us).

Before we get into it, watch the trailer for Stanger Things season four (if you haven't seen it already). Post continues below.

In early July, Stranger Things' actor Noah Schnapp (who plays Will Byers) shared screenshots of an Instagram direct message conversation between him and the American rapper-singer Doja Cat - with his 26 million TikTok followers.

In a now-deleted video captioned "thirsty Doja", it shows the 26-year-old singer asking Schnapp, 17, to tell his co-star Joseph Quinn to message her.

Quinn, 29, plays Eddie Munson on the show, and Doja Cat has also previously tweeted about him.

"Noah can you tell Joseph to HMU?" Doja wrote in the Instagram messages. "Wait no. Does he have a GF?"

"Slide into his DMs", the actor wrote back, but Doja Cat said she couldn't find his Instagram before Schnapp shared a link to it. 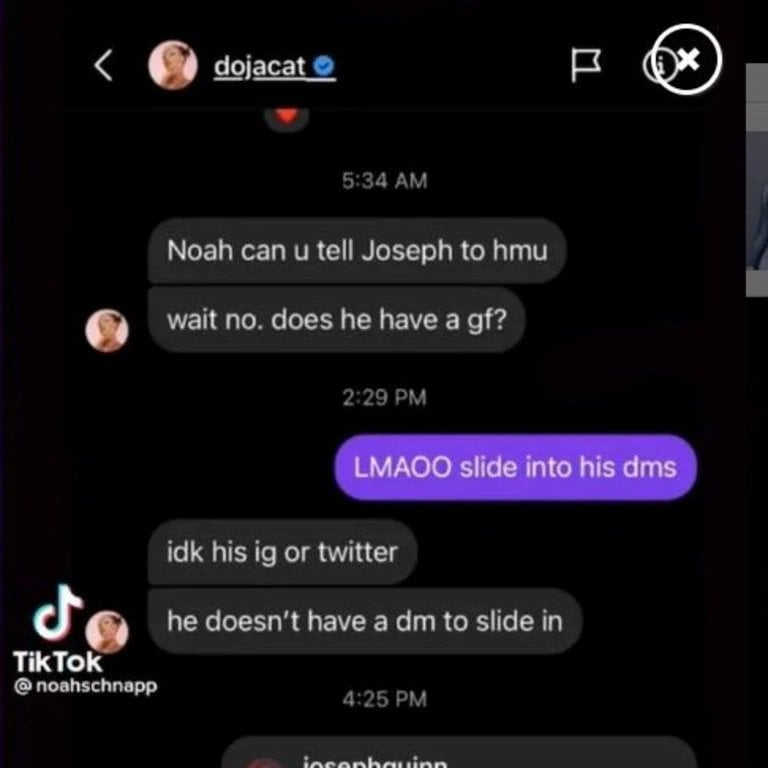 Days later - after Schnapp publically posted the exchange online - Doja Cat called him out for doing so.

"I’m just going to say something right now about the whole f***ing Noah Schnapp thing," she said during a live videostream.

Doja pointed out that people do "dumb sh*t" when they're young.

"You’re supposed to do stuff like that so you know you’re not supposed to do it in the future. I did my fair share of f*** ups so I don’t f*** up again."

But she still held the actor accountable, calling it "borderline snake sh*t".

"The fact that Noah went and did that, posted a private conversation between me and him is so unbelievably socially unaware and whack," Doja said.

"That’s like borderline snake sh*t. That’s like weasel sh*t. I’m not saying that encapsulates his entire personality — I don’t imagine him that way.

"Maybe he is like a whole snake, but I didn’t see him that way. I made an assumption he was gonna be chill about it and he went and shared information that I didn’t feel comfortable with him sharing."

Well, it turns out the internet wasn't all too happy with Doja's comments, with many claiming the rapper's words towards 17-year-old Schnapp were uncalled for. Others believed it was unfair and borderline inappropriate to message the actor for Quinn's Instagram handle in the first place.

the fact that doja cat went live and ranted for like 10 minutes about noah schnapps 20 second tiktok .. you are a grown ass woman. act like it. noah didn’t mean any harm, he was just joking. it’s never that serious.

As a result, fans showed whose side they were on when it was revealed last week that Doja's Instagram follower count had fallen to 24.14 million (it was previously 24.34 million). All in all, 200,000 people unfollowed the performer.

While both Doja and Schnapp remained silent initially, the Stranger Things' actor has since made it clear they've buried the hatchet.

Taking to TikTok (the same app he called out the rapper on, funnily enough), he posted a video on Wednesday with Doja's 'Kiss Me More' playing in the background.

In a comment under the clip, Schnapp wrote that there were "no hard feelings" between the two. "Guys everything is all good I apologized (sic) and I still follow her and love her music no hard feelings."

He doubled-down on his apology in an interview with Variety - where he also confirmed that his Stranger Things character Will is gay and in love with best friend Mike - when asked about the snafu.

"Yeah, I mean, look, I’m super unserious on social media and pretty goofy, so I posted that not thinking too much of it, but obviously it hurt her feelings," Schnapp told the publication.

"So, as I should, I apologized and she was totally okay with it, and was like, 'I’m sorry how I reacted.' It was all good. I love her. I’m like the biggest fan of her music, and I told her that. I was like, you’re literally my role model. It’s all good.

"People make such a big deal out of everything when it’s on the internet, but, like, in reality, it’s like a two minute thing."

And there you have it.

We can now call a close on what many would argue might just be the most bizarre and unpredictable celebrity beef we have ever seen.

This article was published on July 9, 2022 and has since been updated with new information.