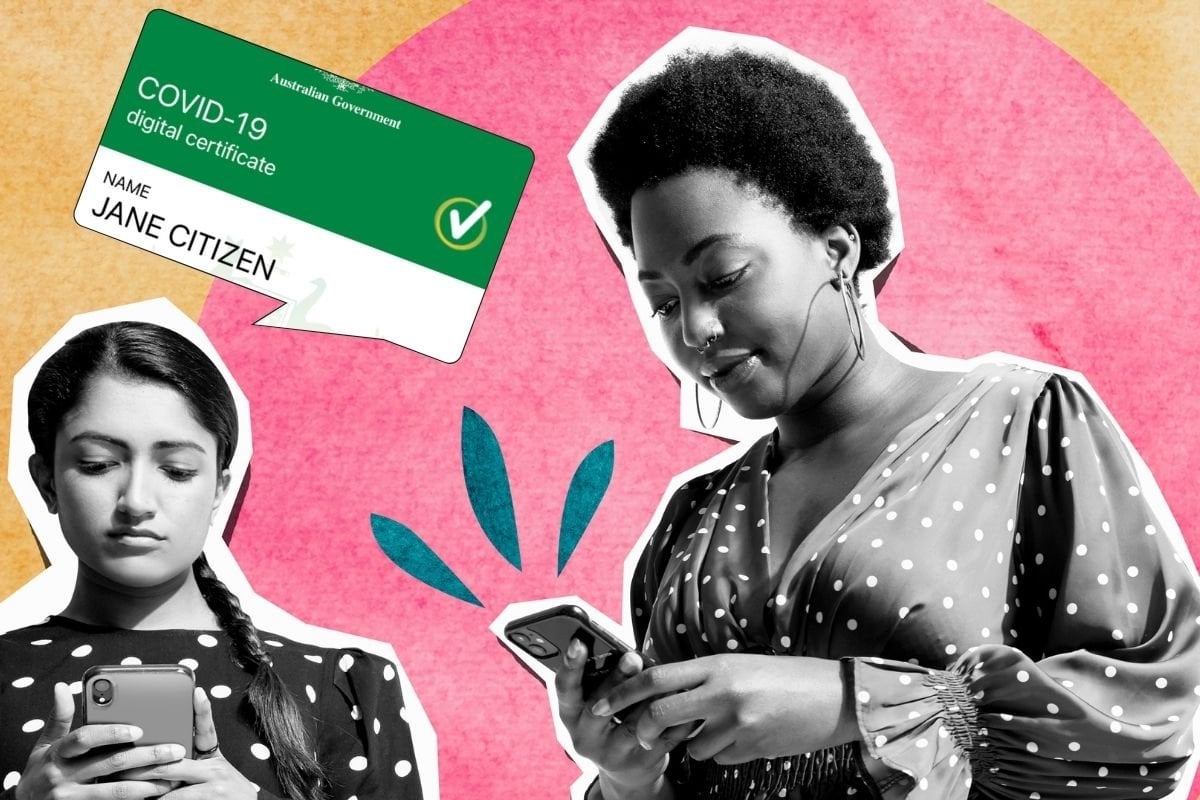 Chances are you've been hearing the phrase 'vaccine passport' cropping up more as our vaccination rates finally start to (slowly) pick up.

Places like the UK and the EU are in the infancy stages of rolling out their own versions, while Israel has had one in place since March 2021.

We already know that the Federal Government plans to bring something similar in for Australia, and we're being drip fed details as they formulate how it'll work.

What is a 'vaccine passport'?

You'll see the phrase 'vaccine passport' being used in the media because, frankly, it's a little more exciting than what the government is actually referring to it as: a vaccination certificate.

When you receive a COVID-19 vaccination in Australia, it's logged in your MyGov account. So we've already got the mechanics in place; those getting the jab already have a certificate. It automatically generates after you've received your second dose and are fully vaccinated. 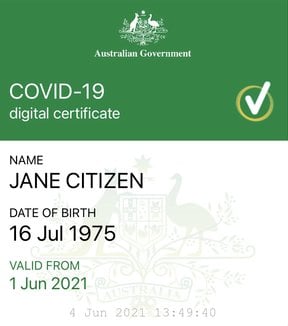 Once you've had both doses, the certificate will automatically generate. Image: Australian Government.

However, your Medicare must be linked to your MyGov before the certificate can be accessed.

As Tourism Minister Dan Tehan told Mamamia's news podcast The Quicky, "My expectation is a vaccination certificate, I think, will be a key part of Australians' ability to be able to travel. When people do travel, they will be asked by countries they're travelling too, to show proof of vaccination. So that's why having a proof of vaccination certificate will be a critical part of your ability to travel once we're able to travel freely again.

Unlike a hard copy passport, which we already require entering other countries, this 'passport' will be digital, downloadable to your smartphone, and free.

But how will it work domestically?

While most experts agree a passport or certificate makes sense internationally given we've already got a passport system in play, domestically is where it gets more complicated.

In France, a 'health pass' has been introduced for all events or places catering to more than 50 people. This month that's being extended to cafes, shopping centres and restaurants.

From September, the UK will require proof of full vaccination before entry to nightclubs and large crowd events via the NHS COVID Pass App.

It looks like we'll also be bringing it in for those 'bigger' event style gatherings. As Minister Tehan explained, "if you wanted to go to a concert, or the theatre or a sporting event and it required proof of vaccination, then you would use your vaccination certificate to be able to get access to that event. That's the way it's envisaged that it would work. It wouldn't be expected that this would be a requirement in crossing borders. It's more about being able to use it to identify having had the vaccine for events."

As you can see below, the cricketing world is already looking into it.

“That’s something the whole of the event industry is looking at really carefully. We all want to get back to major live events as quickly as possible, in a safe manner and in a way that gives the public confidence." | @danbrettig https://t.co/PpGCYMYeiO

When will we see a 'vaccine passport' introduced?

When 70 per cent of the population is vaccinated.

According to the Federal Government's transition plan which was announced on Friday, that's when we'll enter 'Phase B' and one of the measures included in that step will be, "eased restrictions for vaccinated residents."

Right now that feels unfair, because there are still millions of Australians who aren't eligible for their preferred vaccine. However, that's also being taken into consideration with the above phases.

Prime Minister Scott Morrison is confident that by Christmas, every Australian who wants to be vaccinated, will have had access.

As Dan Tehan told The Quicky, "before Christmas" is when they're also speculating we might be ready to enter Phase B. As you can see, both goal posts match up.

Listen to The Quicky's deep dive into 'vaccine passports' below. Post continues after podcast.

Phase B is also when the government plans to "increase inbound traveller arrivals especially for vaccinated residents."

We won't be ready to scrap caps altogether until we reach Phase C, when 80 percent of the country is vaccinated.

All of the above will require 'proof' of a vaccine, which we will just do via our phones. It'll likely be as short and sweet as the QR code check in businesses currently have in place at their front doors.

What are the concerns?

So we've tackled one of the main concerns which is "but I am not eligible for the vaccine, does that mean I miss out on the special privileges??" And no, you won't, because the passport isn't going to be brought in until we're all eligible.

One of the other main concerns cropping up, is fear that the system will create a 'two-tier system' relegating those who don't want to, or can't get vaccinated into second-class citizens. 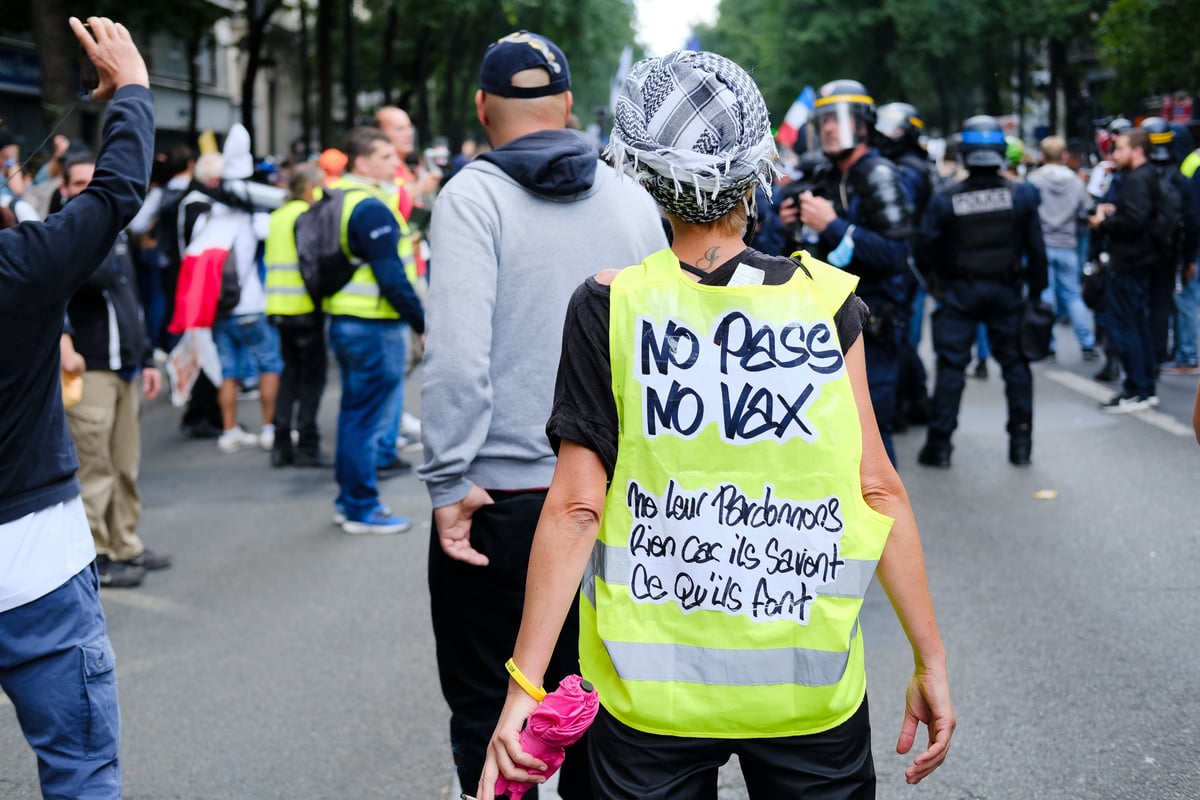 France has protested three weekends in a row against their country's 'health pass.' The demonstrators believe it's creating a 'segregated society.' Image: Vincent Koebel/NurPhoto via Getty.

As tourism expert, Associate Professor Pierre Benckendorff explained to The Quicky, these systems aren't about punishment, they are about reward. And here in Australia it is free to get a COVID-19 vaccine, it's not something that's only for the rich, which is the argument that's currently being levelled at the government about who they choose to allow through the inbound cap limits.

We also already have systems like this in place to keep track of childhood immunisations; No Jab No Pay and No Jab No Play for family benefits and childcare access.

It's not about creating a 'first class' and a 'second class' citizen. It's about creating a safe space and putting policy in place that ensures we can make that happen in certain environments.

The other main argument is that it's an 'infringement on personal freedoms'.

When asked about this concern on The Quicky, Dan Tehan replied; "No one is required to get vaccinated. But what is absolutely evident and all the medical expert advice points to this, is that the best way we can keep everyone safe in our community is for everyone to get vaccinated and as we progress and there are mass events where it is a lot safer for the community for people to attend if they've been vaccinated, then that's something that the government [and] event organisers are going to have to look at. Because ultimately it's the best way to keep our community safe."

What that boils down to is this: a passport or 'certificate' will actually give us back our freedoms not take them away. Without it, we are back where we are now in a continuous cycle of lockdowns. If we can make sure that gatherings are protected, we don't have to live like we are now, constantly bracing for cancelled plans.

If you decide the vaccine isn't for you, (and you are not medically exempt), you are in fact infringing our personal freedoms, because we will have to remain locked in and locked down for longer, in an effort to protect you.

Read: How to have a conversation with someone who is vaccine hesitant.

Is the government just using this as a carrot to make us get vaccinated?

Well yes, but as the 'chicken and the egg' argument goes; we can't move around more freely until more of us are vaccinated.

So yes, telling the Australian public that those who get vaccinated will be able to use a certificate to move more freely is inadvertently acting as an incentive to get it. But it's also necessary. How do we make sure we can hold Blues Fest or NRL games without the constant threat of cancellation hanging over us? We make sure the cohort of people attending are protected.

#BREAKING: A Queensland health chief has confirmed that the remaining NRL games this weekend are cancelled, as the state grapples with new cases of Covid.https://t.co/4p2OS8Vkx2

While a 'vax lotto' or Labor Leader Anthony Albanese's plan to give every Aussie who rolls up their sleeve $300 are just plain incentives, the vaccine passport is more than that. It's the next logical step to freedom.

How long will we have to use the passport?

Believe it or not, one day COVID-19 will not control our lives.

As infectious diseases physician and microbiologist Associate Professor Paul Griffin told The Quicky, "While there's a lot of talk that this [COVID-19] will become endemic (a virus that circulates in the background), influenza has obviously been an endemic virus forever. We see pandemics from that, we adapt accordingly and have a response and this will be the same. It probably won't go away, and we'll have cases all the time or seasonally every year, but we'll be able to respond. We've got great vaccines already, we're getting improved vaccines coming through - the so called 'second generation' vaccines. We're getting new therapies, at the moment we don't have much we can do for people when they are infected. But that's going to change. So I think we'll look back and wonder how we got through this without all the things we'll use to keep it under control long term."

There's no predicting how long all of that will take, but we do have plenty of case studies to learn from thanks to the rest of the world being further along the journey than we are.

In Israel, they scrapped their version of a 'vaccine passport' as cases declined in the country and vaccination levels remained high. It wasn't needed anymore. Recently, they had a resurgence, so they reinstated the pass from July 29.

Right now in Australia, when we have a resurgence we lock down entire economies. It's a really exciting prospect that one day we will just have to reinstate digital certificate check-ins instead.

But no, once we get to that 'looking back in wonder' point in the future that Associate Professor Paul Griffin talks about, vaccine passports won't be part of our everyday lives anymore. And neither will COVID-19.

Reply
Upvote
2 upvotes
Could it not just be referred to as a vaccine certificate if that’s what the government will be calling it? Sure it sounds better calling it a vaccine passport, but I think it just creates more confusion.
C
cat 9 months ago

Reply
Upvote
@kate h passport is accurate, it will be needed for international travel for years. And as variants develop and there are vaccine boosters issued it will most likely also be relevant for interstate travel for quite a while.
M
michael 9 months ago

Reply
Upvote
I've had my vaccine passport for a month or so now. Still waiting for some benefits.
C
cat 9 months ago