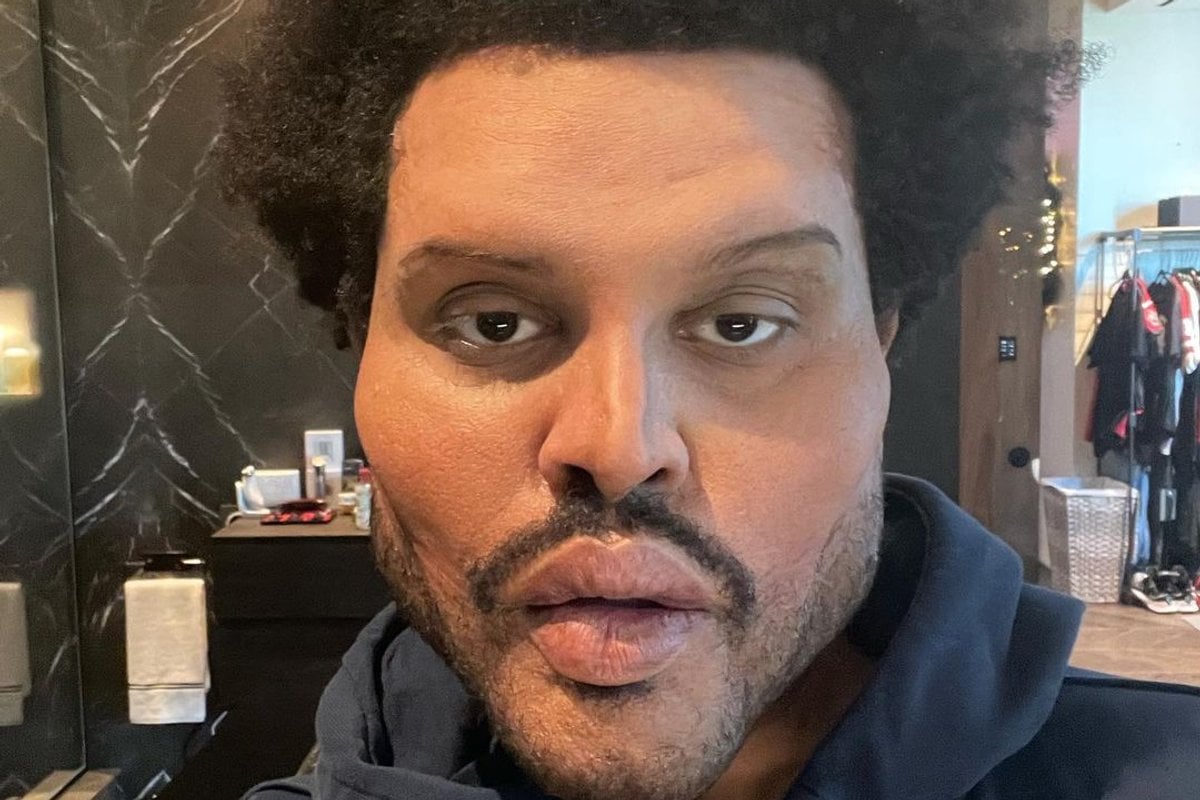 On March 20, 2020, The Weeknd released his highly anticipated fourth studio album, After Hours.

It was the mark of a new era for the 30-year-old singer. An era that involved a brand new character.

Since After Hours was released, The Weeknd, whose real name is Abel Makkonen Tesfaye, has been seen wearing disturbing makeup at his public appearances.

At the Video Music Awards in August, the singer appeared battered and bruised, sporting a cut lip and two black eyes. The singer also wore similar makeup for his Saturday Night Live performance in March. 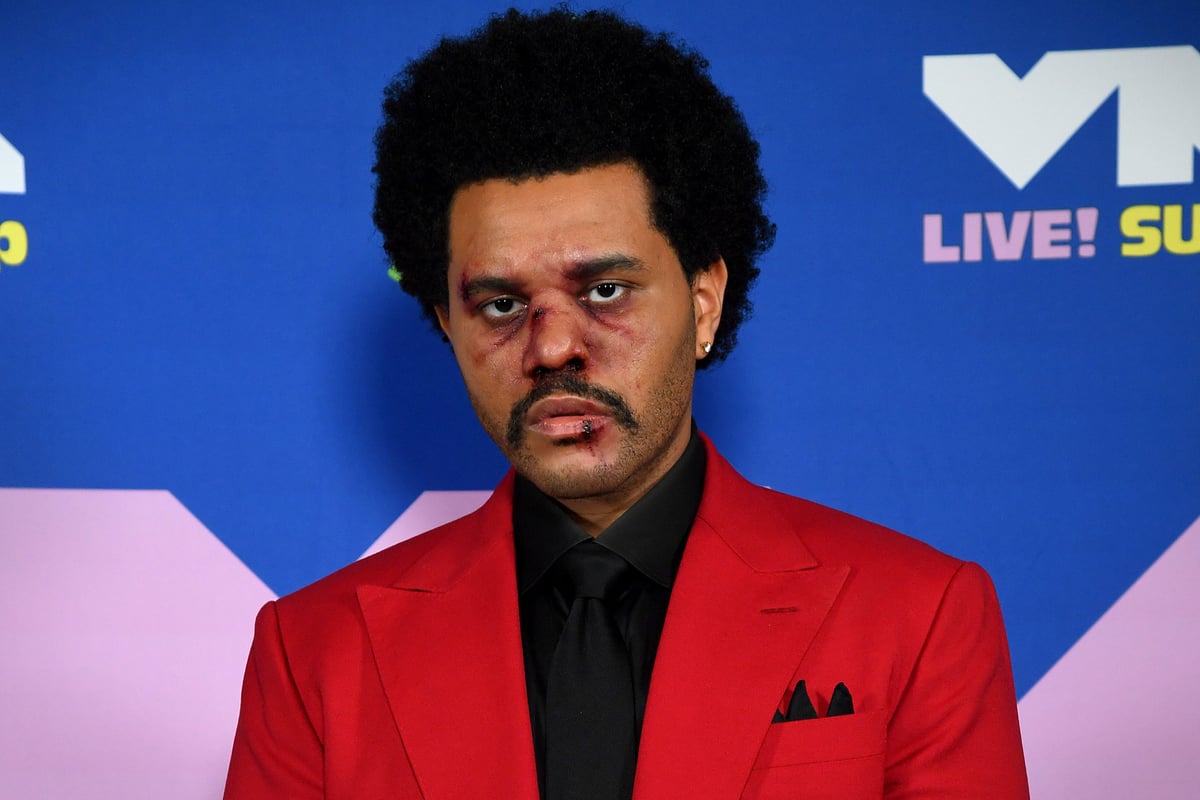 The Weeknd at the Video Music Awards in August 2020. Image: Getty.

Then, at the American Music Awards in November, The Weeknd's "injuries" escalated even further.

During the awards show, the 30-year-old performed two singles from his new album, 'Save Your Tears' and 'In Your Eyes', while wearing full facial bandages. 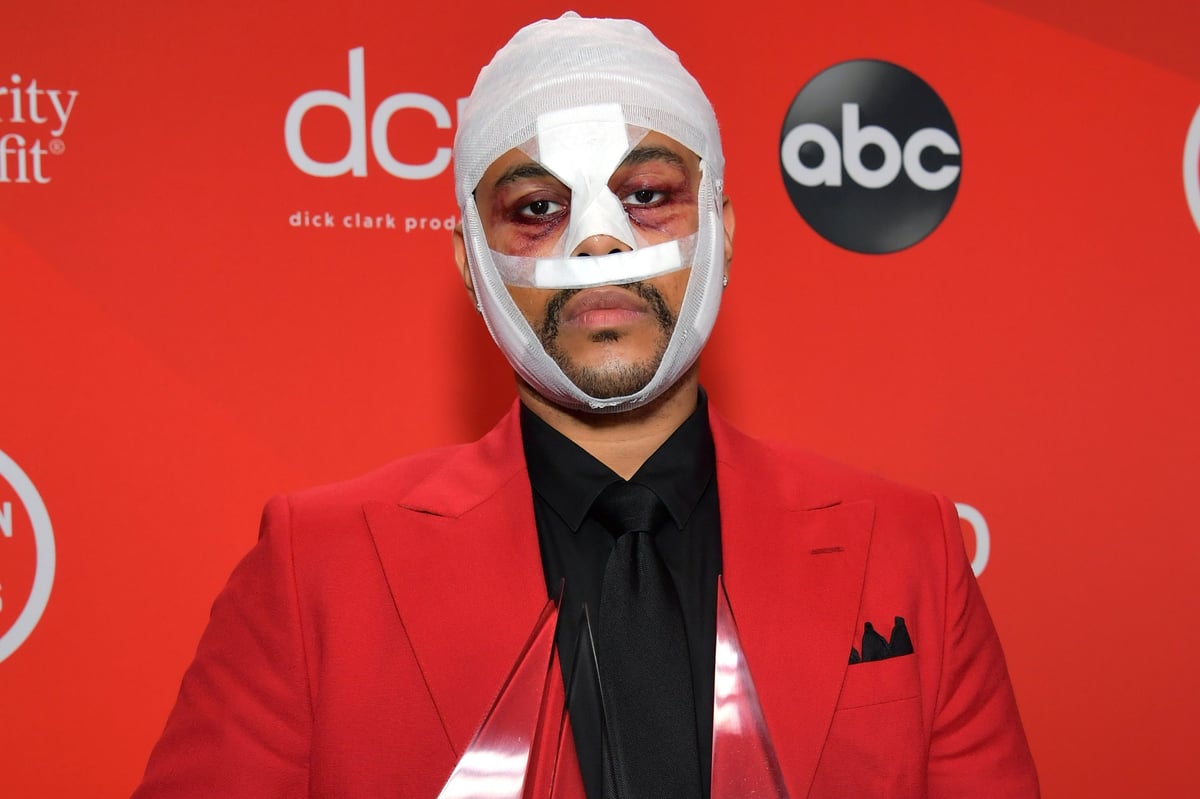 The Weeknd at the American Music Awards in November 2020. Image: Getty.

Now, The Weeknd has unveiled the final step of his transformation. And yes, it involves 'Instagram Face'.

Wait, why is everyone talking about The Weeknd's face?

On January 5, The Weeknd released the music video for his latest single, 'Save Your Tears'.

In the four-minute video, the Canadian singer dances around a ballroom while looking almost unrecognisable.

Watch a clip from The Weeknd's new music video below. Post continues after video.

After unveiling his bandages, the singer is now sporting a new look involving dramatic prosthetics that mimic the appearance of severe plastic surgery.

While some viewers initially believed The Weeknd's transformation was real, makeup artist Mike Marino of Prosthetic Renaissance has confirmed that the look involved prosthetics.

"Check out the weird plastic surgery make up we did for The Weeknd," he wrote on Instagram.

What has The Weeknd said about his transformation?

In recent months, The Weeknd, who is notoriously private, hasn't shared much about his transformation.

In an interview with CR Men last year, the singer explained that he wanted to share a new side of himself amid the release of After Hours.

"I feel confident with where I'm taking this [new] record," he said.

"There's also a very committed vision and character being portrayed and I get to explore a different side of me that my fans have never seen."

But speaking to Variety in the lead up to his Super Bowl Halftime Show performance, the singer has finally explained the meaning behind his transformation.

"The significance of the entire head bandages is reflecting on the absurd culture of Hollywood celebrity and people manipulating themselves for superficial reasons to please and be validated," he explained.

"It’s all a progression and we watch The Character’s storyline hit heightened levels of danger and absurdity as his tale goes on."

In a song from The Weeknd's latest album, 'Escape From LA', the 30-year-old sings that all "LA girls look the same" because they all get "the same work done".

After The Weeknd unveiled his 'new look', fans shared their reactions on social media, with many comparing the singer to "Handsome Squidward" - a viral reference to a SpongeBob SquarePants episode in which Squidward undergoes surgery and emerges with a new face.

this is very fascinating to me, the weeknd really told a story this era pic.twitter.com/6Ha1RbjB5q

Me when I saw The Weeknd’s face pic.twitter.com/th5Fmq7u6s

The Weeknd better bankrupt whoever did this to his face 💀 pic.twitter.com/p8oPPp2xF6

The Weeknd pulling up with handsome squidward face pic.twitter.com/TaDvIptTzD

But more than anything, fans questioned whether The Weeknd's new look was a dig at his ex-girlfriend, model Bella Hadid.

"The Weeknd is definitely bashing Bella Hadid with the whole plastic surgery themes," one fan wrote.

"Is The Weeknd trying to look like Bella Hadid?" another said.

IS THE WEEKND TRYING TO LOOK LIKE BELLA HADID BC I CAN SEE IT 😭 pic.twitter.com/w8oi5bFPet

The model has famously been the target of plastic surgery rumours throughout her career, which she has denied — and her appearance has been influential to the so-called 'Instagram Face' trend.

Although it's unclear whether The Weeknd's transformation is a nod to Hadid, there are some possible references to the model in the single 'Save Your Tears'.

In the song, The Weeknd sings: "I saw you dancing in a crowded room / You look so happy when I'm not with you / But then you saw me, caught you by surprise / A single teardrop falling from your eye."

Some fans have questioned whether the lyrics are a reference to Hadid, as The Weeknd had a run-in with his ex-girlfriend following their split, at Catch One nightclub. After The Weeknd arrived at the club, Hadid reportedly left. 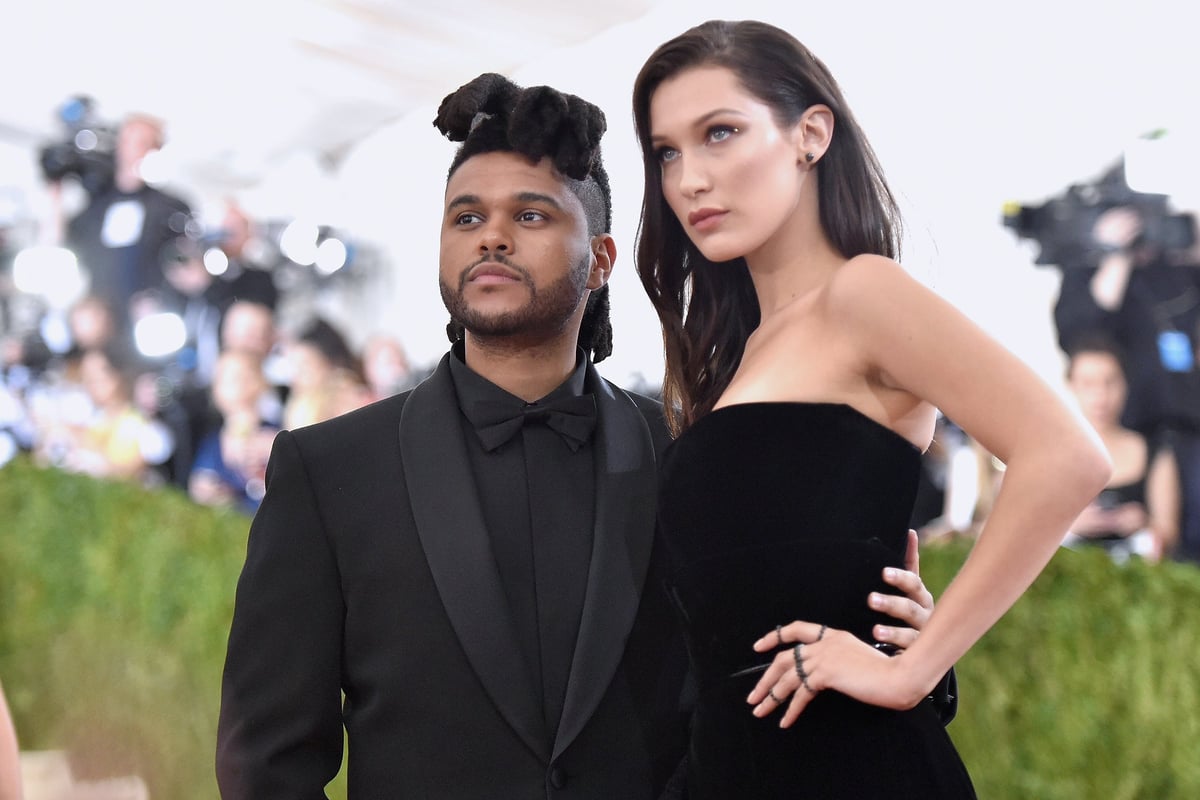 The Weeknd began dating Hadid in April 2015. They later made their first public appearance in February 2016 at the Grammy Awards.

"It was a big night for him. He has worked so hard, and he did so well that night. As a girlfriend I wanted to be there to support him. Seeing him so happy when he won a Grammy made me so happy," Hadid told Glamour at the time.

In late 2016, the couple split amicably.

The Weeknd and Gomez dated for just 10 months. Soon after, the singer was spotted in New York City with Hadid.

The couple officially started dating again in April 2018, before separating in August 2019.

The Weeknd will perform at the Super Bowl Halftime Show on February 8, 2021. The Super Bowl will be broadcast live on Channel Seven from 10.30am AEDT.

This post was originally published on January 9, 2021, and updated with new information on February 5, 2021.

Reply
Upvote
1 upvotes
I don't know what "Instagram Face" is (and I don't think I really care to know). Not really sure why someone cosplaying having plastic surgery and cosmetic enhancement would be implied to be a dig specifically at Bella Hadid, though. Countless women do the same thing (though may be more truthful about it than Hadid!).
C
cat a year ago