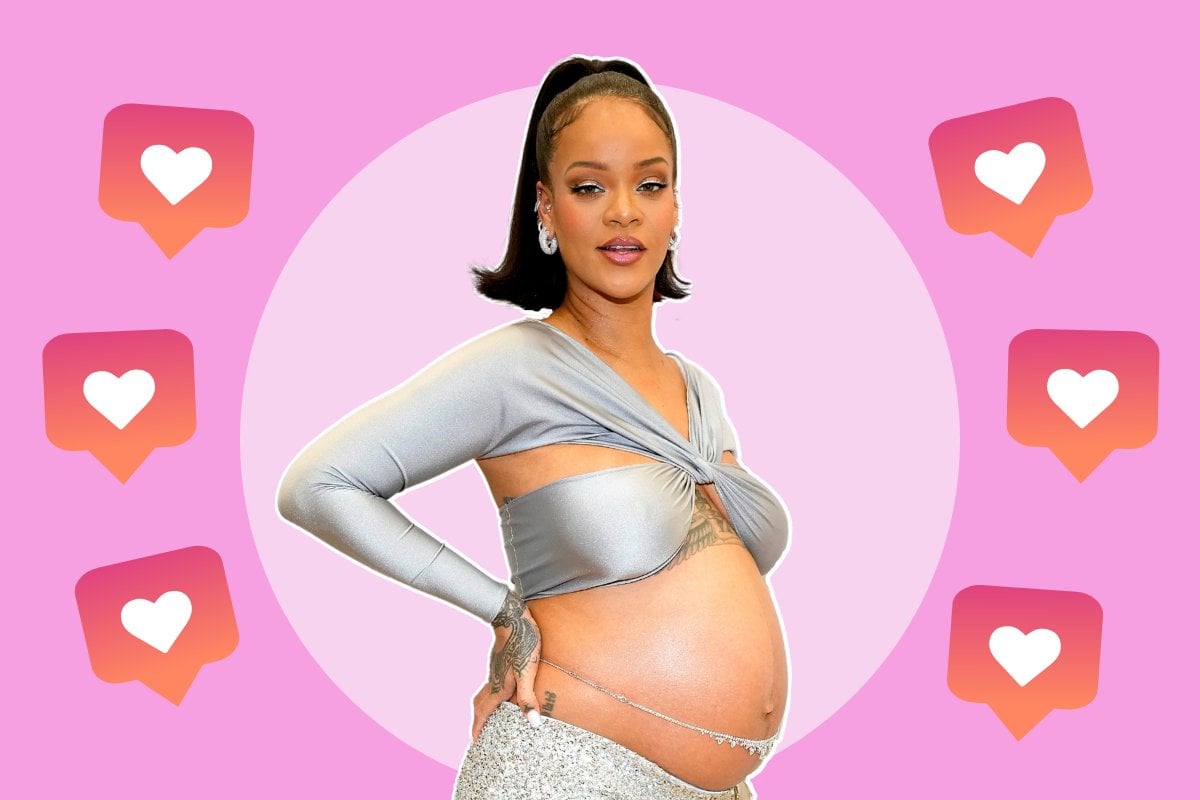 On April 14, the internet's so-called 'messiest fashion influencer', Louis Pisano, hit send on a tweet they shouldn't have.

"Rihanna and A$AP Rocky have split. Rihanna broke up with him after she caught him cheating with shoe designer Amina Muaddi," they wrote.

The 'news', which came out of nowhere, sent everyone into a tailspin.

Rihanna is an internet darling, a pop culture icon and is currently heavily pregnant with her and A$AP Rocky's first child. The idea that her boyfriend could cheat on her just days out from giving birth was the perfect storm for a viral internet rumour.

So, of course, it took off. It didn't matter that it was completely unverified, with not even a smidge of evidence.

There were memes, reaction tweets, TikToks and more. Mainstream publications picked it up. It didn't take long for Page Six to publish a rebuttal of sorts, sharing quotes from a number of sources who claimed the information was "100 per cent false".

It wasn't until a while later, after Amina called it "an unfounded lie" and after Louis apologised via their Instagram story, that people truly believed that it wasn't true.

As it unravelled, it reminded me a lot of a 2021 rumour about an affair between Kanye West and beauty guru Jeffree Star, masterminded by TikTok user Ava Louise.

"A lot of people in the scene have known for a while," Ava claimed.

Well, no. They hadn't. It was not true at all, not that the jokes, memes and search for 'receipts' cared. 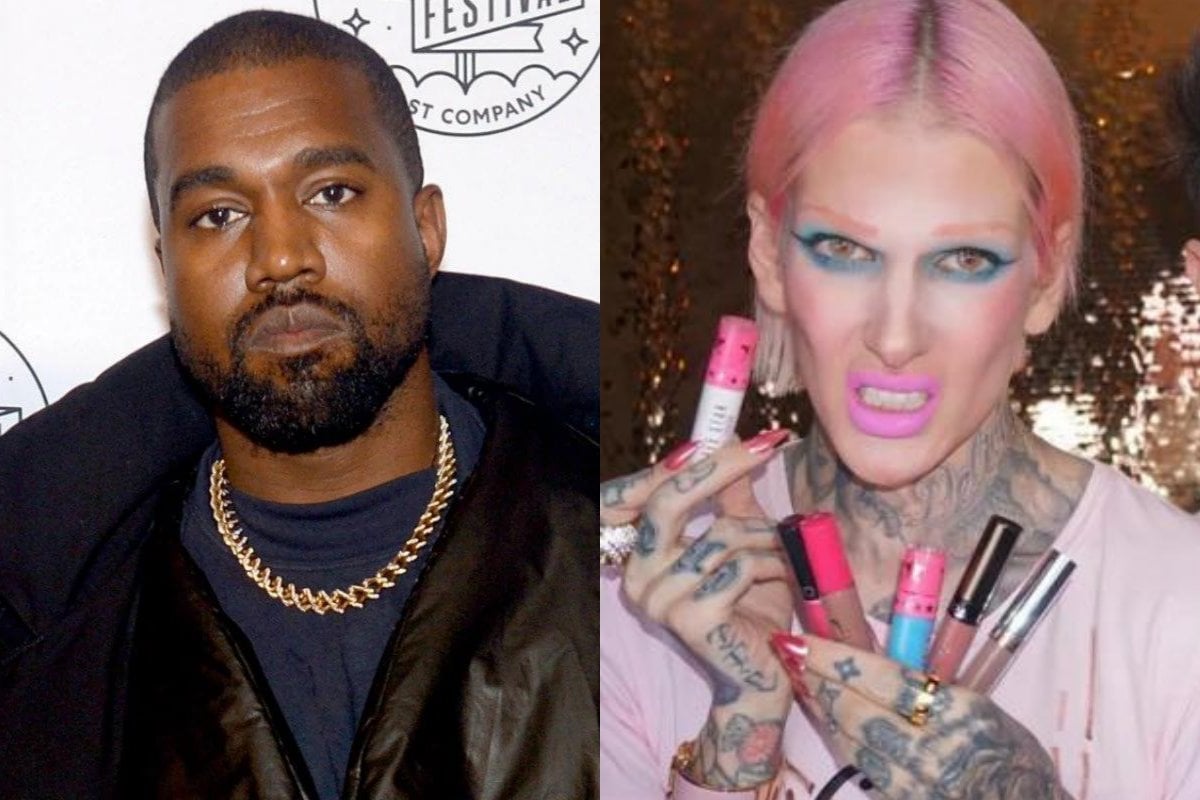 (Ava first entered the public consciousness in 2019 when she appeared on Dr Phil to discuss her Instagram addiction, admitting that her main goal in life is "to become Insta-famous". She later went viral when she licked an airplane toilet seat for a TikTok 'coronavirus challenge' in 2020. She now has more than 400,000 IG followers, proving dreams really do come true.)

There was also 2021's less problematic rumour about Chris Evans and Selena Gomez dating, which was concocted entirely by fans who noticed Chris had recently followed Selena on Instagram. The lie spread so far that the pair, who may have never even met, were Google's 10th most searched 'celebrity pairing' of 2021.

These situations are becoming increasingly common because in recent years, the celebrity gossip landscape has changed drastically.

When the world shutdown and we found ourselves with little else to do but sit on our couch watching Tiger King and scrolling Instagram, Deuxmoi, an account sharing gossip, celebrity sightings and industry secrets took off. 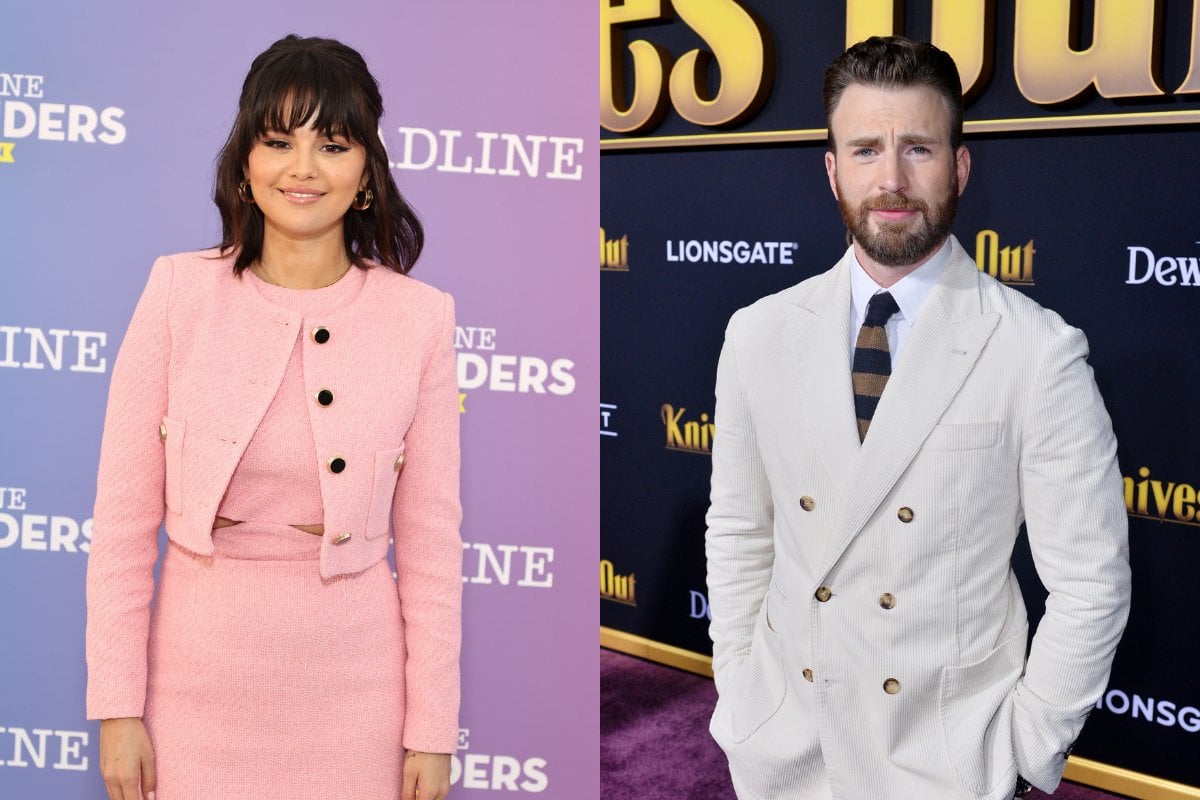 We don't know if Selena Gomez and Chris Evans have ever even met. Image: Getty.

Initially a fashion blog run by two friends, it was in these early pandemic months that one of the account owners asked their followers to share stories about celebrities. And well, with plenty of blurry photos, stories of Owen Wilson being a menace on a bike and restaurant recommendations in between, now we find ourselves here: where Deuxmoi, with its 1.4 million followers, is synonymous with celebrity gossip.

Deuxmoi - and its many copycats - have democratised celebrity gossip, and its younger sibling: the blind item. Now anyone can contribute to the discussion.

If someone shares a story about how Henry Cavill was a bit mean when they met him, that *insert A-lister here* is cheating on their partner, or that Drake is a bad tipper, dozens of others can share their own experiences or thoughts. And then, as readers, you can make your own mind up.

On one hand, that's cool. It allows followers to learn mundane, yet strangely interesting, 'tea', like what Nicole Kidman orders at Starbucks and the aforementioned tales of Owen Wilson almost running multiple people down on his bike. These are fun tidbits you wouldn't see on the front pages of a traditional tabloid.

But the issue, perhaps, with the 'democratisation' of gossip is that, just like political democracies, anyone can throw their hat in the ring - experience, knowledge or truth be damned - and enjoy an air of legitimacy simply because of the stage they stand on.

Most of these accounts offer frequent disclaimers about how they don't verify their information. With a critical eye, a lot of the 'blinds' read as fanfiction, or direct from a publicist trying to drum up interest in their client. It's become a bit of a game within certain fandoms to submit outright fiction about their favourite celebrity to see if Deuxmoi will publish it. 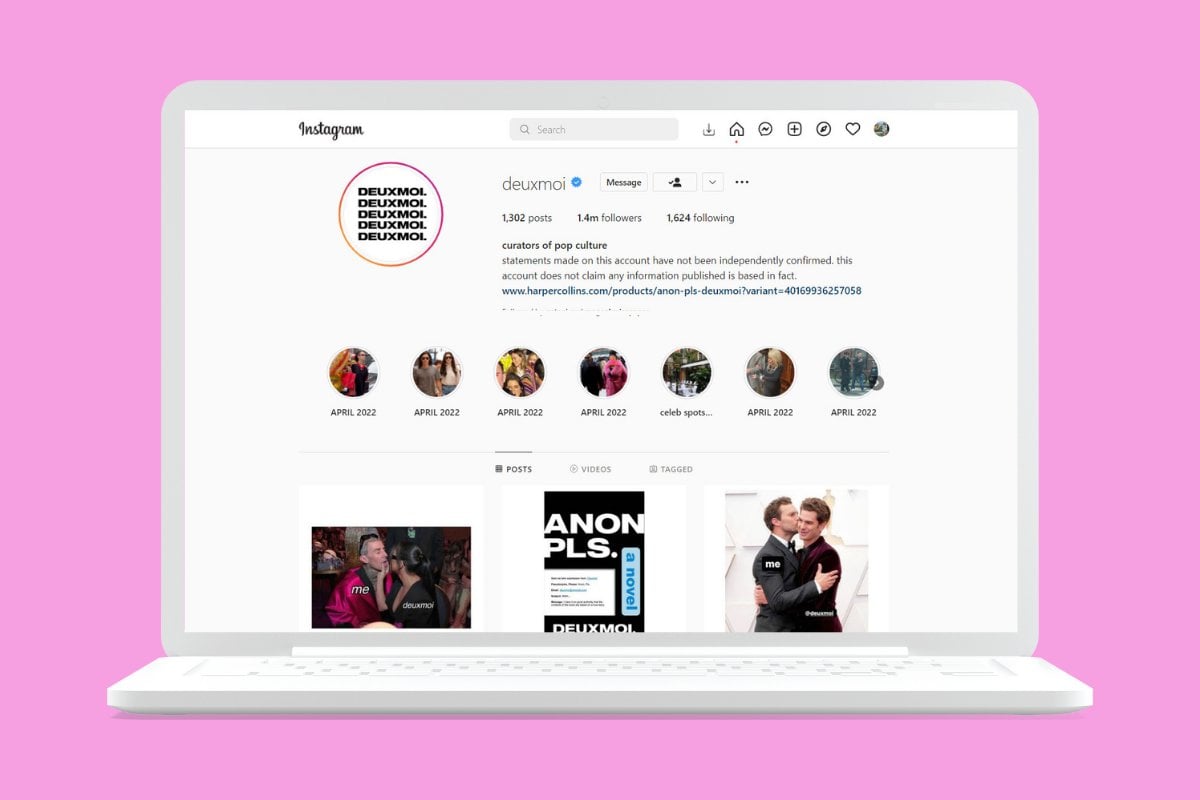 The red flags in these rumours don't stop them being disseminated around the internet - and probably in real life between friends and gossip hounds - like they're bible, giving them an air of validity they have not earned.

Celebrity gossip is a major business. It's lucrative as hell. We've all seen those magazine covers proclaiming Jennifer Aniston is pregnant for the 22nd time, because sadly, it sells. Helpfully, the genre is almost entirely unvetted, as most celebrities choose to ignore its existence unless they're doing the promotional rounds.

The Deuxmoi profile has done wonders for the mystery woman behind it: she has brand deals, merchandise, a podcast and a book deal she wouldn't have otherwise.

Outside of 'real world' money, her online coffers are bursting with online currency: clout.

I think that's the part that has become the most 'dangerous' (or as dangerous as something made up about very rich, powerful people we don't tend to have much empathy or compassion for can be).

It is the desire for clout that leads to incidents like Louis Piscano's Rihanna and A$AP rumour.

I don't pretend to know what Louis' motivations were, whether they made up the rumour or genuinely heard it from someone else. But I wager that the reason they hit send was for the clout.

What would Louis gain from sharing a rumour like this, professionally or personally? I'd argue there's very little offline justification for it. Online though, they can gain thousands upon thousands of engagements, followers and other forms of virtual validation (which, if this didn't blow up in their face, they could've then used for real monetary gain). 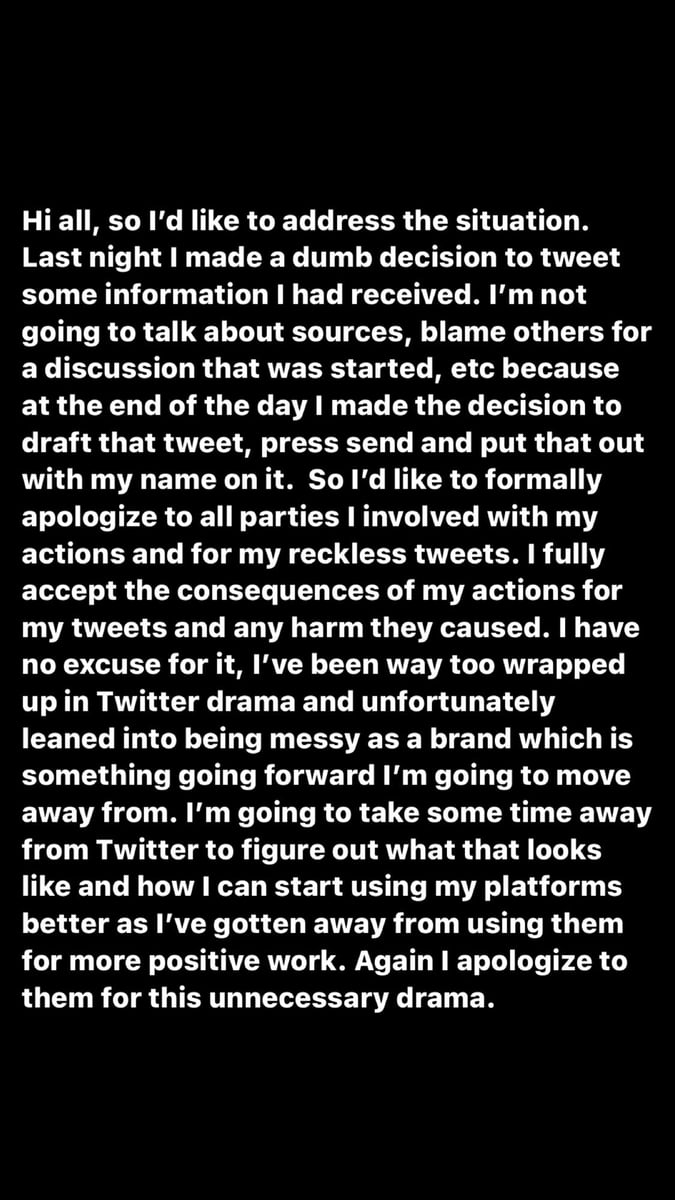 There is an abdication of accountability with pseudonymous accounts that perhaps non-anon gossipers underestimate. Deuxmoi is seen as an entity, and it feels harder to 'pile on' or hold something accountable without a human face, name and job.

After sharing their apology, Louis has gone quiet on the social media front. If or when they return, it will be interesting to see whether the truth vs clout scales tip in their favour like they have for previous fake-gossipers, like Ava.

I was hoping to come up with a solution while I wrote this, but I don't really know if there is a fix. We may have already jumped the gossip shark.

As long as there are celebrities, there will be celebrity gossip and those who love to read it (myself included!)

I guess the point is just that sometimes we should pause before we jump straight into the schadenfreude.