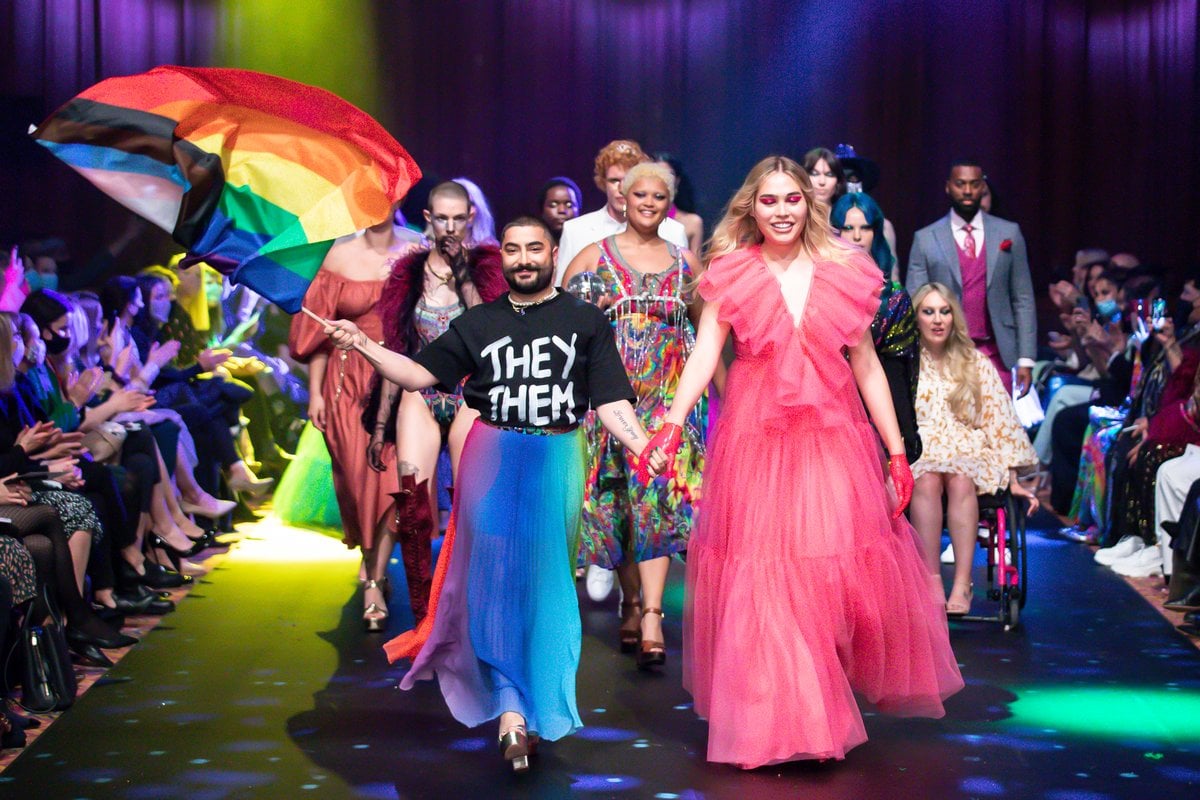 As a leading stylist, influencer and activist, Deni Todorovič only takes on projects they are passionate about.

The creator behind the popular Instagram account 'Style By Deni', whose pronouns are they/them, likes to say yes to opportunities that not only fill their cup, but have intention.

So when Melbourne Fashion Week approached them to style the opening night show and combine their two passions - fashion and activism for the LGBTQIA+ community - Deni jumped at the opportunity.

"This [was] literally my dream brief," the co-host of Mamamia's fashion podcast, What Are You Wearing?, said on this week's episode.

Listen to the episode here, where hosts Deni and Tamara share the behind-the-scenes secrets of Fashion Week. Post continues after audio.

The date of the show also lined up with Trans Awareness Week, and as a trans non-binary person, Deni saw this as the perfect moment to shine a light on trans visibility - they had already cast the trans model and content creator AJ Clementine to open and close the show.

"We [had] to do something. It would be weird not to," Deni said.

"I had this idea, it [was] going to be a Pride March moment," they explained. "Let's bring Mardi Gras to Melbourne and let's celebrate trans people in Australia."

And that's the vision Deni brought to life.

The show featured seven Australian designers, with styles by Camilla opening the show and a colourful finale that was staged as a glittering celebration of pride.

Deni wore their pronouns on a t-shirt while holding AJ Clementine's hand and waving the pride flag in the other, leading a diverse line-up of models and people cast for the show down the catwalk.

It was a groundbreaking moment - for those walking the runway, for those watching from the sidelines, and most importantly, for the trans community. 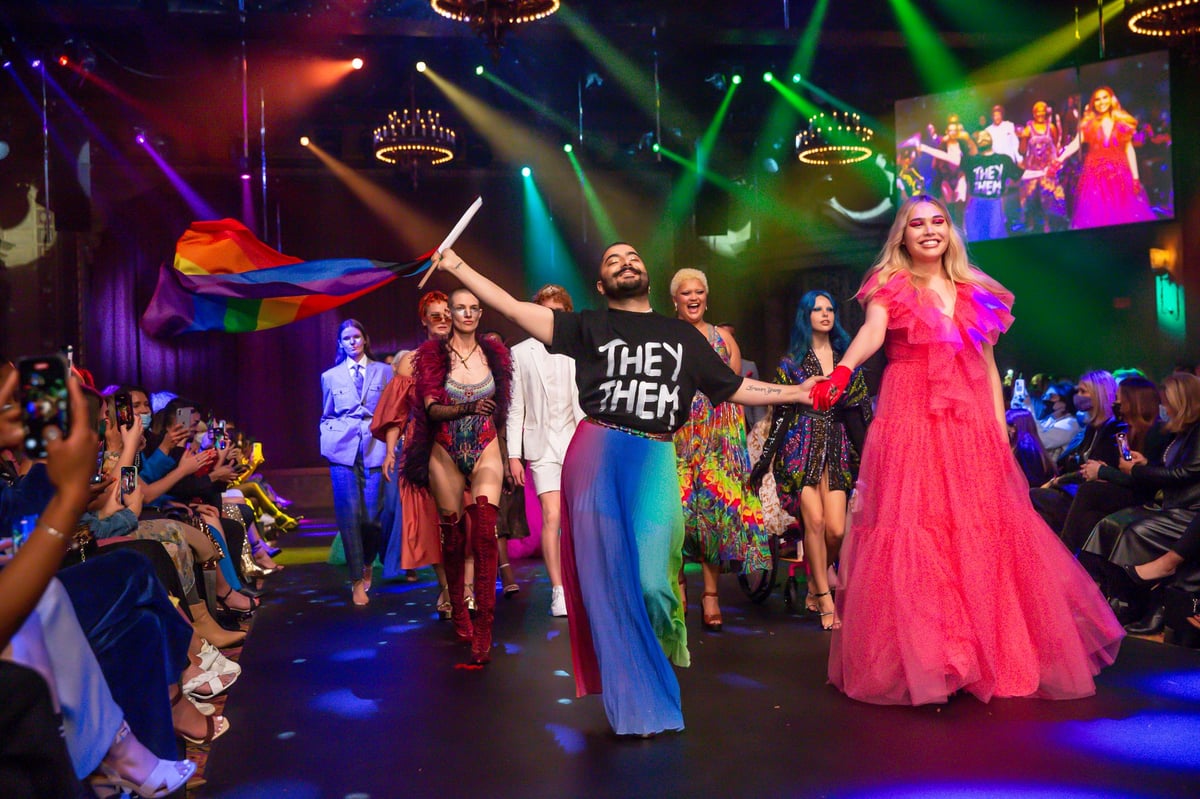 The finale of the opening show at Melbourne Fashion Week. Image: Getty.

"I'd been to many fashion shows in my life and it just felt different," Deni said, reflecting on the show.

"It was a beautiful celebration of love. And it was received that way on social media very much."

The piece slammed the fashion show, suggesting it was trying to push a trans narrative rather than focusing on fashion, and asserting that "Melbourne fashion week is meant to be about the designers".

The author reached out to 'fashion insiders', with one calling the stunt "the ultimate fashion faux pas", and shared claims that the finale left one designer "in tears".

Soon after, Deni issued a public statement on Instagram, apologising to the designers and explaining the concept behind the show.

"I am deeply sorry for anyone whose feelings I hurt, truly. However I will never apologise for using my platform to shine a light on those kept in the dark and provide a voice for the voiceless," they wrote in the post.

"I will never apologise for that finale feeling like the Pride march it was intended to feel like."

Speaking about the article on What Are You Wearing, Deni reflected on how it initially made them feel.

"It just really hurt me because it felt like... you know, fashion is this thing that has been my saviour," Deni said.

"I was that kid growing up in Geelong who had no friends, they were bullied so much because all they did was be a very gay little kid... and fashion was my escape, fashion was my shining beacon.

"So, then to be publicly shamed, by an industry or media [that ]I adore and this world that I love, it really hurt," they said.

Deni also reflected on what that negative commentary meant in retrospect.

"This is proof in the pudding that change is uncomfortable. Change can be icky," they said.

"Any kind of revolution or big movement throughout history has not come with a round of applause. They generally come with some kind of resistance. So, I will forever be proud of that moment.

"I feel so proud that we got that moment of visibility."

Beauty lovers! Complete this survey to go in the running to win a $100 gift voucher.

Reply
Upvote
Your show looks great. Well done!
I am surprised by the comment that ‘fashion was my saviour’ though. Fashion has always had a pretty dark side. There are so many issues ie exploiting child models,  engendering toxic body images that can lead to eating disorders, unsustainability, terrible working conditions for some in developing countries. It’s not an industry I’d like my children to go into.  Your fashion show looks like a rare ‘good news’ fashion moment rather than the norm.
M
mamamia-user-482898552 2 months ago

Reply
Upvote
@shauna020473 Yep, not to mention the inestimable damage the fashion industry has done through fostering a distorted perception, judgement and commodification of women's bodies.
C
cat 2 months ago

Reply
Upvote
@shauna020473 theres a dark side to every industry.
L
laura__palmer 2 months ago

Reply
Upvote
1 upvotes
@cat yes, but one has to admit that the fashion industry is an extremely toxic industry. Why gloss over the issues there with a whataboutism?
C
cat 2 months ago

Reply
Upvote
@laura__palmer I think its weird to hear someone say they love their industry and then launch into a list of things that are wrong with it. If someone said science was their saviour I wouldn't say "Id hate my kids to be a scientist, the atomic bomb was terrible".
M
mamamia-user-556745246 2 months ago

Reply
Upvote
4 upvotes
This is one of those stories where I get it but also I would have had no idea the Herald Sun had that shit article without reading this. feel like it doesn't deserve airtime. An article analysing the fashion of this show and then celebrating the parade style Deni pulled off would have got the positive story of the parade out without giving a voice to what seems like unfounded negativity. Also like "the fashion set said" this doesn't sound factual at all. Sounds like one person wrote an article and said "people are saying..." to back up their opinion.
M
mamamia-user-556745246 2 months ago

Reply
Upvote
1 upvotes
The Herald Sun has just annoyed me with their baseless negativity. I hope Deni blocks it out and feels proud
M
mustlovebooks 2 months ago